We're back! Did you have a good Christmas break? Get into that backlog, did you?

Yeah, me neither. Not to worry! Due to the awkward way the games industry and linear time interact, this week's selection is technically of 2018 vintage, so you're allowed to try them all without any anxiety or apologies to the other 73 unplayed games you'll totally get round to sometime soon, maybe next week. It's time to read about the very best stragglers among the many, many indie games released on Steam over the holidays. It's Unknown Pleasures. 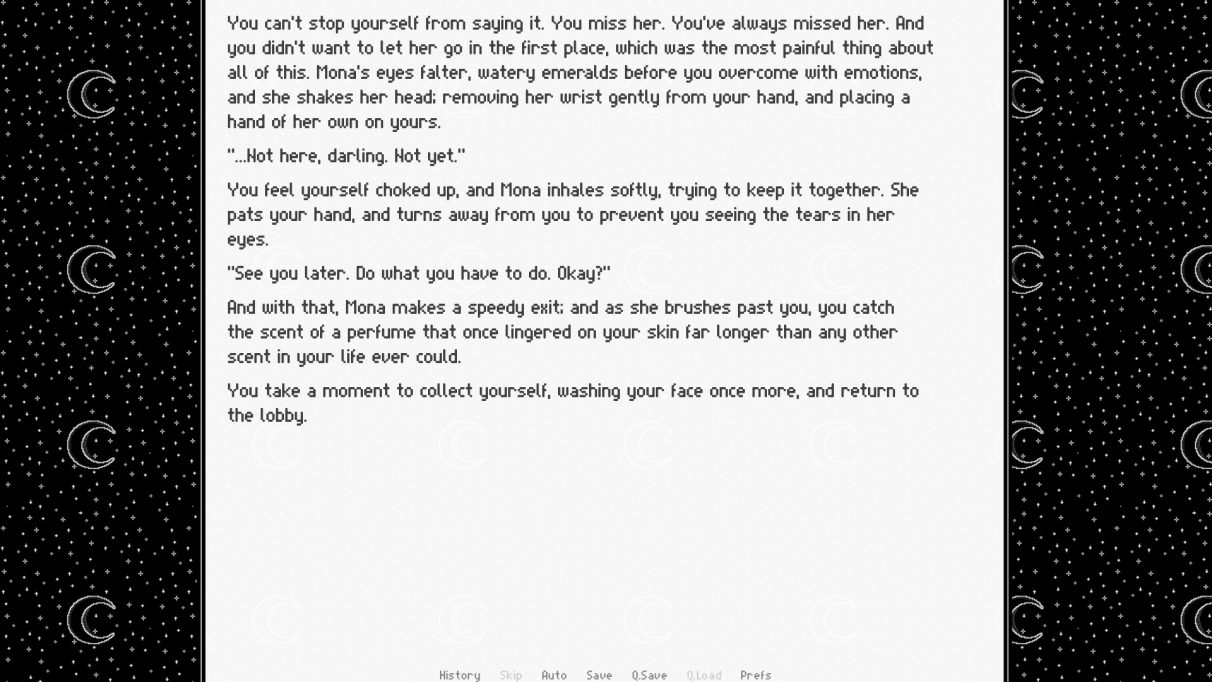 Goodness me, what a strange treat. I'm a big advocate of going into most games blind, and the gamblers among you might want to stop after this paragraph and take a punt: The Ghost of You is an interactive horror story about a group of musicians who are all gay women, because why not? Their orientation is not, as far as I can tell, a plot point. It simply is. There is also a lot of (until you read this) unexpected violence, blood, and death.

It's not sadistic, I hasten to note. Although the prose is very vivid and the events quite shockingly macabre, most of what I've seen so far is about the horror and mystery of what has happened. Worrying about staying alive, picking through a grisly aftermath - terrible things to heighten revulsion and apprehension, not to delight in gore and hurting people for its own sake. The sudden descent into violence and probably supernatural mystery is well foreshadowed, but still felt like an effective, earned shock compared to what happened before. The opening act in particular is all the stronger for focusing on the depressed, grieving state of the uh, memorably named protagonist Libretto, and her emotionally charged relationships with the rest of the cast. We get enough glimpses into their situation and history to put a blade on the threat when it emerges. And yes, this is very much my type of thing BUT I'm not all that into horror so it cancels itself out. That's how it works.

A nitpick: a minor edit here or there wouldn't go amiss. The editor in me noted a few extra phrases or slightly overdone sentences here and there. This is the work of a voice that deserves more confidence.

Few games open as dramatically or stylishly as Beholder 2. A monochrome, animated-series-Gotham city cast in rain and darkness, the streets neatly lined with silent people whose heads turn in unison to stare at you as you dash towards an imposing edifice to fix whatever terrible, sinister thing is happening. It's an excellent hook for a game that could otherwise be mistaken for a Papers, Please imitator. While it's very obviously a major influence, between this flash forward (I assume?) and some structural and narrative touches, there's a lot more going on here than just retreading that ground.

You're a newly-appointed clerk at the Prime Ministry; the all-encompassing bureaucratic force driving a totalitarian state. Your estranged father died there under suspicious circumstances, and you have no experience. Your guide is a bit odd but apparently a genuinely kind person who openly answers questions about his family and invites you to dinner. Everyone hints at the necessity of bribing around the guards. Merciless denouncement and framing are touted as acceptable career advancement techniques. A man claiming responsibility for your recruitment asks you to spy on certain things from within, but doesn't demand it. It's all very uncertain and exactly as contradictory as history suggests such a society and organisation would become. We've recently had another game that made a virtue of uncertainty and paranoia where many games make it an obstacle, and Beholder 2 boasts a novel style and atmosphere.

Structure? Oh, fine. People present questions and information to your booth, and your job is to direct them to the appropriate part of the bureaucracy. A man asking about extra food rations is a (1) request to the (2) ministry of social care in (3) Office 606. A neighbour suspected of distributing treacherous novels is a (1) denouncement to the (2) Propagan... no wait. Hang on, is that for the propaganda ministry or the cultural one? It's about art so... hmm.

I've actually made a living doing work like this, and it'll be familiar to anyone who's done certain kinds of customer service for a large enough organisation. Unlike Papers, Please, it's less about pressuring you into tripping up, and more about depicting the ordinary everyday lives of an extraordinary state until you could even be lulled into thinking it's not so bad. It's at once imposing and familiar. Your employer is very obviously evil but the workplace itself is comfortable. The sheer banality of evil is absolutely nailed, to the point where I was even enjoying the work. And the narrative promise of that introduction? Yes please. This could get very interesting.

Not, sadly, a Jetsons spin off where the family begin an armed insurrection, but with explosions like this any semblance of plot would be largely forgotten anyway. Jets'n'Guns 2 is a bright, loud, and colourful side scrolling shoot 'em up about blasting the absolute hell out of everything. Your customisable ship can take a few hits, and health power ups or recharging modules are fairly plenty, and you're really not expected to get through unscathed. The other lads, however, are pretty hosed.

Each level is fairly short but stuffed to the gills (at least one level lets you dive underwater too) with 'planes, blimps, buildings, and delightfully gung-ho little human goons who sometimes hurl themselves out of doomed ships or launch after you on jetpacks, waving their precious little rifles. Instead of the fully scripted geometric ballet waves you see in many such games, a pretty hodgepodge assortment of whatever the enemy has available fling themselves at you to slow your assaults, and just about everything explodes or collapses as little men run about panicking and you spray bombs and bullets all over their business.

A decent array of weapons and parts to buy, upgrade and rearrange makes replaying levels for higher scores (which mean more cash, though you only pocket the difference if you earn more, so there's no need to grind. You can replay all you like with new toys, though) even more appealing than the - very high quality - fireworks, and the bosses I've seen so far are terrific. Chunky technicolour robot hell machines designed by a supervillain who's clearly in it for the art. The third one, the techno-kraken, is an absolute sod. Which makes it all the more enjoyable when you go from desperately dodging between it hail of lasers and missiles, and systematically defang it. I can't think of a scrolling shooter I've enjoyed more.

Twin-stick shooters! A staple, and yet one where few leap out all that often. Most come in either pure horde management flavour (Smash TV, Galaxy Champions TV) or the more roguelike / dungeon style (Binding of Isaac, Hellmut), and though Gerty leans towards the latter, it has its own distinct feel.

Aliens have taken over somewhere or other. You're to teleport in and splat them. Each level is several times larger than the screen and obscured by fog of war, so exploration is needed to find the exit, plus any upgrade stations, treasures, or the precious... pinkium? Pinkium used to buy things with. Your way is also blocked by ice and rock, which both you and many brands of alien can dig through.

It's pretty great, really. Difficult, but only medium pressure. There are times of frantic, surprise-fuelled dodge-blasting and periods of relative calm to dig, explore, and pick off solitary beasties, but complacency is a major threat. You never know when a submerged tremor will burrow up and carelessly launch its young like a beauty pageant hasbeen, nor when a soldier will open up a tunnel somewhere off-screen, leading roaming monsters to your delicious, fleshy back. Staying too long in a leve ramps up the threat, and some are inescapable until you power up the exit. Well differentiated enemies, lots of unlockable upgrades, challenges, and a few different character classes round out a highly playable, polished, and strangely refreshing shooter.

There are several tones of puzzle game that you'd probably recognise. There's your hostile, taunting sort. There's the floaty, vague minimalist type that probably involves harps at some point. And there's your cheerful, bouncy cartoon sort. The latter is the default for all manner of mass produced budget puzzlers, to the point where one can be too wary of the taint of shovelware and miss out on some fun little toys.

Briquid is one of those. It's so simple that describing the concept would take longer than figuring it out with random clicks, but here we go: click on an empty square to fill it with bricks. Click on a brick square to empty it. Press an arrow key to push gravity in that direction. Use all three tools to move some water to the marked area(s).

Simplicity really can go a long way, and Briquid's levels are a decent mix of tricky, ego-massagingly easy, and maddening because somewhere, you can tell your subconscious has already figured this one out, but is still refusing to talk to you, unless it's to invent a song about bees, or periodically remind you of that stupid thing you said back in 2002.

You get 100 levels plus an editor, and the simple sounds and animation make it mildly satisfying to play even when you're getting it wrong. Netherlandsland-based developers Gamious are no strangers to the Pleasuredome, with one of their small but high quality mobile ports taking pick of the week during our Meer incarnation. Have they done it again?

No. This time, the pick of the week is The Ghost of You. 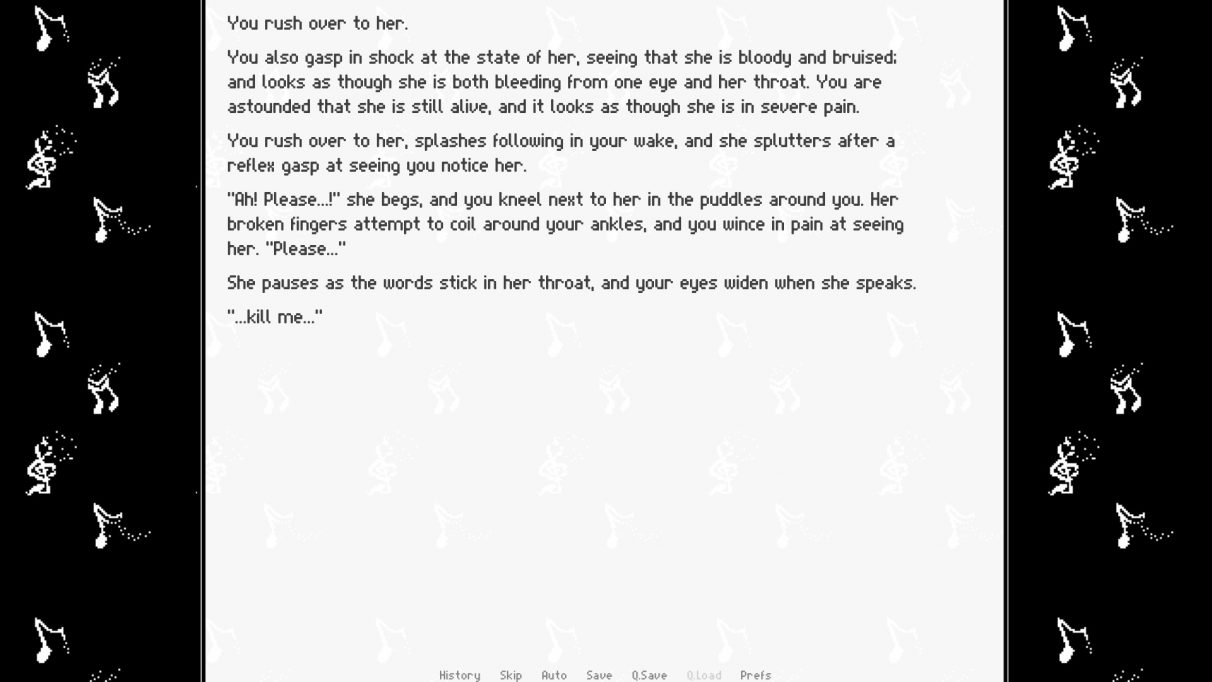 Working with both horror and quite raw emotional drama is a delicate dance, and one I'm impressed to see performed at all, let alone as well as this.

I want to know what's happening. I want to know more about everyone. And most tellingly, I want to resolve the arguments, to explore and build on the relationships, to hear and say what I think I'd need to in Libretto's place. The Ghost of You promises a lot of possibilities for an often inflexible genre, and from the nuanced understanding of people it's shown so far, I'm inclined to believe it.