Unexpected joys? Me? Why, I can certainly help you out there. In the last week I've received a temporary cat, found an excellent red corduroy jacket for six quid, got my copy of Dessa's book signed at a gig and... oh, you meant games? Well. Well, fine. That's fine. Have a round of Unknown Pleasures instead. Spoilsports.

Without even bringing up the best thing that happened, this week's roundup of the best Steam releases you haven't heard of includes desert flyers, desperate liars, and desktop spiers.

Choose Your Own Misfortune never quite seems to explode in popularity nor fade away. Cloud Chasers - Journey of Hope has a setting potentially bleak and dark, but its art style and reasonable difficulty bring its heart to the forefront instead.

Father and daughter set out into a baking desert seeking the uncertain sanctuary of the Spire. To survive, they dredge the sky with a homemade glider, hoping to gather precious water from clouds before being chased off and killed by the callous machines of the wealthy sky dwellers who ruined the land to begin with. Camps and caves and sparse patches of vegetation appear as you walk by, but each can be ignored, relieving some pressure from the usual Survival Choices formula.

Swooping through clouds is pleasant and just challenging enough, and the deadly machines keep it from becoming a chore. The real pull though is the interactions you're offered at the random spots of interest. A hermit asks where you're going - do you lie? A familiar face appears, now clad in the uniform of the oppressor. Do you greet him? Each could result in new tools or supplies, cost water, or harm you both.

The writing is succinct but heartfelt without getting cloying or naive. There's a warmth and kindness and even joy in these two characters being together. They respect and enjoy each other's company, suggesting a loyalty that largely steers clear of tedious enDaddening.

It's the Settlers. IT'S THE BLOODY SETTLERS SOMEONE RESTRAIN ME.

You're robots! Now BUILD. Oh, alright. The Colonists is a building game where you organise slightly cute little robots a bit like EVE from the faintly insipid Wall-E. Tired of toiling for humans, they've set out to build settlements for themselves on distant planets. Their behaviour is modelled on humans (to make them better at providing for us, see, like in Nine Planets Without Intelligent Life), so they require food and water, and their buildings demand wood, stone, iron, and all the usual primitive builder-y stuff.

So you plonk down a woodcutter, a well and a fishery, and some houses (which function as a discrete digestive system, converting food and water into energy units for someone to deliver to workers), and connect them all to your colony ship with roads. It's these roads that show the game's inspiration - although much less elaborate than the Settlers' hexagonal, height-based road network system, they function in the same way, with workers simply dropping goods, and dedicated carrier bots shunting them about one at a time from connection to connection. Overloading a road causes a backlog that can ripple out to shut down a poorly-planned colony, while a smoothly operated network is a joy in itself.

It's pretty too. Although not quite as peaceful as Blue Byte's original masterpiece, nor as dangerously compulsive as unexpected cousin Factorio, The Colonists is a delightful little strategy game both to play, and to simply watch as your happy little plastic people go about their day.

I used to be a big people watcher, but not quite like this. In Do Not Feed the Monkeys, you are the newest member of a shady and poooossibly evil (I mean, probably, but they could make a case for technical neutrality) society that spies on people. Sort of. It's all a bit hard to explain without stripping out the oddness and uncertainty that makes it an interesting experience.

You have a computer with a handful of basic programmes on. Games with a diagetic interface (ie: an operable computer within the game itself) have had a good run these last few years, but they can be extremely hit or miss. DNFTM keeps things simple, you really only have emails to read and instant messages to occasionally reply to. Oh, and the main programme, which lets you access mysterious cameras installed in unknown locations so you can spy on people. Your membership is predicated on paying for access to more cameras. What's on the cameras? Well, that's up to you to work out. Some of them appear to show nothing much - an exterior shot of a runway, or an industrial machine. One shows an old man with a lot of VHS tapes (an ancient, less convenient form of Netflix that on the plus side you could throw at salesmen). Another shows an empty room occasionally livened up by a mouse, or by a woman who comes in to look through a telescope and mutter to herself.

How do you pay for this? There are two options - by devoting time to casual day jobs, or by answering occasional questions about your "monkeys". These are answered by clicking on words or objects in shot and linking them together to search for more information online. You also need to sleep and pay for rent and food, which is why you might be tempted to take the advice of your MSN Messenger (shut up) friend and... y'know. Feed the monkeys. Just a little bit. Everyone does it. Just be careful.

This is key to why the game works. It's not clear exactly how well behaved you should be, nor what constitutes going too far, nor whether the whole thing is a meta-experiment on yourself, or what. Ordinarily such uncertainty works against a game, but here it feels about right. Temptation is a terrible thing.

The influence of Papers, Please on indie games is too obvious to even bother going into, so that's my excuse sorted. Headliner: NoviNews takes the "stamp some papers to make a difference" concept into journalism, where (arguably inaccurately) paying for food is no real concern, but the impact of your message is enormous.

You are Spronglo Bertminster (or something else if you're normal and/or don't have to come up with 20 one-off character names a week), a newly employed news editor in a fictional nation of the nearish future. The half-settled matters of the day are mostly about genetic modification, but although standard, meddling with Mendelian matters has consequences both medical and political, and these are the big issues on your desk. Globalism - is our nation being exploited by a neighbour, or is that a veil over greed and paranoia? Is the fancy new synthohol a Good Thing or a Bad Thing? Healthcare - is it a fundamental right, or are you a wrong idiot from evil space? Your reporters will send you articles, and your mighty stamps of Yes This'll Do and What The Hell Is This Pish Sin will dictate the nature of your hopefully engorged press organ.

While the politics could be tackled simplistically, the game does a pretty respectable job of keeping things muddy and uncertain, and shows quite neatly how all these issues have a lot of overlap that defies the easy answer of just picking a 'side', but also makes picking a centrist stand feel distinctly uncomfortable. The nation that supplies so much genetic medicine might be on the dodge, but calling them out for it might stoke up blind xenophobia. And of course, at the end of the day, if your bosses go out of business, you lose your influence over public opinion even if you're in the right. And that's before you consider the impact of politics on your friends, family, or the sinister anonymous figures who sometimes approach you in the street. 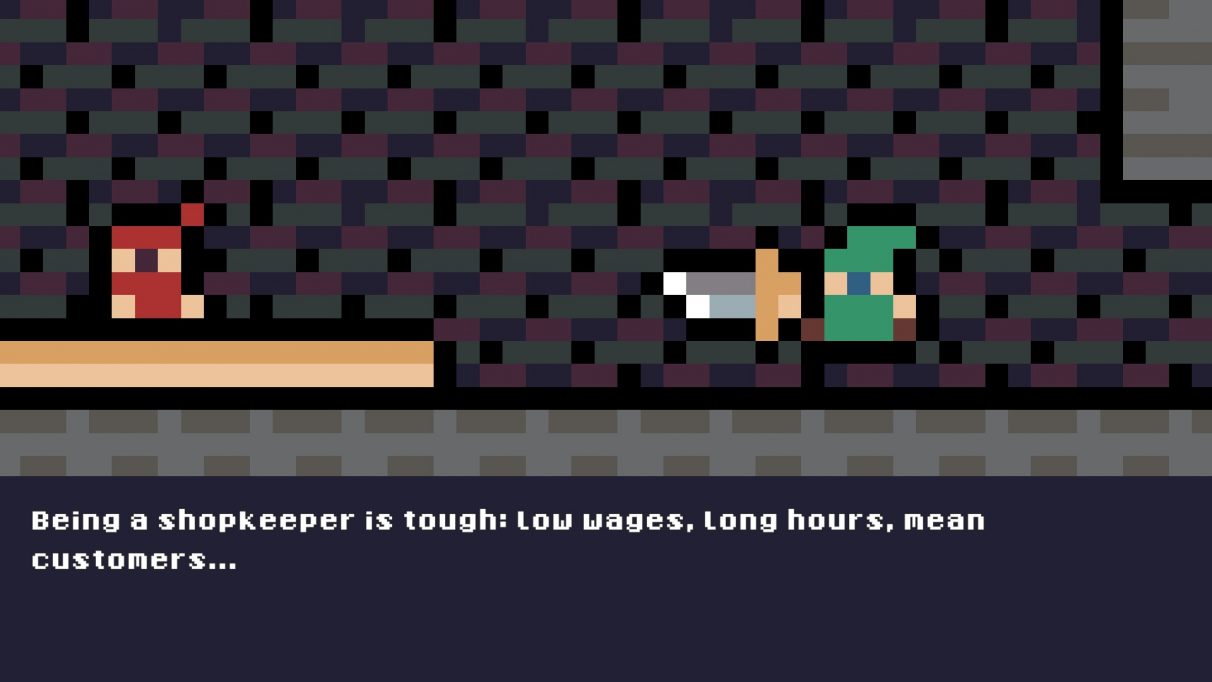 This is so stupid. I shouldn't be enjoying this so much. Lonk is a little dude who's called upon by the king to do heroic stuff, but once he leaps out of bed it's entirely up to you what you do. Dash to the castle and grab your shield, but the guards won't let you out the back until you go up the mountain to pick up a fancy sword. Do that and - oh hey there's some friendly NPC and I have a sword, so STABTIME.

This gets Lonk sent to prison for murder. Once he's out, he can start again, and this time I'll do it properly. And end up squished under a massive lift. Oops. Fortunately Lonk learns to live without his bones, and leaps out of bed once more to have another go of things.

"See all the endings" isn't all that unusual as a... I suppose it's a subgenre? But in any case, Lonk's Adventure is silly and funny and while it can start to get repetitive, it's not really meant to be played for hours on end, but in shortish bursts when you feel like playing around and seeing whether the game thought of what-if-I-do-this. It usually has.

Pick of the Week: Oh, I may never forgive myself for denying a strong Settlers-like. I only really loved the first one, see, and after 2 they were all so disappointing that... well, anyway it's Headliner: NoviNews. 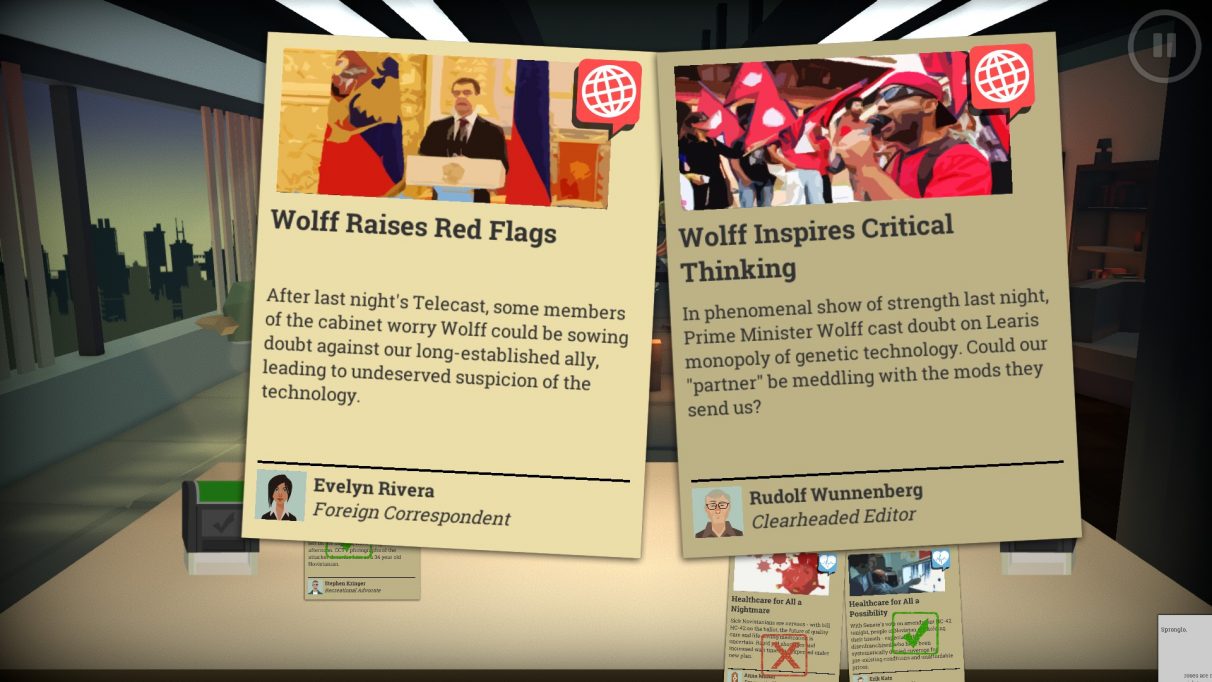 Some issues can feel a little bit forced. There were several instances where I felt insufficiently informed about an issue to approve a piece one way or the other, which I'm unsure how to interpret, as it could well be an intentional commentary on journalistic standards. I also felt unsure exactly what my public image was at times, possibly because I'd occasionally run somewhat conflicting items. It's also a bit jarring to drive a nation to complete chaos in under a week, but I suppose the alternative would have meant a tedious decades-long game of gradually poisoning public discourse until your idiot son takes over the empire.

But! Exaggeration is likely necessary in political games, particularly ones about journalism, and that I felt uncomfortable is probably a Good Thing. I am certainly curious to see more of it and to see what else I can get up to (there are quite frequent conversations too, with a range of possible responses) and what effect it'll have. Also you can adopt and pet a stray dog. I called her "Floofenbiebe". My only regret is that this is clearly a cat name.

Now, to see us out, let's have some more of the shameless self-indulgence that made all this possible: