Robots should be either adorable or terrifying. That's my view and I'm sticking with it. Sure, it's probably more important that they're angular and efficient when they're building cars, or that they're a bit more suited to their work than this poor fella, but the little bots in The Colonists [official site] look like they'll combine adorable automation and industrial efficiency.

Frozen Synapse folks Mode 7 will be publishing The Colonists, described as "a settlement building game inspired by classic titles like The Settlers and the Anno series", and it's the work of one-person studio Codebyfire.

This will be the first solo game from Richard Wallis, the designer behind the Codebyfire name, but he's been working in the industry for ten years. The Settlers with synths seems like a heck of a pitch to me, considering how much of my love for the early games in that series related to the way supply lines were so machine-like. If you've never played a Settlers game, you've missed out on one of the most soothing experiences in gaming. The beautiful calm of those games is particularly notable given that they're essentially in the management genre; you're plotting fairly complicated supply and demand routes, and there's probably mathematics involved somewhere, but it's all just so charming and relaxing. 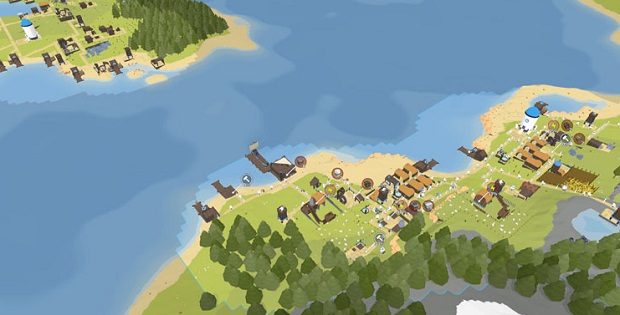 If The Colonists can capture even a little of that feeling, and we only have screenshots to go off so far, it might well be a lovely thing. We'll find out soon enough, with an Early Access release planned next month. It might have something in common with the early stages of Surviving Mars, another colony building sim with lots of bots. For now, here's what we do know:

"You'll advance from the Stone Age to the Space Age as you build the infrastructure for your colony by constructing complex road, boat, train and drone transport systems.

"Harvest natural resources, set up farming and food production, sculpt the terrain to optimise your networks, conquer other settlements or trade with new allies. Explore, research, manage, tweak and refine to your heart's content!"

Drone transport systems, eh? By 2018, every game will contain a drone. Or an eagle with all the abilities of a drone if it's historical.