Getting to explore the world and its many countries is lovely. But, as the trailer for Wanderlust Travel Stories takes pains to point out, it’s also difficult. So instead of bothering with the faff and expense of getting on a plane, how about experiencing these places through the tales of others? Well, that depends how much you want to be privy to someone else’s soul-searching.

“We want it to be the game you play when you’re travelling - or wish that you were,” writes developer Jacek Brzeziński. That’s approximately 100% of the time for me, so I played a little of the demo, guiding fashion student Martine around Thailand.

The environmental writing is lovely, giving a sense of all the sights, sounds, and smells of the place that you tend to notice when surrounded by the unfamiliar. You also have to balance stress, fatigue, money, what you’re carrying with you and wearing, and so on. It can affect your character’s mood, which in turn can open up new actions. The fact that my fatigue went through the roof because of jetlag on the first day was a nice touch.

Unfortunately, I’m not a huge fan of Martine. She claims to want to get to know the “authentic” experience of the country, but seems to only speak to other travellers. Spotting a fellow tourist in the market, she thinks to herself that they are “certainly a person who could tell me something about the real Thailand.” On the other hand, the only interactions I had with locals involved buying food Martine didn’t recognise or booking a room to stay in.

Martine and the other tourist have this conversation, which is perhaps more exotifying than “profound.” 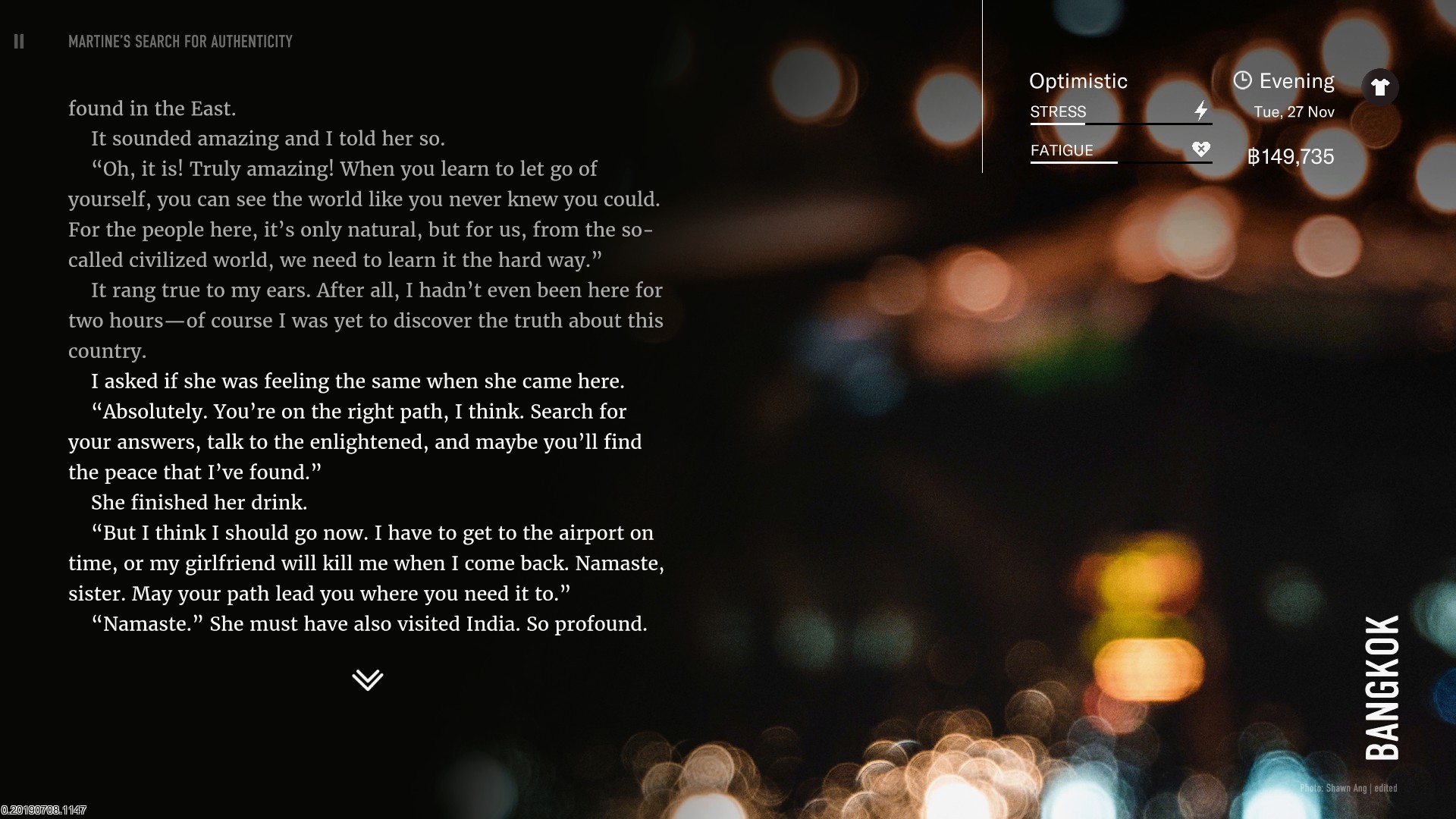 This may or may not be intentional. A bug prevented me from getting too far into Martine’s trip, but Brzeziński says that “every journey ends with your character becoming an internally ‘richer’ person,” so maybe she’ll learn better. But even then, "Westerner goes abroad, comes back humbled," is a pretty fraught trope.

Much of the writing team is experienced. Brzeziński, whose previous credits include The Witcher, Hitman, and Dying Light, joins fellow original Witcher story designer Artur Ganszyniec, for instance. But basing the game’s travels on “what we felt during our journeys, and what they mean to us today,” doesn’t necessarily leave enough room for real people’s cultures to come through except filtered by the lens of the “profound” travellers from outside. Who knows! The demo does touch on some of the issues caused by tourists in Thailand, so fingers crossed it can pull it off.

Wanderlust Travel Stories is scheduled to release on Steam for $19.99/£15.49 on the 28th of August. And if all of this sounds tentatively appealing to you but you want something that is definitely, explicitly anti-colonialist and good as hell, you should play 80 Days.