If Way of The Passive Fist were a true brawler in the vein of Streets of Rage, I would forgive people for being disappointed in it. Taken at face value, it doesn't quite live up to the heady standards set by the likes of Konami, Capcom and SNK back in the day.

It's a good thing, then, that under the familiar 90s arcade facade lies a satisfying game of memorization and rhythm that (while not without issue) makes for a very respectable debut title from new studio Household Games. It's out today, and here's Wot I Thunk of it.

The aesthetic framework is pure Capcom, circa 1993, with sprite-art to match. The Wanderer walks the plains of the sun-bleached world of Zircon 5, battling mutants, madmen and cyborgs on a quest to halt the latest plot by the nefarious Dr Dyson (who, of course, lives in a giant metal sphere). Bad dudes come at you, you fight, the sign flashes GO! and you resume your march. Only here, you can't punch back. At least, not initially.

Way of The Passive Fist's combat is primarily a test of endurance. No matter how many enemies are around, they'll politely line up to approach you one at a time and begin their attack, each swing depleting their own stamina bar. Depending on whether the attack is a strike, thrown weapon or a grapple attempt, you parry or dodge - each a one-button action - until they run themselves ragged enough for you to cheekily knock them over with a little finger poke.

Every enemy in the game (a total of 9 types, each with a few palette-swapped variants) has a different attack pattern which always comes out exactly the same. The most basic grunt in the game just throws two punches in a row, but the beefiest of brawlers towards the end has a rapid chain of Grab/Punch x3/Grab/Punch/Grab, and there can be 4+ enemies on screen at any given time. And that's how what initially appears to be a brawler reveals itself to be a game of memory and rhythm, with each combination of enemies forcing you to rapidly dredge up their pattern from memory, then tap out the appropriate counter.

But wearing down every enemy would be a tiresome slog, so to accelerate the process, you have a combo meter. As you chain parries without missing a press, you charge up to three levels of special attack, the first being a single straight punch from the Wanderer's otherwise-inert cyborg right fist, enough to knock out most regular enemies instantly. The highest level attack (requiring a combo of 25) clears the screen instantly, and so the later game becomes a race to charge it up and move on. 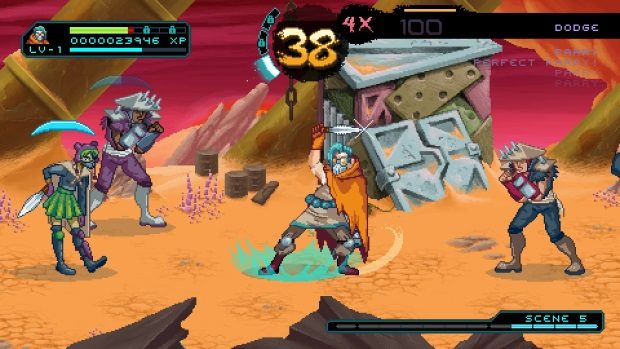 There are a few additional wrinkles to the mix. A few enemy types - cyborg and robots - don't lose stamina when they attack. These heavyweight enemies can only be knocked out with a direct attack, forcing you to learn how to charge up your specials. It's less trouble than it sounds, at least on Normal mode, and all part of a gratifying loop. There's a real sense of achievement in clearing several while feeling in total control, untouched by whatever the game can throw at you.

The one real break of pace is the bosses. They tend to feel almost like minor puzzles, putting the skills you've learnt to the test, as you evade their more complex attacks and deliberately bait minions to swing at you until you've built up sufficient charge to move in for a single shot at the king. Then you rinse and repeat a few times (usually only three cycles - their impressively long health bars crumble fast) and Bob's your radioactive three-headed uncle. Surprisingly, boss fights never escalate - whatever attack pattern they use in the first round is the one they'll use in the third. A little disappointing, but it means you're never blindsided or forced to adapt to an unpredictable situation.

Lastly, a few of the levels have environmental hazards, such as land-mines on the ground or stalactites falling from the ceiling. These wouldn't be much of a problem ordinarily, but they have such vaguely defined hitboxes that I still find the only safe place to be is on the other side of the screen. Falling rocks in particular seem to affect an area far outside their circular shadow-sprite. Where everything else in the game feels fair and deterministic, that particular element feels unpredictable and wooly. 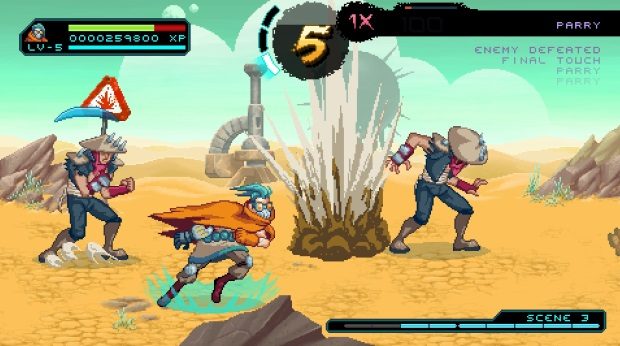 On top of a slew of accessibility options (including full control remapping, increasing foreground/background contrast or disabling flashing effects and screen shake), every part of the difficulty profile of the game can be altered via sliders. Want fewer bad guys, but to have them hit harder? That's an option. More healing/checkpoints and more lenient timing to rack up combos? You can do that. At its absolute lowest level, the margin for error is massive, meaning almost anyone can progress with a little patience.

Sadly, while difficulty scales down very neatly from default, once you've got a solid handle on the game there's only one slider that really makes things significantly more difficult: Combo Mastery. At its highest setting, it requires split-second accurate parries in order to add to your combo, making special moves far harder to charge up. While an interesting challenge on paper, it ends up slowing down the pace of the game even more, and that's not something you'd want to do here.

Pacing is Way of The Passive Fist's greatest sin. The concepts and core gameplay loop are clever and compelling, and while I would have appreciated another attack type or two, and perhaps some more reason to maneuver and use the attack-interrupting shove (something I seldom used intentionally), there's nothing fundamentally wrong with with the game. There's just not quite enough meat to cover its bones. It's stretched too thin for its own good. 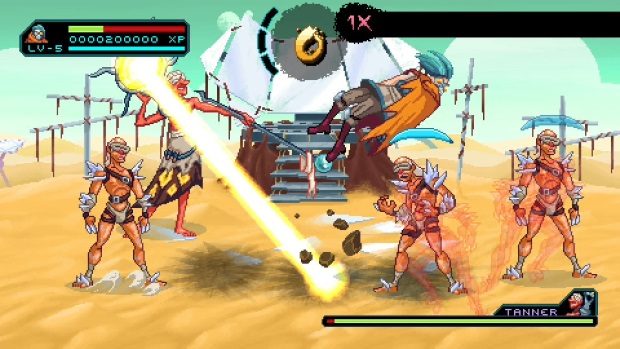 There are 9 levels (technically ten, but the last is just a short boss fight), each one with 8 to 12 'scenes', each scene containing 3-6 waves of enemies. Steam estimates that my first playthrough (admittedly with a few deaths, although usually only taking me back one checkpoint) took me a around six hours. For reference, consider that the excellent Fight'N Rage is around an hour long for a single playthrough. Six hours is a very long period of time to stretch out nine backgrounds, nine enemies and only five bosses.

At least there are some great tunes accompanying all of that passive punching. The soundtrack is a blend of catchy melodies and old-school, overtly videogame'y synth work. Some tracks remind me of the better parts of Megaman X4's banger of a soundtrack, while the Stage 6 track conjures up memories of Ratatat.

As an interesting aside, unless I'm reading it wrong, I believe that The Wanderer may be designed as intentionally gender-neutral. The visual design certainly supports such a reading and they're never referred to using gendered pronouns. In the end it has no bearing whatsoever on the action - whatever their identity, The Wanderer is a stoic badass who nobody can touch - but I appreciated that aspect of the character. 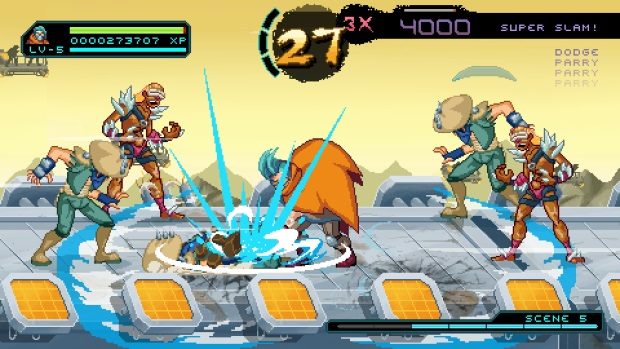 By the end of the lengthy Story mode, I felt I'd exhausted absolutely everything Way of the Passive Fist had to offer. Although I enjoyed my time with it, that I could bleed it dry in a single run seems like a terrible sin for an arcade-style game that wishes to be replayed. The only reward unlocked for completion is an Arcade mode that gives you ten lives to complete the entire game. That's not enough to get me back in the saddle, and I feel it would have been more enjoyable at half, or even a third of the length.

It's a solid reminder that the very best arcade games were finely measured things, gratifyingly balanced between challenge and scale, at least when their owners didn't jack up the difficulty to drain kids' pocket money. Household Games clearly have vision and creativity on their side, as well as some very skilled artists and musicians. All they need is to exercise a little restraint on whatever they work on next.

Way of the Passive Fist is out now via Steam for £11.39/$15, and the soundtrack can be snagged on Bandcamp here.