When WD first announced they were redesigning their top-tier Black NVMe SSD to look more gamer-friendly earlier in the year, I must admit that I rolled my eyes a bit. After all, what could you possibly do to an SSD the size of a chewing gum stick that would make it look tangibly different to any other chewing gum stick-sized SSD? Well, in the case of WD's vanilla Black SN750, all it boiled down to was a slightly different sticker on the front. Its more upmarket heatsink version, though? I take it all back. This SSD is a thing of beauty. But is it really worth paying all that extra money for, and how does it stack up against our favourite solid-state drives. Here's wot I think.

It seems silly to coo over a stick of storage like it's some perfectly chiselled sculpture hewn straight out of a slab of pitch black obsidian, but if you'll allow me to spend just a few words on the subject, WD's Black SN750 Heatsink model is really quite something. Its series of white-edged ridges are lovely and cool to the touch when you first get it out of the box, and it looks so much smarter inside your PC than its many stickered brethren. It's the Rolls Royce of premium storage, and I'd imagine some of you who have got the cash will probably buy it based on its looks alone.

You'll have to fork out a pretty penny for the heatsink version, though, as unlike the plain SN750, there's no 250GB starting model. Instead, it's only available in 500GB, 1TB and 2TB size capacities. That naturally makes the lowest entry point into SN750 Heatsink territory rather more expensive than your average NVMe SSD, with current prices hovering around the £108 / $90 mark for the 500GB model, £215 / $227 for the 1TB version and a positively extortionate £434 / $390 for the top 2TB edition (although these may well change again once stock levels and Black Friday prices begin to get back to normal again). 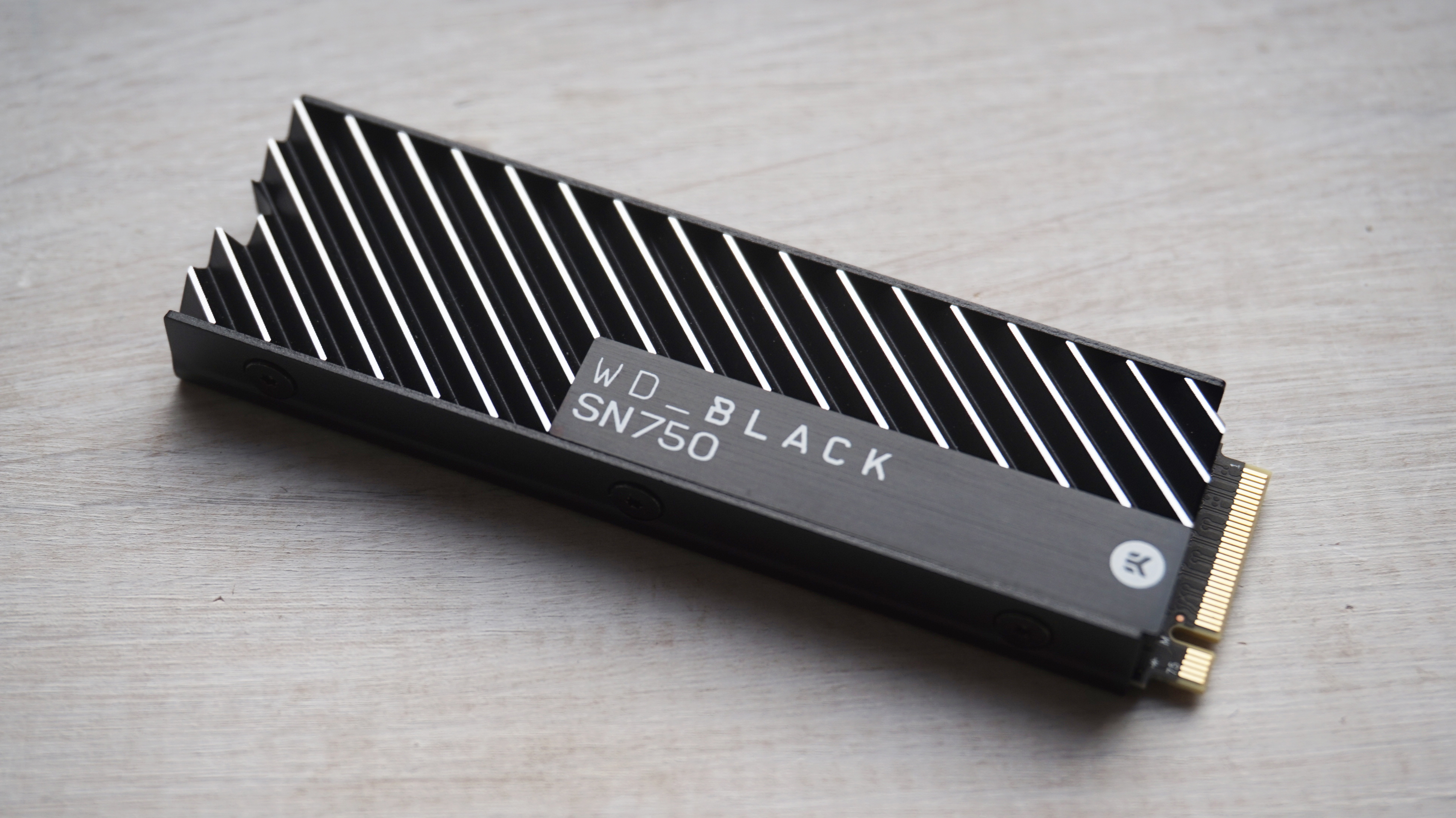 The 500GB model is perhaps the easiest sell for SN750 Heatsink enthusiasts, as here the price differs only by a tenner or so, putting it roughly on par with the Samsung 970 Evo Plus. Move up to the 1TB I've been sent for review, however, and the gap becomes much larger, with the regular SN750 only setting you back around £170 / $175 at time of writing compared to over two hundred.

But what benefit does the heatsink actually bring to the SN750? A bit like the heatsink fan attached to your PC's CPU, it's designed to keep the drive cool so it can carry on running at high speeds for longer periods of time. It's a passive type of cooling, so it doesn't involve any fans or water tubes and the like. Instead, it uses all those little ridges on top of the SSD to help dissipate the amount of heat it generates more efficiently.

It does not mean the drive will run at faster speeds than the regular SN750. Indeed, both versions of the drive have the same quoted read and write speeds on the box, with the 1TB SN750 able to allegedly hit sequential read speeds of 3470MB/s, according to WD, as well as sequential write speeds of 3000MB/s. It's more that the heatsink version will be able to hit those kind of speeds more regularly and be able to sustain them for longer - like a marathon runner versus a sprinter.

These quoted speeds aren't the same on all size capacities, I should add (see the table below for more details), but I'll be focusing on the 1TB version for this review, as that's the size WD sent me for testing.

I'll be upfront. Seeing how a drive performs over the length of time where a heatsink would actually make a tangible difference to its overall read and write performance is tricky. Indeed, in my regular set of benchmark tests, the Black SN750 Heatsink edition wasn't really that much faster than its non-heatsinked sibling. 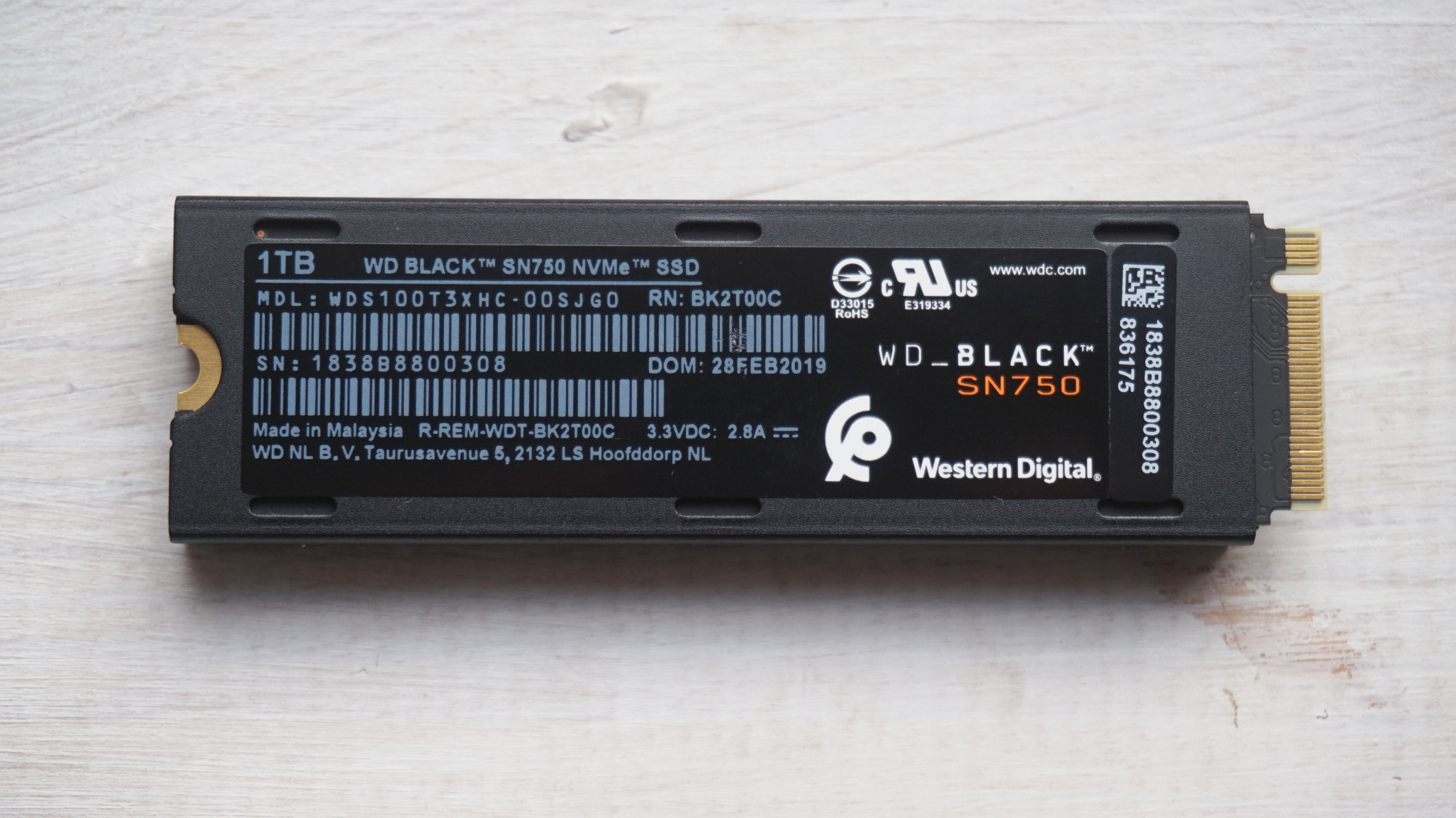 Its sequential read speed came in at a practically identical 2124MB/s in AS SSD's 1GB test, and its sequential write speed was only around 100MB/s faster at 2740MB/s. That's still pretty damn fast in the grand scheme of things, though, and is just enough to push it into the same kind of pole position territory as its Samsung 970 Evo Plus rival.

But sequential speeds aren't really a very good indicator of how fast a drive will perform in real life. After all, most of your data is scattered about all over the place on your SSD's storage banks, not in nice, neat, sequential blocks, making random read and write tests a much better indicator of day-to-day performance.

Here, the heatsink version came out a teensy bit in front of the regular SN750 with 45.8MB/s read and 155.6MB/s write, but the jump is so small compared to the SN750's 44.2MB/s and 148.4MB/s that you're unlikely to see much of a difference. Indeed, I was hoping its cooler running temperatures might push its random read speed up closer to the Samsung 970 Evo Plus' 55.2MB/s random read speed, but alas, it was not to be. It did, at least, beat the 970 Evo Plus' random write speed of 132.3MB/s, but that's hardly much of an achievement when the original SN750 does this anyway.

Switching on the drive's 'gaming mode' in WD's SSD Dashboard software didn't particularly wow me, either. The dashboard keeps track of your SSD's endurance levels, capacity, temperature, and running speed, as well as letting you install new firmware updates when they're available. But the main thing you'll want to use it is to enable that aforementioned gaming mode. This disables the SSD's low power state for supposedly quicker performance, and once I'd restarted my PC in order for it to take effect, its random read speed rose to 46.2MB/s, while its random write speed edged up to 173.6MB/s.

The latter is, to its credit, the highest random write speed result I've ever recorded on an NVMe SSD, so if you spend a lot of time working with large files, then you may feel the SN750 Heatsink edition is worth the extra cash. But once again, it's really not that much faster than the regular SN750's gaming mode scores, which came in at 44.9MB/s random read and 167.1MB/s random write, which is pretty much the same kind of increase over its non-gaming mode results (1-2MB/s read and around 20MB/s write) as the heatsinked model.

As I mentioned earlier, I'm probably not doing the heatsink version justice with these tests, and it may well prove the more durable of the two in, say, a couple of years time. But in the grand scheme of things, I reckon most people will be just fine with the regular SN750. The heatsink model does look lovely, but when you'll get pretty much the same day-to-day experience as the regular SN750, you're probably better off saving yourself some cash and putting it toward something else instead.

Personally, I think the Samsung 970 Evo Plus' nippier random read speeds just about give it the edge as the overall best NVMe SSD you can buy right now, but it is also more expensive. As such, the non-heatsink version of WD's Black SN750 remains my next-best pick for potential NVMe buyers, with the heatsink model there if you want it and can't get enough of those sweet, sweet black metal ridges.