The Samsung 970 Evo has been my under £200 SSD recommendation for quite some time now. By far the fastest and best value for money NVMe SSD you can buy right now, it's comfortably seen off competition from the new WD Black SN750, the old WD Black and Adata's XPG SX6000 Pro. But what happens when you take all that 970 Evo goodness and make it even better? No, you don't get the Samsung 970 Pro. You get the newly-released 970 Evo Plus. Because everything sounds better with a plus on the end.

Available today in 250GB, 500GB, 1TB and (in mid-April) 2TB size capacities, the Samsung 970 Evo Plus is supposedly 57% faster than the regular 970 Evo, offering substantially better sequential write speeds and mildly improved sequential read speeds for roughly the same kind of price - at least if you're talking about the middle 500GB and 1TB models, that is, as the 250GB and 2TB versions are really quite a bit more expensive than their non-Plus counterparts.

The answer isn't actually a huge amount. In fact, when I popped the 1TB model I was sent for testing into my regular storage benchmark system, the one with my Intel Core i5-8600K processor and 16GB of 2133MHz Corsair Vengeance RAM that I use to test every SSD that comes my way, including the regular 1TB 970 Evo, the Plus actually came out worse in nearly every test I threw at it.

Starting with AS SSD's 1GB sequential test, the best the 970 Evo Plus could muster was a sequential read speed of 2083MB/s and a sequential write speed of 2783MB/s. The latter is definitely an improvement on the regular 970 Evo - around 16% better if it helps to visualise things in percentages - but the former is actually 29% slower - which isn't what you want when it's meant to be able to over 1000MB/s more. 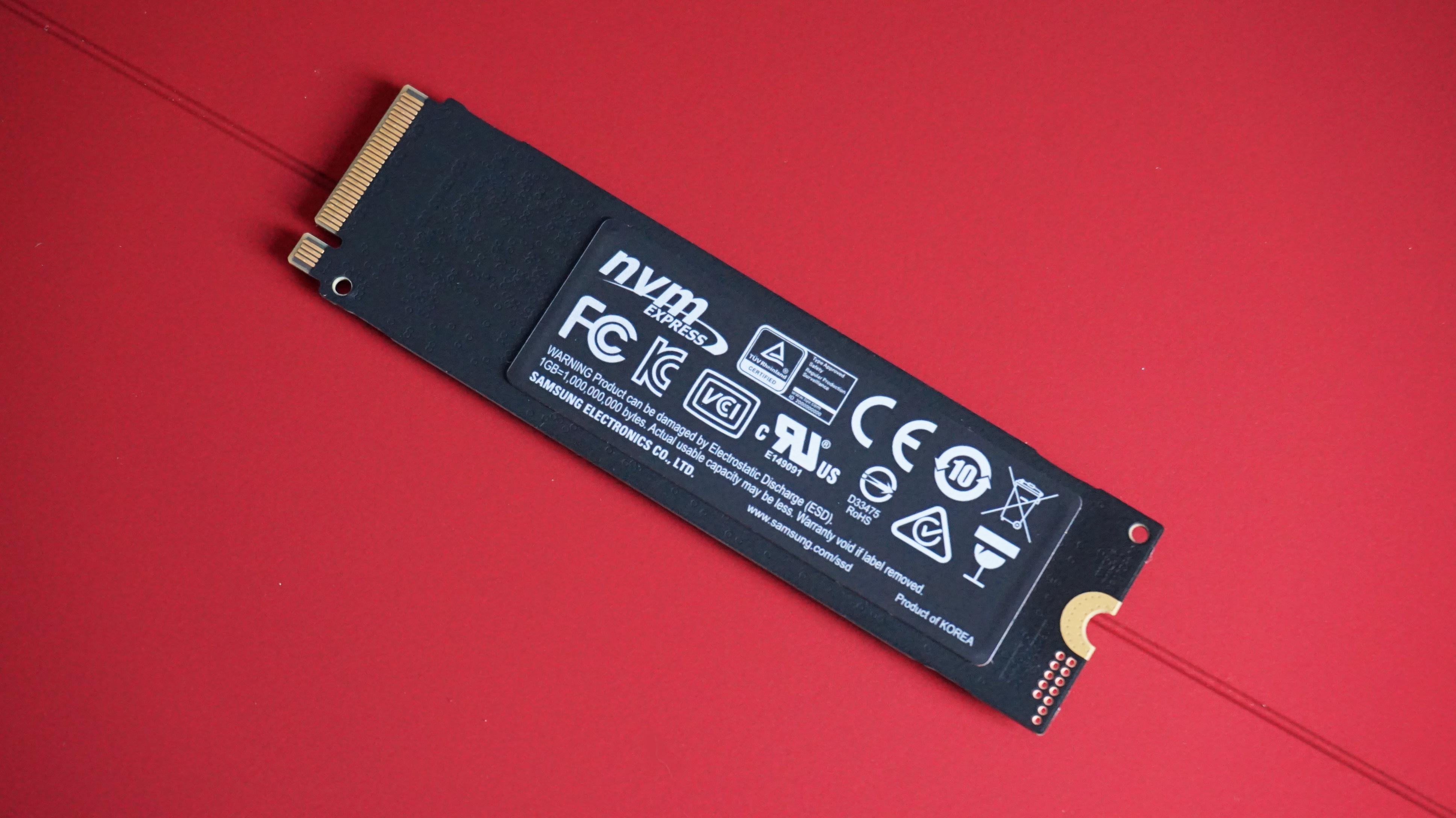 Admittedly, these results did improve quite a bit when I ran the Plus through Samsung's own sequential benchmark test that comes with their free Magician software. This raised its sequential read speed to a much more respectable 3243MB/s and its write speed to an almost equally nippy 3102MB/s, putting it not just more in line with Samsung's own figures for the 970 Evo Plus, but quite a bit in front of the regular 970 Evo as well - 17% faster in the reading department and 30% faster in the writing department.

However, given the disparity between the two scores and the fact that one uses who knows what kind of Samsung magic to get the best out of their own drives, I'm much more inclined to believe a third party benchmark like AS SSD than one made by the company whose drive I'm testing.

Anyway, sequential speeds aren't very well equipped for gauging proper, day-to-day performance, as they aren't in any way reflective of how an SSD works in real life. Instead of reading and writing data like a neat, Marie Kondo'd set of drawers, they're chucking stuff about all over the shop like nobody's business, reading and writing a little here, a little there, before dumping another load of data somewhere else entirely. Marie would be mortified.

That's why random speed tests are so much better at telling us the kind of speeds to expect from everyday PC tasks, and here, Samsung's new drive was pretty much on par with their non-Plus 970 Evo, finishing AS SSD's 1GB 4K random test with a read speed of 55MB/s and a write speed of 132MB/s. Percentage-wise, the latter is still a rather worryingly big number behind the regular 970 Evo - 29%, to be precise - but when we're only talking another 30-40MB/s or so, I doubt you'd actually notice this kind of slowdown in daily use.

Still, the fact remains that this is one of the slowest random write speed I've recorded out of the NVMe drives I've tested, which isn't exactly promising considering it's meant to be the 970 Evo Plus' main selling point. Fortunately, its random read speed is still one of the best in its class - just 1MB/s behind the 970 Evo and 2MB/s behind the 970 Pro - which may as well be the same thing once you account for things like the test's margin of error.

Even with this exceptional read speed under its hood, though, it still leaves the 970 Evo Plus in a rather awkward position. Sure, you might get better results if your motherboard has a built-in NVMe heatsink such as the Asus ROG Strix B360-F Gaming or MSI X470 Gaming M7 AC, but for everyone else, I can't see any real reason why I'd recommend the Plus over the regular 970 Evo, even when the Plus 500GB model is technically cheaper.

The Plus couldn't even save the day when I put it through CrystalDiskMark's more intensive 1GB 4K random 8-thread-8-queue test either, which simulates the kind of workload you might expect on a workstation or server. Here, the 970 Evo Plus' read speed of 1669MB/s and 1476MB/s write were still very respectable as NVMe drives go, but they're nothing on the non-Plus' pair of 2000MB/s+ scores.

Ultimately, my advice would be to stick with the ordinary 970 Evo for the time being, especially if you're buying at the lower end of the size capacity spectrum. I'll update this review if I manage to get in another motherboard with a proper NVMe heatsink in it to see if that makes any difference, but for now, the old 970 Evo is still the one to beat.