For those after the very best that NVMe SSDs have to offer, Samsung's Pro line has often been the go-to choice for workstation and power peeps alike. They're usually faster than their more consumer and wallet-friendly Evo SSD siblings, and often come with higher endurance ratings for all that inevitable heavy-lifting they'll be doing once you've popped them into your PC.

Today, I have Samsung's latest, the 970 Pro. Big brother to the 970 Evo, this particular NVMe SSD comes in just two sizes this time round - 512GB and 1TB - and I've got one of the former. Let's see if it's worth the extra moolah.

Unlike Samsung's previous pair of flagship NVMe drives, the 960 Pro and 960 Evo, the two 970s share some striking similarities when it comes to sequential read and write speeds. Both of the top models have a claimed 3500MB/s read speed, and there's just 200MB/s separating their maximum write speeds.

Indeed, the 500GB Evo and 512GB Pro bear an even closer resemblance to one another. Both drives share the same sequential write speed of 2300MB/s and there's just 100MB/s separating their maximum rated sequential read speeds. Here's all that info in a handy table for easier reading.

Starting at 600 terabytes written (TBW) for the 512GB model and a massive 1200TBW for the 1TB version, that's essentially double what you're getting with the 970 Evo. You're still looking at the same five-year warranty across both 970s, all told, but if you're the type of person who regularly works with large video files and such like, the extra reassurance provided by the Pro may be worth the extra investment.

That doesn't exactly bode well when it's the more expensive drive, but fortunately its sequential write speed was a little more optimistic. Here, the 970 Pro managed 2222.5MB/s, which is pretty much in keeping with its maximum claimed speed of 2300MB/s.

The 970 Pro is clearly capable of reaching those touted speeds on the box, however, as when I put it through Samsung's own sequential benchmark in their Magician software, the 970 Pro managed 3493MB/s read and 2277MB/s write. It's hard to say how Samsung's test differs from AS SSD's or whether it's been specially optimised for their own drives, but it's worth noting I saw the same thing happen with the two 960 drives as well. In both cases, they struggled to go much beyond 2400MB/s read in AS SSD, but managed to hit their prescribed speeds in the Samsung benchmark without issue. 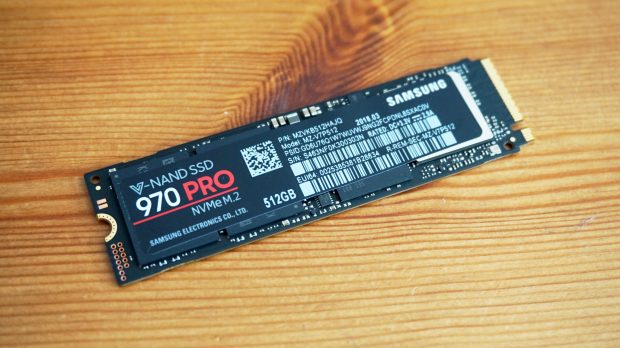 Really, though, sequential speeds aren't the best indicator of how an SSD will perform day-to-day. After all, data doesn't tend to get saved in nice, neat rows, one bit after another. It's chucked into every available nook and cranny all over an SSD's storage, making Random tests a much more accurate way of working out how fast it's actually going to be 99% of the time.

In AS SSD's 4K Random test, for instance, which reads and write 1GB of tiny 4K files all around the SSD, the 970 Pro came in with 58.1MB/s read and 168.6MB/s write. That probably sounds quite sobering after the many thousands of MB/s it can handle sequentially, but compared to the flagship 2TB 960 Pro I tested earlier in the year, that's still a 30% improvement in read speed and a 20% faster write speed. 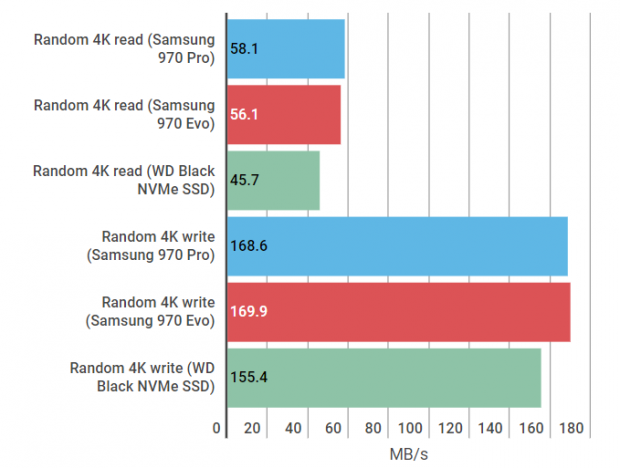 Progress, then, however small, has clearly been made since Samsung's last generation of NVMe drives. Compared to the 970 Evo, however, the difference is practically negligible. While I can't do a direct comparison with the 500GB 970 Evo because I was only sent the 1TB model for testing, the latter produced nigh-on identical results to the 970 Pro - 56.1MB/s read and 169.9MB/s write. Even if the 500GB 970 Evo was a tad slower than its 1TB counterpart, I doubt it's the kind of difference you'd actually be able to notice in real life, which, once again, doesn't really paint the 970 Pro in a very enticing light.

It got worse when I turned to CrystalDiskMark's more demanding Random 4K 8-thread-8-queue test. This is more representative of the kind of workload you'd have on a server or workstation - that is, the 970 Pro's supposed bread and butter - but while the 970 Pro pulled ahead on write speed with a result of 2096MB/s compared to the 970 Evo's 2039MB/s, its read speed was positively diabolical, scraping a mere 1385MB/s as opposed to the Evo's 2034MB/s. That's even slower than what I managed with both 960 drives, and that's after multiple re-runs to check it wasn't a weird anomaly.

Yes, you get better endurance with the 970 Pro, but for the likes of us who are probably looking to use one of these for gaming and daily storage purposes, there's really not much sense in opting for the Pro over the Evo. Moreover, you get a greater choice of size capacities with the 970 Evo, with prices starting from just £97 / $106. If you're looking for the best gaming SSD money can buy, the 970 Evo is still the one to beat.