When Western Digital first released its Blue line of SSDs, it's probably fair to say that they didn't really make much of an impact. Not in the face of the mighty Samsung 850 Evo, at least, which still tops several best of lists (including our own) even today. Now, thankfully, WD's finally jumped on the 3D NAND bandwagon, making its latest Blue 3D NAND SSDs much more competitive. There's still some way to go before they reach the same dizzying heights as Samsung's new 860 Evo, but the key thing is that they're much less expensive, potentially making them better buys for anyone looking to keep costs down.

It's also one and the same as SanDisk's Ultra 3D SSD, giving you even more buying options as prices continue to fluctuate. WD acquired SanDisk in mid 2016, but decided to keep both brands going for the sake of their respective markets, with WD always having been better on the businessy side and SanDisk being bezzie mates with the general public. With both SSDs readily available online, however, the only thing you need to worry about is how much they both cost.

Right now, that's the WD Blue 3D NAND, and with claimed sequential read and write speeds of up to 550MB/s read and 525MB/s write, it could potentially be even better than the 860 Evo. Let's find out how it fares in practice.

Today, I've got the 250GB 2.5in WD Blue 3D NAND in for testing, but you can also find it in 500GB, 1TB and 2TB capacities in both 2.5in and NVMe form factors (with the 2TB NVMe model being a particularly tempting budget alternative to the ludicrously expensive Samsung 960 Pro).

Firstly, its guarantee only extends to three years rather than the five, and its endurance rating only ranges between 100 terabytes written (TBW) for the lowest 250GB model up to 500 TBW for the 2TB version. The 860 Evo, by comparison, offers between 150 TBW and 2400 TBW. For some, that alone will be enough to tempt them away from the Blue 3D NAND, but for those looking to keep costs as low as possible, WD's drive still puts in a pretty good performance. 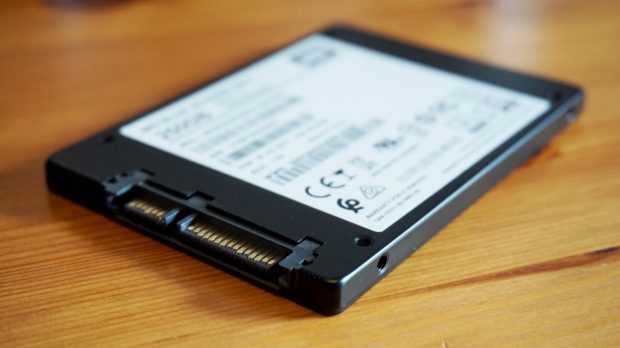 Using my 3.6GHz Intel Core i5-8600K processor, 16GB of Corsair Vengeance 3000MHz RAM and Asus Prime Z370-P motherboard test rig, I started my testing with AS SSD's 1GB sequential test, which reads and writes data in adjacent locations on an SSD's storage blocks. Here, the Blue 3D NAND managed an impressive 494.5MB/s read and 490.5MB/s write. That's not quite as quick as the 860 Evo, but the difference is pretty minimal. Indeed, the Blue 3D NAND's read speed was just 3% slower, while its write speed was just 1% slower.

Sequential speeds aren't really the best indicator of an SSD's real-life performance, however, as data rarely gets stored in such a neat, orderly fashion. Instead, data's often dumped all over the place in tiny chunks, and it's here where the Blue 3D NAND starts to lag behind. 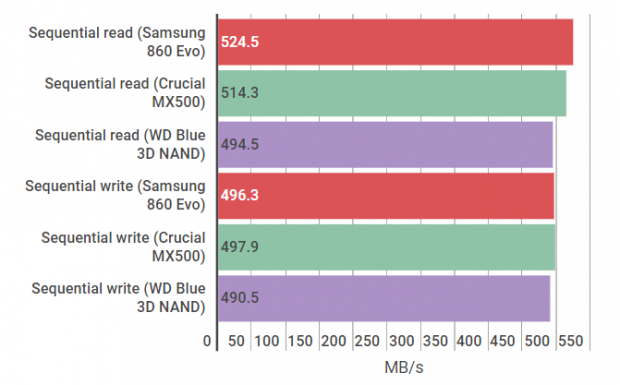 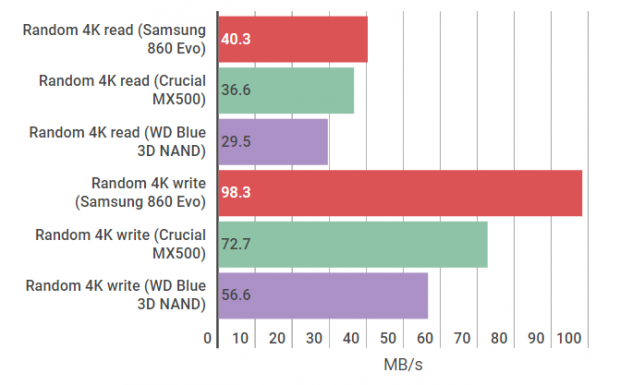 The main problem is the Crucial MX500, which is even cheaper than the Blue 3D NAND in the UK (and exactly the same price in the US), and still quite a bit better at dealing with small random files, producing read and write speeds that were 19% and 22% faster respectively than WD's drive under the same conditions.

That said, the Blue 3D NAND was pretty close to both drives when I put it through CrystalDiskMark's taxing random 4K 8-queue-8-thread test, which puts it through a much heavier workload not unlike what you'd typically see on a server or workstation. Here, the Blue 3D NAND performed admirably, producing a read speed of 400.7MB/s and a write speed of 346.1MB/s. The former was bang in the middle of Samsung and Crucial's efforts, while its write speed was just 6% slower than the MX500 and 3% slower than the 860 Evo.

As a result, the WD Blue 3D NAND (and by extension the SanDisk Ultra 3D) is still a fine pick for PCs regularly dealing with larger workloads, but for the rest of us, you might as save yourself a bit of cash and get the Crucial MX500 instead. It might not be as fast as the Samsung 860 Evo, but it's arguably much better value for money, especially once you start looking beyond the basic 250GB model.