The nicest thing I can say about Terminator: Resistance is that if a Terminator were sent back in time to wipe out its code, the timeline of gaming in general would almost certainly proceed unchanged. Confused by the apparent failure, Skynet would keep on sending Arnies back to delete it, unaware that the job was already done, and that its agents were just piling up awkwardly in the offices of developer Teyon. The killer AI would squander all its resources on needlessly ferrying metal strongmen into the past, spiral into logistical collapse, and leave humanity to be declared the winners by default. Hooray - Terminator: Resistance saved us all.

That's about it, however. Although I started out with a mind to write a Wot I Think about it, the truth is there’s barely any Wot to Think about in Resistance. Everything it does has existed in games since the advent of the mouse, and its particular format was perfected 15 years ago with Half-Life 2. They're remarkably similar in a lot of ways, but where Half-Life 2 offers everything with pace and precision, Terminator: Resistance is about as lively as that eye-ball Arnie scrapes out of his head in the first movie. As such, this isn't so much Wot I Think, but Wot Might Have Been: a glimpse into the alternate timelines where Terminator: Resistance was something fresh and fascinating.

Before we go skipping realities, though, here's the bare bones for potential players in this timeline. T:R starts with the hoary old cliche of being slapped awake in the middle of a fight, before receiving instructions on how to sneak your way to safety and creeping your way to a small group of survivors. This little group is supposed to inspire a sense of kinship, but they’re terribly written and poorly acted. You get to take up arms for the Old and Wise Survivor, the Plucky Child Survivor, and the Angry That You’re There Survivor. I did not care for any of them. 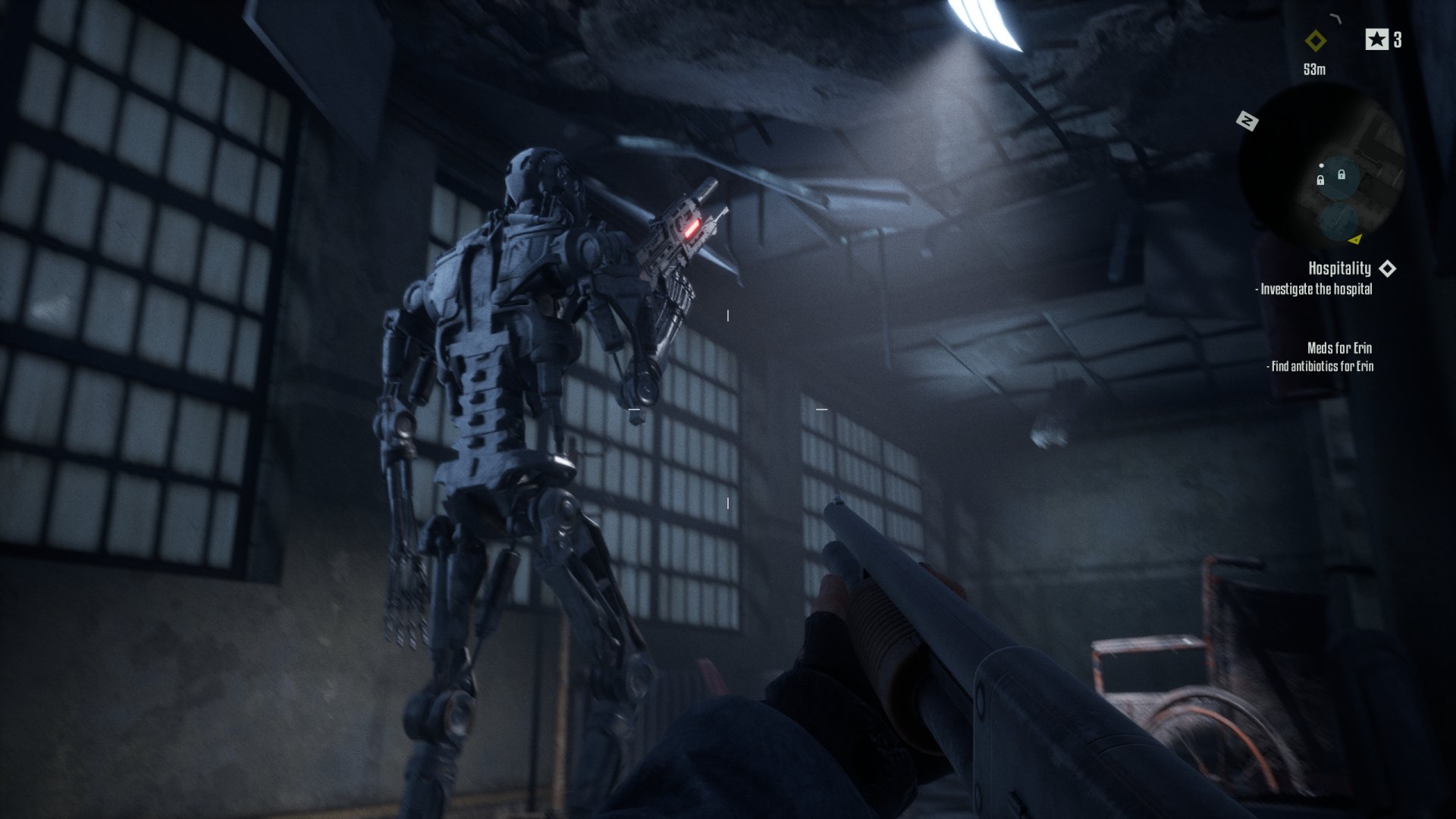 I’ll give Resistance props for trying to expand on the straight-to-FPS format of most movie tie-ins by at least trying to give a sense of an open world. It’s not huge by any means, but it’s also not the kind that drags you by the nipples from point A to B. Having built it, however, Teyon don't use it particularly well.

The fights are thoughtless, with enemies not even bothering to dodge your attacks. All you need is some cover and a decent aim, and the crawling, walking, and flying bots arrayed against you will crumble eventually. You can hack turrets to make things just a bit more interesting, and there are some stealth sections - which will end fairly swiftly if a Terminator spots you and opens fire. Progression adds percentage points to base skills, but there are no abilities exciting or interesting enough to drive you onwards to newer, more exciting player builds.

Indeed, in all the time I played, nothing really of any interest poked its head up from behind cover.

I said as much to Reviewminator Nate, who countered that we should go back in time and terminate the whiteboard that the notes for the game were written on. I concurred. Now it's gone, erased from history, and anything is possible: there's no game but what we make for ourselves. And here’s what we’ll be replacing it with: 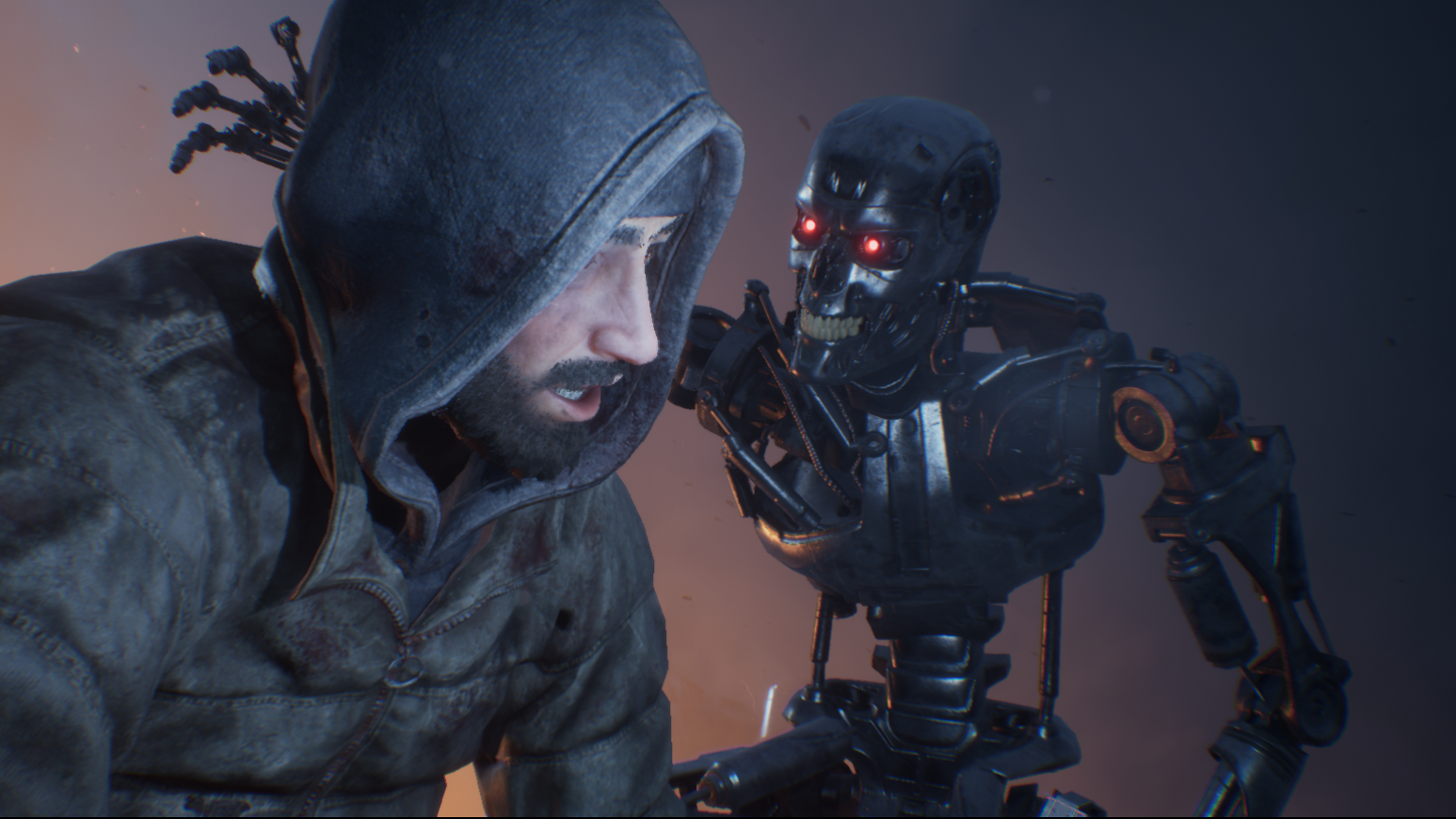 Efficient, nigh-on indestructible, and Arnie. It feels like the metal skeleton of another “Isolation” game could be hidden within the human skin of the original Terminator. Perhaps not spread across one large location like the Alien game, but jumping between set-pieces that lock you inside movie-inspired locales: a corpse-filled police station, where you're frantically pounding at doors and slipping in blood, or a grim warehouse that sees you scrambling away from a meat-flayed exo-skellington.

Just like Alien, there'd be no shooting: just hiding, glancing, and eeking. Trying to avoid the angry rob-austrian’s stare and laser carbine as he stalks the corridors, grumbling about killing you for the good of the franchise. “Derminador Free must not be back,” he would cry.

The recent Terminator movie, Dark Fate, pulled off the trick of ignoring everything that happened post-Terminator 2 and hoping you wouldn’t notice. The issue with that is that two decades of disappointment really lingers, with a proper teenage-bedroom funk. While I was trying to get tickets to see Dark Fate, in fact, I could smell it. I kept loudly asking “What’s that smell,” and was kicked out of the cinema as a result. But the stench lingered. You can’t cleanse yourself of Terminator Genisys, no matter how hard you try.

But can you reconcile its nonsense? That’s the challenge of Ter-Mania! It’s a puzzle game where all the various timelines of the Terminator franchise are draped across the screen in a big pile of connecting parts, and your challenge is to somehow make the first two movies connect with Terminator: Dark Fate, dealing with all the multiple causality loops and bullshit time-spaghetti in between. Can you make Genisys fit neatly into a series that has at least five closed loops of time, and contains both Khaleesi and Cersei?

The answer is probably “no”, which is why Dark Fate doesn’t even try - but this game is your chance to do better.

Honestly, if you were to just replace all of Half-Life 2’s assets with Terminator models and sounds, it would be a better and more authentic Terminator experience than the game I just played. There would also be the bonus that you’d get a good reason to replay Half-Life 2, and the flip-side sadness of knowing you will never, ever, everrrr play Half-Life Threeminator. But hey, at least you’ll feel something. 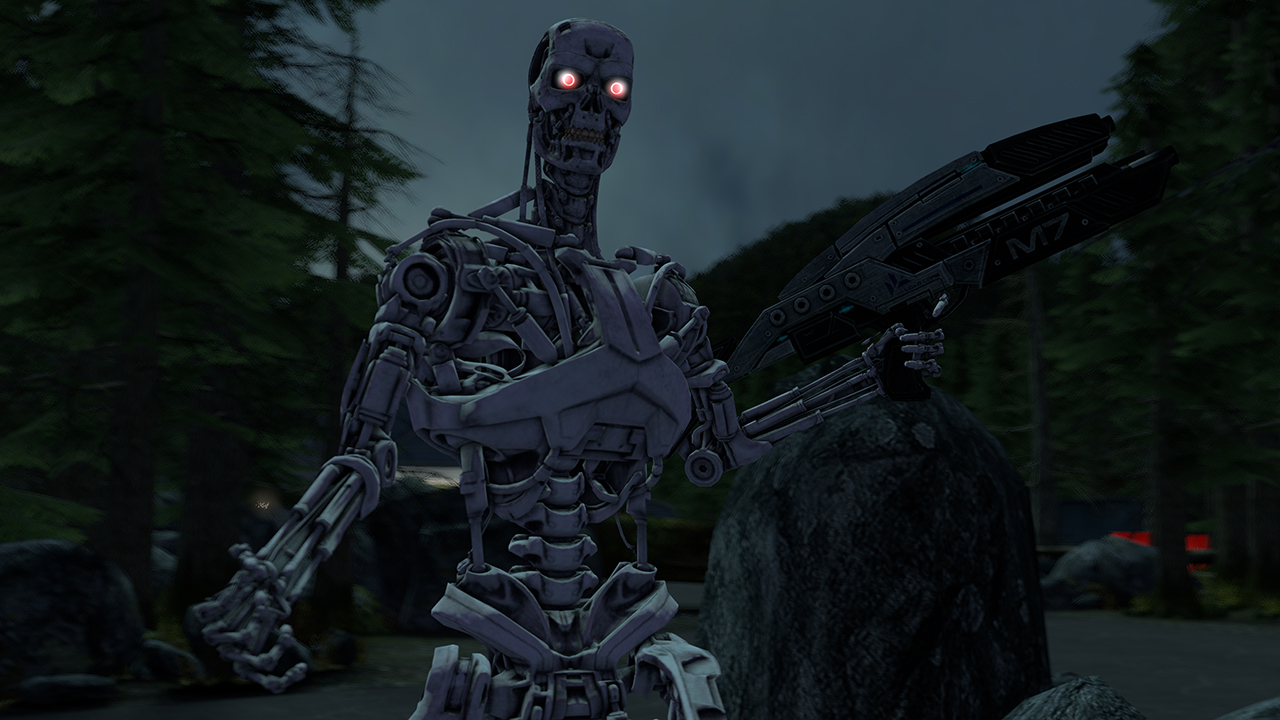 It’s perfect, right? Manufacturing an army of single-minded killbots is a complicated business. Resources must be gathered, procedures put in place, and logistics endlessly upscaled as the world falls under your implacable rule. And the more I think about it, the more I realise this would be an ideal basis for a management sim.

Imagine streamlining Skynet, aiming for the efficiency that will finally kill off the Connors. You'd spend hours, days getting the whole megamind online, before starting the slow churn of angry toasters and malevolent microwaves leading to the Cyberdyne Systems Model 101. You'd be feeding Research gigawatts into processing time-travel algorithms, while making sure your T-800 plants got enough synthetic flesh to keep pumping out Arnies. It would all culminate with the moment you hit 'send' on the big old time travel button, at which point the game would smash cut to a victory screen, as the resistance ceased to ever have existed.

Termidater: Are You Sarah Connor? 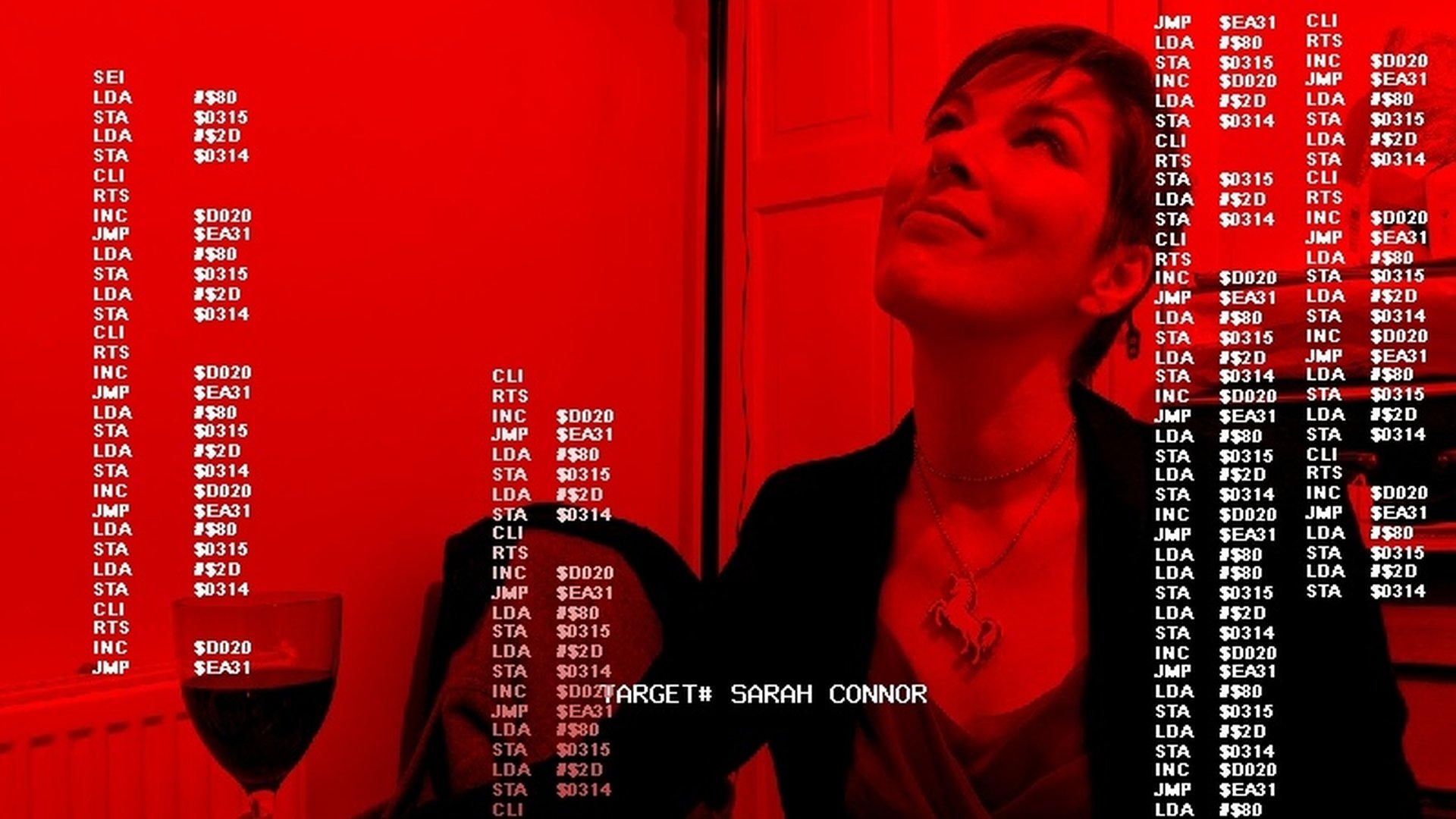 A flaw in Skynet’s programming leads to a Terminator being sent back in time and falling in love with Sarah Conner. This clearly confuses the poor monster, but he puts his best foot forward, slicks his hair down with some Termi-lube, and beats up an opera-goer to score some snazzy clothes.

There is a deleted/undeleted scene in Terminator 2, you see, where the cyborg learns to smile. Well, that scene there is the core of what Termidater is about. Seen from the perspective of the amorous Arnie, your task is to learn how to be a human, using your Terminator vision to figure out all the details of the person you’re talking to, while controlling your deadly urges to kill.

You get to decide whether or not to obliterate the waiter who brought sparkling water instead of the more obvious human choice of still water. You have to find out if the woman across the table has a son, without hinting that there’s an entire race of shiny metal bastards looking to turn him into deja vu. And you have to smile and make it all real. At the end of the date, when you’ve finally convinced her of your humanity, you get to pop the question: “Are you Sarah Connor?”.