At the end of last year, I put together our official RPS Rig, which included everything you needed to build a gaming PC for less than £1000, including your monitor, mouse and keyboard and all the extra peripherals that go with a modern PC. However, many of you asked what that rig would look like if it was just the PC that cost £1000 (you know, minus the monitor and all that jazz) and, well, it would probably look something like UK system builder Wired2Fire's Predator build.

It's a bit more expensive, with the base build on test here coming in at £1280 at time of writing, but that extra cash gets you a Ryzen 7 3700X CPU, 16GB of RAM, an Nvidia GeForce RTX 2060 Super graphics card, plus liquid cooling. With a spec like that, Wired2Fire's Predator PC is primed and ready for top notch 1440p gaming and has buckets of processing power for whatever you want to throw at it. Here's wot I think.

Wired2Fire may not as familiar to you as, say, Overclockers UK, PC Specialist or Scan, whose desktop gaming PCs I've tested in the past, but this system builder is well worth considering if you're on the lookout for new gaming PC, or just don't want the hassle of building one yourself. Their choice of Phanteks' P400A DRGB mid-tower case is relatively handsome as PC cases go, with a tempered glass side panel and a meshed front panel to show off its trio of RGB fans. Just behind those front fans sits the radiator for Cooler Master's MasterLiquid 240 Lite cooler as well, helping to keep everything nice and silent. There's still an audible hum from the fans, of course, but even under load it didn't cause too much of a racket. 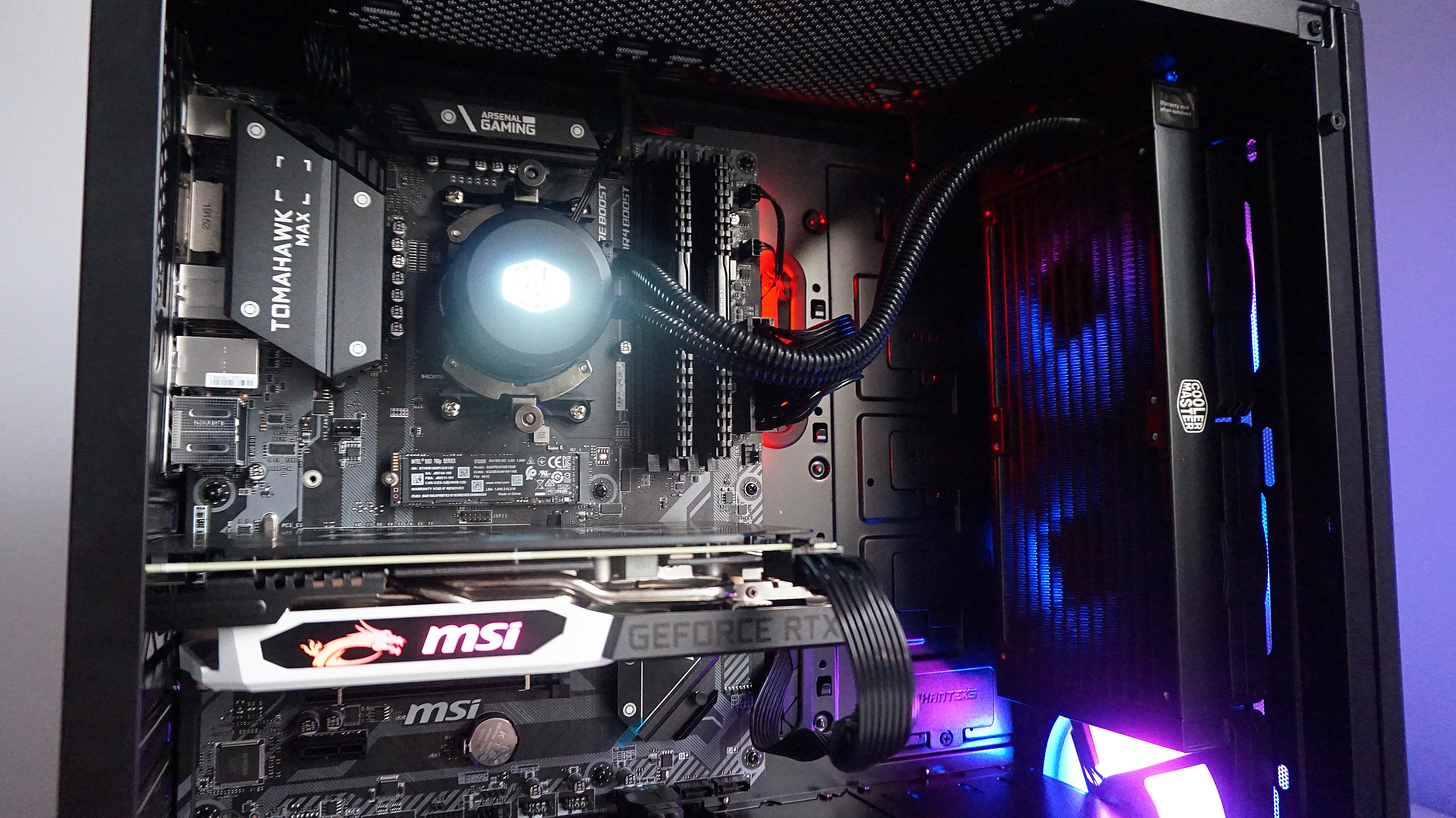 Further inside, you'll find MSI's B450 Tomahawk Max motherboard sitting at the heart of the PC, as well as two 8GB sticks of Corsair RAM clocked at 3000MHz, a 512GB Intel 760p NVMe SSD, AMD's excellent Ryzen 7 3700X processors (which is one of our top recommendations in our best gaming CPU rankings) and the Ventus edition of MSI's GeForce RTX 2060 Super GPU. It's quite a spacious case with plenty of room to poke around in if you ever need to add any expansion cards further down the line, for example, and it (thankfully) doesn't overwhelm you with any obnoxious RGB lighting strips, either.

That said, you'll have to open up the Predator's other side panel if you want to add any more storage, as there aren't any additional mounts inside the main case. The motherboard only supports the one NVMe drive, too, which is already occupied. Instead, you'll have to make do with the two 2.5in SSD mounts and two 3.5in HDD bays round the back if you ever want to expand beyond the Predator's default 512GB drive. Still, that should be more than enough capacity for most people out there, and you don't have to worry about buying extra cables either, as you'll find two SATA cables and a bunch of additional power cables in the box that you can plug into your modular PSU.

As for the Nvidia RTX 2060 Super GPU inside the Predator, MSI's Ventus card performed brilliantly in my tests, making this a great choice for those after a highly capable gaming PC at both 1920x1080 and 2560x1440 resolutions. Naturally, there are still a couple of big games out there where you'll have to settle for High graphics settings instead of max quality at 1440p, but for the most part, I was able to hit a smooth 60fps on Ultra in almost every game in my benchmark suite without much trouble.

In Shadow of the Tomb Raider, for example, I saw an average of 47fps on Highest with its full SMAA x4 anti-aliasing enabled at 1440p, but this soon rose to a much silkier average of 65fps when I dropped the AA down a notch to its SMAATx2 setting. If you're playing at 1080p, on the other hand, you can whack the AA right back up to SMAA x4 when playing on Highest, as I saw a smooth average of 70fps when I re-ran the game's internal benchmark test.

Plus, since the Predator has one of Nvidia's RTX cards in tow, you'll also be able to do a bit of ray tracing in Shadow of the Tomb Raider as well. You'll probably have to enable its performance-boosting DLSS tech to get the best performance at 1440p, admittedly - the best I managed was an average of 54fps on High with Ultra ray traced shadows turned on - but you should be able to go the whole hog at 1080p. Here, I saw an average bang on 60fps on Highest with Ultra ray traced shadows, no DLSS required.

Monster Hunter: World is another game that benefits from Nvidia's DLSS technology, but you shouldn't need it at either 1080p or 1440p here, as I saw averages of 78fps and 53fps respectively on its regular Highest setting. Yes, you could technically switch on DLSS to push that 1440p average of 53fps up a notch, but for me it's still perfectly playable as is.

Final Fantasy XV was another game that soared at 1440p, coming in with another average of exactly 60fps on its Highest quality setting. I had to turn off all the extra Nvidia effects to achieve this, mind, but if it's HairWorks and TurfEffects you're after, then you'll have a much better time dropping down to 1080p. Sans effects, you're looking at an average of 81fps on Highest at this resolution, but adding TurfEffects and HairWorks into the mix will still get you a smooth average of 58fps. To get a playable frame at 1440p with these effects switched on, you're looking at dropping right down to Average quality, as even High struggled to keep its cool with a 48fps average. 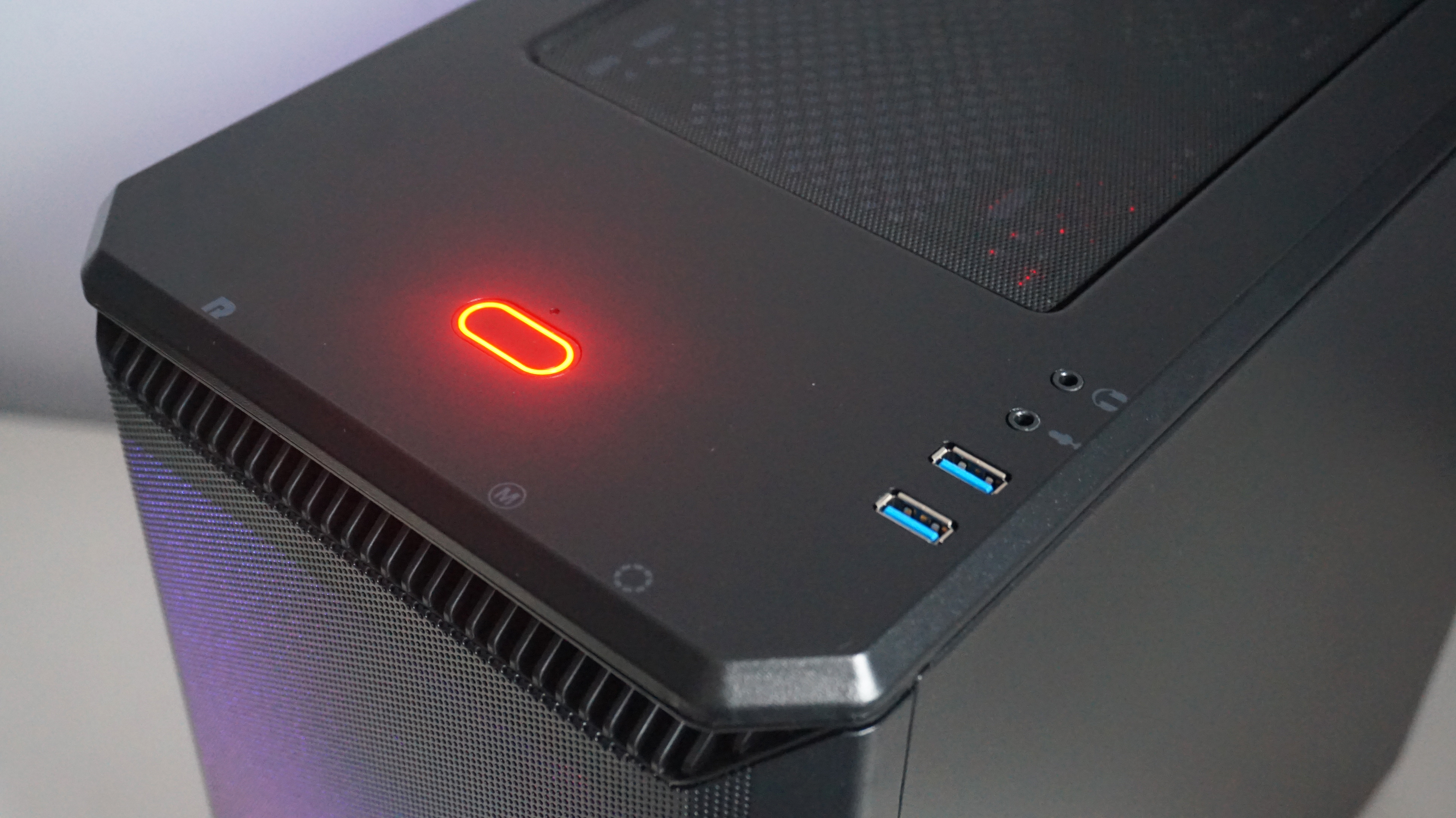 Total War: Three Kingdoms was one of the few games in my testing suite where Ultra was just a bit too much for the RTX 2060 Super at 1440p, averaging 49fps in its internal benchmark. That's still eminently playable, of course, but those after a constant 60fps will be much better served on High at this resolution, where I saw an average of 64fps. Meanwhile, at 1080p, you're absolutely laughing, with the Predator averaging a silky 72fps average even on Ultra.

You can probably get away with Ultra High in Assassin's Creed Odyssey at 1440p as well, as I saw an average of 52fps when I ran through its internal benchmark tool. If that's not quite good enough for you, though, then an average of 62fps on Very High certainly will be. As for its 1080p performance, you're looking at another smooth 60fps average on Ultra High, or 71fps on Very High.

It was a similar picture with Metro Exodus, too. On Ultra at 1440p, you're looking at an average of around 49fps - not perfect, by any means, but still playable - while High will get you a smoother 58fps. At 1080p, though, you're pretty much good to go Ultra all the way, as I managed an average of 62fps in its internal benchmark.

If you're desperate to play with ray tracing enabled, though, you may need to temper your expectations a bit. Metro is one of the toughest ray tracing games out there at the moment, and the best you can probably hope for is playing on High at 1080p, where I saw an average of 57fps. Ultra, meanwhile, came in at 52fps. You can always switch on the game's DLSS support to push both of those scores over the 60fps line, of course, but when the benchmark's DLSS option is still broken (and has been ever since the game launched), it's difficult to say exactly how much of a boost you can expect. 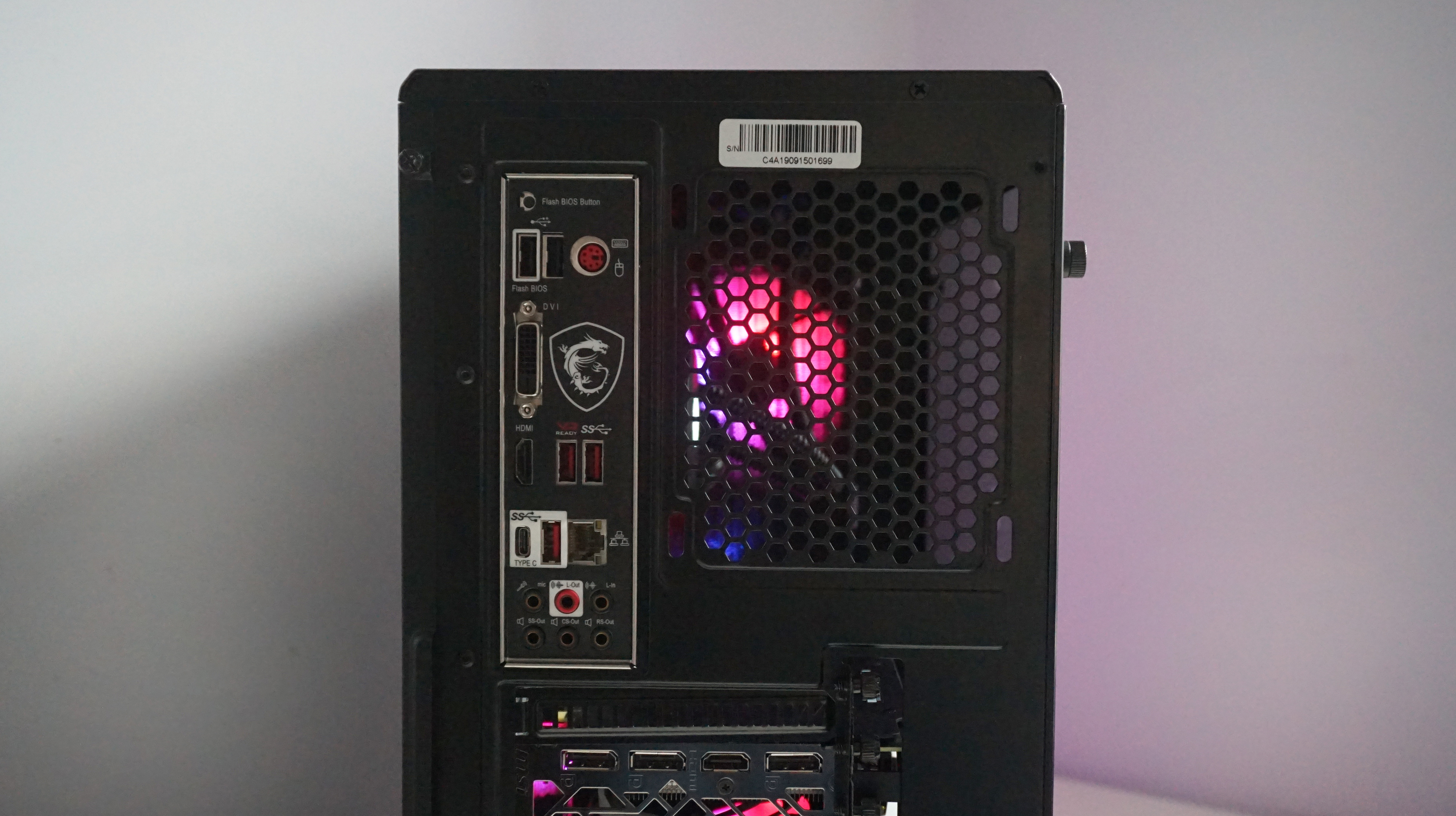 And then there are games such as Forza Horizon 4, which are just so well optimised that you can run them with everything maxed out at whatever resolution you please. Even at 1440p, I saw an average of 94fps on Ultra in its internal benchmark, while knocking the resolution down to 1080p pushed it even higher up to a massive 115fps.

The Predator's got more than enough chops to handle slightly older games, too. In The Witcher III, for instance, I saw an average frame rate of 73fps on Ultra at 1440p, and a whopping 98fps on Ultra at 1080p, which I'm sure you'll agree is definitely worth tossing a few coins at.

As for raw processing power, the Predator's Ryzen 7 3700X CPU has more than enough juice to handle whatever you throw at it. Paired with 16GB of Corsair RAM running at a nippy 3000MHz, our best gaming CPU champ delivered an admirable single core score of 478 in Cinebench's R20 test, and a stellar 4510 in the multicore test. The latter in particular is way faster than what you can expect from one of Intel's Core i7-9700K CPUs, for example (which only managed a score of 3252 when I tested it last year), which is good news for anyone who likes to do a bit of photo or video editing on the side when they're not playing games.

Wired2Fire's choice of Intel NVMe SSD is another thoughtful addition to their Predator PC. When I ran it through AS SSD's random 4K test, for example, it managed a random read speed of 56.2MB/s and a random write speed of 178.5MB/s. That's right up there with our top NVMe recommendation in our SSD rankings, the Samsung 970 Evo, which is about as good as it gets in this kind of price range.

There's really only one major flaw to Wired2Fire's otherwise excellent gaming PC, and that's a lack of built-in Wi-Fi as standard. There's an Ethernet port round the back, of course, but that's not much good if your home router doesn't live anywhere near your PC. It doesn't cost much to add one into the configuration - £12 for a simple Asus 802.11n card or £23 for a 802.11ac model - but it's something you'll still need to factor into your budget nonetheless. 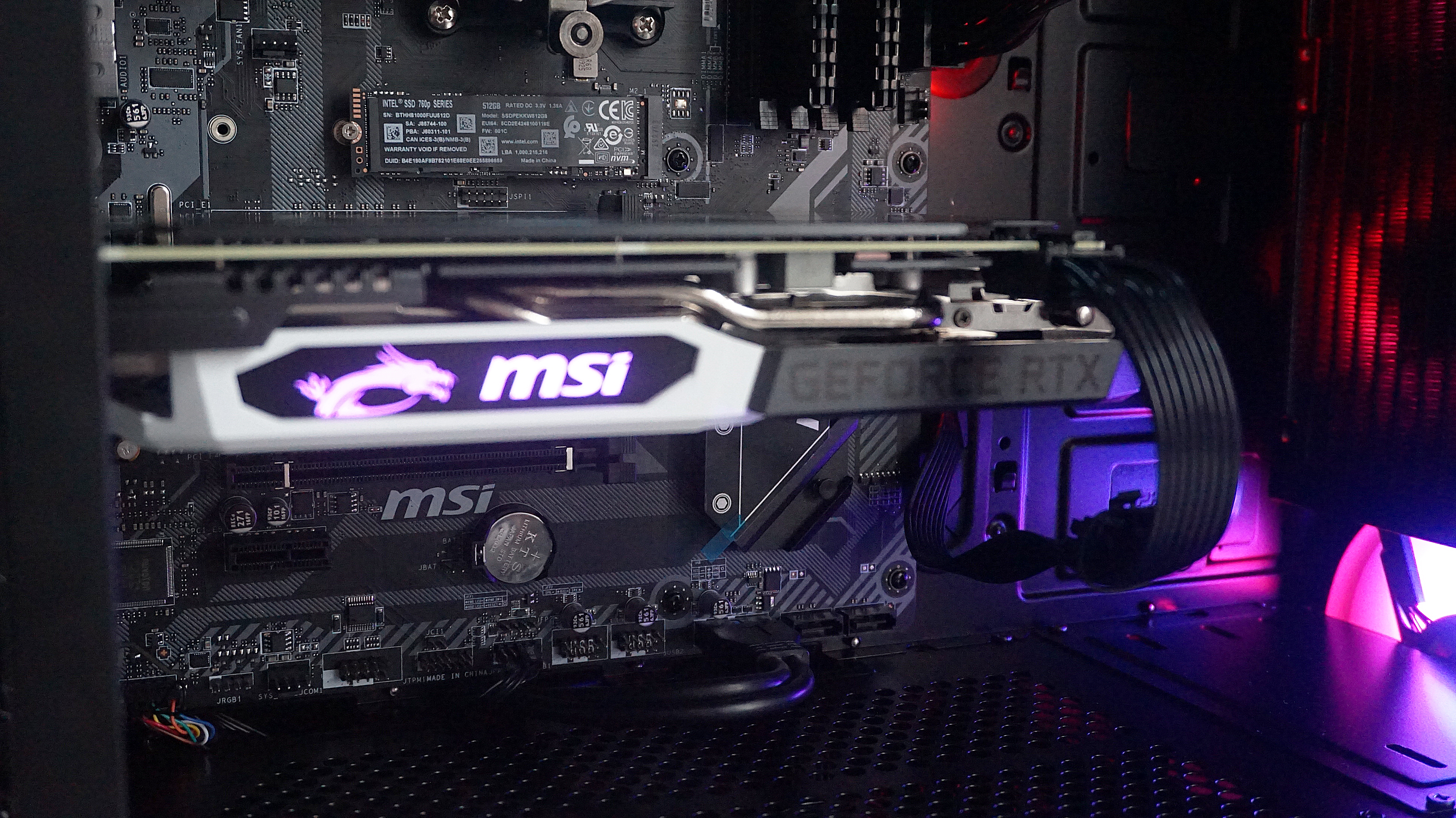 Still, Wi-Fi cards aside, the Wired2Fire Predator is still an excellent gaming PC for the money. You'd be spending roughly the same amount of money on a similarly specced PC from both Overclockers UK (£1246) and PC Specialist (£1231), but each one comes with their own set of compromises. The Overclockers build I configured didn't have the RTX 2060 Super available as a graphics card option, for example, and the closest equivalent was a single blower fan RX 5700 XT graphics card. There also wasn't an option to add liquid cooling, and the case wasn't quite as fancy looking. The PC Specialist build, on the other hand, comes a lot closer (and has a simple built-in Wi-Fi card), but there weren't any NVMe SSD options available for the primary drive. Instead, the best option was a 2.5in 480GB Adata SSD, which isn't going to be as fast as the Predator's Intel model.

In truth, you could add a second NVMe SSD to the PC Specialist and still keep its price down to just below £1300 (£1296, to be precise), but it's also worth noting you only get a three-year warranty from PC Specialist (with one month collect and return, one year parts and three years labour) rather than a five-year one from Wired2Fire (which includes two years collect and return, two years parts and five years labour). As such, I reckon the Wired2Fire more than justifies its slightly higher price, as you're not only getting a better specced PC, but you're getting a much higher level of customer service to boot.