It's taking me a long, long time to play through Wolfenstein 2: The New Colossus. The reason for that is because I'm playing it as a stealth game - a claim about a Wolfenstein game that would have sounded absurd a couple of years ago, but is now taken for granted as a result of 2014's The New Order offering a limited sneaky-stabby path. Both of the latter-day Wolfs are designed primarily to be played as spray'n'play mass murder sims, and they've got a ton of wonderful toys with which to achieve that, but, for my part, I've been there, done that far too many times, and so the idea of treating W2TNC's missions as a quieter, tenser, almost puzzle-like affair is far more appealing.

Thing is, Wolf 2's stealth is all kinds of messed up. There are entirely legitimate reasons to despise it. Me, though? I can't resist it.

The main lure is simply that it makes the core Wolfenstein experience far more unpredictable. Wolf 2 is fairly adept at using a combination of setpiece and level geometry to keep the loop of shoot'n'move ambiently remixed throughout, but it's nonetheless pretty much always about running around frantically and lobbing bullets until everyone else has stopped shouting. The sneaking route, by contrast, inherently involves not knowing exactly what will happen when you round the next corner and takes you to parts of the levels that you otherwise would not see.

Appropriately, Wolf 2 is only a stealth game surreptitiously - it carries itself as if it were a straight-up shooter when, in fact, it is not. So it won't ever direct you to to its various dark corners, mansize pipes and overhead walkways, but if you're a career sneak, you will recognise and exploit them almost unconsciously. Of course, there aren't anything like as many of these alternate paths as there are in, say, a Dishonored game, but there are enough of 'em to conjure an intermittent illusion that you are creating your own route through what are, in truth, linear maps. 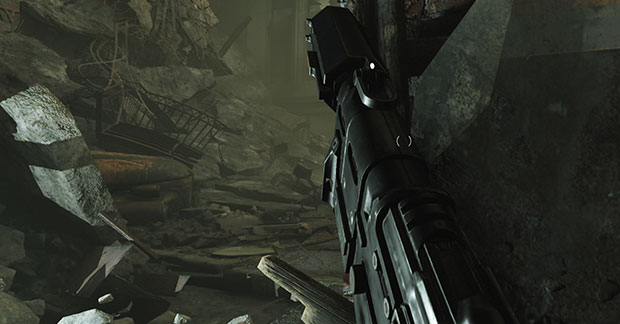 Here comes the big proviso, though: despite having sunk getting on for a dozen hours into Wolf 2 so far, I'm nowhere near completing it. (This is because stealth=extremely slow play, which I'll say a bit more about below). Some of the missions I've played thus far have been extremely well-suited to stealth play, others have not, and m'colleague Adam, who handled our Wolfenstein 2 review, tells me that later levels did not, in his experience, seem quite so setup for sneaking.

Even in my comparatively limited experience, the game has an unfortunate habit of defaulting back to faintly tedious metal corridors immediately after a relatively bravura section, and if that continues, sooner or later the urge to just blow through samey levels PDQ is going to overwhelm the urge to ghost them.

Even if that does happen within the next few hours, I'm still going to have an average-length game's worth of sneakery, and won't feel entirely dissatisfied with that. A potentially divisive aspect of Wolf 2's stealth is that, much of the time, if you get seen once, that's it. All hell will break loose, all other enemies can spot you instantly from half a mile away, and running off to hide in a corner for five minutes rarely leads to a "must have been rats" enemy alert reset. In other words, there's no way to (forgive me) take back control of a situation gone wrong - other than revert to traditional FPS deathmachine behaviour. Finding a way out of trouble is often one of the most satisfying parts of 'true' stealth games, and I can understand entirely why it's frustrating that Wolf 2 is devoid of it. 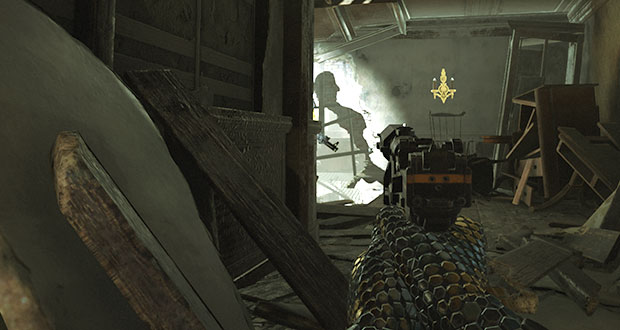 But I am onboard entirely with this game being so inflexible about stealth. In a planet ruled by the iron fist of high-tech Nazis, you're a world-famous 'terrorist' - martial law abides, you're the single greatest threat to the Reich and there is simply no way that, if you were spotted, the enemy is simply going to shrug a few minutes later and presume you've disappeared. They would hunt you until the ends of the Earth - and that is exactly what they do here.

As such, Wolf 2 is a game of absolute stealth. If you're seen even once, your cover is blown and it becomes all-out war. Somehow, this little cause and effect loop has remained endlessly entertaining to me, because it more naturally evokes the ebb and flow of cinematic or comicbook war story far more than does repeatedly running into a room and shooting everyone. The secret agent sneaks in then has to fight his way out: we all know that story well.

More than that though, it has me playing with extreme caution, and almost comically slowly. This is a game in which most people will murder everyone in a room within about four seconds, whereas each kill (a hatchet in the spine, a silenced pistol shot to the back of the head; later, a silenced machine gun that spits nails) or outright evasion might well take a full minute, and in some cases much more. 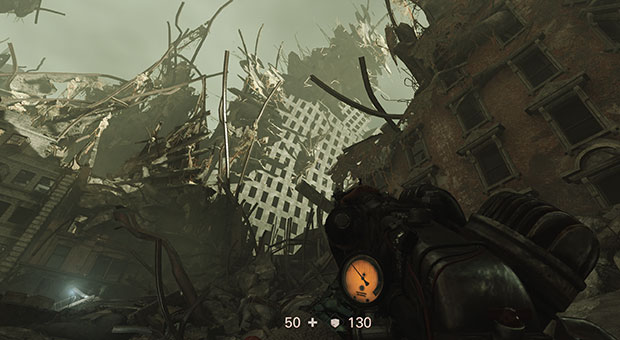 The reason why a single encounter can wind up taking aaaages is something that anyone who's felt dissatisfied by Wolf 2's stealth might have picked up on - sometimes, enemies seem almost supernaturally aware of you, even when you have not yet been caught red-handed. I have felt this frustration: the deep sense of unfairness that some guy three streets away caught sight of you even though you only leaned your head out for a split second, and suddenly all your work that level is lost. (For the sake of argument, let's just pretend quickloading doesn't exist, eh?)

Thing is, there's a reason for this, and it's not just a conceptual one that exists only in my head. Wolf 2 semi-silently features a mid-alert state for its enemy AI - the kind of thing you'll have seen in plenty of other stealth games, where your foes become suspicious as a result of a noise or finding a body, and as such are actively looking to see if anyone naughty is lurking. In that state, they can see you the moment you move out of cover. Traditionally, we see icons over their heads or a coloured bar on the UI somewhere to let us know that this has happened, but Wolf 2 lacks any stealth bobbins on its interface. Sometimes the music will crank up to something more anxiety inducing, sometimes it won't; sometimes enemies will bark to reveal their suspicion, sometimes they won't.

There's also no clarity about just how far the paranoia spreads when someone catches a brief glimpse of your heels, hears you land with a thump onto an iron platform below them or stumbles across the cooling corpse of one their allies. Is it just to NPCs in the immediate vicinity, is it to everyone on the map, does it vary from case-to-case? Honestly, I'm not sure. I've encountered all sorts of inconsistencies, and I'm still figuring it out. There's also the frankly bizarre feature whereby you get a small window even if spotted to silence a Nazi commander before he can tell the world you're there, but if a lowly grunt sees you then everyone else magically knows about it straightaway. 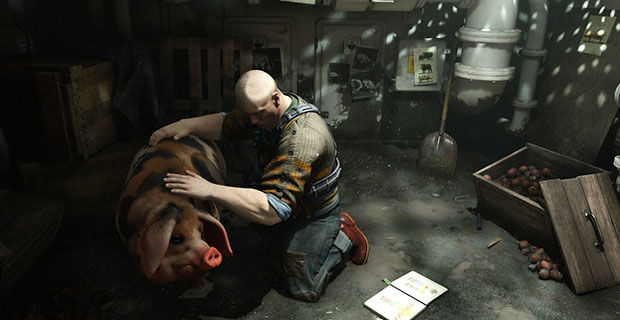 Oh, how I have sworn at this game. I have thought, several times, "balls to this - I'm going weapons-free". But when I do do that, it never feels as satisfying as it does to complete a level silently. It's shorter, it's sillier, it feels more routine, there's nothing like the same tension, and it doesn't feel like I played the game my way. Sometimes, I have to really work to succeed at stealth, less in terms of being really, really super-stealthy but more in terms of closely following the game's rules and limitations, and there are moments when I want to scream. How did that guy possibly spot me?

Well, it's because I made one noise three minutes ago, but there was no obvious reaction to it and nor did my foes' behaviour seem to change, so I erroneously thought the coast was clear. This means I'm exercising extreme in any situation, watching and waiting for any slight clue that an enemy might be already triggered. 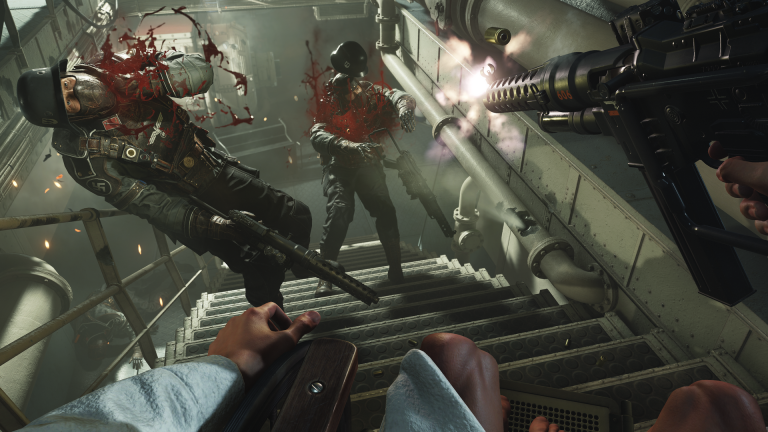 If I see a clue, I can wait it out, the enemies will reset from this state (they'll announce it too), and I become relatively free to skulk about carrying out my silent takedowns again. Wolfenstein 2 could do this stuff so much better: I wish it telegraphed that mid-alert state more openly, I wish the rules about who can sound the alert if you're spotted were more consistent, I wish that more of the weapons and gadgets had stealth-related alt-modes.

But I like that everything turns into a ceaseless warzone once the enemy knows I'm there. I wouldn't that to be any different. That's the game! That is literally the situation that BJ Blazkowicz is in. Hiding in a corner for five minutes so that the Nazi army can forget that the world's most wanted man is walking among them wouldn't make a lick of sense. I love that absolute challenge: don't get seen at all, or live with the ultra-violent consequences.

I haven't even mentioned the (optionally) silenced pistol, which is by far the game's best weapon. Wolf 2's stealth is as skew-whiff as a thatched roof after a three-day storm, but it's absolutely the way to play as far as I'm concerned.