When I go to my exercise class in the evening sometimes the matter of what I do for a living comes up in pre-class chat. Usually I can be like, "This is a credible grown-up profession. I absolutely pinky swear this to be true!" The last few days I have spent 30 hours corralling adorable bouncing blobs and selling their poop on the stock market or funnelling it into science. Maybe I'll pretend I've lost my voice at class this evening. But Slime Rancher [official site] is so cute I also want to tell everyone about it! Here's Wot I Think...

[FYI the game is in early access so you'll get the 0.6.0 build until 1 August (tomorrow!). I was playing on a different branch for the 1.0 build so just be aware there's a slight delay.]

Slime Rancher is Monomi Park's first-person farming sandboxy sim. You play as Beatrix LeBeau, a rancher deposited a thousand light years from Earth who will gradually build up her ranch and expand her access to the alien world around her.

You start off with a house on a small plot of land. Predesignated squares show you where structures can be built to contain slimes or to farm resources, but it's all so barren and nothingy. Well, except for the excitable pink blobs bounding around and cooing over carrots. 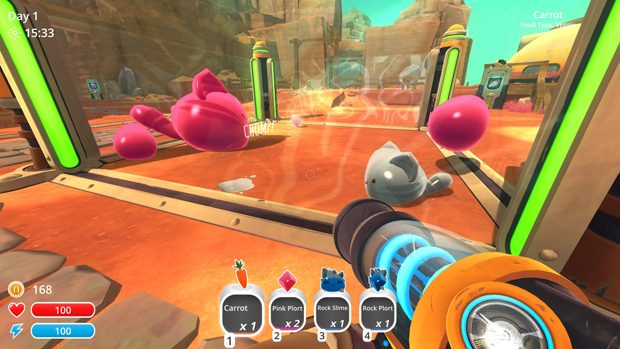 When you start, the game teaches you basic movement, shows you how to suck up slimes into your backpack, gets you to spit them back out into a little corral to pen them in and has you feed them a carrot so they poop out a thing called a plort.

Plorts are the main focus of the game systems and most of what you do revolves around how you generate or use them. Early on that's just about sucking them up and spitting them into the plort market to earn money. Later, when you have enough currency to unlock the lab area, you'll use them in conjunction with other resources to create decorations for your home and labour-saving devices to assist you in your farming. Later still, they're part of how you unlock secrets in some of the areas you'll explore.

Pink slimes are the easiest to find and are happy to eat anything so it won't surprise you that their poops are generally worth the least on the plort market. Market prices do fluctuate from day to day – that happens a little anyway but is the fluctuation is also affected by how many of that type you've sold. When I started using plorts for science/decoration projects as well as on the plort market I ended up with better prices for what I did sell simply because I wasn't flooding the market on a daily basis. If you're a real min-maxer you might prefer to wait out the market for the best profit chances on all plorts. I was nowhere near as stringent, treating good prices as a bonus but not slaving over the market. 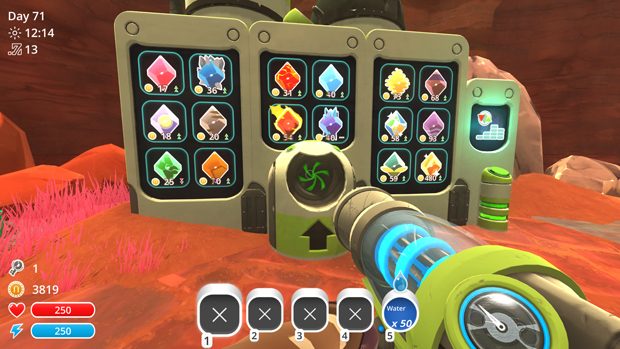 Something you learn really early on is that if a slime eats a plort from a different slime type it morphs into a bigger slime with characteristics from each. You get giant pink tabby cat blobs or glow-in-the-dark rocky blobs boinging about pooping hither and yon. The advantage of these is that they'll eat the things both base species of slime eat and the disadvantage is that they take up way more space and are harder to contain leading to more expensive corral requirements.

As an example, I had a small incident where a bunch of meat-eating explosive Boom Slimes who had gotten a) hungry and b) loose from their corral prison decimated the chicken coop I'd set up. I got back from my day's exploring to a lot of poop and zero chickens. Rather than set up a new coop immediately I force-fed the Boom Slimes some pink plorts changing their diet from only meat to everything and used up my mango backlog. They then proved even harder to contain and started setting off explosions all over the place and eventually broke through the roof of the pen. I eventually taught them all a lesson by throwing them in the incinerator and starting again with the whole area.

Other slimes are even more picky about their living conditions or are even harder to keep in place but I don't think I can really tell you about them without spoiling things I was glad I discovered for myself!

One thing I will warn you about is that if you put too many different slimes in one place disaster is only a poopsnack away. That's because you can happily combine most slimes with most other slimes for these big hybrids, but if those hybrids eat a poop from a third species of slime they turn into awful monsters called Tarrs. I didn't know what caused the monsters to appear the first time it happened and my entire ranch got obliterated. Nary a living thing remained, just death.

(You can hear about the Tarr incedent and other disasters / slime rights abuses / poop-based capitalism over on our podcast in episode 8 if you fancy!) 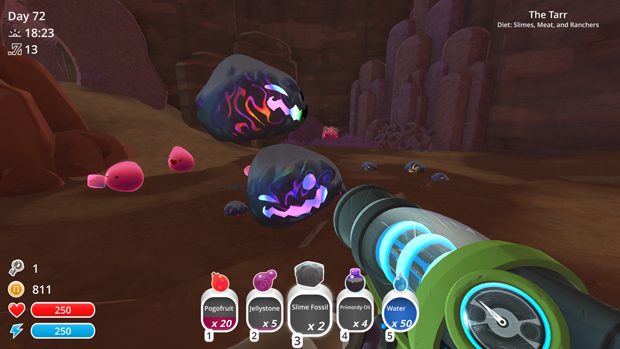 For me the balance between the gentle push to explore and the pull of bolstering my homestead worked really well. I'd go out and find new places, initially getting lost but then gradually learning the spaces as I chased new slimes or unlocked new hidden treats. I'd go out, find new foods, new Slimes, new environments and earmark the things I didn't understand so I could come back later. Creating new technology opened up more resources and gave me the impetus to return to forgotten early-game areas to see what I could mine out of them now.

At about 30 hours I feel like I'm satisfied with my experience and have started to find I'm chafing against the game's limitations. I could carry on making money so I could unlock some more items but at this point it would probably tip into grind. I've also not unlocked every single treasure pod in the world but I've done enough to satisfy myself and the rest would be a 100%-the-damn-thing-using-a-walkthrough exercise whereas the ones I already have were via organic play. 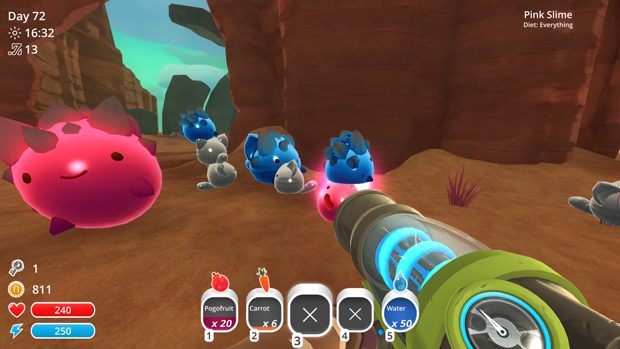 I've also noticed that, having opened up the whole map, my game loops have stagnated. I gather crops, I replenish corral food dispensers, I empty plort collectors and I cash them in. I was considering decorating my ranch a bit more extensively, but what I want to do with it will probably absolutely ruin the performance because it involves adding a load of glowing particles to walkways and beyond a certain point the game struggles with that (as you'd expect).

I did find myself yearning for more automation with the farming. By that I mean I would have liked it if you could set up little automated chains of events, so ripe crops could be sucked up and deposited directly into a food dispenser, or maybe you could set a proportion of plorts to go to the market and the rest end up in the lab. That said, I think that although it would have taken away the repetitive tasks of farming, automation would have left me with far little to actually do with my time. 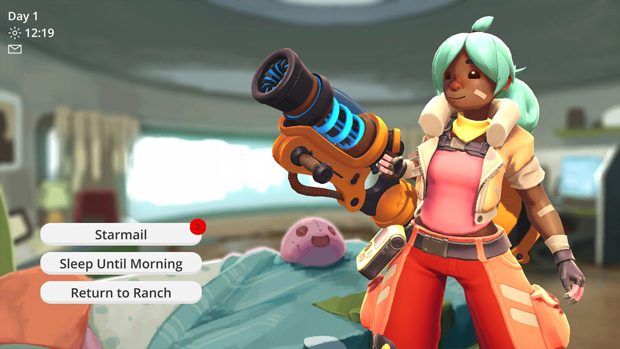 The other thing I found myself a bit irked by was just how prescribed the layout of the ranch was. This came to the fore when I was trying to decorate because I had moments where I wanted to place a patch of grass or a tree or whatever but the game didn't have a placement option in the exact bit of land I wanted to use. It's not a dealbreaker but it makes it harder for the spaces to feel like "yours" or for different save files to feel meaningfully different.

When I had started to lose steam with that first playthrough of mine I actually started up a new file to see whether I could have a different playsession in the sandbox, but with the layout of the ranch being exactly the same and the Easter eggs being in the same location and my tools getting the same unlocks, I couldn't get into it a second time around. 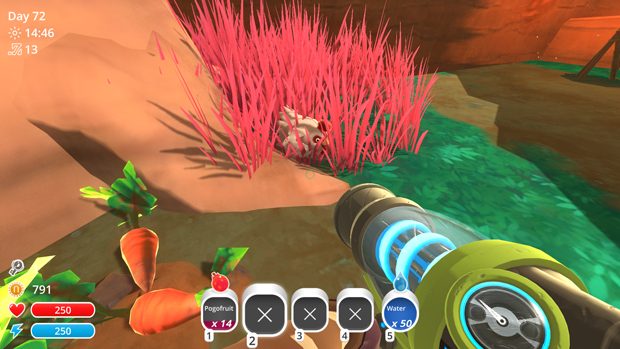 I had thirty wonderful hours collecting/harassing/cleaning up after slimes. The world itself drip-fed me secrets at a really pleasing rate for my pottering playstyle and I got so many thrills of real delight as I made my way through the alien world. A particular relationship which plays out in the form of letters delivered to Beatrix's house gradually wormed its way into my heart and, the way I read it and Beatrix left me feeling really warm and happy as the credit sequence played out.

I think Alice summed up the spirit of the Slimes when she said "It is one of the few games to capture that feeling of being SO CROSS with a creature you can't be angry at because it's so cute, like cats knocking things over or puppies being foolish."

Slime Rancher is a delightful, irrepressible thing with a manageable space to venture out into. A bouncy rainbow in a sludge of sprawling, mud-coloured shooters. I am so glad it exists.