Many games are defined by the amassing of wealth but few take such an unseemly, predatory relish in the idea as Yakuza 0. The first of Sega's Japanese crime epics to appear on PC, it's an orgy of late 80s materialism in which you don't merely earn cash by defeating opponents but punch it out of their bodies - banknotes blasting from collars and shirt sleeves with every wallop. Each of the game's 17 chapters ends with an unsavoury record of how much dough you've accumulated through assorted criminal activities, cheekily phrasing it as a multiple of a public sector worker's salary. Money is everything in the universe of Yakuza 0, a gloriously engrossing, well-written RPG-brawler with a certain, calculated hollowness at its core. Here's wot I think.

The game's plot and landscapes are, in fact, literally woven around something hollow – the so-called Empty Lot, a dingy courtyard at the heart of Kamurocho, the series' semi-fictional Tokyo red light district. It's here that you meet the first of the two protagonists, youthful Dojima clan member Kazuma Kiryu, who is busy roughing up a small-time debtor. In the other Yakuza games - foreknowledge of which isn't required to enjoy this one - Kiryu is something of a living legend, but at the time of Yakuza 0 he's just another musclehead in the trenches. This humble existence takes an exciting turn, however, when the aforesaid debtor is found murdered right where Kiryu left him. 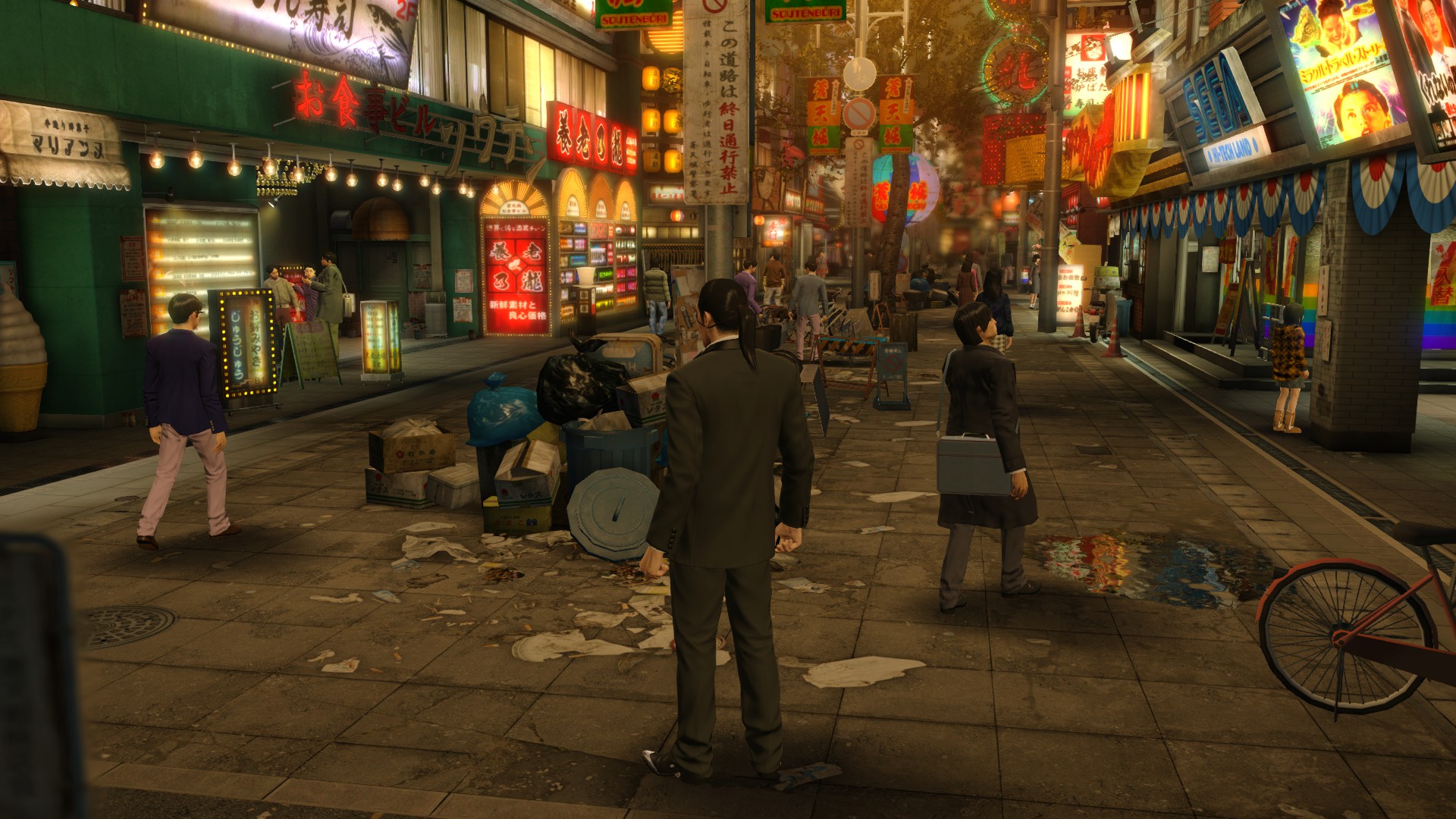 The death, for which Kiryu is blamed, has serious repercussions in Tokyo's underworld, because while the Empty Lot is so much wasteland it's also the lynchpin to a property empire worth untold sums. Kiryu's efforts to prove his innocence see him quitting the Dojima family and tracking down the lot's mysterious landlord while fending off his vengeful peers. The resulting chaos soon spreads to the Sōtenbori district in Osaka, where Yakuza 0's other and suaver protagonist Goro Majima is running a cabaret. Once a promising yakuza himself, Majima is trying to brown-nose his way back into the Tojo clan after being expelled for disobedience. To prove his loyalty, he's asked to carry out a hit, but on discovering the victim's identity, starts to question his own motivations. So begins a lavish 40-60 hour tale of betrayals, beatdowns and 10 minute cutscenes that makes the average GTA plotline look about as elaborate as a round of cops and robbers.

As a narrative prop, the gentle brilliance of the Empty Lot is what it implies about Yakuza 0's own, idiosyncratic open world format. Valuable only in the context of the buildings that surround it, this sorry square of earth holds up a mirror to a game that feels, at first blush, like so many distractions struggling to form a whole. Alternating between Majima and Kiryu chapter by chapter, you're free to explore Kamurocho and Sōtenbori as you pursue the game's main story, exposing wonderfully quirky “substories” and getting your teeth into an opulent array of minigames. The options range from rhythm-matching karaoke to UFO Catcher machine, poker dens, batting cages, mahjong parlours and many more besides. In themselves they can feel a bit vacuous and throwaway, more designed to preoccupy than engage your interest. Roll them all together, however, and there's something irresistible about the result. 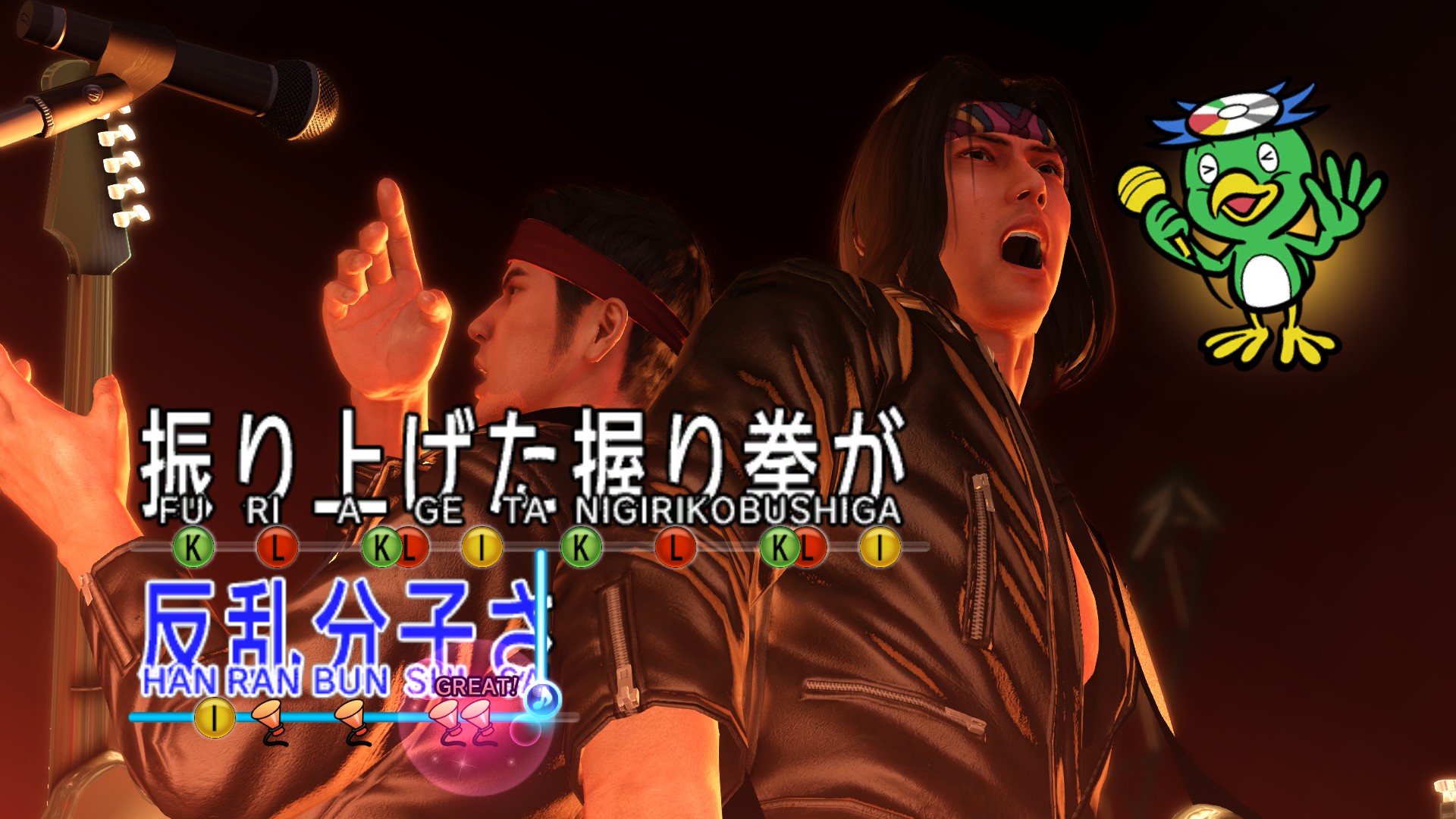 Partly, this is because Yakuza 0's optional activities actually give life and solidity to its world and story, where so many open world side activities are just there to fill time. True, they're opportunities for grinding – you'll need plenty of dosh for new fighting moves and stat buffs if you want to steamroll the bosses that close out most chapters – but they also sell you on the game's sumptuous period recreation. Certain stories are tethered to certain mini-games, and even missions that are little more than shopping runs (e.g. buy five specific brands of booze for a group of bums with secrets to share) serve to illuminate an era defined above all by its commodities.

This latter point is especially apparent in Yakuza 0's staggering quantity of foodstuffs. They all do basically the same thing - restore your health or special moves bar - but all benefit from loving individual descriptions, and tracking each dish to the place that sells it helps the setting sink into your brain. The urban environments themselves are fascinating, particularly once you venture beyond their bustling squares and boulevards to the harder-up streets that stretch behind the omnipresent neon signage. There are labyrinths of pokey one-room saloons patronised by dealers and journalists, and waterfronts where you'll find homeless people passing around a bottle. There are streets lined with massage parlours where you'll be cat-called by sex workers on cigarette breaks. 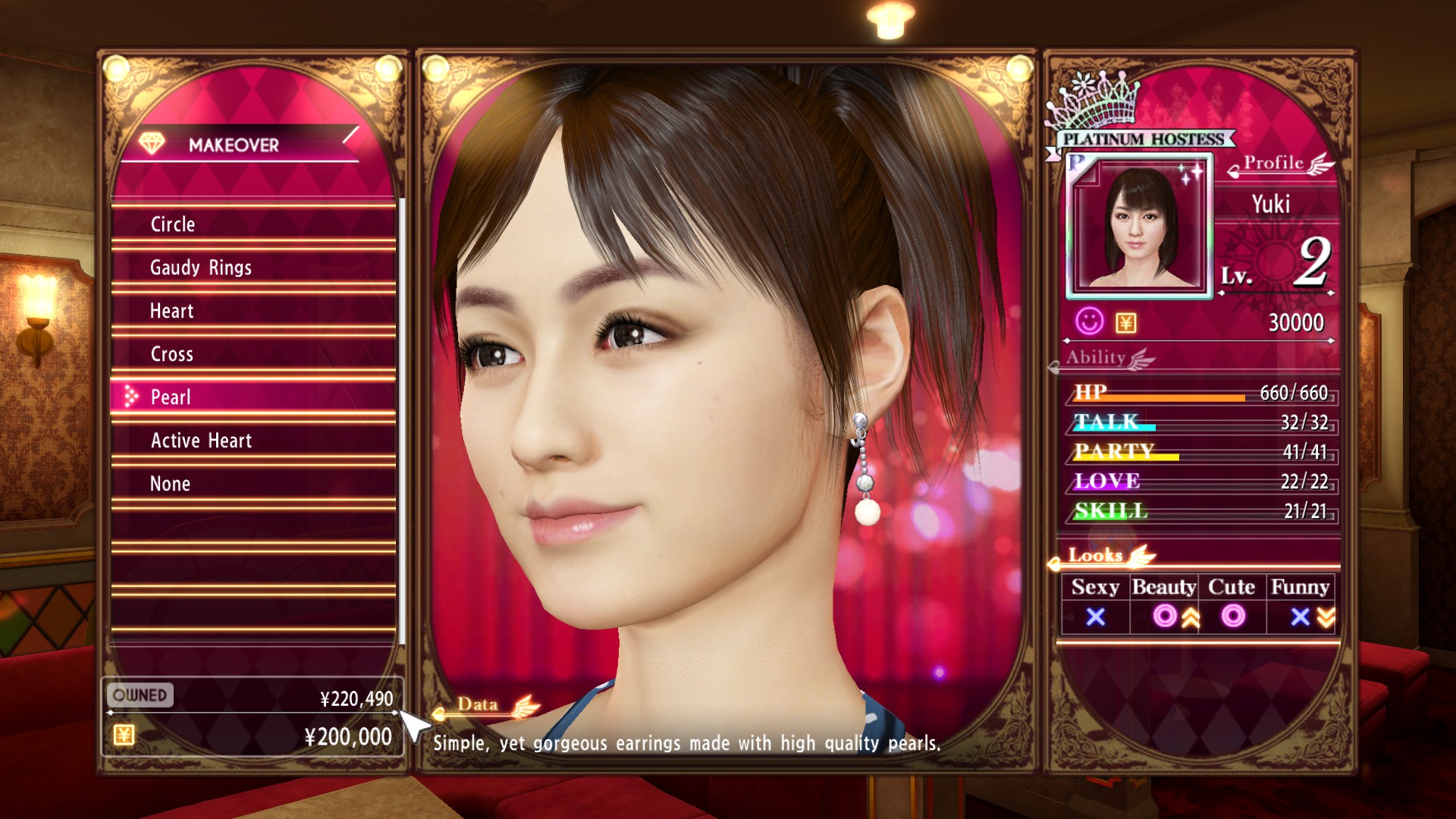 If the sights are the more obvious draw, Yakuza 0 also shines in its writing, which I think is rivalled only by The Witcher 3 in lending charm to recurring mission templates and weight to otherwise bitty errands. The mission setups vary enormously in tone and content, drawing on a vast yet memorable cast. Aided no end by some sparkling localisation, they strike a strange but convincing balance between whimsy, menace and melodrama. One moment you're distracting a crowd so that a busker can sneak off to the loo, the next you're joining a TV crew to help film an advertisement - guessing at the meaning of shoptalk like “grocer the props”, while a temperamental director looks on. One moment you're schooling a timid dominatrix on how to humiliate a client, the next you're out delivering pizza.

One area where the writing and mission design do merit question is in their treatment of women, who exist largely to be kidnapped, drugged, exploited, leered at or executed to make a point. You can, of course, excuse all this as intrinsic to the era or the yakuza in general, topics on which I'm ill-equipped to comment; the trouble is that the misogyny also bleeds over into the tools and reward systems that frame these events and which can't quite be defended on grounds of authenticity.

The many applications of unreal ladies aside, Yakuza 0 is defined by its flashy, mashy combat system, which sees you switching in real-time between three styles per protagonist (in addition to weapons with finite usages). Brawls are frequent, as packs of hoodlums and gangsters loiter throughout each city, but the setting never becomes a warzone, as fights are sealed off JRPG-style from exploration. This may sound awkward, but the execution is very stylish: when enemies make contact, nearby citizens form an unbreachable ring of yelling onlookers, so that each dust-up still feels like part of the city's ebb and flow even as it's kept at a remove. 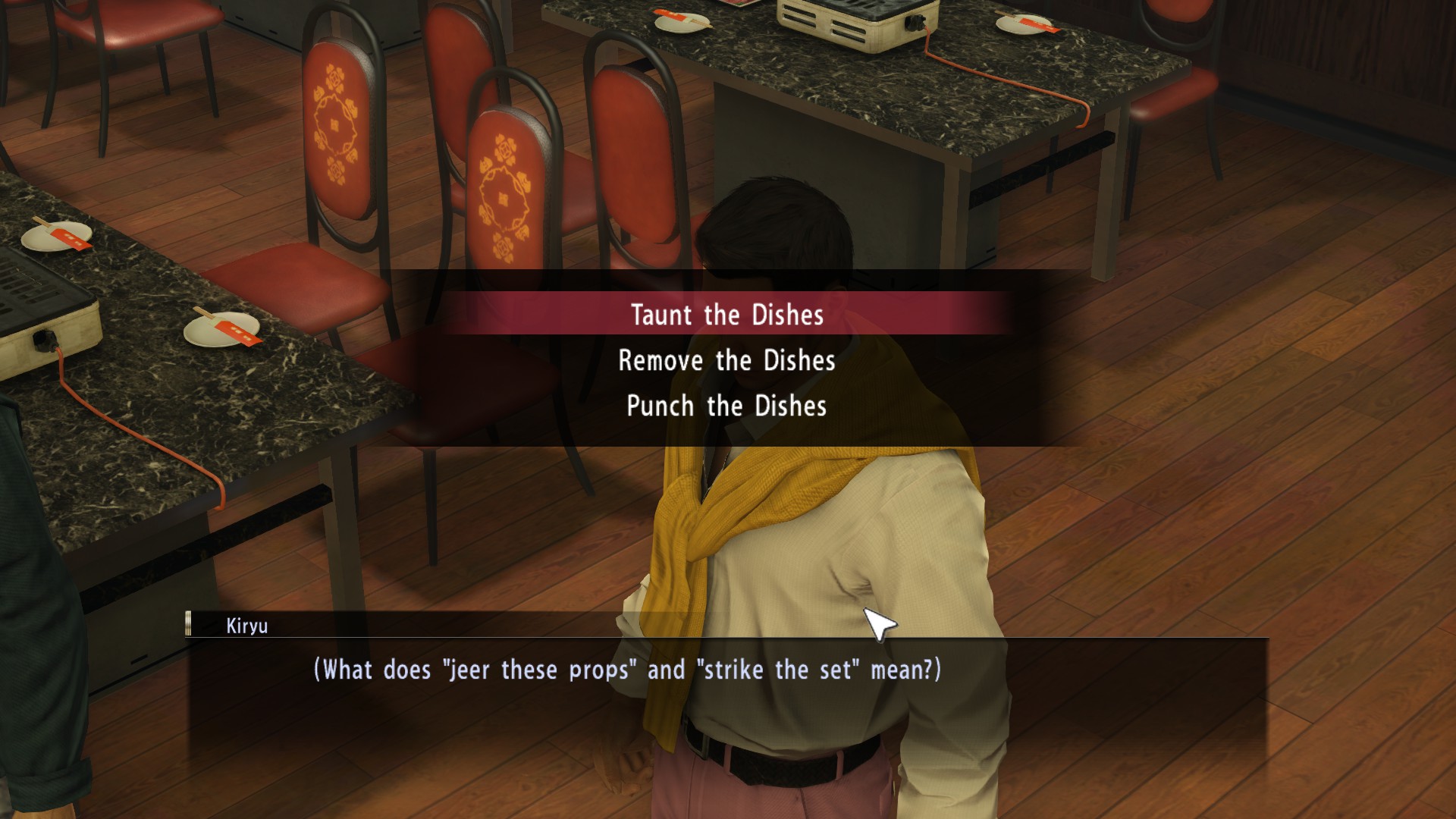 The fighting styles themselves comprise light and heavy attacks, blocks and dodges, plus special moves that are performed once you've filled up your Heat gauge by inflicting or receiving damage. Acquired at set points in the story, they blend techniques recognisable from martial arts with outbreaks of sheer clownishness. Kiryu's opening Brawler style lets him barge through strikes and perform skull-bursting environmental takedowns. Rush sees him weaving on the spot while unleashing rapid flurries, while Beast trades pace for the ability to smack people with furniture or, in a pinch, their friends. Majima's basic Thug style lets him disarm adversaries and perform oddly non-lethal neck snaps, while Slugger involves balletic usage of a baseball bat. Breaker, finally, is about 360 degree crowd control combos inspired by street dancing, with a freeze pose thrown in now and then to fake opponents out. There are also two secret styles that are unlocked by completing certain sidestories - I'll let you find out about those on your lonesome.

Initially on the basic side, these styles mushroom with time and investment into surprisingly flexible instruments of face-rearranging, though I'm not sure Yakuza 0 is a brawler on par with, say, Devil May Cry. The game's lock-on system can be a bit temperamental, particularly as you unlock moves that rely on it. You can't manually cycle targets, for one thing, and the system auto-locks to whoever's in front of you, leading to situations where you'll start wailing on some scrawny mobster recruit when you really should be focussing on the fat guy with the sword. 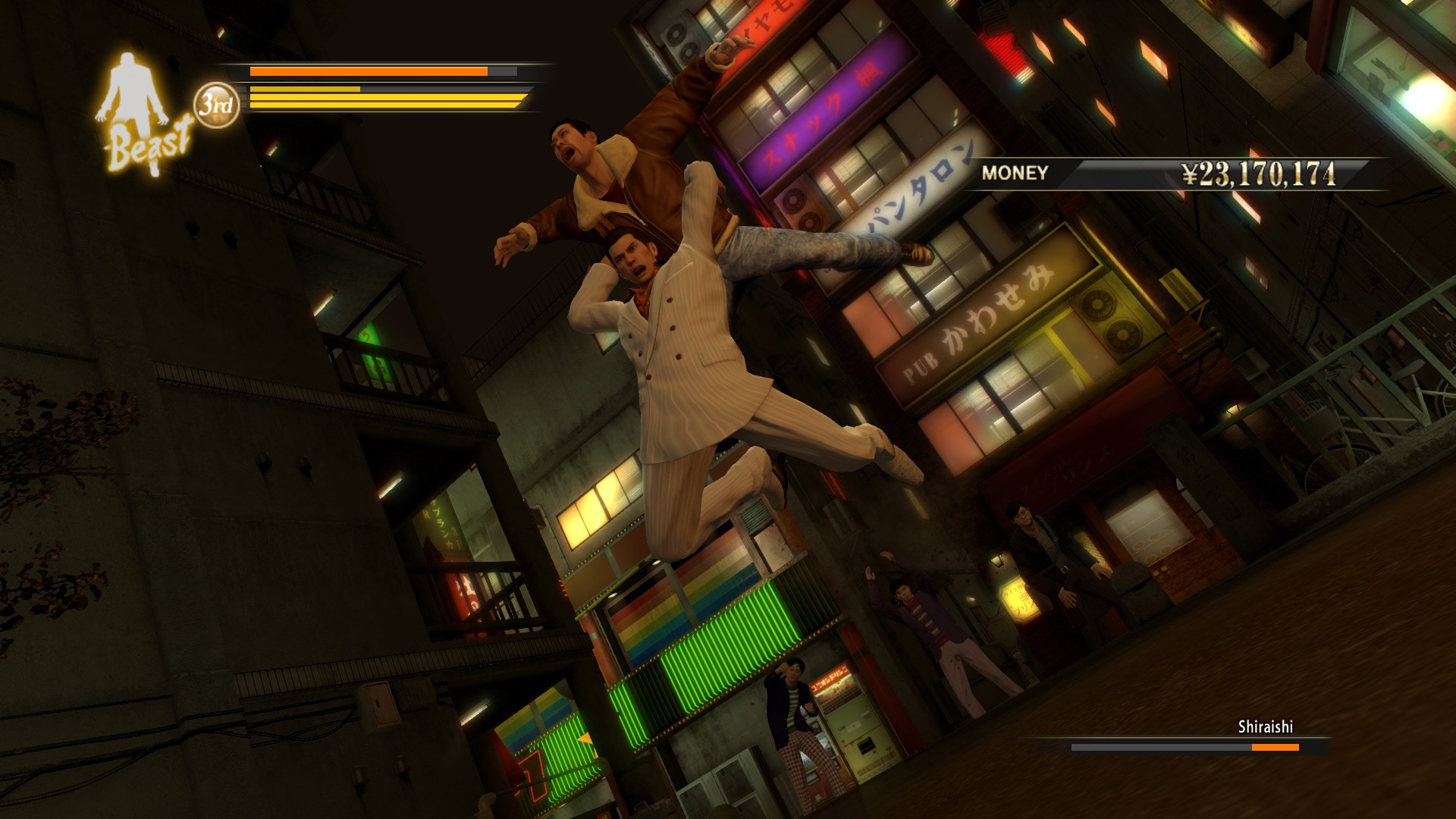 As regards the quality of the port, I have very few complaints. Currently, the game quietly defaults to running on your integrated graphics chip if you have one – after struggling to get anywhere on low/medium settings, I fixed this by forcing it to run on my i7 laptop's dedicated card using the latter's settings panel. I've also experienced a couple of crashes while hammering controller buttons a little too frantically. Beyond that, though, Yakuza 0 runs like a dream and scrubs up beautifully for all its relative age, even at lower resolution settings with the draw distance reined in. The motion capture during the posher, pre-rendered cutscenes rivals Naughty Dog's achievements, and the splendour of the urban backdrop soon had me disabling my minimap to get a better view.

Yakuza 0 is an ornate and bustling epic that deftly transforms a landscape of glittering loose ends into something like a tangible society - the crucial connective tissue being missions that tell you things about the world, rather than just giving you something to do within it. It's a game about rolling up property, making fat stacks, perving over damsels and wrecking faces as you wage war on a criminal empire. But it's also about finding the humanity beneath the filth and lucre, about the little tragedies and comedies in the corners that are the real lifeblood of these cities. Yakuza's debut on PC is long overdue, but you couldn't have asked for a stronger start.