Yucatan is a Mexican Day of the Dead themed, neon-soaked, low poly adventure that wants to bring Metroidvania style game design to the arcade racer genre. I mean... throw the word "blockchain" in there somewhere and I think this adequately sums up everything the internet is into right now? Unfortunately, you've got a bit of a wait on this, as Yucatan is set to be released on PC and PS4 in early 2019. The good news is that there's a demo available right now.

And that demo is right here.

I just got done doing a bit of drifting and consider me excited for 2019. I mean, I already wanted to get out of this Hell-Year, but this is sure something to look forward to in addition. There's just so much going on here that I cannot believe this title isn't on more gamer's radars.

The full game is set to feature two hours of single-player racing, focusing on challenge-based driving where players must beat the track and the clock. Yucatan takes traditional arcade-racer tropes and turns them around; players will unlock shields, boosts, and bombs as permanent abilities and then use these to unlock new areas in the style of a Metroidvania. The art style is bold low-poly 3D, influenced by Mexican Day of the Dead themes. You drive a retro-futurist space Cadillac along neon soaked floating highways.

The game's summary on the official site is a little more mysterious than the rest of this information.

Yucatan is a journey of self discovery. It heals wounds and completes tax returns. It goes fast, and it goes slow, and you don't have to tell it too because it also reads your mind. Yucatan provides the salt and the sizzle, the bang and the beef, the rinse and the roulette. Yucatan gives you everything. Yes. Finally. Thirst is no more. Hunger is no more. Want and need are the past. Yucatan is the future. Yucatan is your future. Release yourself and embrace your future.

Yucatan is being developed by Joe Bain, an independent developer based in Scotland who has worked on games for Adult Swim and OKGo. He has been working on Yucatan for over two years with help from American low-poly artist Ethan Redd and English sound designer Dicky Moore.

Also, can't help but share this bit of background from the game's press packet. I really need to meet these folks.

The idea for Yucatan came in a vision, one dark night in 2012. Hairy Heart founder and boss-man, Joe Bain, was tripping out, probably watching your favourtie anime or listening to that band you saw once at that festival. In the midst of a wild fever-dream, the main character, Charlie Skullface, appeared and recited a long game design document, including online multiplayer. As Joe furiously wrote down the long, complicated design document, a postman knocked on the door. The delivery of the rare issue #9 of the 2015 reboot of DC's Omega Men, interrupted the reverie, and the game design, fresh from the skull's lips [skulls don't have lips], was lost in the incoming breeze. Hence there will be no online multiplayer.

Metroidvania Neon Arcade Racer. What a time to be alive. 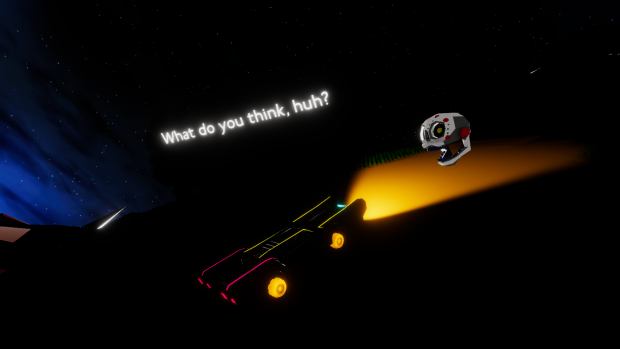