If you click on a link and make a purchase we may receive a small commission. Read our editorial policy.
Premature Evaluation is the weekly column in which Steve Hogarty explores the wilds of early access. This week, it's zombies. Of course it is. When is it ever not zombies?

Just outside of my hometown there’s an air rifle shooting club owned and operated by large men whose disposition barred them from joining their local territorial army. You know the men, they smell like sawdust and are all named Colm and wear tattered promotional t-shirts from a local shotgun pellet and rat poison manufacturer called “MAD DOG FIREARMS AND FARMING SUPPLIES” and whose logo is a threatening looking cartoon bulldog holding a shotgun in one paw and a sack of premium cattle feed in the other.

There, in that place with those men, I spent an afternoon learning how to shoot a hole in a piece of paper at the far end of a barn using a gun that runs on compressed gas. But not before an extensive safety lesson, which detailed how to properly load the metal pellet into the rifle’s chamber and, most importantly of all, how I should never point the end of the gun at anyone I didn’t want to severely bruise. When I unthinkingly twirled around with my loaded peashooter having shot a good bullseye, the melodramatic instructors reacted as though Al-Qaeda had began a ground invasion of Ireland, throwing themselves to the floor and crawling for cover like they were in a Call Of Duty tutorial. 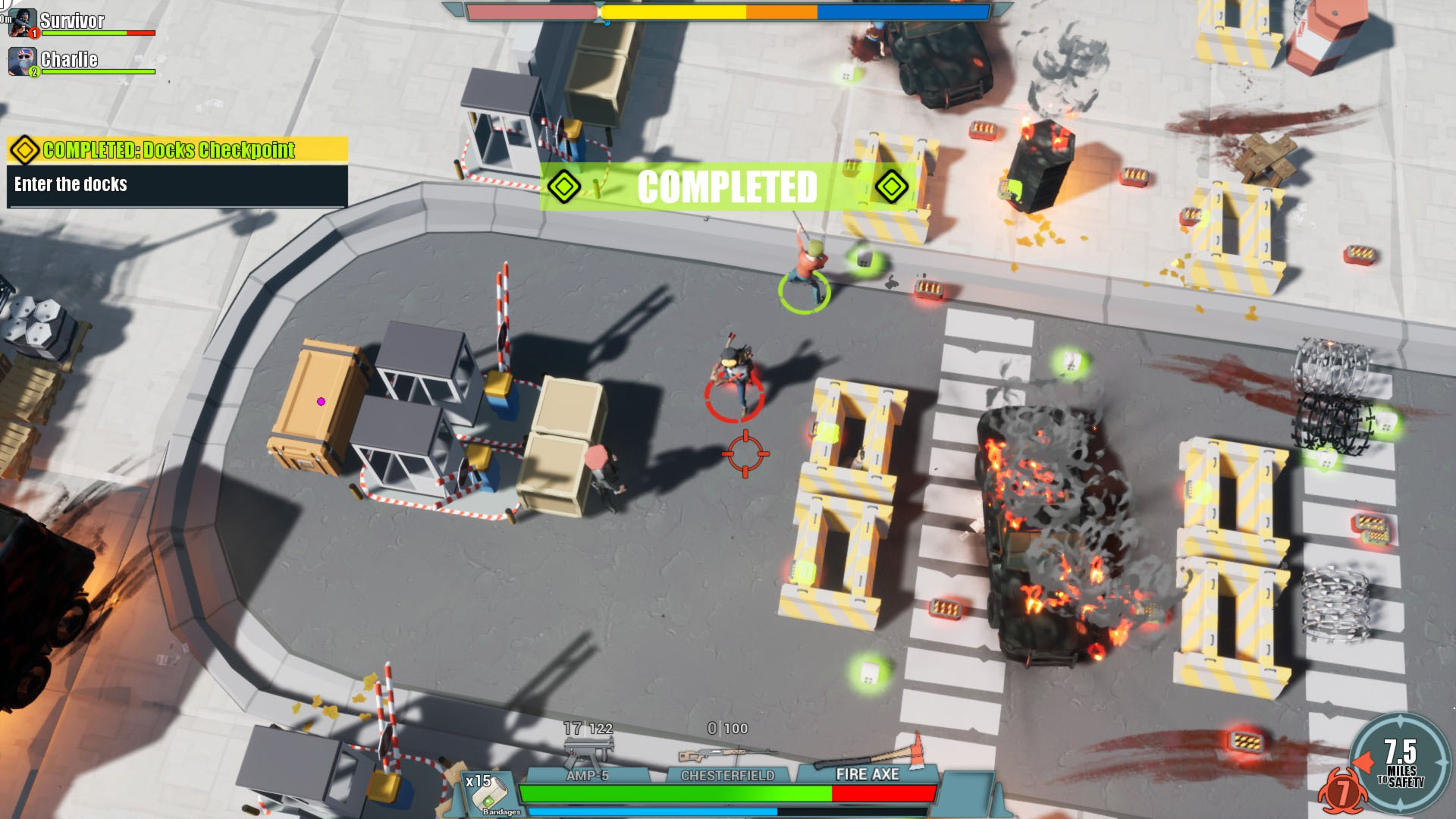 In 10 Miles To Safety, nobody observes this most rudimentary pillar of gun safety. This is a top-down zombie shooter in the vein of Project Zomboid, in which you must survive an apocalypse by blasting the undead and looting buildings to collect the weapons and armour and crafting materials you need to barricade yourself indoors every night. You can happily play the whole thing offline, or with friends, but there’s a drop-in, drop-out, ‘come in the door’s unlocked’ multiplayer mode you can switch to at any time. As you play, random human survivors might appear alongside you for a while, in theory doubling your chances of survival, but in practice utterly decimating it. Friendly fire ensures that, inevitably, one of you will eventually stumble in front of the other survivor’s shotgun just as the trigger is pulled, like Kevin Costner taking a gut full of shrapnel for a zombie Whitney Houston.

But when you’re not accidentally mowing down other human players, the co-operative stuff works pretty well. There’s a day-night cycle lasting just a couple of minutes, lending 10 Miles To Safety a predictable ebb and flow. During daylight hours the zombies are those harmless, stumbling drunk sort, giving you enough breathing room to explore buildings and loot any containers you can find. There you’ll find weapons and armour of increasing rank and rarity, as well as augmentations such as extended clips, scopes and silencers. Crafting materials are scattered about the place too, used for constructing the barricades and traps required to survive the night, as well as improvising throwable molotovs and nailbombs. Just as in every other apocalyptic wasteland, regular people seem to possess this worryingly prior knowledge of how to cobble together a bomb using nothing but hairspray and an alarm clock. 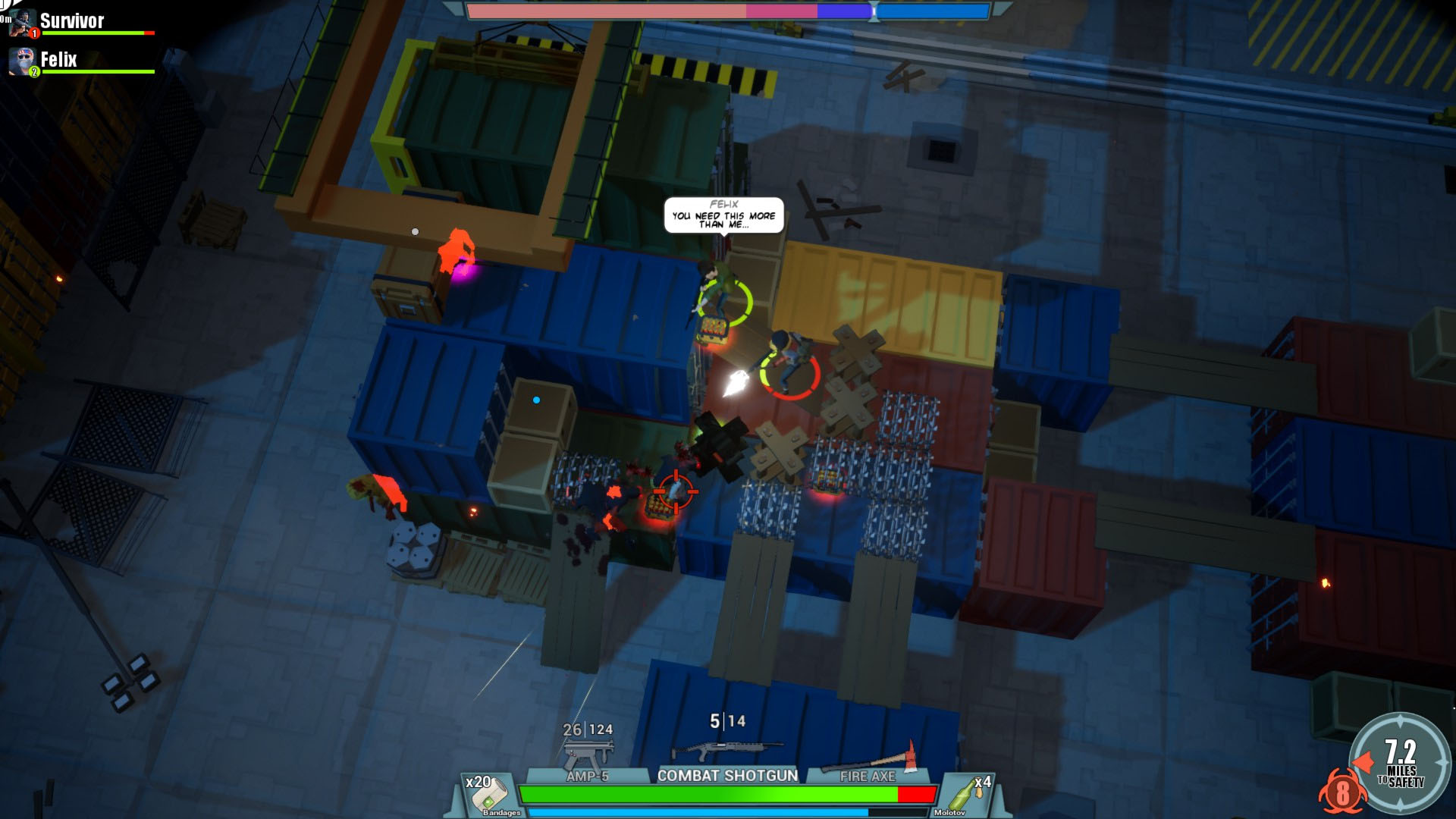 At sunset you’re given a few minutes of warning to find shelter for the night. The first stage of the game is set in a randomly generated few miles of generic American suburbia, presenting you with plenty of abandoned semi-detached houses and garages inside of which to hole up for the evening. Hitting Q switches into a tile-based building mode, where you can board up windows and doors or build rows of wooden fences and razor wire you can shoot over.

You quickly learn which of the half dozen or so types of building are best suited to fending off the faster and more vicious night-time zombies. Churches have those big dumb windows for gazing out at the wonder of God’s creation, and so make terrible bunkers in a zombie uprising. Upstairs bedrooms are tight spaces where you’re more likely to take a misplaced friendly bullet to the head, but they force enemies into a bottleneck at the top of the stairs, where they’re more easily gunned down. 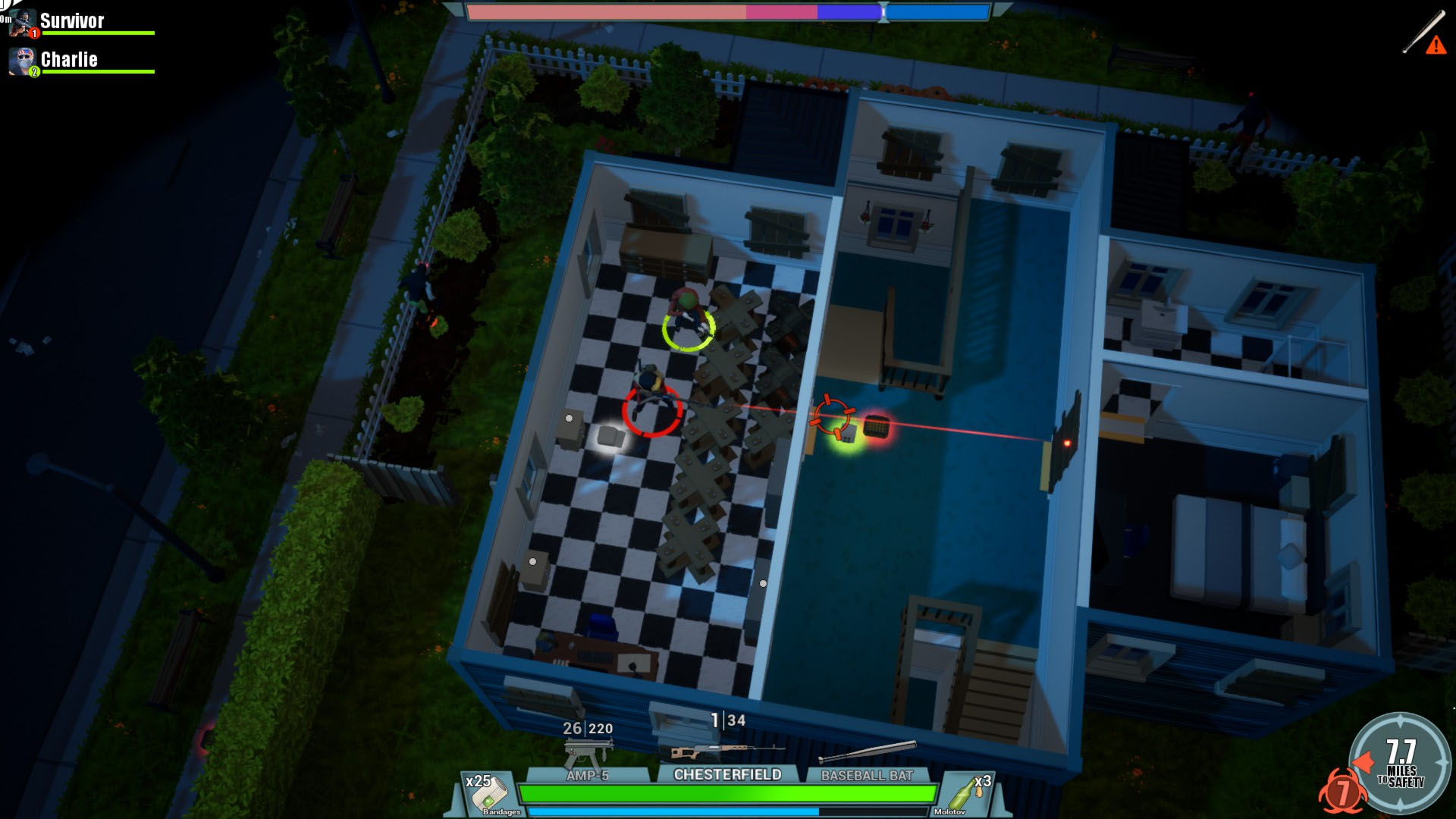 Though you’re free to stay put as long as you like to build up your resources and find better weapons, inciting you to keep on moving is an urgent looking compass at the bottom of the screen, which points towards the game’s ultimate objective: an army base ten miles away in a randomly chosen direction.

The world is unexpectedly vast and you cover this distance at a snail’s pace, over several hours of play and dozens of nights. But while you graduate through a bunch of themed zones on your way to the army base, from suburbs to dockyards and train depots, the local environments loop like the scrolling backgrounds of vintage cartoons, offering up only the same handful of homes, shipping containers and coffee shops in which to mount your nocturnal defence. 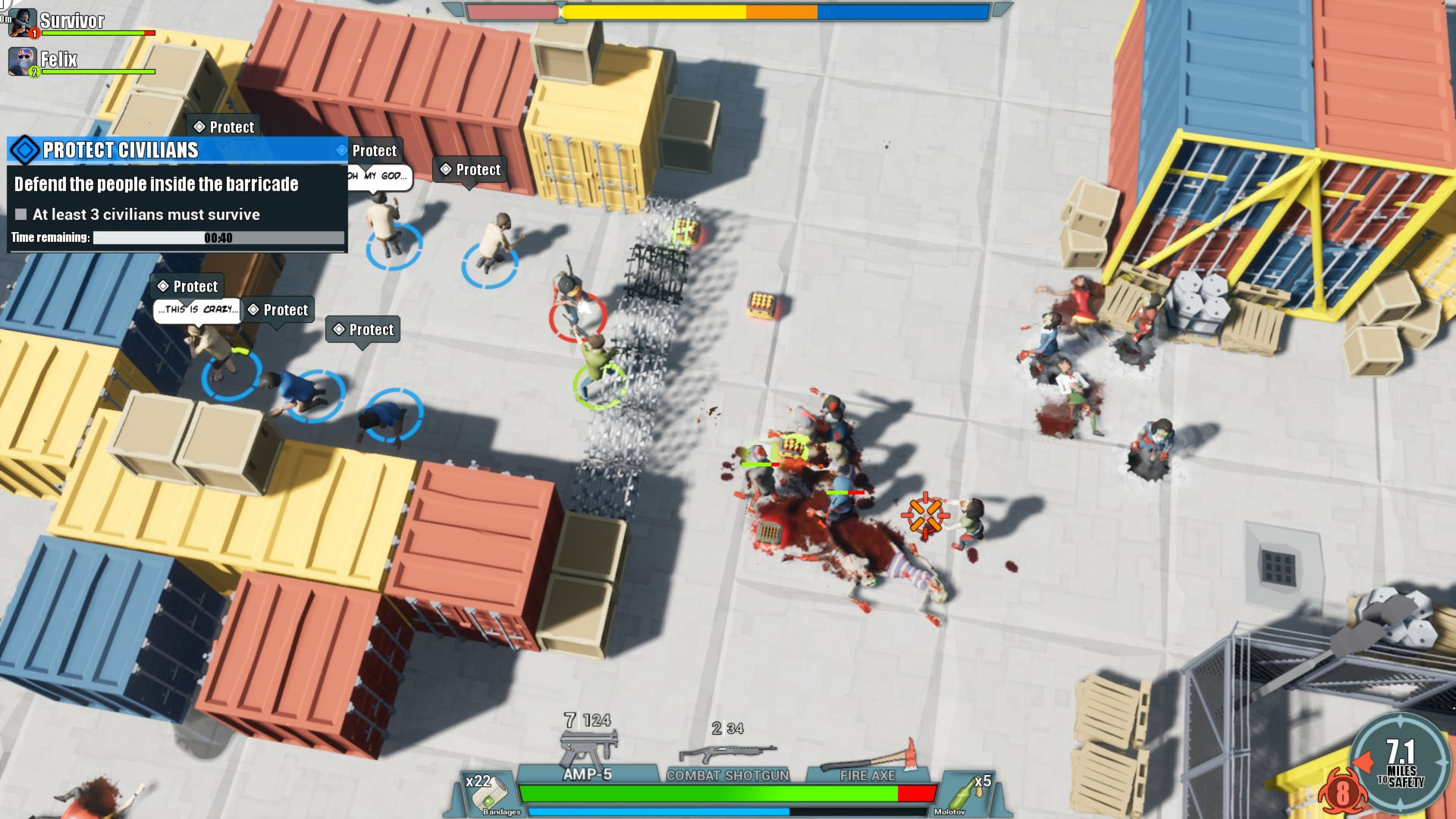 This early access version is also pretty light on the variety of special events that you encounter too. Timed challenges in which you must protect medics and civilians for rewards quickly repeat themselves, until you’re sufficiently bored by the sight of them that you begin to sprint on past without bothering to stop and help. Right now, there just isn’t enough stuff to fill those ten long miles you need to traverse to reach safety.

By the fourth or fifth furlong you’ll have seen most of what this zombie uprising has to offer, and the sweet release of another player blasting the side of your face off with a badly aimed volley of submachine gun fire will be all the excuse you need to call it quits.