Okay, so technically it wasn't until 2012 that PC players got to skate, tag and grind for themselves, but June 29th marked the 20th anniversary of the original release of Jet Set Radio (or Jet Grind Radio, as it was known Stateside at the time). An anti-establishment skating action game with a killer soundtrack, Jet Set Radio was the hippest thing ever to burst onto the scene of the Dreamcast’s short lifespan.

It may have failed to help turn Sega’s fortunes around (but hey, their loss in the console business was our gain) but it remains a beloved favourite that still has an influence on games today. With small but still thriving communities of fans, the time seems ripe to talk about games being developed now that are looking to Jet Set Radio's inline skates for inspiration, as well as dreams of a potential sequel.

The most obvious of its influences is its pioneering use of cel shading, which rebelled against the industry’s pursuit of more pixels and photorealism. Opting for a more distinctive, stylised approach, 3D characters in Jet Set Radio were transformed into living cartoons that still look as pumping fresh now as the day they were conceived.

The style has its detractors, but it warms my cockles whenever I see developers embracing it, from the gorgeous Moebius-inspired Sable, to Revolution Games’ return to Union City with Beyond A Steel Sky, with art direction from renowned comic artist Dave Gibbons. I even did a fist-pump when I saw anime hack-and-slasher Scarlet Nexus amongst the line-up in Xbox’s next-gen reveal. 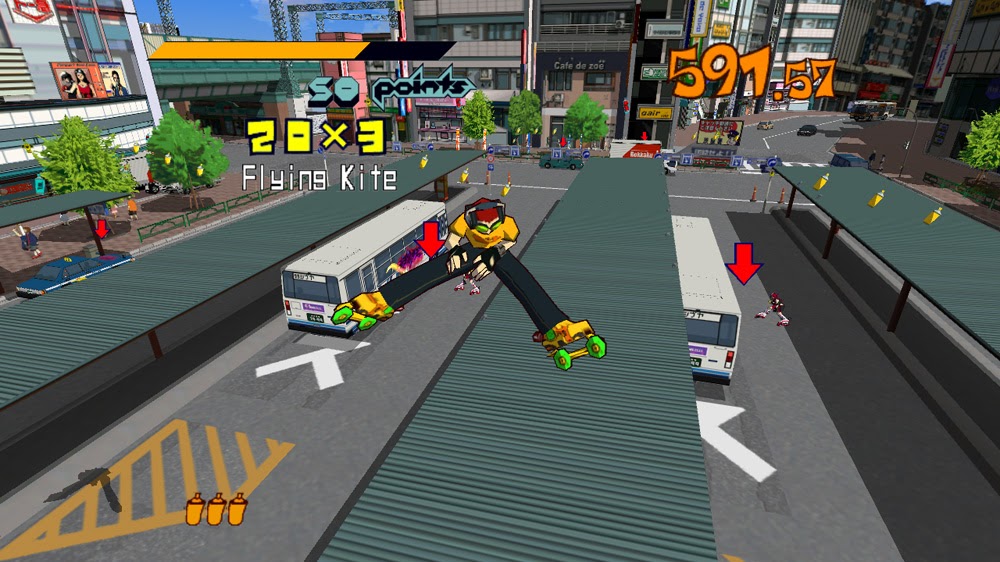 Back in 2000, as an art school dropout looking to get his foot in the door in the games industry, Jet Set Radio had an immediate impact back for Jesse Sosa, creative director of Dinosaur Games.

“Jet Set Radio was unlike anything I had seen before,” he tells me over email. “My art went from emulating the house style of Image Comics towards a more stylised, anime style. [Xbox sequel] Jet Set Radio Future cemented my love for non-photorealistic rendering so much that I actually turned down job offers during my career to work on extremely large and popular franchises at huge, successful studios because the realistic art styles were just too boring for me.”

It’s a shame, then, that Sega never sought to revive the series, instead making do with an HD port of the original. Nonetheless, the re-release managed to bring the cult classic to a wider audience, which may explain why there are more examples of developers inspired by Jet Set Radio in the years that followed.

One of these is the crowd-funded Hover from France-based Midgar Studios. While it swaps inline skates for urban free-running akin to Mirror's Edge, Hover's cel shaded cyber city and rail-grinding has Jet Set Radio written (or sprayed) all over it. 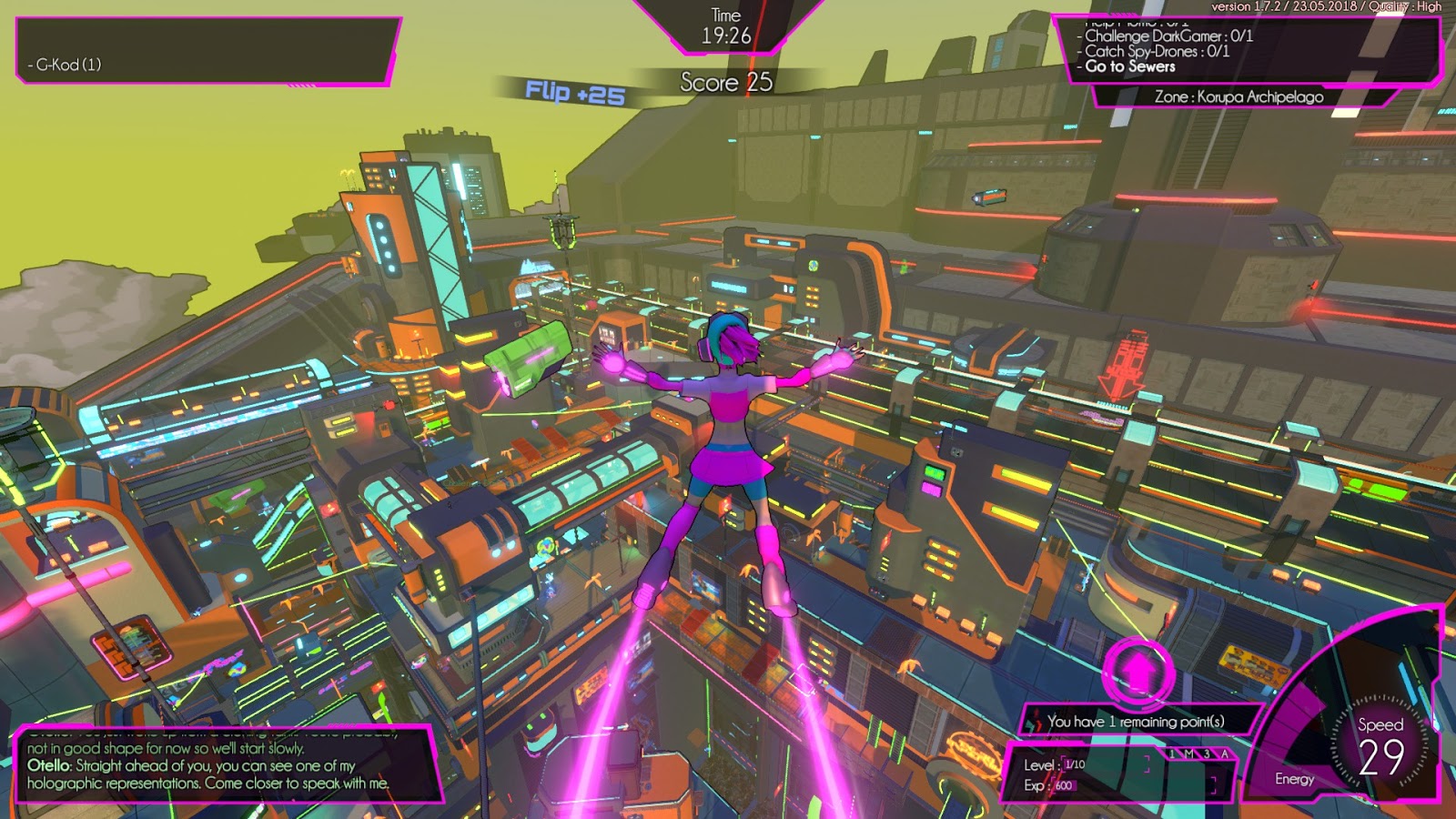 Artistic director Charles Vesic was particularly taken by Jet Set Radio’s architecture: “The neighbourhoods fit together in a coherent manner and complemented each other in terms of level design and ambience. I realised that a city could be a wonderful playground in a video game!”

Hover’s city specifically has more verticality, to fit with its parkour movement where you can climb on every single building, and it's also filled with lots of missions and codexes as a way of deepening the story (albeit a rather daft one that has a revolt of gamers as a symbol of anti-authoritarianism). Perhaps its biggest feat was getting Jet Set Radio composer Hideki Naganuma himself involved.

“When we introduced the game on Steam Greenlight, before the Kickstarter, many players expressed that they wanted Hideki Naganuma’s music in our game,” Vesic explains. Hover shared obvious traits with Jet Set Radio from the start. “Naively, as a small indie team, we didn’t take it seriously. But the players took it to Hideki on social media. One day, when someone asked him the projects which he’d like to work on he put Hover on his list!”

According to Naganuma, it was “love at first sight”, so when the team did reach out to him and gave just a little direction on the game’s environments, he came back with two brand new tracks, one which is used for the trailer. 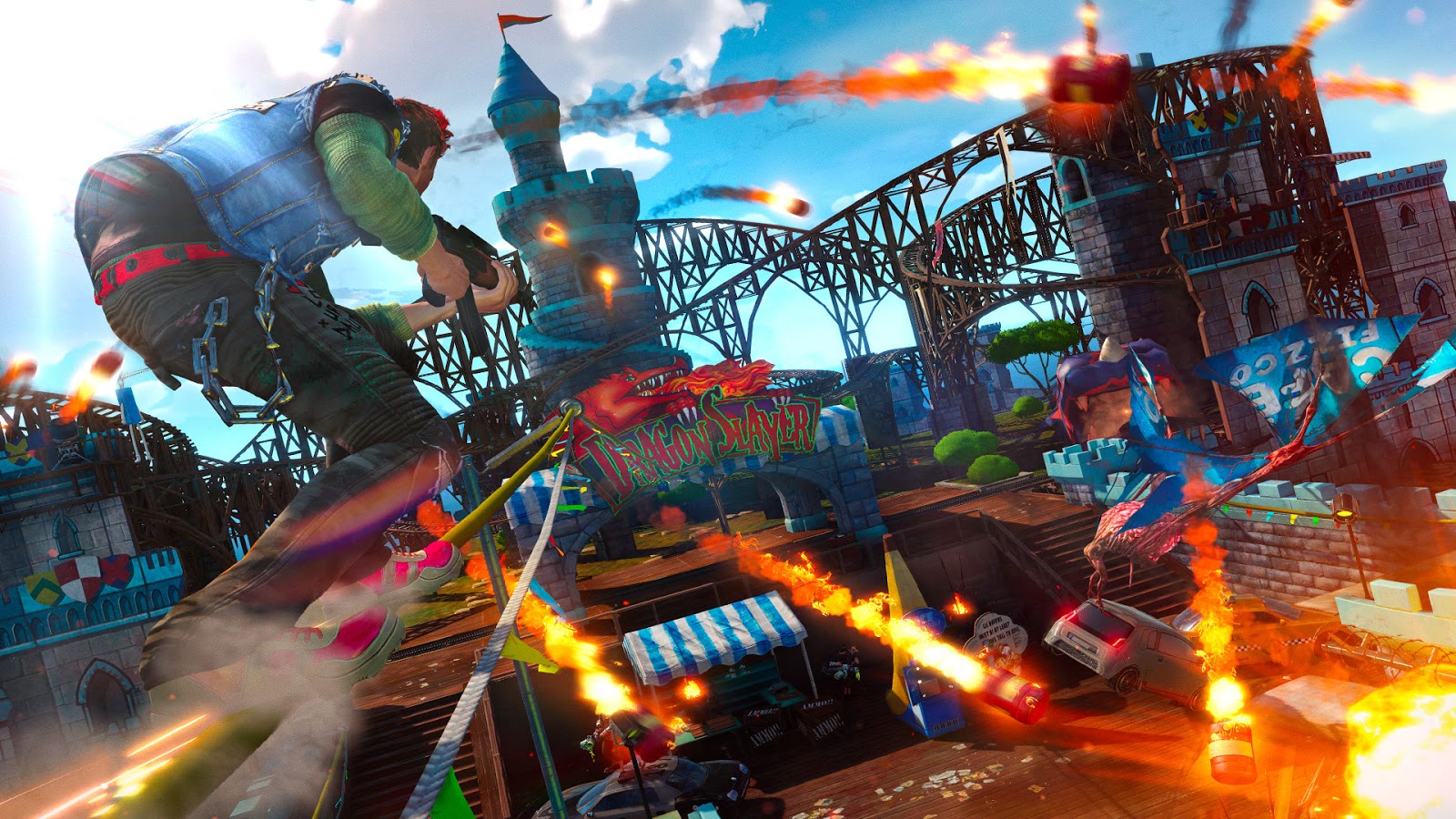 Besides an indie tribute act, Insomniac’s Sunset Overdrive arguably comes closest to a modern Jet Set Radio on a triple-A budget. It absolutely nails the thrill of traversing a sunkissed open world, where you can not only grind on telegraph wires but ride underneath them, as well as wall-run, air-dash, or hell, just flip yourself up from the ground. On the other hand, its focus on shooting hordes of energy drink guzzling mutants flies in the face of Jet Set Radio’s concept of love and nonviolent resistance through graffiti.

What the above games have been missing however are roller skates, and what’s a Jet Set-alike without roller skates? Currently in early access on Steam, Neon Tail does have you racing and grinding on skates, while a female protagonist with a cute pink bubblegum aesthetic might remind you of Ulala in Space Channel 5. On the other hand, the three-person dev team are also cautious not to have people drawing too many comparisons.

“I think the main reason my game keeps getting compared to Jet Set Radio is really because there aren’t any other games to compare it to,” Fei, one of Neon Tail’s developers, explains to me over Discord. “You can't name another famous and beloved video game about roller skating. I don't think if I were making an FPS people would say Doom had a huge influence on me. I'm not saying Jet Set Radio is not important to me, but my works, style and philosophy is far from only coming from this game.”

Indeed, he cites PlayStation titles Persona 5 and Gravity Rush, as well as Sunset Overdrive, Borderlands and the Batman Arkham series as other important influences, and describes Neon Tail more as “an open world adventure RPG, with rollerblades”. I look forward to seeing how the final product turns out. 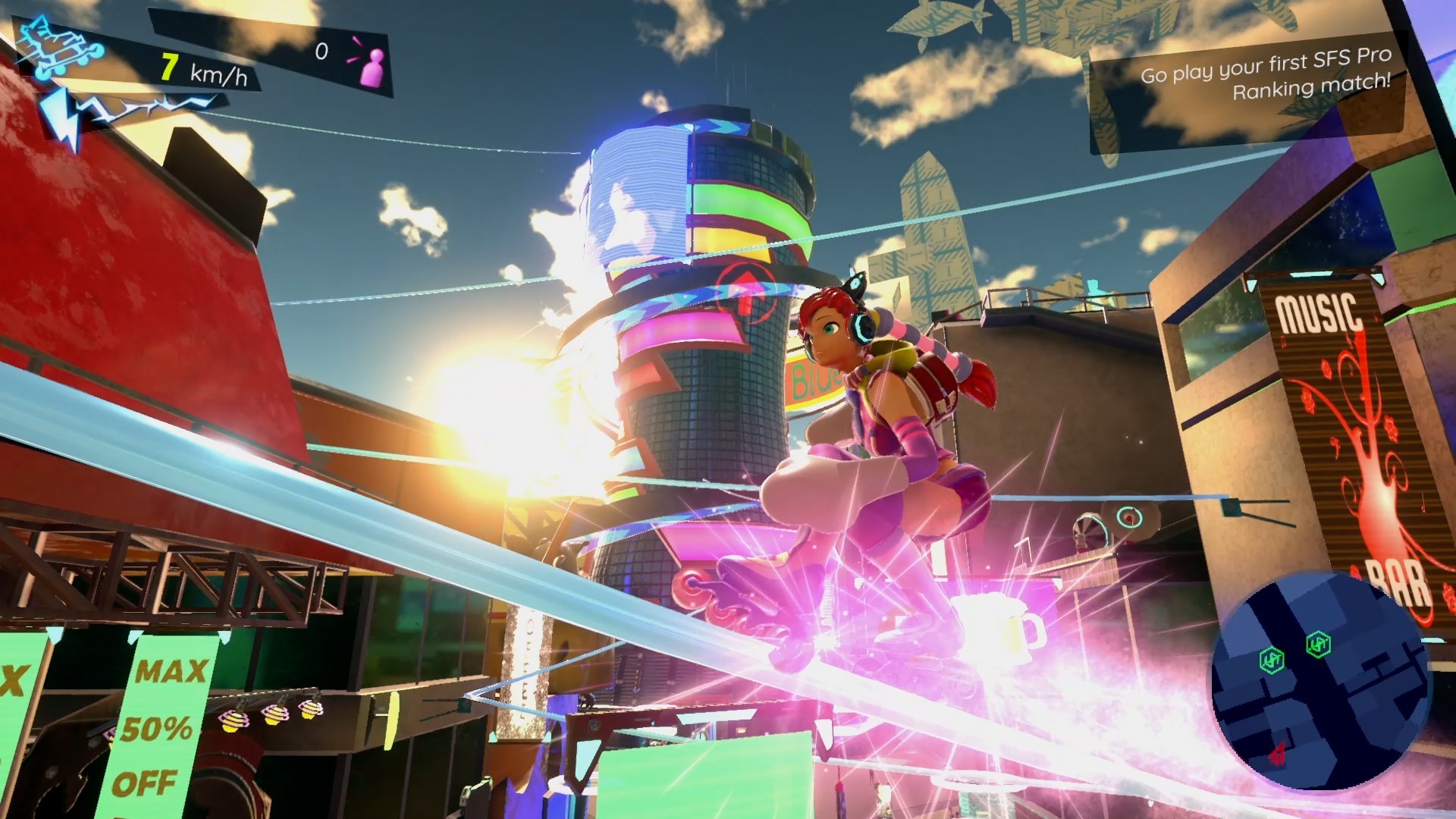 But in searching for these alternatives, I also realise that none quite scratch the itch if what you're really pining for is a new Jet Set Radio. This brings us back to Dinosaur Games, who were the closest to making that dream a reality with a pitch for Jet Set Radio Evo.

“In 2016, we were working on an art demo called Project Halftone, which was an idea I had to take the Jet Set Radio art style and push it a bit further,” explains Sosa. “After we were told that we couldn't work on that project anymore, we decided to just take the idea and work on it on our own time, going all the way and creating an homage to Jet Set Radio instead.”

At GDC the following year, this art caught the attention of Sony, who expressed interest in seeing the characters in motion. Sosa and his team spent a week cutting together the short visual proof of concept, the results were enough to make any fan go Jet Set Radio gaga.

Despite wowing the Sony execs, Sega (specifically the Atlus division) ultimately turned it down without providing a reason. On reflection, Sosa concedes it may have been down to bad timing - although a pitch in early 2017 would have just been at the cusp of the revival of other classic Sega franchises, from Sonic Mania to Streets Of Rage 4, as well as the recent announcement of Alex Kidd in Miracle World DX.

But Sosa also included a full high-budget game design document with his pitch, the details getting me all excited just thinking could have been.

“We wanted to lock the soundtrack to a specific BPM to make it part of the gameplay,” he explains. “This would mean that tricks done to the beat of the music would give the player bonuses.” The environment was going to be a mini sandbox, where the player would be free to explore a portion of Tokyo-to and use their abilities to reach new areas and encounter new characters.

"Along the way, they would take over rival gang territories and gain access to their hangouts, which could be customised. Combat would be redesigned to be more modern with the intent of feeling like the player is performing aggressive tricks rather than just spraying the enemy with cans of paint.”

All which led me to wonder, if Dinosaur Games can’t get the licence, are there still plans to run with their vision anyway, without or without Beat or Gum? Despite being occupied with other work in that time since, Sosa tells me that the dream is still alive. 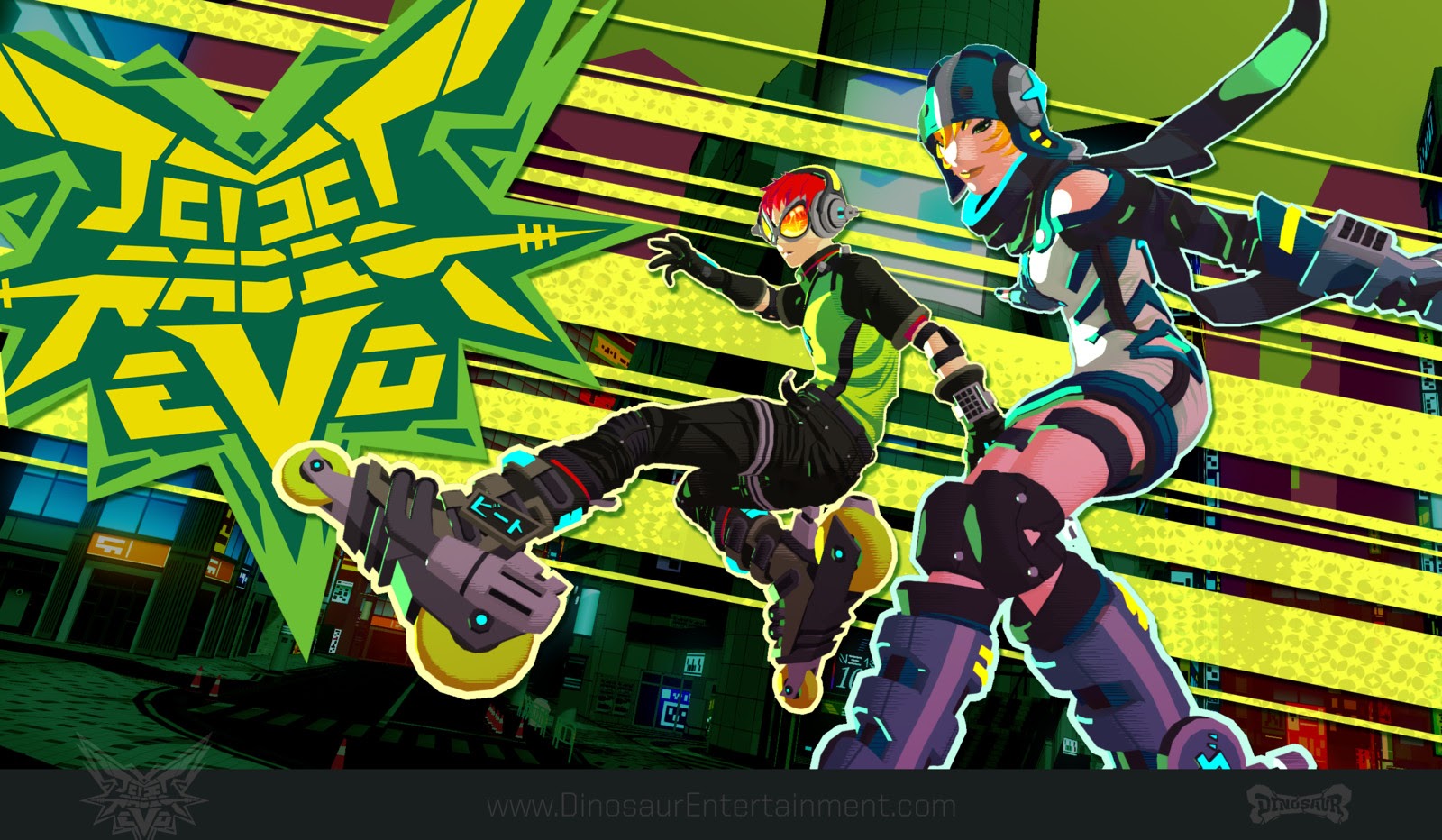 “We’re back and examining what scraps we have laying around that we can work on next,” he says. “We're slowly putting something together on the side so that for the next GDC we have something playable ready. If it seems to pique interest then perhaps we will consider crowdfunding as a way to secure initial funding for it.”