This might just be the strangest game I’ve played in years. A peculiar mix that, while frustrating in plenty of areas, managed to charm me with its sheer absurdity. Like any good archaeologist though, let’s start at the surface and work our way down (I think that’s how it works anyway; everything I know about archaeology I learned from Dr Grant* in Jurassic Park).

The original La-Mulana came out in 2005, a retro throwback platformer that seemed to crib from Indiana Jones, whip and all. It’s been a long wait for this sequel but a successful Kickstarter back in 2014 got the boulder rolling. So far, so typical. There’s been plenty of games to mix together that particular cocktail, like Pitfall and Spelunky. Don’t be fooled. For starters, read the story and La-Mulana becomes Indiana Jones if it had been devised not by Steve Spielberg but by the Hideo Kojima of the late 80s. Where most adventure games of this ilk have their treasure MacGuffins, La-Mulana had its own mad creationist myth, with a buried goddess trapped on Earth and civilisations predating humanity determined to unleash her. 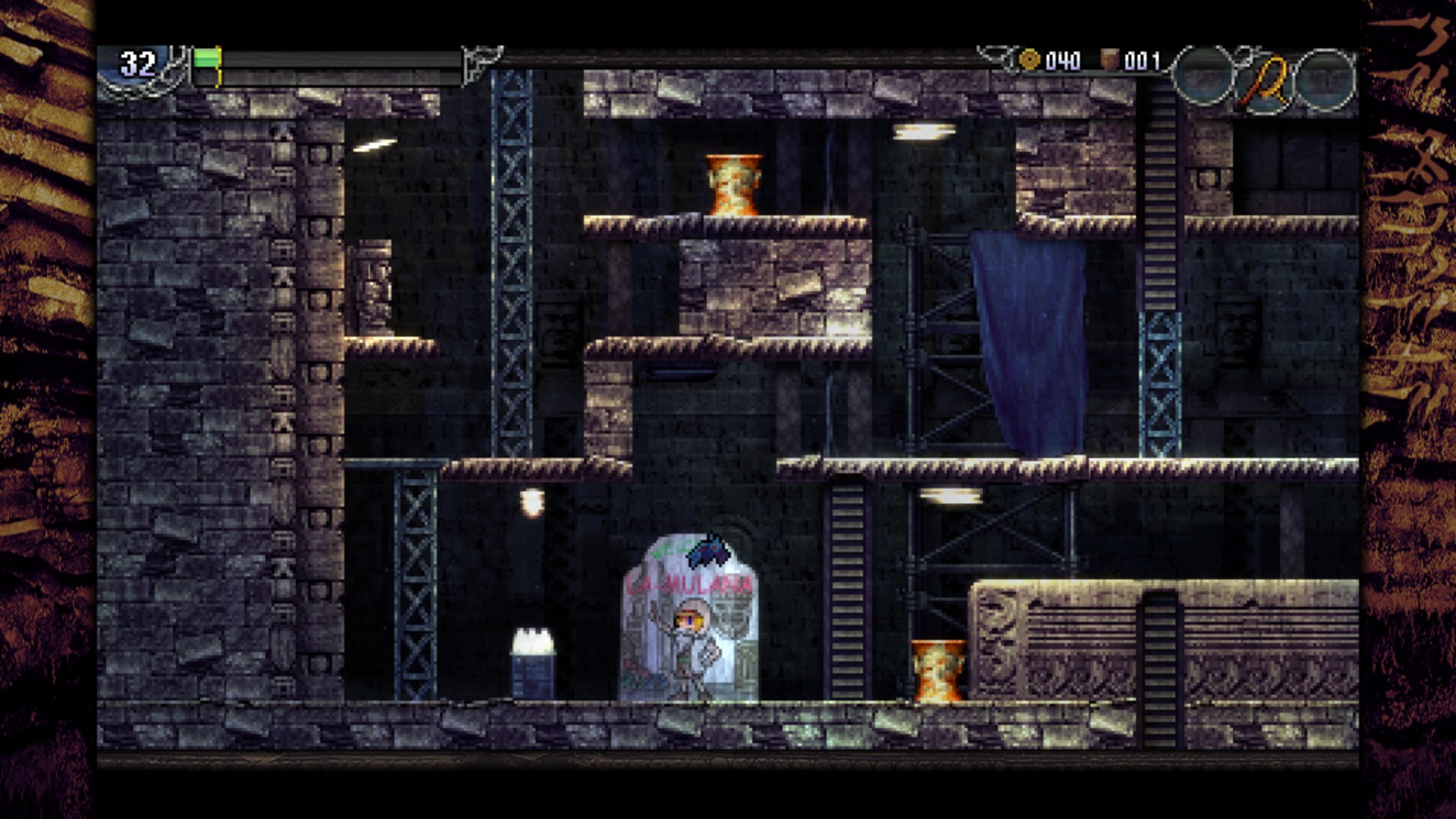 Thankfully our archetypal hero Lemeza was there to stop all that, but now he’s gone missing and the ruins of La-Mulana have become a tourist attraction. Enter La-Mulana 2‘s heroine, Lemeza’s daughter Lumisa, who’s searching for her father amidst the discovery of a whole set of new ruins adjacent to La-Mulana that are spitting out monsters. For fans of the original there’s some brief retreading of old ground that the nostalgic will surely appreciate, albeit with a strange pang of sadness in seeing those once intimidating ruins turned into a vacation resort.

Of course the game itself in its entirety is nostalgic, thoroughly inspired by games from the 80s – chiefly Castlevania. The look of the thing is so convincingly of a few decades ago that you’d be forgiven for assuming it’s some kind of remaster or port and not an entirely new game. It goes beyond looks though. La-Mulana revels in the complex world design that allowed those games to create their own sub-genre-which-shall-not-be-named. That means bosses and areas that can be tackled in any order, vague clues to guide you, and the slow process of learning every inch of the world to devise those shortcuts and secrets. Modern audiences might find the open world design more recognisable as that of Dark Souls, right down to the smattering of NPCs to help flesh out the story, though don’t expect the sombre tone of that title. La-Mulana is goofier than even the campiest Castlevania, with an array of Pokémon-esque monsters brushing shoulders with more inspired and unsettling designs (like the ceiling hanging Grudge-like creatures), till the whole thing threatens to fall apart. Yet it never quite does.

In its variety of tones it never ceases to be surprising. From the moment I emerged from sleepy ruins into an icy cavern suspended over lava with a power metal soundtrack, to the time I initiated a boss fight by slapping the face of a statue, La-Mulana 2 is packed with the unexpected. Sometimes you want a game to just spit in the face of common sense. 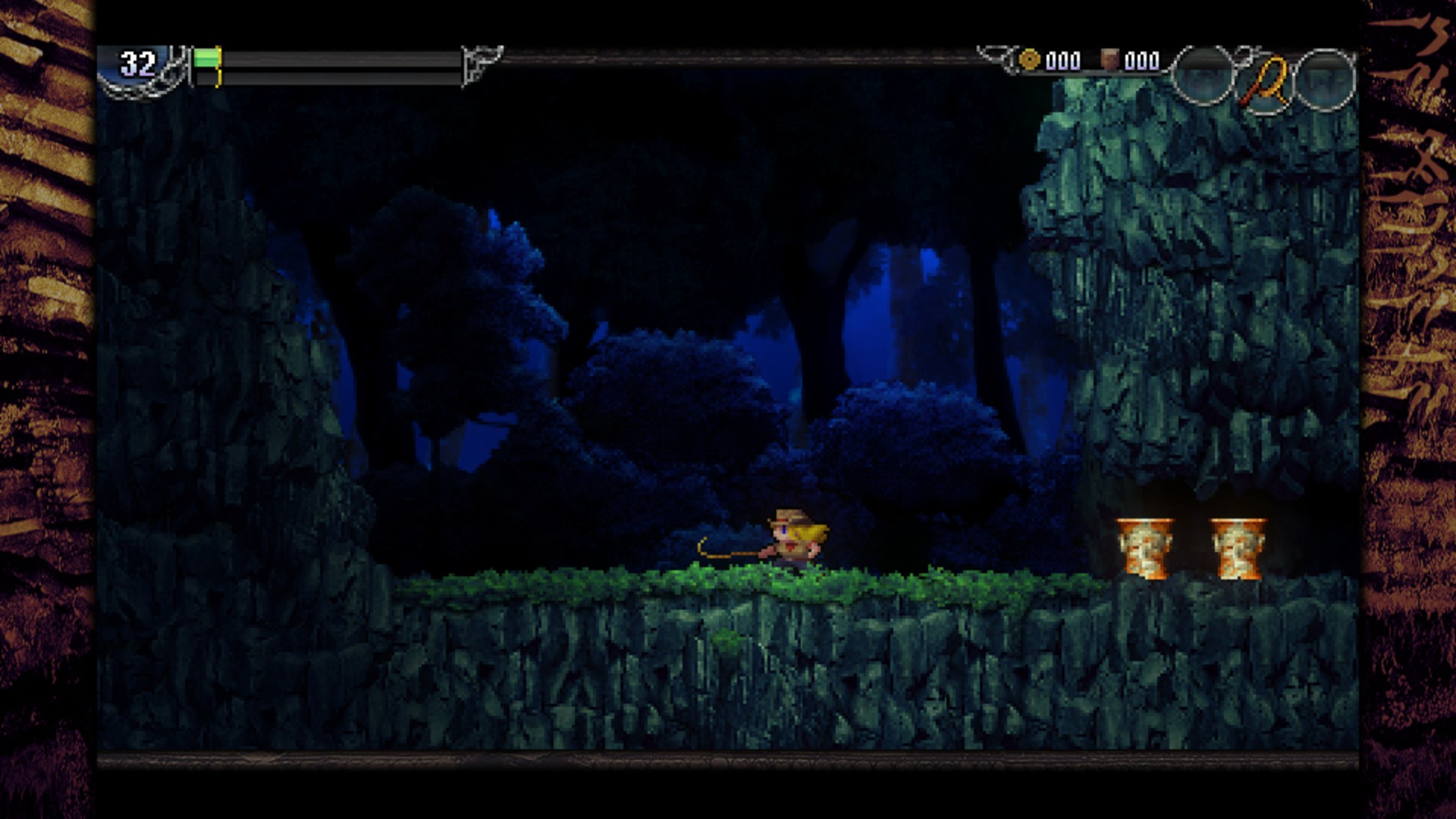 Sadly, the imagination applied to the story and world design is not found in the moment to moment mechanics. They are painfully basic and will certainly be a barrier for some, dedicated as they are to maintaining that old school flavour. Pixel perfect platforming, simple but punishing combat, a slow stream of upgrades granting access to new areas… it’s all here and exactly as expected. Which isn’t bad, really, but it lacks the engagement of more forward thinking modern peers like Spelunky, who have adopted many of the same ideas but paired them with new ideas that are just more satisfying to toy around with.

Some will enjoy the masochism of it, the unforgiving challenge of being sent back through an area again and again till you memorise the traps and jumps to make that perfect run. Believe me, too, some of those traps are devilishly well hidden. But for me, I couldn’t help but think how much more fun it would be if it was less tied to its roots. Give me a little leeway, a sense of fun that can match the daftness on display elsewhere in the game.

The boss fights in particular can be exceedingly tough, and not especially interesting either. Learning the bosses patterns is intuitive enough – lots of nice signposting and animations to clue you in – but they’ve so much health that long before you’ve defeated them the battle has descended into being a chore. La-Mulana 2 feels like it just needs to be a bit quicker, a bit more forgiving, to really unleash its potential. Instead it seems so determined to provide a challenge worthy of its inspirations that it gets in the way of its own strengths. 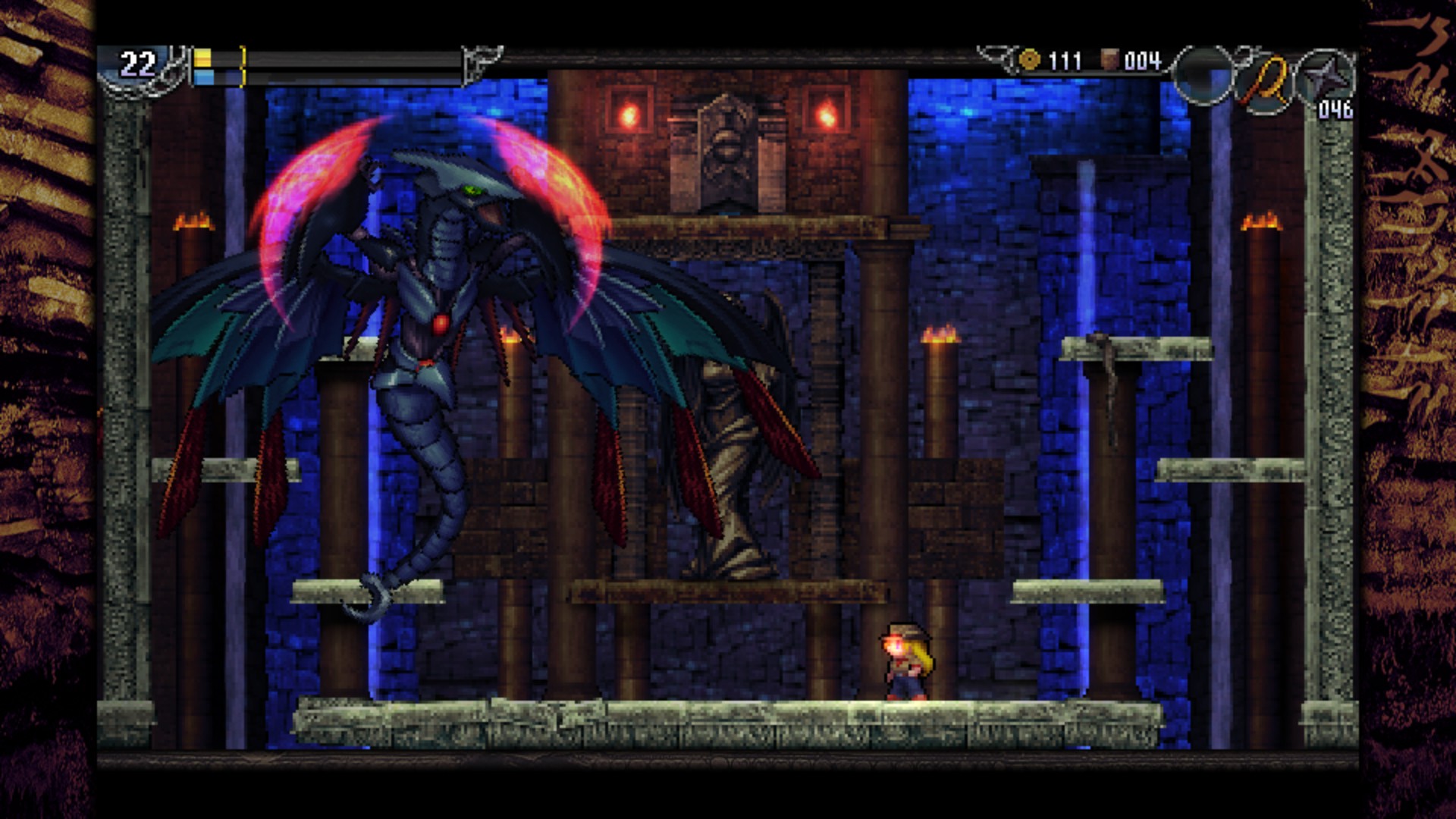 Nonetheless, the strangeness of it was enough to keep me hooked and moving forward in spite of the frustration. I wanted to see where this bizarre continuation of an already bizarre story lead. I wanted to seek out the little side quests and I enjoyed unravelling the clever world, full of obscure puzzles and interlocking paths. Much as I might hope for a smoother experience, it’s hard to be too critical of it for staying so true to its intentions, even if I think they hold it back from being a much more interesting game.

If you’re a fan of old school Castlevania-esque games then this is the ticket for you. A perfect recreation of the mould, but filled with its own strange story and theme. For those of you who aren’t this is a tough recommendation. You’ll need a lot of patience to get to the oddities I found so compelling, but if you want to know what Indiana Jones would be like if he fought mecha-dinosaurs instead of Nazis… well, you absolutely do want to know don’t you?

*Yes, I know he’s a palaeontologist.

La-Mulana 2 is out today on Windows and Mac via Steam and GOG for $24.99 (other currencies TBC)