As graphics card launches go, it’s probably fair to say the new RTX cards have had a pretty terrible one so far. With concerns over their somewhat extortionate pricing and the continued lack of all those confirmed RTX ray tracing and DLSS games to really show what their magic Turing GPUs are made of, it’s left both the RTX 2080 and RTX 2080Ti feeling like one big shoulder shrug – even if the latter is by far and away the best graphics card ever made.

It’s an awkward position to be in, to say the least, and it only gets doubly embarrassing when you get to the RTX 2070, the littlest and least powerful entry in Nvidia’s new RTX family. Sure, it’s got the same fancy ray-tracing reflection tech and deep-learning gubbins as the rest of the 20-series, but there’s still no way to actually see how it all works in a real, honest to goodness game. Instead, all I can really test at the moment is its raw performance, which early reports pegged to be roughly the same as Nvidia’s GeForce GTX 1080. Now that I’ve finally had a chance to look at one myself, I’d say it’s a little more complicated than that. Let’s take a look.

Now, while I’d normally be the first person to say it’s a waste of money spending hundreds of extra pounds / dollars on exactly the same type of card – as was hopefully plain to see in my RTX 2080Ti benchmark showdown – it is worth noting that, in said RTX 2080Ti benchmark showdown, it was Zotac’s regular AMP Edition of the RTX 2080Ti that often came out on top when I pitted it against MSI’s Duke model of the card and Nvidia’s own Founders Edition. Only by a couple of frames, all told, but it’s probably highly likely that my AMP Extreme RTX 2070 results also bear a similar kind of performance boost compared to a lot of its competition – just so we’re all on the same page before we dive into some figures.

Of course, Zotac’s AMP Extreme card still has the same 2034 CUDA cores as every other RTX 2070 card on the planet, as well as an identical 8GB of GDDR6 memory and base clock speed of 1410MHz. The main difference is in its boost clock speed, which Zotac has factory overclocked from Nvidia’s reference specification of 1620MHz all the way up to 1860MHz. For reference, even Nvidia’s own Founders Edition of the RTX 2070 only goes up to a maximum of 1710MHz. 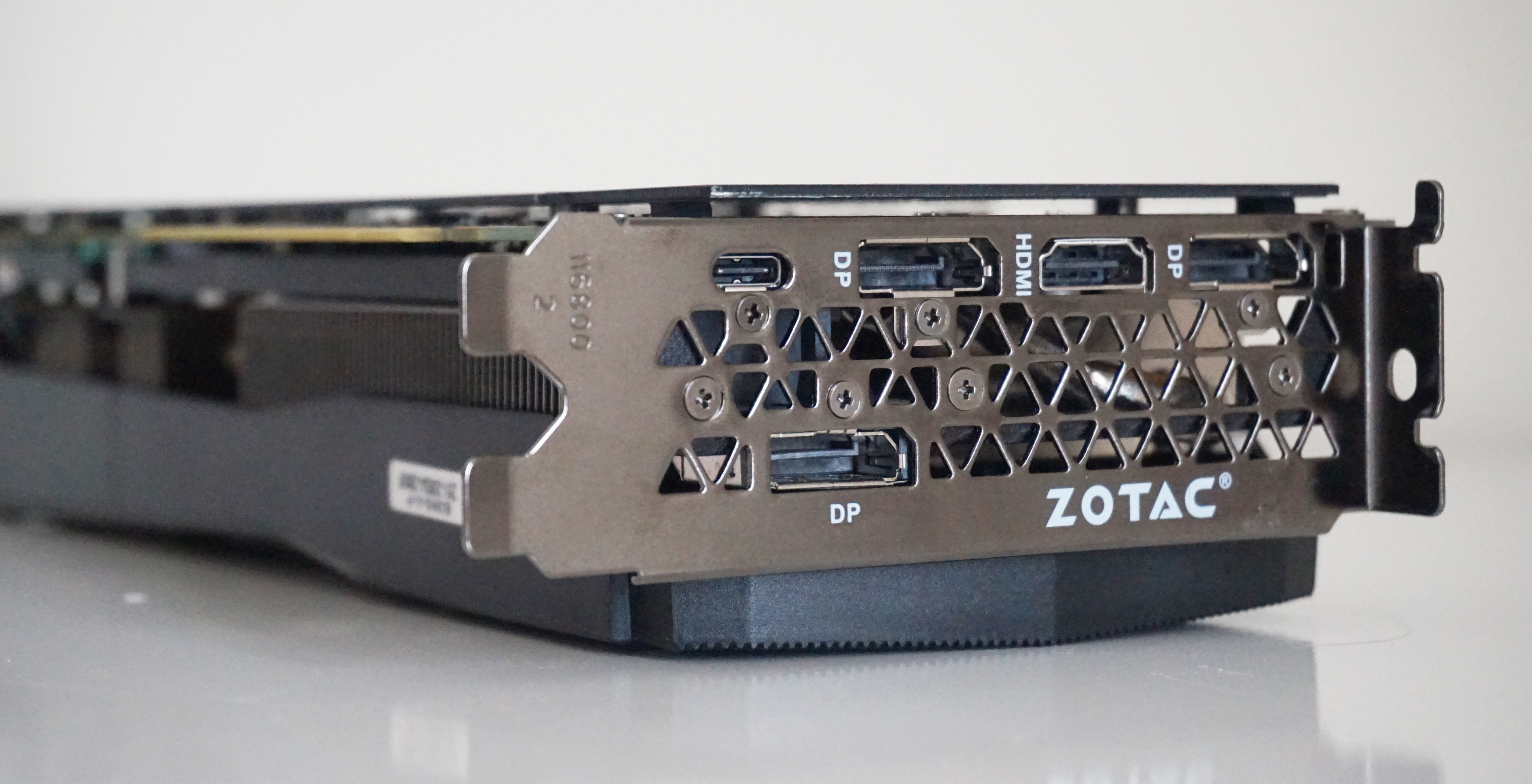 Unlike the Founders Edition of the RTX 2070, you get an extra DisplayPort 1.4 output on Zotac’s version instead of DVI.

Needless to say, Zotac’s employed some rather beefy cooling apparatus to help prevent their AMP Extreme from melting into a pile of molten goop when it reaches this kind of speed, so you’ll need a fairly decent-sized case in order to install it properly – specifically, one with 308mm of horizontal headroom. You can, at least, get away with a 550W power supply this time, though, unlike the RTX 2080 siblings which recommend 650W.

Now we’ve got the spec bits out the way, let’s talk numbers. As mentioned above, the general consensus about the relative speed of Nvidia’s new RTX family seems to be as follows: the RTX 2070 is roughly the same as the GTX 1080, the RTX 2080 is on par with the GTX 1080Ti, and the RTX 2080Ti is way out in front of everything else.

From my own findings, Zotac’s AMP Extreme edition was often somewhere in between the GTX 1080 and its Ti sibling when I paired them with my Intel Core i5-8600K and 16GB of RAM, resulting in a card that’s both 4K capable and absolutely flawless at 2560×1440 and below. What’s more, there didn’t seem to be much evidence of my processor becoming a bottleneck at lower resolutions, either, making the RTX 2070 much better suited to your average mid-range gaming PC than its 2080 siblings.

In Hitman, for example, the RTX 2070 produced a lovely smooth average of 66fps on Ultra at 4K, putting it three frames ahead of my historic GTX 1080 results (taken once again from Zotac’s regular AMP edition of the card) and nine frames behind my GTX 1080Ti data (recorded on Zotac’s Mini version of the card).

The same thing happened in Final Fantasy XV, too, where the RTX 2070 managed between 35-39fps on Highest at 4K with all of Nvidia’s fancy tech effects switched off – a feat that was eminently more playable than the 30-33fps I experienced on the GTX 1080, but not quite as slick as the GTX 1080Ti’s range of 45-47fps.

Sometimes, though, that tiny boost can make all the difference when it comes to picking your overall graphics setting. In Total War: Warhammer II, for instance, the GTX 1080 topped out at an average of 49fps on Medium at 4K with lows of 44fps when the camera zoomed in right up close, while the RTX 2070 was able to hit an average of 53fps with dips down to just 48fps. That’s still not a patch on the GTX 1080Ti’s average of 61fps and lows of 56fps on the same setting, but it suggests the RTX 2070 might just be slightly better equipped than the GTX 1080 to deal with that slightly awkward middle zone between 30fps and 60fps, raising the stakes from ‘just about playable’ to something a bit more comfortable.

Indeed, that certainly seemed to be the case when I subjected them both to Monster Hunter: World, as the RTX 2070 was often able to achieve similar frame rates at 4K as its GTX rival on the next setting up. On High, for instance, the GTX 1080 managed between 35-40fps out in the field, whereas the RTX 2070 stomped ahead with 37-46fps – something the GTX 1080 was only capable of when I knocked the settings down to Medium.

In fact, the only game in my testing suite where the GTX 1080 managed to pip the RTX 2070 to the post was Forza Horizon 4, where it finished with an average of 67fps on Ultra at 4K ahead of the RTX’s average of 62fps. Both, however, still only hit a high of 70fps.

Elsewhere, it was pretty much neck-and-neck. In Rise of the Tomb Raider, for instance (I haven’t managed to get the GTX back in to put it through Rise’s shadowy sequel yet), they both scored an identical average 51fps in the game’s built-in benchmark on Very High at 4K with SMAA anti-aliasing enabled, and each of them hovered around the 70-100fps region in Doom on 4K Ultra settings as well. 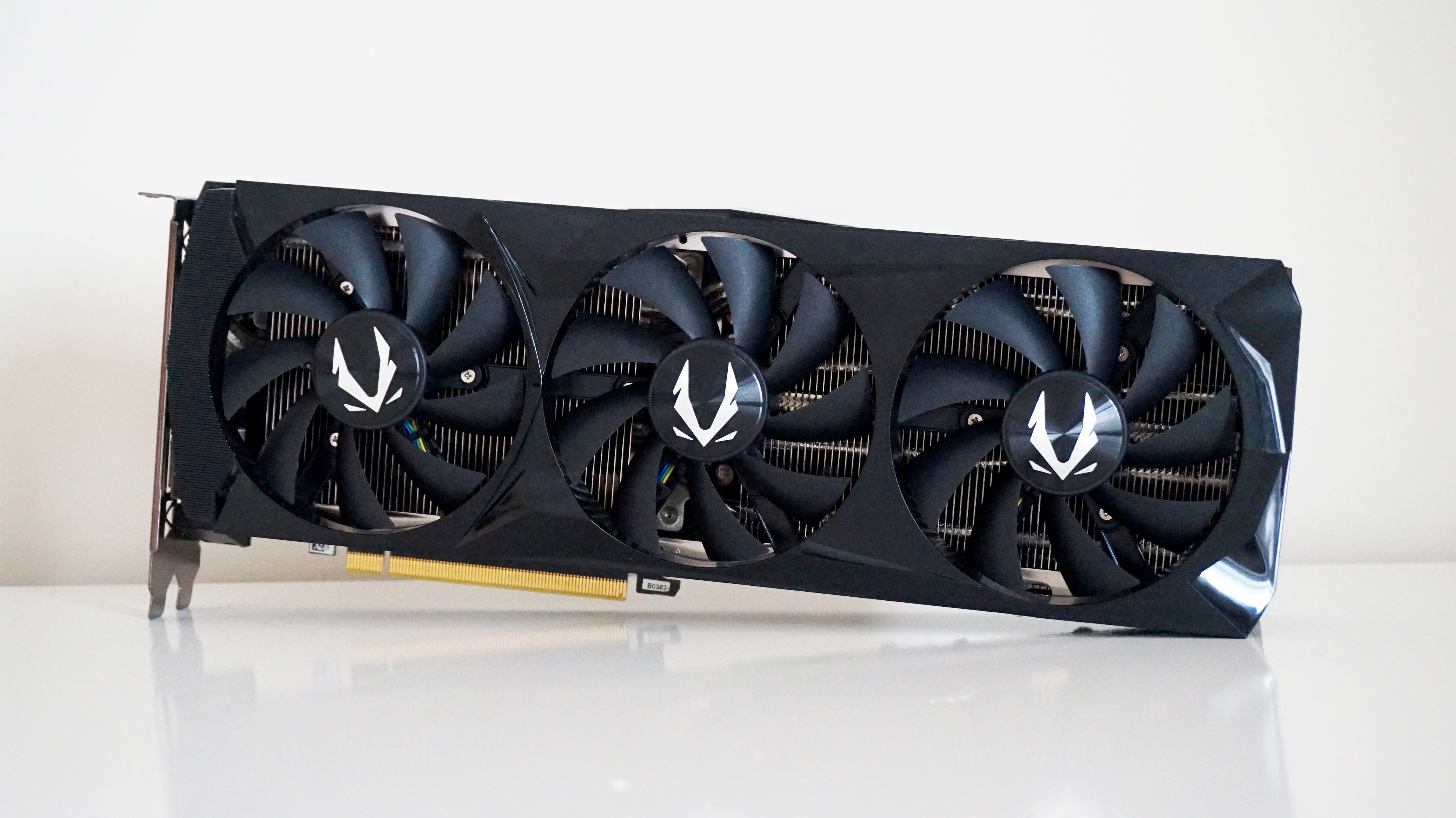 It’s a big’un all right…

As for gaming at 1440p, you’re pretty much looking at a flawless 60fps or more on max settings across the board. Once again, the RTX 2070 proved itself to be the superior card in Monster Hunter: World, pushing the frame rate well up into the high 60s instead of settling for mid-50s like the GTX 1080 at this resolution, but otherwise the difference was pretty negligible.

So yes, the RTX 2070 (or at least Zotac’s AMP Extreme interpretation of it) is, right now, by and large, a better graphics card than the GTX 1080. At 4K, its small improvements put in a surprising amount of legwork compared to its GTX rival, shifting the playability scales just that little bit further into ‘ah, this is actually all right’ territory rather than ‘hmmm, this is starting to get just a teensy bit shonky’ territory – something which will only get even better on games that support Turing’s fancy and rather nifty DLSS feature, too.

This may not be the case on every RTX 2070 card in existence, of course, as cheaper cards won’t have the benefit of Zotac’s stupidly high max clock speed, but I’ll do my best to get in a couple of other RTX 2070s as soon as I can to double check my figures.

The only real problem, just like all the other RTX cards, is the damn price. Zotac’s AMP Extreme edition is obviously at the upper end of the RTX 2070 scale right now, but there are still several RTX 2070s knocking around in the £530-590 / $520-600 region, if not slightly higher. Your typical GTX 1080, on the other hand, can normally be had for under £500 / $500, which is arguably a much better deal right now if you’re simply looking for a decent card that can do 4K. After all, it’s not like the GTX 1080 can’t do 60fps on Medium to High settings in most games at this resolution, so as long as you’re willing to make that kind of compromise then the GTX will almost certainly be a better use of your money.

What’s more, if you’re simply looking for a card that can do 60fps+ at 2560×1440, Nvidia’s GeForce GTX 1070Ti will give you exactly the same results for an even smaller outlay of around £380 / $400. Plus, you get a free copy of Monster Hunter: World thrown in for your trouble as well right now (which doesn’t apply to the GTX 1080), making it even better value.

As always, this has to be caveated with the fact that all of Nvidia’s fancy Turing tech may well make the RTX 2070’s extra price bump worth it in the end, but until I can actually test all that stuff, it’s hard to say whether shelling out for it in advance is a good idea or not. As it currently stands, there’s a small case to be made for the RTX 2070 if you want the best 4K capable card without stumping up the cash for the even more expensive GTX 1080Ti or RTX 2080 (and who knows, maybe there’ll even be some decent Black Friday and Cyber Monday deals on it next week), but when it comes to overall value for money, the GTX 1080 remains a tough act to beat.