If you click on a link and make a purchase we may receive a small commission. Read our editorial policy.
A Panel Shaped Screen is a monthly column where Giada Zavarise explores how comics and video games inspire each other. This week she wants you to try Berserk, a manga inspiration for Dark Souls

You might have heard of Berserk already. A few people have pointed out the similarities between Hidetaka Miyazaki’s Souls series and the manga Berserk. Perhaps you’ve even gotten curious, toyed with the idea of getting into it, but without a clear idea of where to start. Or perhaps you got the impression that Berserk is not for you.

You may have heard Berserk is filled with violence, sexual assault, gore, grim characters and questionable content. And for the most part, you would be right. But at its core, Berserk is about love.

First published in 1989, Berserk tells the story of Guts, a big dude with a big sword who wanders a medieval world filled with horrors. During the day he fights against Apostles, humans who have sacrificed their loved ones to become powerful demons; at night he becomes the prey, hunted by malignant spirits. 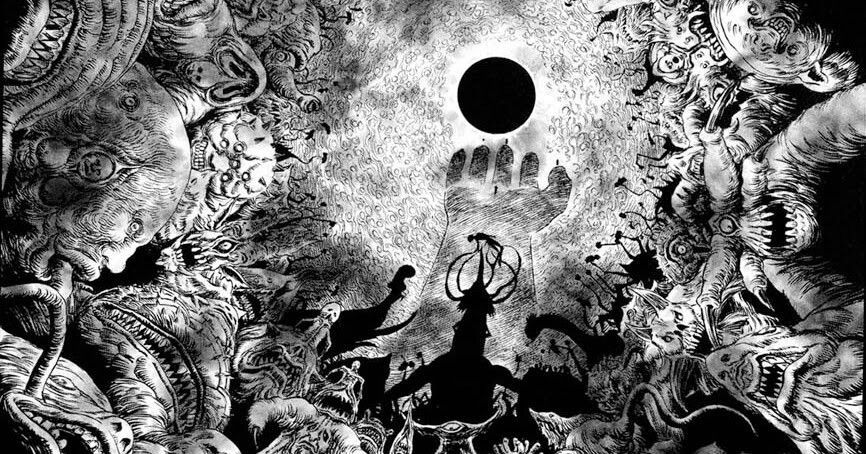 Guts’s main trait is anger. But despite the manga’s name, his isn’t the blind fury of a berserker; his rage is laser-focused on Griffith, his former friend and betrayer, who first appears as a sleek, bird-faced demon straight outta a Hellraiser movie. To understand what the hell happened between the two, the manga takes a 20-volumes long detour into the past to tell the story of the world’s most catastrophic break-up.

Griffith’s goal is to get his own kingdom. To accomplish it, he guides his gang from battlefields to royal palaces, chasing an impossible dream while walking on a mountain of corpses. It’s a dazzling journey from rags to riches, from skirmishes to courtly intrigue, depicted by Kentaro Miura with an astonishing attention to detail. His panels are like medieval illustrations, meticulously filled with countless knights in shining armour, rows of horses, and giant war machines.

But the Golden Age is also the story of a relationship, and the way it dies. It’s about Griffith’s desire for a friend to call his equal, Casca’s unrequited love for him, and Guts’ inability to realize how much Griffith actually cares. It’s the world’s messiest love triangle, and it works so well because there are enough unsaid words and ambiguous acts to let every reader have their personal interpretation of the events.

Is Griffith a psychopath, or simply incapable of expressing his feelings? Was Guts attracted by him, or were they just very good friends? Did the characters have any free will on the matter, or had the tragedy been sealed by Fate? 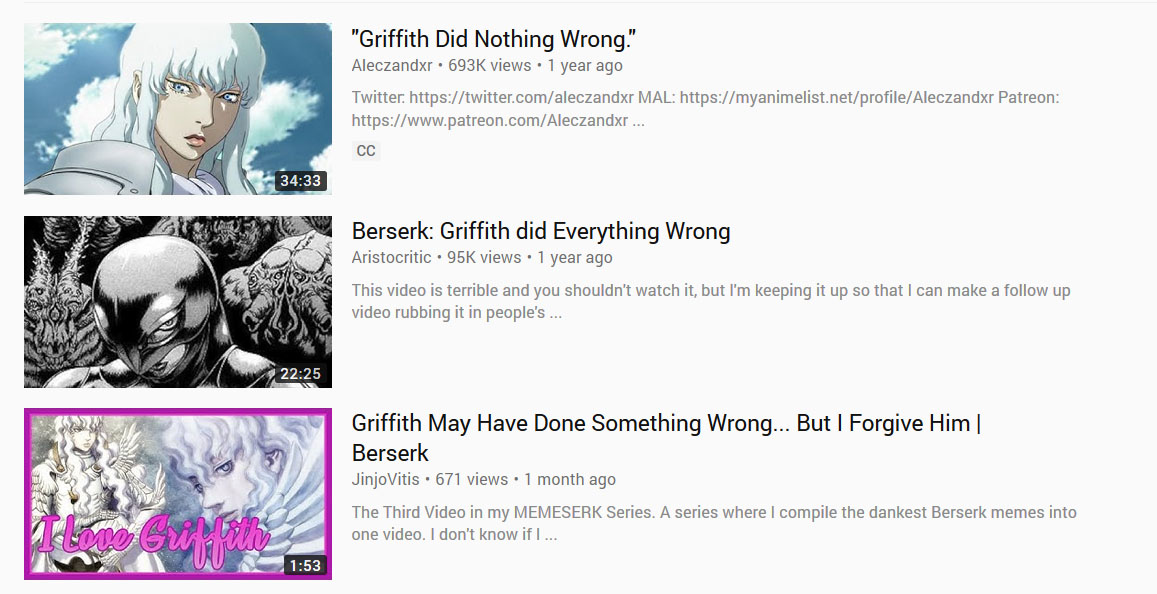 The endless character dissection is what kept the Berserk fandom going for 20 years, despite the manga’s intermittent publishing schedule. And by “intermittent”, I mean that one time the party jumped on a boat, and it took them seven years of publication to reach the other shore.

The manga rarely reaches the same emotional heights of the Golden Age arc again, but one thing the Berserk consistently gets right, I think, is sense of wonder. Miura’s illustrations often draw from classical European artists like Hieronymus Bosch and Gustave Doré. He depicts creatures in Berserk like presences that break through from the realm of myths to infest reality. Monsters are not just enemies to slay, but alterations in the fabric of reality itself.

Most characters struggle with the idea of the monsters themselves existing — let alone fighting them. This is a boring medieval world that’s getting slowly filled with magic, and the whole society is reacting at a visceral level. But this is also a world of fairies, cute witches and wonders. And as the chapters pass and the lonely Guts gets a whole new party of friends, Berserk doesn’t even feel so edgy anymore. 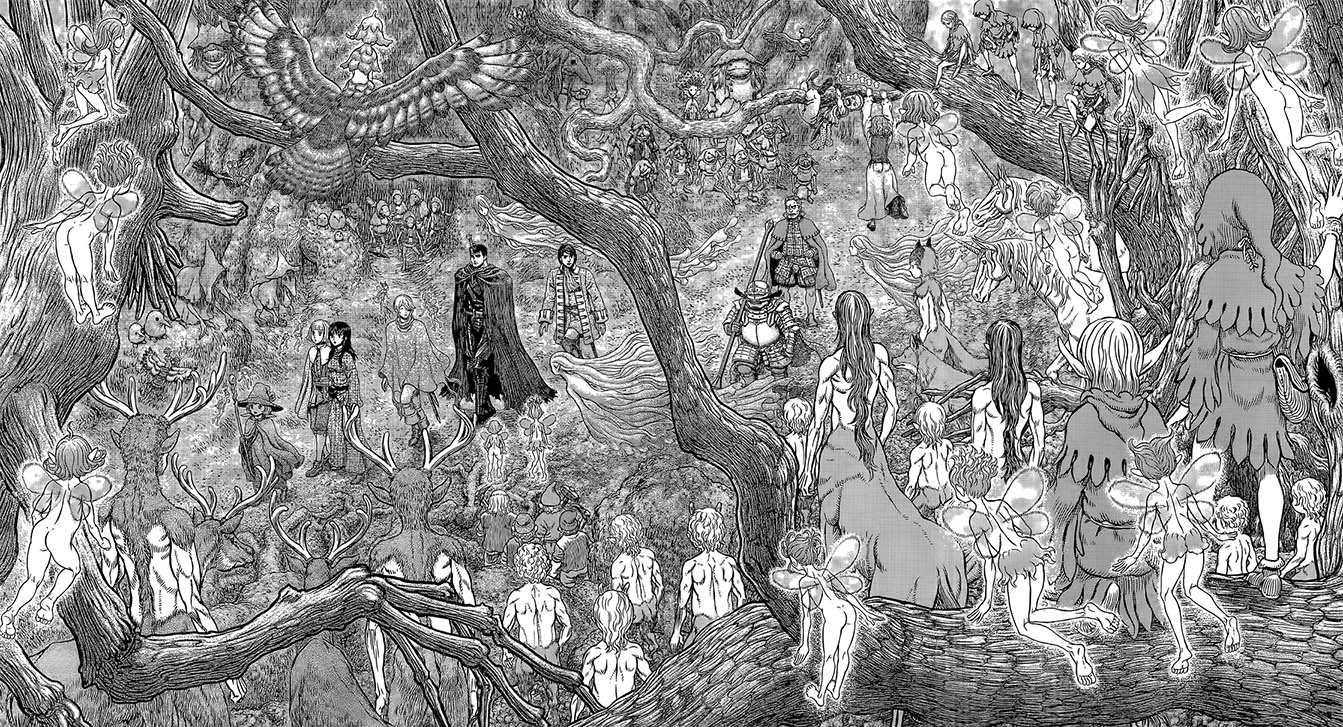 This equilibrium between unfathomable threats and human stories is what makes Berserk truly special. The Souls games are definitely visually influenced by Berserk, and you get the same off balance feeling when confronting beasts that shouldn’t be real in the game -- coupled with that gradual sense of safety as you get to know the world and find a few allies. But the human stories in Souls are hard to find. The biggest difference is in the combat. The difficulty of the Souls games is prized by fans, but it doesn’t really feel like Berserk: in Dark Souls, every single enemy can potentially kill you, while Berserk is all about killing dozens of enemies at once by swinging a big sword.

There are official video game adaptations of Berserk. The first two, developed by Yuke’s Media Creations for Dreamcast and PS2, tried to depict the formula through a mix of hack-and-slash action and quicktime events. In 2017, PC and console users alike got the bafflingly titled Berserk and the Band of the Hawk, a Dynasty Warrior-esque game featuring the Berserk cast. It’s nothing revolutionary, but slashing countless monsters while playing as your favourite character is as dumb as it is satisfying. 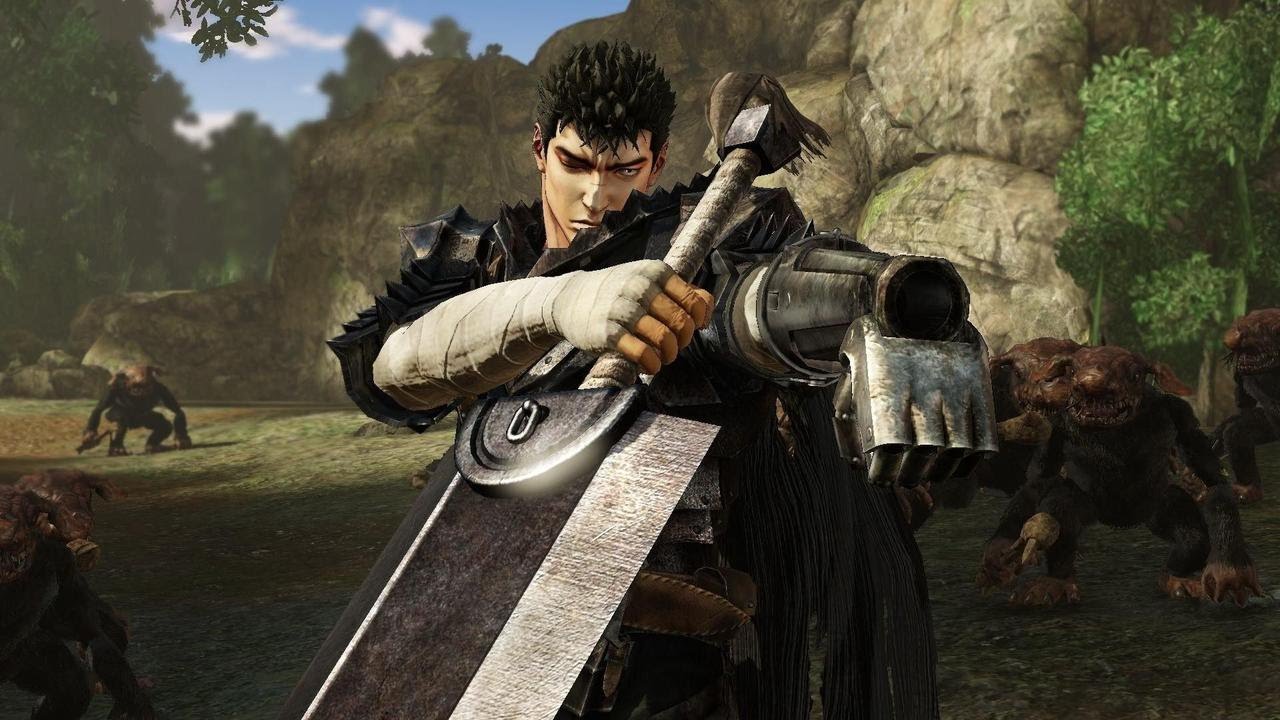 If you want a good Berserk anime, watch Netflix’s Castlevania adaptation instead of the official ones: it’s the best Berserk adaptation we ever got. It's all there, in spirit: the corrupted church, the sense of despair as monsters disrupt normality, the trio of heroes and their ambiguous love-hate relationship (I ship them as a poly trio and you can't stop me). The director talked about his love for Berserk in interviews, and he’s practically begging people to let him direct an adaptation at this point. While you’re on Netflix, also check out the excellent [and very NSFW] Devilman Crybaby, since the original Devilman manga was a huge inspiration for Berserk. Close the circle.

Berserk is easy to love, because there’s something for everyone. It’s also an easy series to get into if you’re not used to Japanese media: the fantasy setting will feel familiar to Western readers, and there are no weird spin-offs you have to read to fully understand the story. Just start from volume 1 of the manga, read to your heart’s content, and don’t let the Internet spoil it for you.

Berserk has been going on for a long time, and its subtle influence can be felt in a lot of games, from Final Fantasy Tactics to Tales of Berseria. Many mangas like Claymore tried to imitate its appeal, and yet no comic got the title of “true Berserk successor”. There’s nothing quite like it, and that’s why I keep recommending it, even though it’s unpleasant at times and will probably never end. Because true love means accepting your partner despite its flaws.