As the nights draw ever closer, and the windows of the local Tesco grow ever more pumpkiny, I have been burrowing into blankets, putting a hot water bottle on my feetsies (because we don't want to turn on the heating yet) and wallowing in some classic scares. But I have found this harder to do with games. Most games are, obviously, a very interactive experience, and when the scares are happening to you, rather than someone you are watching, it is less conducive to comfortable toasty-toe Octobering.

At the same time, I have been pootling around in The Sims 4, restlessly starting and canning new builds in a fit of pique. But then I realised that my two interests can be combined: I can indulge in some classic horror, play a game at the same time, and I don't even have to do any work because other Sims builders have already done it! That's my favourite kind of work! And lo and behold, there are loads of recreations of famous scary buildings knocking about on The Sims 4 Gallery. I've linked a few of my favourites that I found below. Sure, you could search the gallery for them yourselves, but the gallery UI is the worst thing in the entire world, so this will save you time. 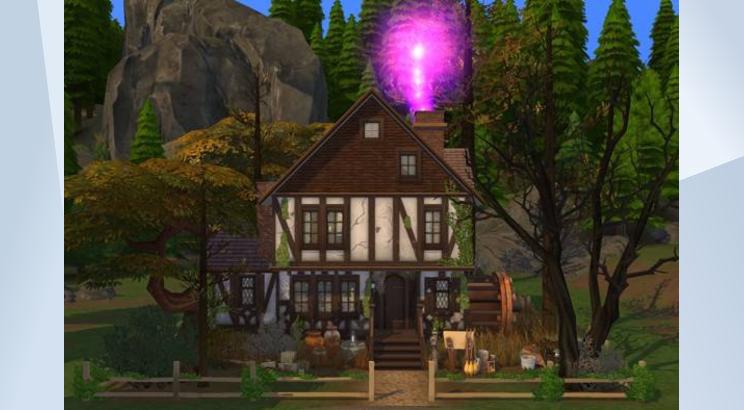 History will never be able to justify to me why Hocus Pocus wasn't instantly a classic as soon as it came out. It has a scene where Bette Midler performs a sort of talk-singing version of I Put A Spell On You at a Halloween party. I do not understand why it was met with 'mixed reviews'. What's wrong with people?

Anyway, relive the story of three witches being resurrected by a child lighting a candle with this spooky yet bijou cottage that would almost certainly cost upwards of half a mil' today. Look at all those original features! It's a historical property! Bonus points to builder "avizzzz" for the movie-accurate placement of tiny windows, and the magic spurting out of the roof. 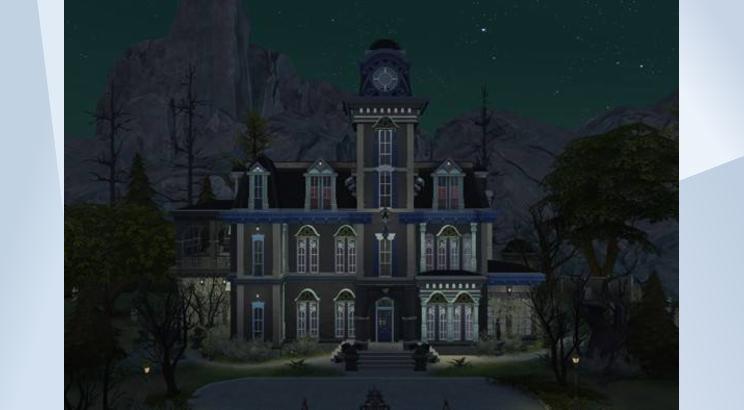 At this point we all know that the whole point of the Addamses is that they're only creepy and kooky by the suffocating standards of suburban normies. As has often been remarked, the family is loving, supportive and healthy. Who among us has not wished our relationship could be as strong as that of Morticia and Gomez? At least our fake relationships can be, with this impressive rendition of the massive mansion from the 90s movies by "Simproved". I will also never own a five bedroom house. I know this, and have made peace with it. So the Addams family are aspirational on many levels.

The Bates Motel from Psycho 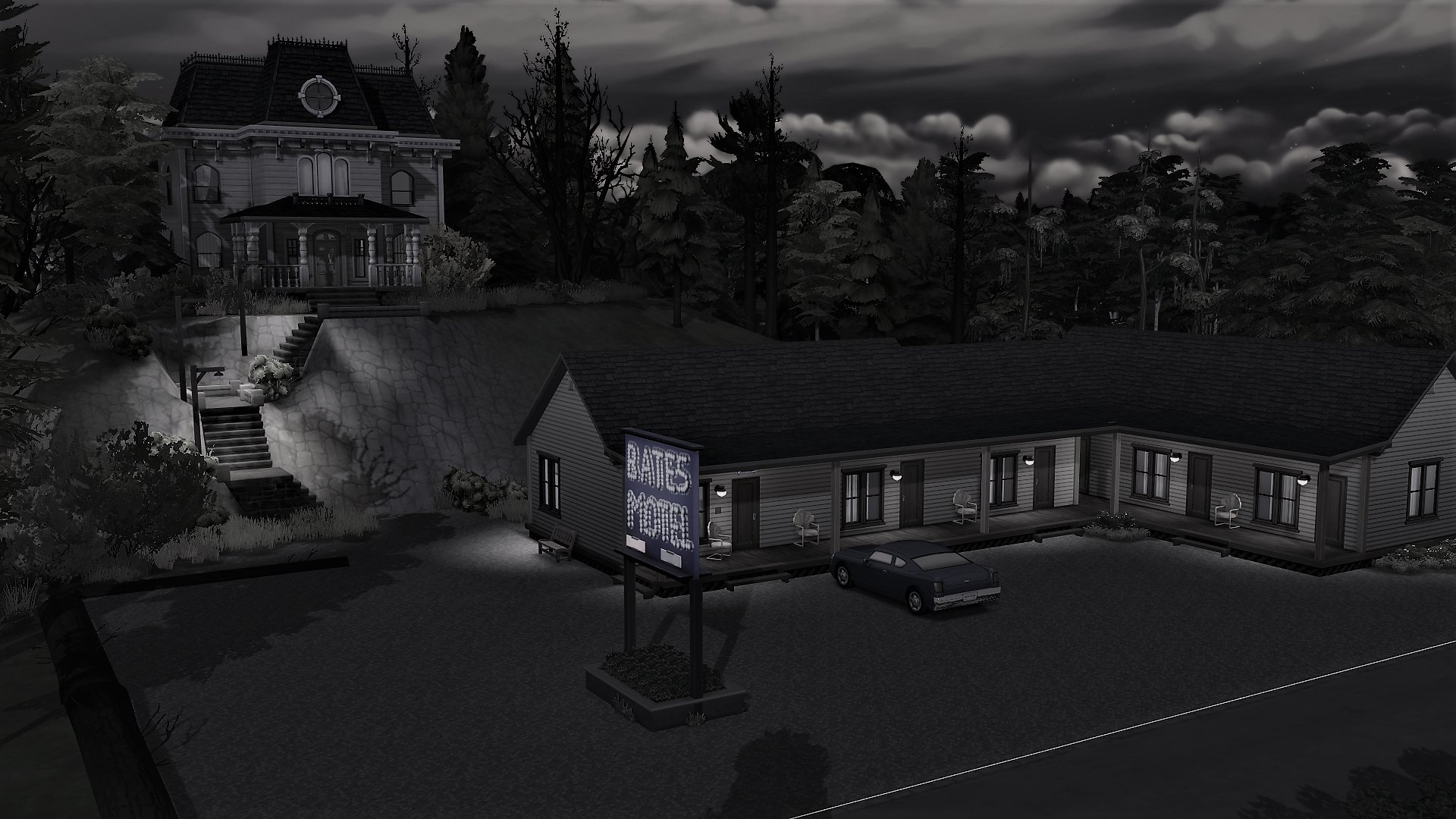 An absolute classic, innit? Inspired by the original 1960 Hitchcock Psycho, and not the new TV show (or the baffling 1998 shot-for-shot remake starring Vince Vaughn for some reason), "65brenda"'s build of Normal Norman's family business comes with the Bates' big gothic home for your Sims to live in. I am particularly taken by the way they've painstakingly placed individual wall lights to spell out BATES MOTEL on the sign there. There is also, obviously, a shower. 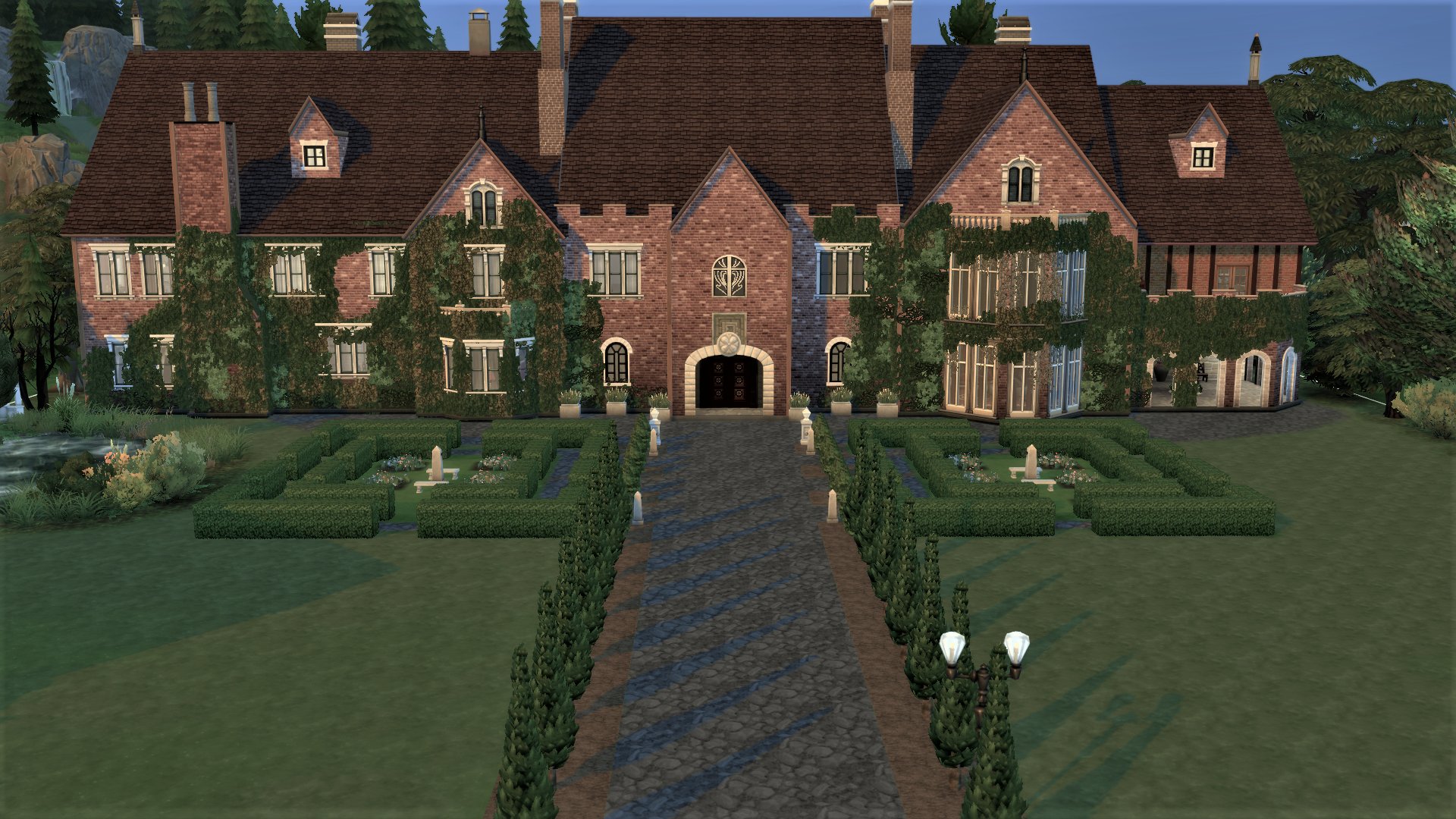 Some more modern classics, perhaps. I know that Bly Manor is a bit rubbish as a TV show, but the house itself is a great crumbling spooky mansion archetype. I'd defo still live in it, even if it was well haunted. The above rendition is also by 65brenda, and while it has less detail on the back of the house, the landscaping and the accuracy elsewhere is really very good.

There's also a smashing version of Hill House by "Riemunen". This one really nails the asymmetrical weighting of the front of the house, with the weird castle-esque tower bit offset to one side.

Halloweentown from The Nightmare Before Christmas 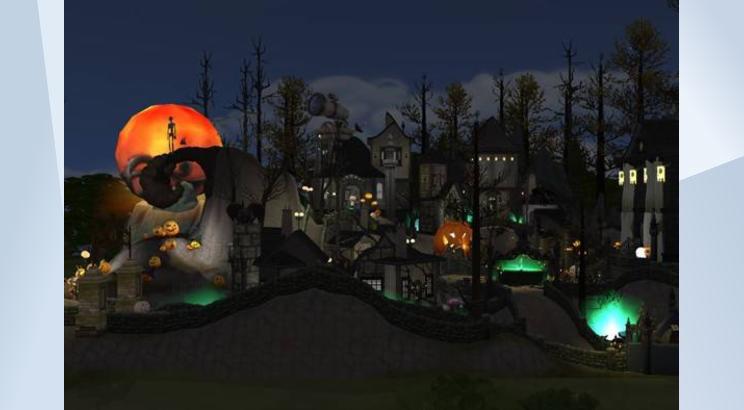 There are loads of other versions of Halloweentown on the gallery and they're all made by cowards because they've all built it like a proper town. You know, a place where people could actually live and probably go to a farmer's market. Not so with "npetock"'s version, who clearly understands the important role that the aesthetic plays in The Nightmare Before Christmas. I mean, really, isn't that basically the entire impact it had? This version of Halloweentown has some houses and stuff too, but importantly it recreates the iconic sad boy in a graveyard shot by using object cheats to make a crystal ball fucking massive, and hoofing it in one corner of the build. This means that the build, viewed from any other angle, is ridiculous. And npetock knows this. Good show.

Pro tip: you can find a bunch of other Jack and Sally stuff on the Sims Gallery under 'The Nightmare Before Christma' because that is where you hit the character limit.

The Maitland's house from Beetlejuice 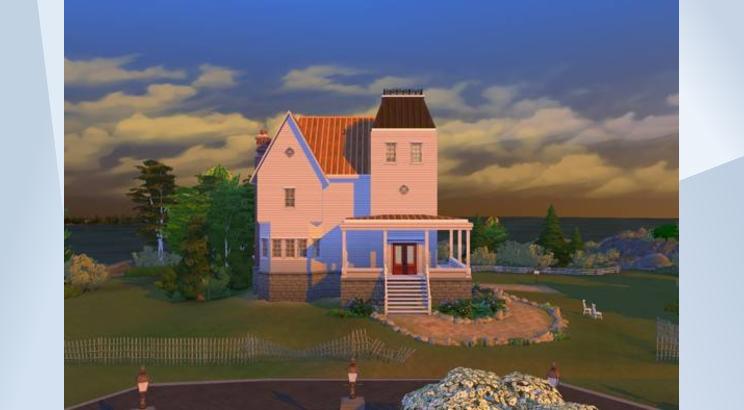 I love this. I have nothing more to say. "Milgemilge" has done a really exemplary job, inside and out. There's even a stop motion build video if you want to see all the details - even the room with the miniature is included. 10/10 job, would love my Sims to live in a weird house with terrible layout like this one. 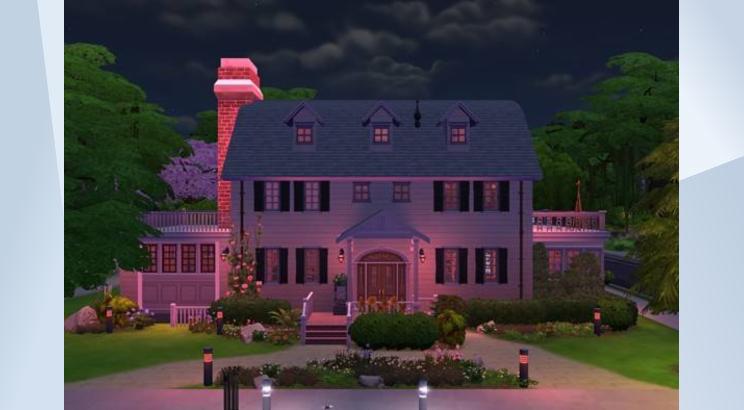 Ah yes, that rare confluence of real life with almost total bullshit. In the 70s, a man murdered his entire family, and a year later another family bought it but moved out after a month, citing terrible haunting. Their experience was then written up as a book, which spawned the bajillion movies. The author of the book later said that he and the couple came up with the story over several bottles of wine, and a judge once said of it: "It appears to me that to a large extent the book is a work of fiction." Either way, it is a pretty creepy looking house. The windows on either side famously make it seem like the house is looking at you with big weird window eyes. There are many Amityville Horror houses on the Sims Gallery, but I like the one by "TheDismalSimmer" the best because it includes the spooky basement that is made a big deal in several of the movies. Also, they have incorporated some great dramatic lighting. 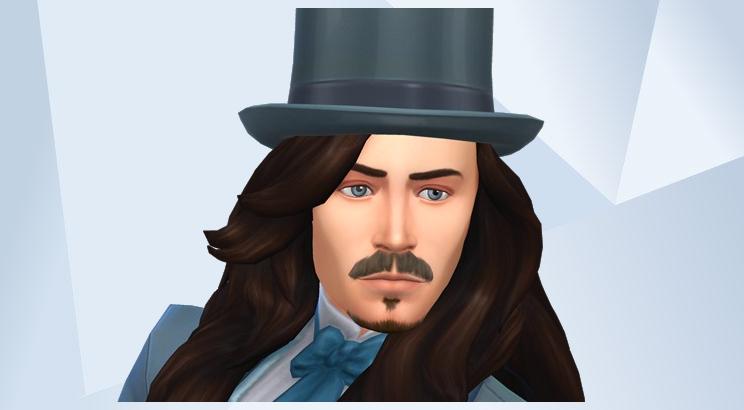 The only Dracula more ridiculous than Stephen Moffatt's Dracula is the one from Francis Ford Coppola's Bram Stoker's Dracula. This includes both the elderly version of Gary Oldman Dracula, who looks like someone put a large poodle in a dehydrator, and the young sexy Gary Oldman Dracula from later in the film, who looks like that one fucking guy you see at every wedding. I love this because in the screenshots he is both literally and figuratively vamping. Thank you, "SirSimALot".

All screenshots are from the named builders on The Sims 4 Gallery, apart from The Bates Motel and Bly Manor, which are from 65Brenda's Twitter.