"Steampunk" used to mean something quite specific. But the term has been more and more broadly applied over the years, to the point where it's now commonly accepted as a shorthand for "sci-fi stuff done with old technology". A broad premise, you'd think. It should be. But in practice, it almost always boils down to brass and top hats and twee Victoriana, with all the grim colonial baggage of the era swept under the steam-carpet, using a broom with cogs on it. The whole subgenre is stuffed with British - or at least European - cultural cues.

Sometimes, it really works. See the sexy-ugly, heraldry-daubed WWI mechs of Iron Harvest, for example (this is technically Dieselpunk but... c'mon), or the hellish, in-steam-we-trust desperation of Frostpunk. Grand stuff. But for every masterstroke there's a dozen lazy also-rans, where goggles, corsetry and pith helmets have been applied with abandon, like a sauce that somehow makes a meal taste more bland. In this desert of waxed moustaches, then, coming across a game like Airborne Kingdom, in which the whole concept has been approached with fresh eyes, feels like stumbling upon an oasis.

In this city builder, which tasks you with the ongoing construction and navigation of a big flying city in a fantasy world, the aesthetic palette is unmistakable. From the arches and minarets of your sprawling waftopolis, to the scales the soundtrack breezes through, to the dream-like, abstract patterns which cover the opening region in place of an ocean, it's the golden age of medieval Islam writ large. And like all good works of whatever-you-want-to-call-steampunk, it's not just set dressing. Just as Iron Harvest used all of its clanking chuggery as a way to explore the psychic disaster of archaic monarchies discovering mechanisation, so Airborne Kingdom uses its floaty-town premise to explore the role of Islamic cultures in what we think of as the Renaissance.

Trust me, as pseudointellectual as that sounds, this isn't a reach. One of the main reasons art, science and all the rest came back to Western Europe after everyone had spent the best part of a millennium beasting each other following Rome's collapse, was through the continuity of culture in the Muslim world. Throughout the so-called Dark Ages, where everything north of the med could best have been summarised as "Mad Max, but the cars are horses", Arab scholars were translating, retranslating, and building on the work of classical writers, and distributing that knowledge through a vast trade network. Yes, this is a gross oversimplification, but this is a post about a video game, so, y'know, I can't write a massive history essay. 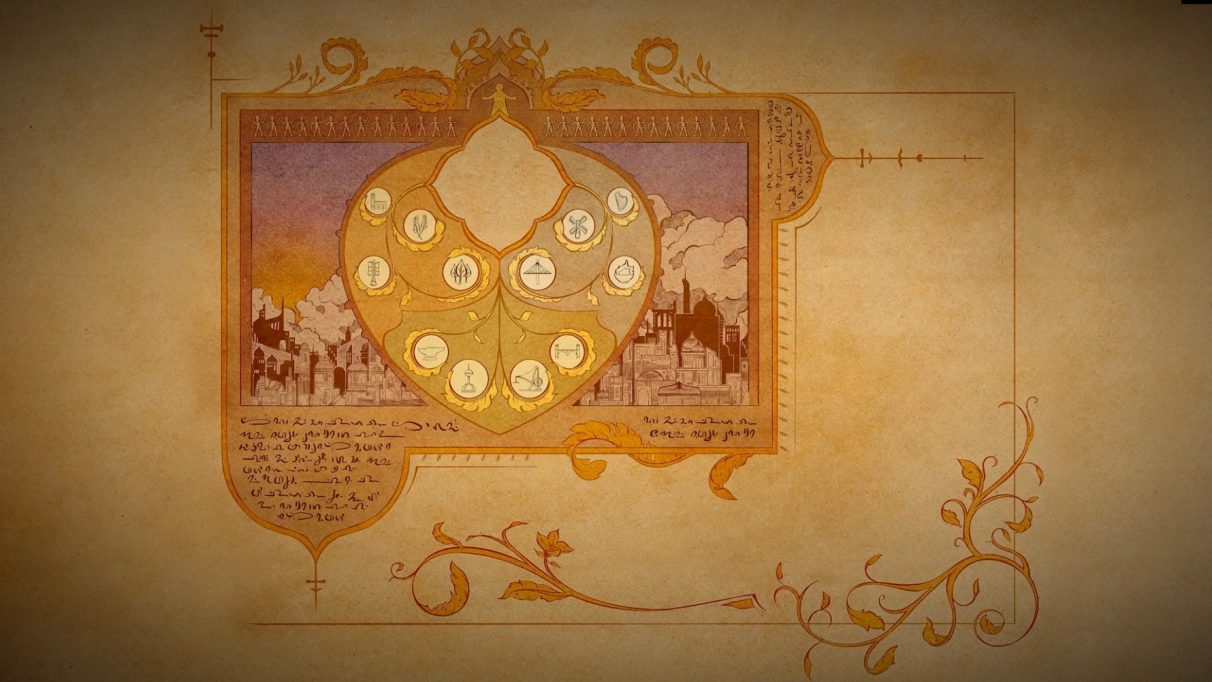 Anyway, that's exactly what you're doing in Airborne Kingdom. The world is bollocksed, see. But your culture happens to have found a manuscript telling them how to recreate the Airborne Kingdom - a semi-legendary construction which used to pootle about between different nations, keeping them all connected, and acting as a sort of mobile hub of learning and commerce and such. So while the game is about building your city, it's also about helping piece civilisation back together from its scattered, isolated, broken components.

Needless to say, both stories of development are intertwined. A voyage to a distant clay bed to harvest adobe for building new housing blocks might have you happen upon a knackered old turbine, for example. This, you realise, is exactly what those poor bastards you traded with a few weeks back were after, so you drift back to take it to them, and have a dozen new citizens join you in reward. It's very cleverly balanced, too. You never feel like a dogsbody for the earthbound, and it's quite possible to build your city self-sufficiently for long periods. But at the same time, the benefits of bringing more cities under your aegis are too pronounced for you to want to ignore them for long. 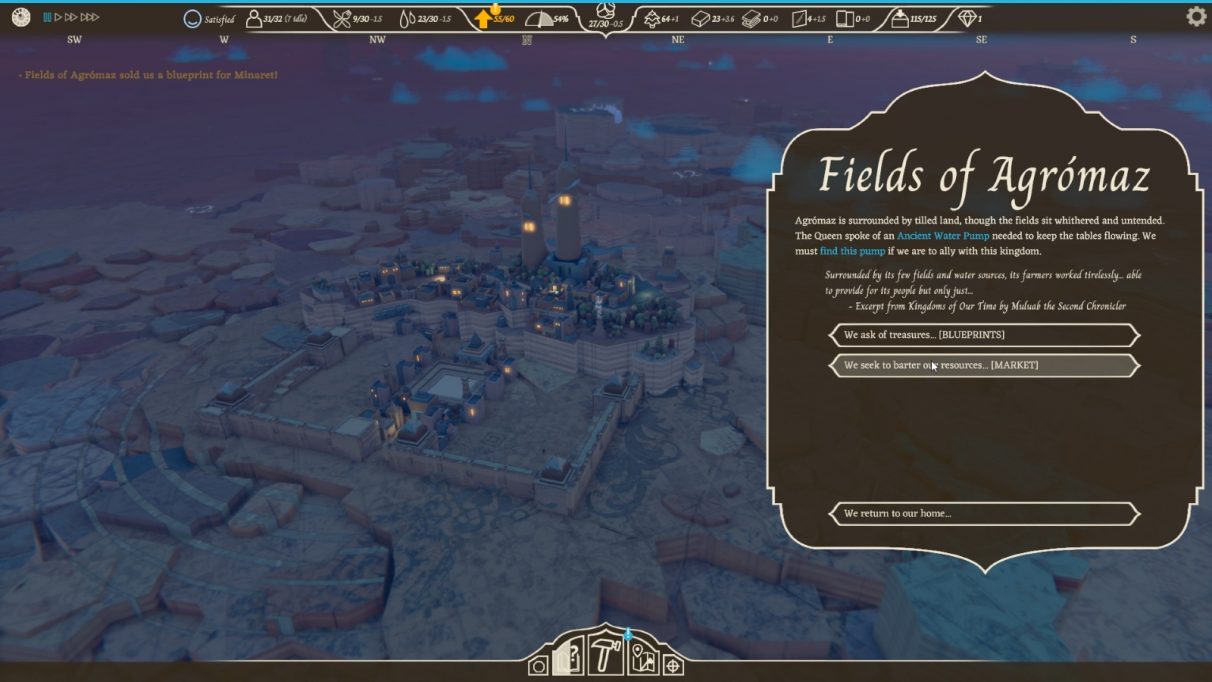 And again, it all just looks so fascinatingly different from what you'd expect from a story about a big airship. I love a hulking great doom zeppelin as much as the next person, but what's here is so much cooler. One of the constant challenges you face is keeping your city balanced - think that scene from Alan Partridge, where Alan attempts to conduct a meeting with an increasingly irate South African businessman, across a table he's trying to pretend isn't a toilet door balanced on a trestle. To aid you in this, you've got access to an ever-wider range of propulsion machines, and they're gorgeous. Street-length fabric wings doing slow, languid flaps, gigantic oars, citizen-pedalled whirly bits, even sails. And they all end up placed in beautiful asymmetry, so you end up with something that looks like China Mieville directed a Ghibli animation set in C15th Persia.

The game's mechanics, too, are equally fresh. City builders, to me, reuse way too many central principles, to the extent where I can confidently style out success in most new releases by instinct. And while Airborne Kingdom does bring out some old chestnuts (people get sad living near smelly industry, people without houses get sad), even the challenges which are familiar in principle become drastically less so in practice, thanks to everything that's different. Balancing your town, building out from a fixed anchor point, and ever-changing resource availability based on what's in range on the ground, makes playing on autopilot impossible.

The more I think about it, the more Airborne Kingdom feels like a weird, mirror-universe counterpart to Frostpunk, with its equally idiosyncratic set of rules. But while that game subverted tired steampunk tropes by leaning hard into the smog and the burn-scars, this one rises above the smoke altogether. It is, if you'll forgive me saying so, a true breath of fresh air.