As I said last time, my favourite thing about Red Dead Redemption 2 is the fact you can treat the game as an extremely perilous wildlife-spotting sim, with new creatures to behold every time you enter a new corner of the Cowboy's grotty, whiskey-stained world. Some 234 creatures, in fact. And as a mark of respect, largely to the concept of animals but also to the Cowboy, I'm writing short reviews of all of them. Last time I managed twenty, so there's only 214 left to go! Beast mode engaged. 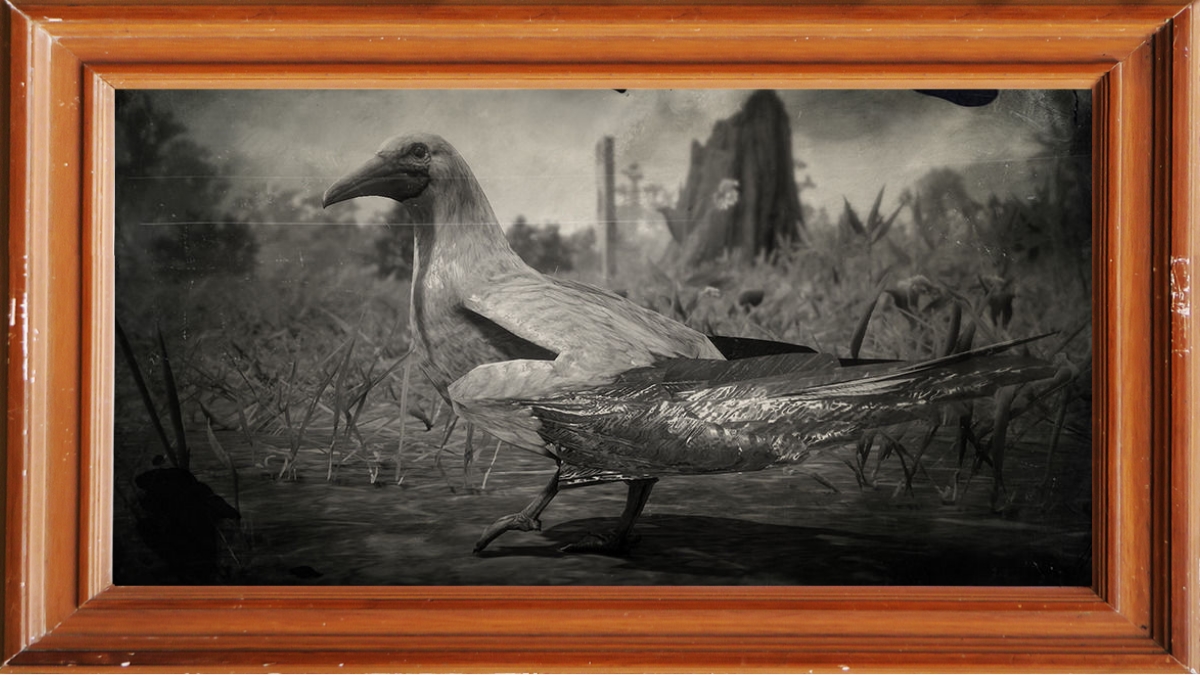 I feel bad for the ol' RFB. When it comes to boobies (haha, lol etc), everyone always thinks of the Blue-footed Booby, I think because it's pleasingly alliterative. Interestingly, Boobies aren't named after tits (also a sort of bird), but for the Spanish word bobo, which can mean "silly", "a fool" or "a clown". Poor Red-footed Booby, then, as it basically relegates it to being the subject of this tweet:

most cutting thing you can say is "who's this clown?" because it implies they're a) a clown & b) not even one of the better-known clowns

Verdict: 1/10. Not even one of the better-known clowns.

I mean, it's a deer, isn't it. Videogames basically use them as walking meat dispensers. I guess they're fine. But there is a strand of tragedy to RDR2's whitetail buck, even beyond the fact its titular tail makes for an unfortunately convenient target when the Cowboy's chasing them along train tracks with a bow. They're one of the few animals in the game to have separate models for each sex, and because of the alphabet, the bucks are forever separated from their brides, the deer, by 35 other animals. It's like Tolkien's ents, all over again.

Oh bugger, now I have to find something else to say about bucks. The Legendary Buck wasn't even that interesting in the game. I don't think I actually remember hunting it. Would have been cool if they'd given it a gun or a jetpack or something.

For UK readers - do you remember a period in the late 1990s/early 2000s when Britain was completely obsessed with Aberdeen Angus beef? I think that was the moment when animal breeds became marketing points, and it was really annoying. Anyway, these are the fellows responsible. The Cowboy, so far as I can tell, can detect no difference int he taste or quality of their meat. But then, I think all food tastes like ash to the Cowboy. 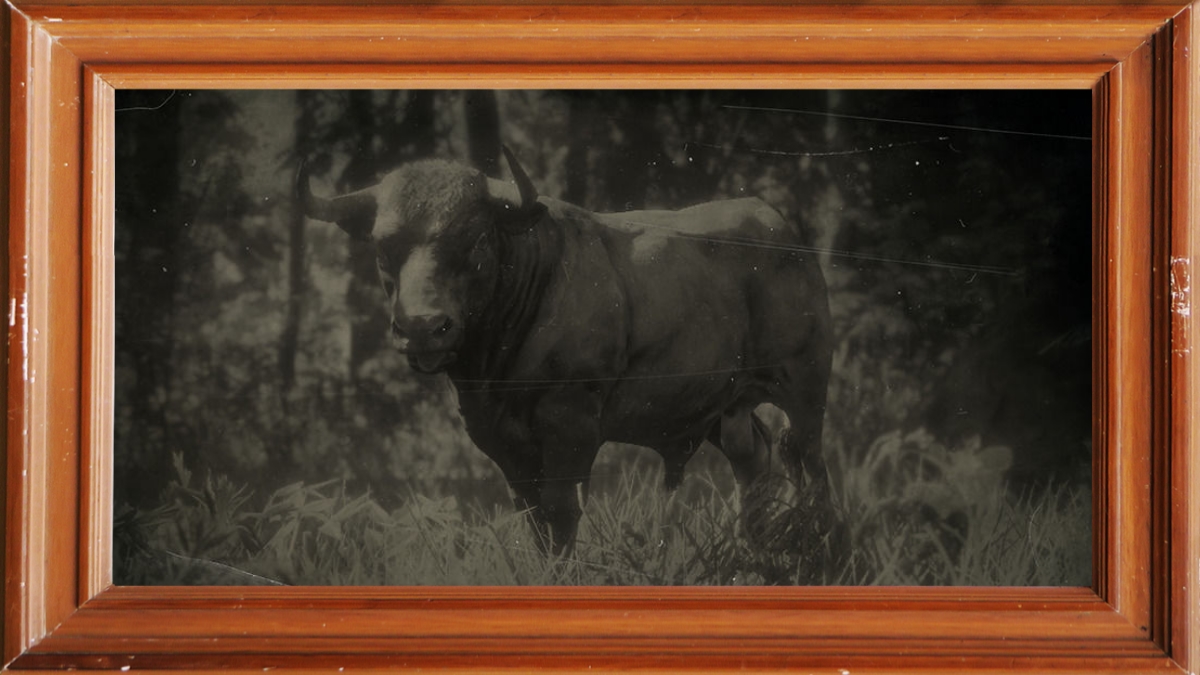 Ah, lovely. More bulls. Because of course, RDR2 went all in on farm animals. Never mind that they're mostly just blobs of beige that streak past at the edge of your screen as you're desperately trying to keep police bullets from getting into your skull, Rockstar needed multiple flavours.

Verdict: 6/10. I guess I like the fuzz on the top of its head. Looks like it'd be warm to stroke while you were being horned into fragments.

Nearly out of bull material now. Forgive me, but I've just never been that fascinated by farm animals. Although I guess that's more forgivable than my disinterest in most birds, which was quite rightly condemned in the comments section last week. I'm not proud of it, you know. Anyway, when I was a kid, my family stayed on a B&B attached to a farm. The lady who ran the place was really nice, but her husband had been kicked in the mind by a Hereford Bull some time in the 70s, and had never been the same since. He was prone to fits of rage, which isn't ideal when running a B&B.

Verdict: 2/10. They kick people and make them angry.

Ah, now we're talking. I bloody love fish, and catfish - the 3,000-odd members of the order Siluriformes - are some of my favourites in the whole bunch. Bullheads are a species to respect, capable of handling really poorly oxygenated, warm, and dirty water, so they're a true Swamp Classic. What's more, they've got taste receptors all over their bodies: imagine being so hardcore you lived in a fucking ditch, and could taste it with your whole body?

Verdict: 7/10. A lot of time for these boys, but they're still a bit like your standard issue catfish, aren't they? 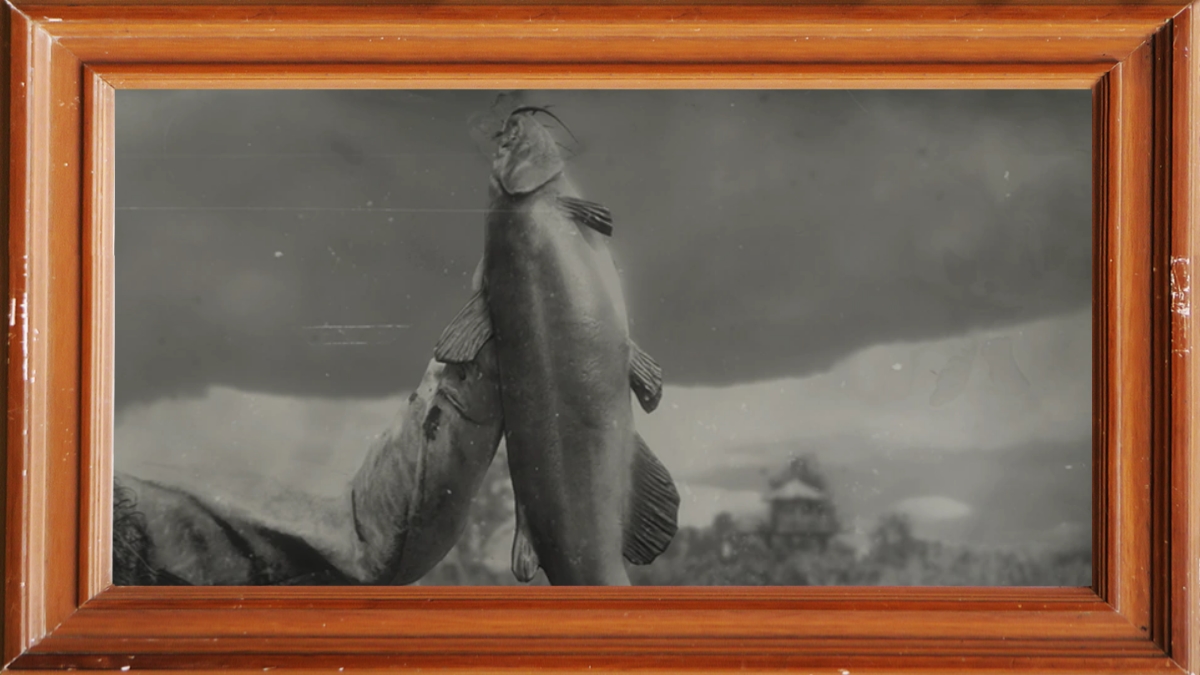 Here's another one of RDR2's fish that it seems a bit odd to call "legendary", given the record Bullhead IRL is - I think - around 4lbs in weight. I mean, good for that fish, but it's not exactly River Monsters With Jeremy Wade material, is it? God, I love River Monsters.

Northern cardinals, like the clergymen they are named after, are bright red all over, including their beaks, and have cracking Bart Simpson hairdos. However, they're pretty upsetting in Red Dead Redemption 2, because of the way the cowboy skins them. He just sort of grips them like someone bracing themselves to prise the lid off a tight jar of gherkins, then flexes his horrible arms, and with a sound like wet velcro, the cardinal becomes a small, dripping lump of degloved flesh. Rough.

I think it's pretty clear that Rockstar like dogs more than cats, because this is the only domestic feline in the game (unless you count the towering vision of Garfield that appears in the Northern sky if you play at midnight on the winter solstice, and which will answer any question the Cowboy asks of it, on the condition that it will also divulge the date of the player's death). Also, from cursory research, it seems that while there are specifically American breeds of cat, such as the American Ringtail and American Shorthair, there's no such thing - genetically speaking - as the "American Domestic Cat". So this animal isn't even real.

Oh no, we're back on cattle. Beef on the timeline, folks. Although... huh. I just checked, and despite all the bulls, this appears to be... the only type of actual cow in the game? Weird. Guess that's why it's called the Cowboy Game, then.

Oh FFS. I don't even know what the difference is between an Ox and a Bull, and now this is happening to me. So instead of reviewing this thing, I'll direct you to this really interesting piece about London's Angus Steakhouse restaurants, which look godawful and are nearly always empty even outside a pandemic, and yet never seem to go out of business.

OK, so I've looked up the definition of an ox. It's a bull. That's been castrated. So, they found the time to include no less then two variants of bollockless bullock in the game, but only one type of crab? Not happy with that. Also, how come the Hereford bulls don't have an ox variety? Presumably all the Cowboys were too scared of being kicked in the head and going mad to get near enough to castrate them. 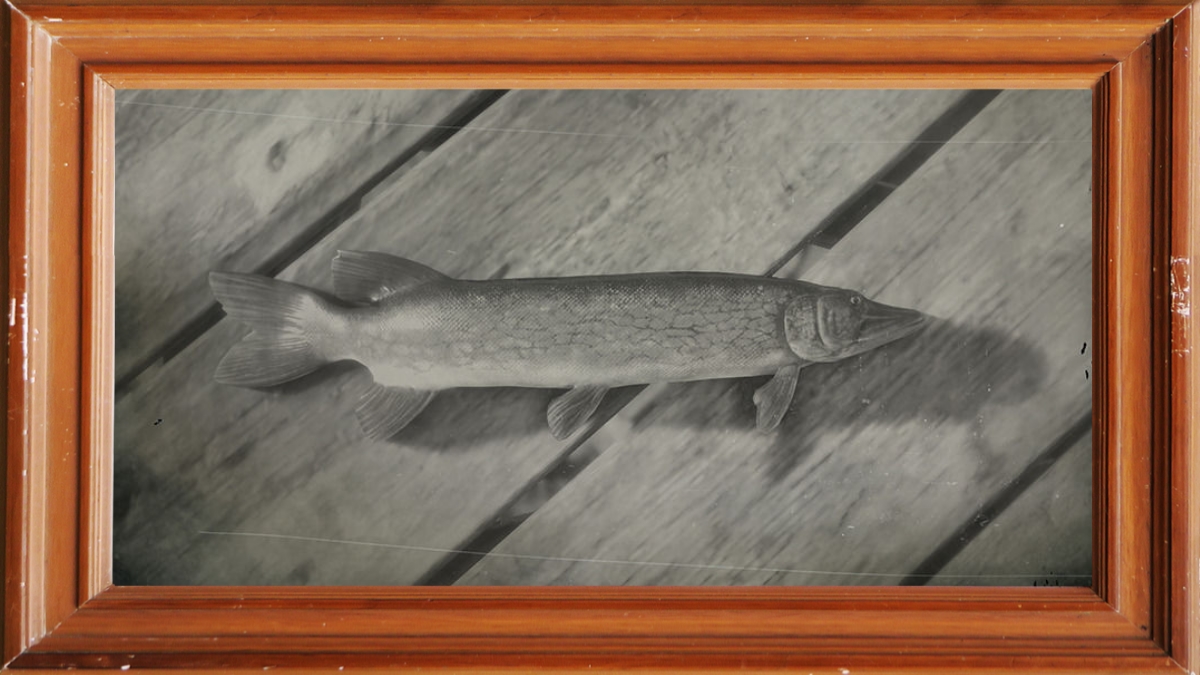 And thank goodness, we're back on fish again. And another freshwater favourite, the Chain Pickerel. A pickerel is a small kind of pike, which I wrote all about my love for here, so I'm damned glad they made it into RDR2.

Verdict: I don't know much about pickerel specifically, but I know this much: they're bad eating. "Like cotton wool stuffed with needles" was my dad's assessment, I remember. Not that I imagine that stops the Cowboy from eating them like mars bars, however. Perhaps the Legendary Chain Pickerel tastes like burgers, or something, which is why it's so highly valued?

This is, if you like, the standard issue American catfish - it's a good size, it's numerous, and it looks pretty much how you'd expect a catfish to look. Have you ever heard of "noodling"? It's a method of catching these fellows which involves sticking your hand into the muddy, submerged hollows in a riverbank where they lurk during the day, and waiting until you're bitten by one, before hauling it out to brain it. I saw this firsthand in Oklahoma once, and even gingerly had a go myself. Although I have to admit I was really half-arsed about it, because the same holes that channel cats live in are frequented by all sorts of exciting, highly venomous snakes, and I didn't much fancy having a die.

Finally, a fish worthy of legend. Catfish of all kinds are some of the most storied fish in the world, thanks to their propensity towards large size and living in murky, hidden places. From the Wels Catfish in Eastern Europe reputed to grow large enough to eat hounds, to the leviathan channel cats often rumoured to lurk behind dams in the American midwest, to the astonishing Namazu of Japanese mythology, there's just something about them that fires the imagination. 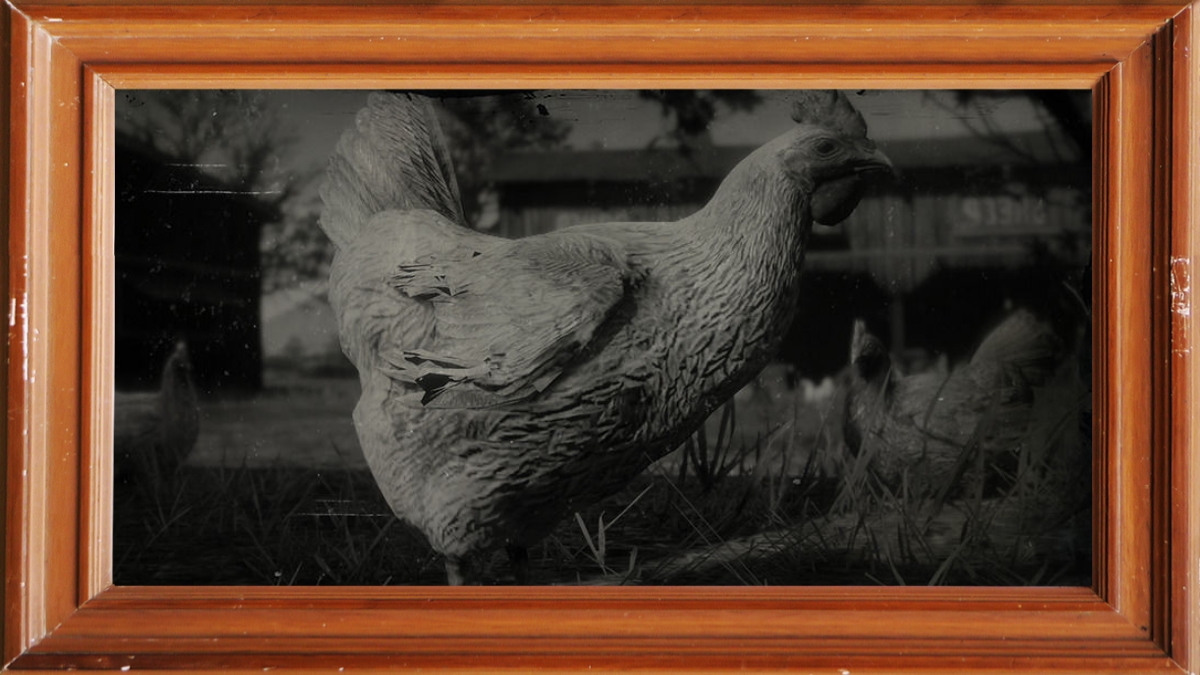 Dominique Chicken sounds like the mysterious love interest in an extremely lacklustre detective story. But it is, in fact, possibly the oldest chicken breed in America. That means nothing, however, when the Cowboy comes thudding through town on his big horrible draft horse. The DC'll pop under those dinner-plate hooves just as unpleasantly as any other domestic beast.

Surprise! The Java Chicken ain't from Java at all. It's just another old American breed, and thus part of the bewilderingly patriotic line-up of near-identical hens that insist on being in RDR2.

Verdict: ???/10. I'm not sure how many more farm animals I can cope with assigning arbitrary numbers to.

It is poor fortune on my part, I think, that bulls and chickens are nearly alphabetical neighbours, and that Rockstar were so enthusiastic about simulating them in all their remarkable variety.

I'm just going to pretend that said "American Crocodile" instead of "Greater Prairie Chicken". And why not? There are American Crocodiles in Florida, so they could feasibly be represented. And it'd be more fun than yet another chicken.

Verdict: 1/10. Better than the Lesser Prairie Chicken, at least. 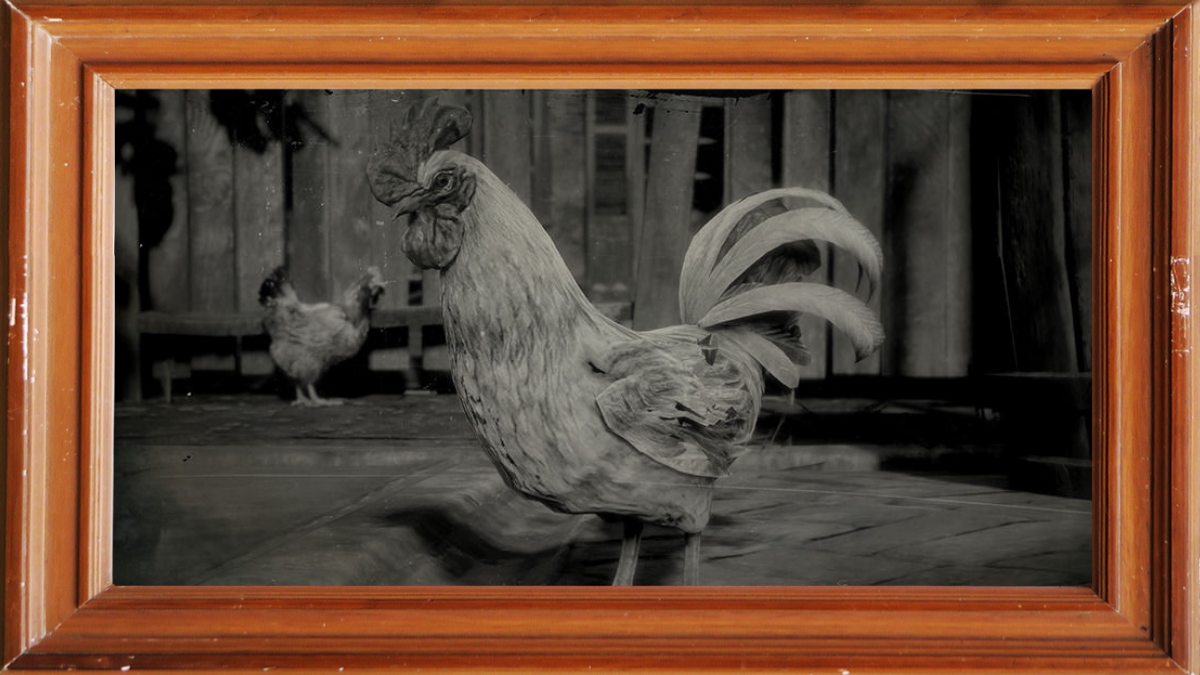 Actually, in fairness, all of this forced contemplation of barnyard banality has taught me something, so it's not been a total bust. Remember Foghorn Leghorn, that horrifying, barrel-chested bird from the old Looney Tunes cartoons? Well, I always thought his name was just rhyming nonsense, and never realised that his surname was his breed. So his name, essentially, is "loud chicken". Still, that's weird. Would be like a human being called "Mike Sapiens" or something.

Verdict: 2/10. At least I learned something.

Next time: no more farm animals! Maybe we'll get to dogs!