Well, I didn't expect to nearly burst into tears at the proof-of-concept demo for a management this week, but life is full of surprises, I suppose. The demo in question was for Among Ripples: Shallow Waters, a self-described "eco tycoon sim" slated for release next year, and I've had an eye on it for a while as part of my continuing mission to play as many games as possible dedicated to the simulated husbandry of fish. The nearly-bursting-into-tears in question, meanwhile, was prompted by the appearance of a pike - but we'll get to that. First, I'll tell you what the game entails.

Set in Sweden, it's a top-down, free-camera affair about repairing freshwater ecosystems. You're an ecologist, working to stock polluted, depleted bodies of water with plants and animals, and get things working like they should do. Plants oxygenate and filter water, creatures breed, and predators eat prey. The more your ecosystems burgeon, the more arbitrary money you get, and the more organisms you can stock. You can dig out the land around ponds to expand them. And at the moment, that's it. Even for a prototype, it's extremely basic, and developers Eat Create Sleep have a lot of work to do if they want to make it complex enough for extended play. But I can say, without hesitation, that what's there at the moment is one of the most likeable things I've dredged from the management game vortex in a long while.

For a start, there's the game's ethos. When I reviewed Rise Of Industry last year, I got really sad that so many games with the rough mechanical template of "expand to facilitate further expansion" fall by default into narratives of consumerism, colonialism, and the unfettered consumption of resources for the sake of profit.

I said at the time that I wished the genre could explore other ideas, and my wish came true - in a Stephen King monkey paw sort of way - when Rise Of Industry's first expansion tackled the rebuilding of advanced civilisation following a collapse precipitated by the ethos of the main game. That was a ballsy move, and I have to respect them for it, but even so, the expansion still had you basically trying to work around the bollocksing of the planet in order to start mass producing useless shite and bollocksing it all over again. It wasn't what I was after. 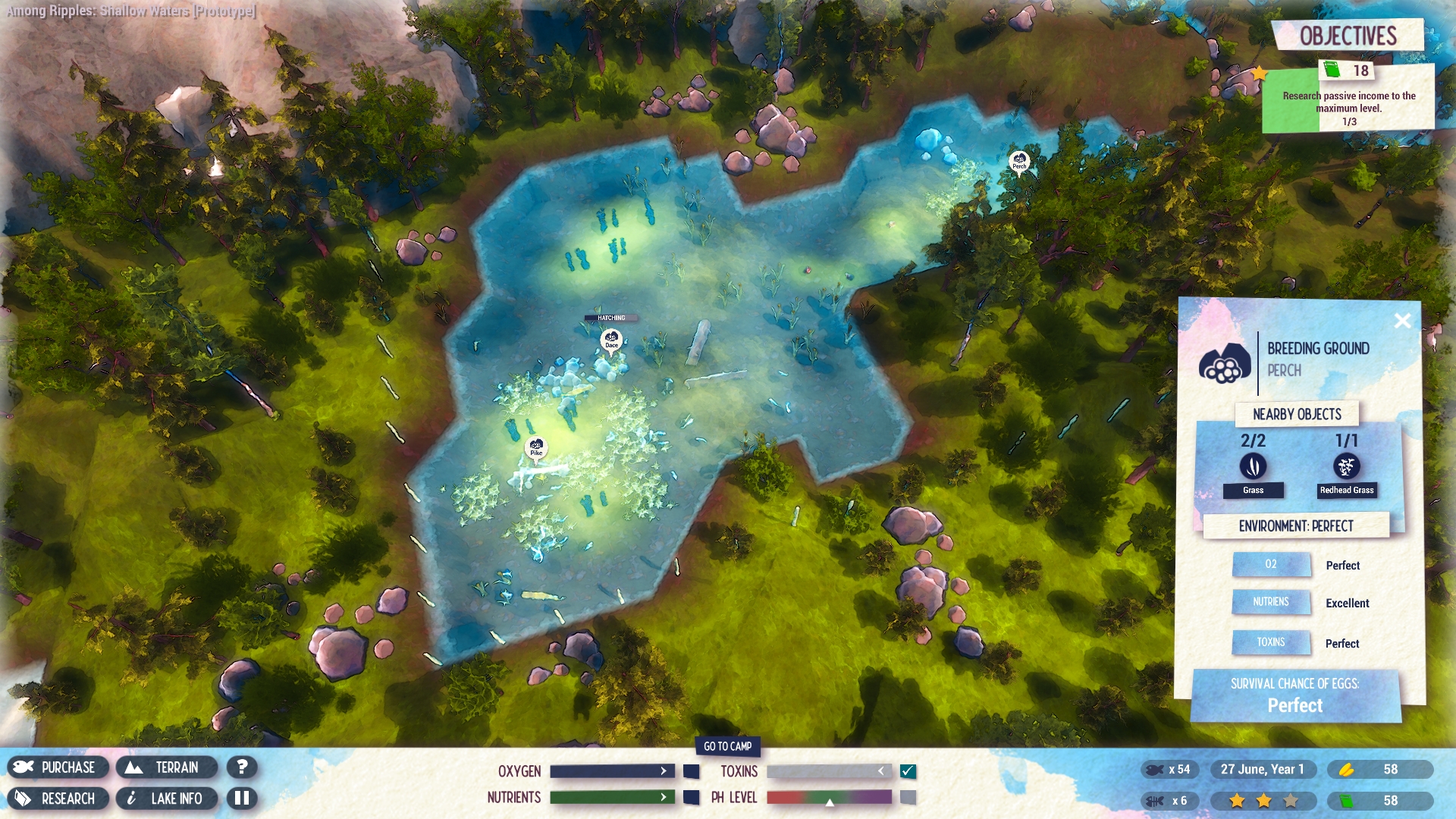 But Among Ripples turns the whole thing on its head. Yes, you're still trying to expand, expand, expand - but you're doing it on behalf of the fish, birds, plants and clams that have been steamrollered by previous human expansion. The "wilderness" you're trying to tame isn't virgin or indigenous land, being "optimised" in line with the manifest destiny of some dickhead's unspendably huge bank account: it's busted, poisoned marsh, that you're correcting to an approximation of its previous state.

The economics of the game don't really stack up - I'm not sure why you make money when fish lay eggs, unless there's some kind of government grant involved. But I kind of like the fact it doesn't make sense? It's there because it's a tried and tested mechanic for making a game fun, and it's lovely to see it co-opted from games about making loadsa dosh, and used as a means to a very different end.

There's lots more I like about the game. Its music is just a single track at present, but it's enormously relaxing, and suits the mood perfectly. When you move the camera underwater, the sound goes all underwatery - a feature that never fails to delight me when it shows up in a game. And while a lot of the visuals are still fairly ropey, otters spend ages stuffing their heads through the floor of the world, and everything looks a bit smudged (like it's been put through the watercolour filter on paint.net), the overall look of the game is very pleasant indeed.

But the real joy for me is in the subject matter. A game about ecological repair could have gone for something really big and flashy, with big, cute animals as the stars of the show, but these folks chose to make a game about freshwater ponds in northern Europe, and the sheer, thoughtful humility of that honestly gets me a bit emotional. These wetland environments are under enormous pressure in reality, and their destruction is every bit as maddening as the Brazilian government torching swathes of rain forest. But because there's nothing much big and sexy living in them, they just end up getting silently beasted, to the quiet despair of the people who love them, with not an impassioned, celebrity-endorsed fundraising attempt in sight.

This might be just the demo for a quiet little PC management game, but it's saying "hey, you know what's important? Dace are important." - and its heart couldn't be more in the right place. You may not have even heard of a dace. I only have because I spent mammoth amounts of time fishing with my dad as a kid, and every time he caught something, he'd tell me all about it, before slipping it back in the water.

And once you look at any animal for long enough to really notice everything about it, it becomes every bit as fascinating as a rhino or an alligator, and it really starts to mean something to you. So, then: pike - torpedo-shaped, olive green predators with carmine tail fins and jaws like the front of a fighter plane - meant everything to dad. He was obsessed. When he died, I retrieved no less than eighty books about pike from his study. He had spent a sizeable fraction of seventy years, probably, just thinking about pike, and yet it was never reflected back by the world.

I've often wondered, if dad had been around to read these posts of mine (which he would, and then get mum to text and tell me the jokes he liked), which one would have been the one to finally get him interested in PC games. And now I know - it would have been this one. Because when I first stocked a pike in one of my ponds, and it shot into the weed-banks with a flicker of that powerhouse tail, scattering a shoal of dace as it went, I could almost hear his voice leap an octave, and see his finger stab at the screen in joyful disbelief. "They've got pike in this," he would have said, with the awe of Alan Grant seeing the brachiosaur in Jurassic Park, "pike!". Then, grudgingly, because he hated computers, he would have asked me to tell him "how to use this 'Steam' thing", and that would have been that.

Dad's second favourite fish were perch... which are also in the game. I got a lovely screenshot of one: 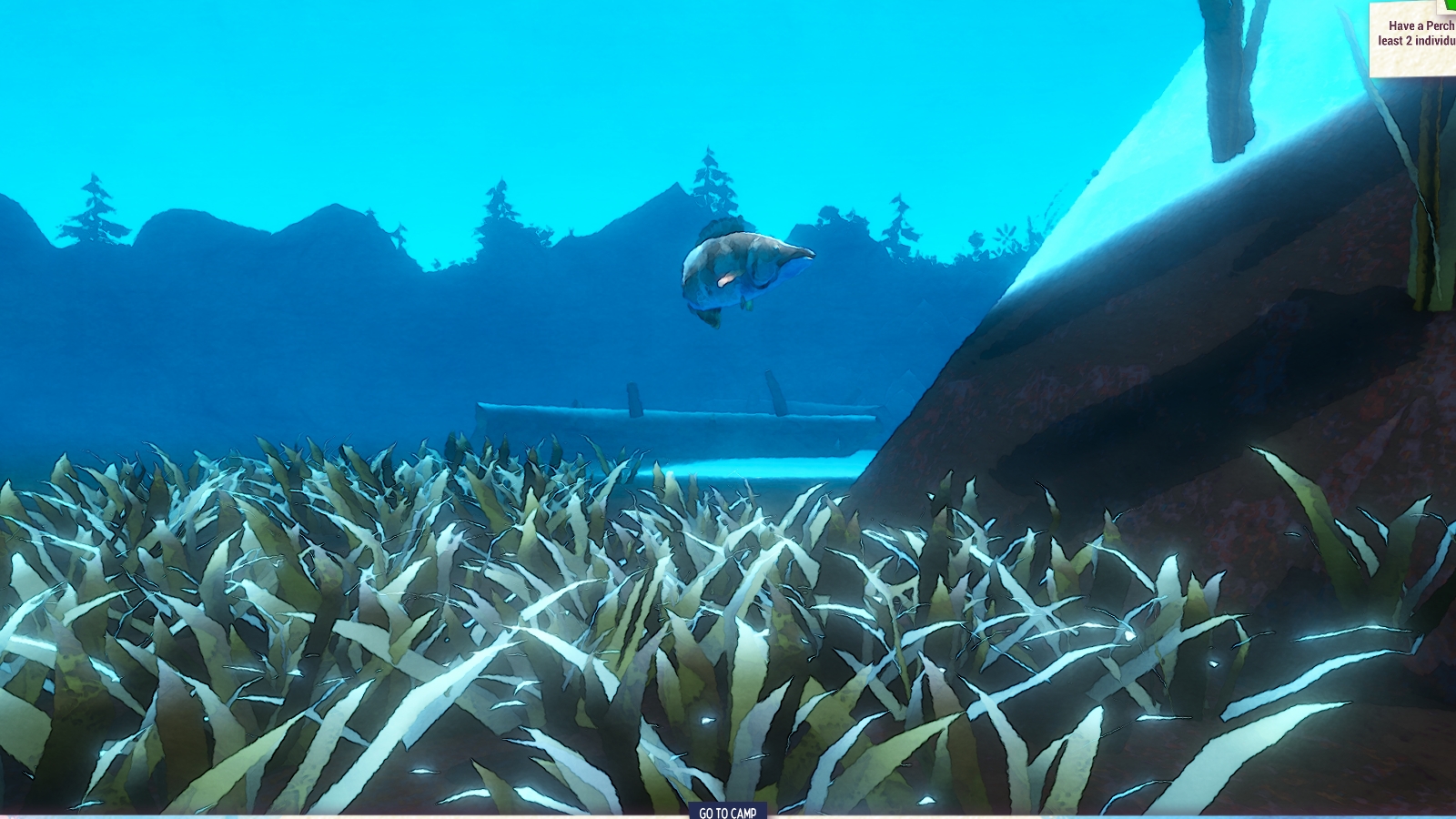 So, yes. Thank you, Eat Create Sleep, for thinking of pike. Now please put eels in as well, because they're my favourite. In fact, if you're reading this, go download the demo, subscribe to the developers' newsletter (there's a prompt in game), and let them know you expect eels. I'll be waiting.