I am in continual awe of what tiny independent developers are capable of these days. While jetfighter action game Project Wingman may boast a couple of additional names on its credits, it's primarily a one-man project. Given that it looks, sounds and plays every bit as good as Namco's Xbox 360-era Ace Combat 6, if not better, that's nothing short of mindblowing. Better still, the lengthy 3-mission demo (which led to the project's Kickstarter being funded in mere hours) is just the tip of the iceberg of this gorgeous tribute to a favourite series.

If you've never played an Ace Combat game before (quite excusable - the only one to reach PC was the pretty naff Assault Horizon), what you're getting here in Project Wingman is a game that sells the fantasy of modern jetfighter combat, without bogging itself down with any of the more fiddly, realistic details. Swarms of planes swoop around each other, firing salvo after salvo of constantly replenishing smoke-trailing missiles. A gamepad is highly recommended, but the game also offers support for more complex HOTAS-type setups if you really want to show off.

Ace Combat fans will be happy to hear that this hits all the notes you'd want, including an alternate-earth setting with familiar aircraft, but unfamiliar nations, plus a fair bit of sci-fi technology. Two of the three demo missions throw you into combat against aerial battleships bristling with anti-air missile and gun emplacements which must be whittled down to size before you land the killing blow. The amount of polish on show here despite this being an early alpha build of the game aimed at securing funding is truly impressive - even the voice acting sounds AC-authentic.

Project Wingman's lead developer, Abi 'RB-D2' Rahmani has some exciting plans for the full version of the game, and even later iterations of the demo. On top of the story-driven campaign mode (wherein you play a mercenary pilot), the Conquest Mode promises a non-linear, semi-roguelike dynamic campaign where you run your own mercenary force. You pick missions to undertake and spend profits on increasing your supporting forces, up to and including heavy capital-class vessels, which reminds me of both Sky Rogue and Strike Suit Infinity in equal measure. 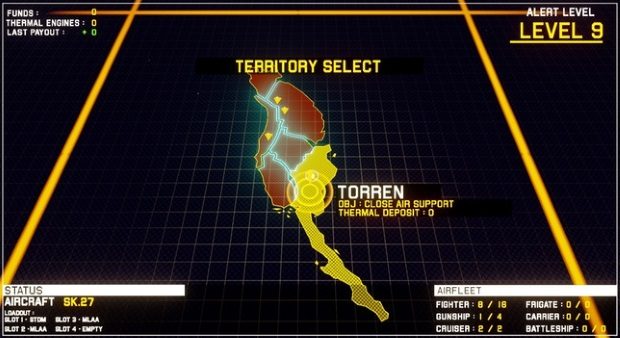 As mentioned, the demo is largely to drive interest to Project Wingman's Kickstarter funding page. The game hit its target £19,791 goal (converted from $25,000 Australian dollars) within about twelve hours, which gives it another 34 days to bulk up the budget. The developer's conservative estimate is that the game will be finished sometime in May 2019, although I can imagine that if this ends up funded ten times over, that may be extended somewhat to allow for greater scope. I know I'd like to see more sci-fi units included. Anyway, we'll have Ace Combat 7 to try while we wait.

You can grab the Project Wingman demo over on Itch.io here,  and find the Kickstarter page here. £14 ($25 AU dollars) will get you a copy of the game when it's finished.