The process from phone to PC is often a troubled one. But how does a long-time mobile favourite fare with its transition to Alphabear: Hardcover Edition [official site]? Here's wot I think:

Alphabear is one of my absolute favourite mobile games. I played it to death, comprehensively completing it (before losing progress to a phone change), and even broke it in places by being really good at it. 15 letter words, it turned out, weren't expected, and messed up the display at the end of games. 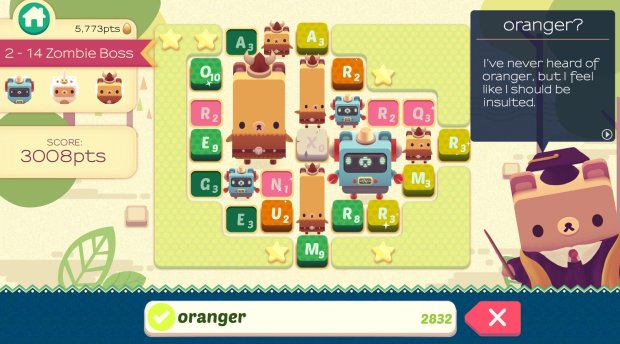 The game is a really splendid interpretation of the classic 'make words from a grid of letters' formula that's been around since Boggle. Here, a grid of tiles each contain a letter, but are only displayed when you've formed a word using an adjacent tile. So not only must you discover words you can spell from the limited selection, but also select them tactically, such that you best open up more of the grid - or indeed, not open too much of it at once. Because tiles also have a countdown number on them, ticking down with each turn, and turning to immovable stone once they hit 0.

It's the combination of these tactics, alongside the satisfaction of spelling out a good long word from the randomly selected letters, that makes it such a strong formula. Add in timed levels, and indeed grids with obstacles to make progress more tricky, and then the unlockable bonus bears from which you pick a selection allowing you to improve your final score (perhaps by increasing the likelihood of a particular letter, or adding more seconds to a timed level, or adding on huge percentages of bonus scores), and you've got a properly great puzzle game.

So news of a PC version, with the title Hardcover Edition, seemed splendid. It's been two years since the mobile version was released, so there's a decent amount of time that could have gone into reinventing it for a desk or laptop, perhaps with new game modes, new, larger grids for bigger screens, multiplayer options...

It doesn't even have separate sound and music controls.

This is an anticlimactic, if very high def, port of the game, that absolutely takes no advantages of the new platform, right down to not even bothering with proper resolution options. (You can resize the window, but at certain sizes the in-game presentation breaks.) And indeed, it's not possible to play with the useful sound effects on, without also having the irritating music, because, er, that's how it is on the phone.

The newly landscape presentation takes little advantage of what it could offer, never making smart use of the new space, say telling you what type of game you're selecting bears for on the bear selection screen. It's still behind a button click, when there's absolutely no need. In fact, the now wide rather than long screen should make much more sense for level selection, but instead it doesn't automatically scroll to put the new main level in the centre any more.

What it has added is a learned bear who pops up with definitions of the words you're spelling. That's a nice touch, although it's too slow to keep up with the pace in timed levels. It also has some odd holes in its dictionary. "HATSTAND", "ORANGER" for instance, bemused it. That's further odd because the game accepts these words, just doesn't know them, which also includes a lot of those desperate might-be-a-word words you could try out in a tight spot. More annoying is completely absent words, like "MACARON" - familiar to any Bake Off fan, but not Alphabear. It's also peculiarly shy, ignoring one particular swear despite including all of the others. I'll leave you to discover which one that is - the definitions certainly make spelling out rude words a lot more entertaining. 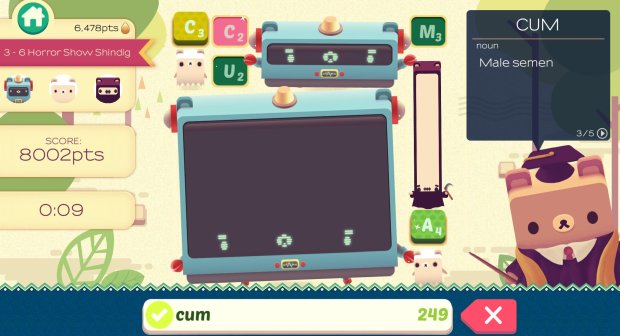 One of Alphabear's charming little features is the way it creates a sort of Madlibs-style collection of sentences at the end of a round, putting in words you've created to make silly statements. All the better when you've managed to make rude or unpleasant words. And on mobile, this then came with the super-smart option to plaster that image all over social media at a button tap. Smart because it's fun, and smart because it was a great way of getting players to promote the game. So it's especially odd that the PC version reduces this feature to a Steam screenshot. Why no Twitter and Facebook button?! I want to share the time I got it to say, "Ejaculation: it's what's for dinner"! (Fortunately I work for a website with millions of readers, but hey, some people are less fortunate than me.) 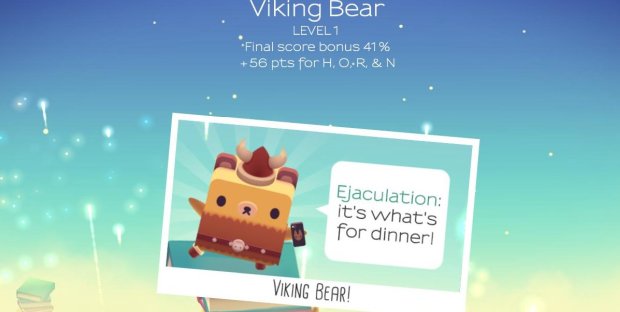 So in the end, this is still Alphabear, and Alphabear remains a lovely, smart puzzle game. It still sports Spry Fox's utterly gorgeous drawings, and the bear designs - of which there are dozens and dozens - are still just as lovely. But it's nothing new. There's the Verses (the spelling deliberate) Mode, that lets you play a game and then challenge others, but again the obvious option of sharing that challenge on social media is entirely removed. Instead it ambiguously informs me my friends have been challenged, which I assume is via Steam, but not in any obvious way. And there's the daily challenge, which is on the phone too.

This was crying out for a new version, an evolution of Alphabear better suited for bigger screens. Something that might make sense of the newly added "Hardcover Edition" mantle. Instead we've got a slightly less good version of the two year old phone game. Which is still a top game, but, you know, not really something to write home about.