Here on RPS, we tend not to cover Kickstarters unless they are securely funded already with a clear shot at making it to release, or are so undeniably fascinating that it would be a crime to not at least say something about them. Ambition: A Minuet in Power falls into the latter category, as its Kickstarter page should prove.

It feels a bit of a misnomer for Ambition to bill itself as a roguelike first and foremost. While there are high-stakes conflicts (of a sort) and elements of resource management, perhaps 'Princess Maker for backstab enthusiasts' would be a better fit for this game of quiet politicking and social manipulation against a French revolutionary backdrop.

Coming from the rather brilliantly named Joy Manufacturing Co. (I'm sure there's some studio somewhere very jealous that the name has already been taken), Ambition casts you as Yvette Decaux, a comfortably middle-class young woman of fashion in a particularly dangerous part of French history. Your mission is to survive the revolution, and come out as wealthy, powerful and famous as you can, all without raising a hand against a soul. At least, not directly.

It's an exciting concept. Social manipulation is something so rarely tackled in games. Rather than having combat in any traditional sense, Ambition promises that parties and ballrooms will be the battlefield, with you spending your resources of knowledge in various subjects and confidence in order to influence characters. Once sufficiently swayed by your charms (or even led to the bedchamber), they become more susceptible to your influence, allowing you to push your personal agenda forward through them, whatever it may be.

It's all quite lush looking as well. A key focus of the game is dressing for success, with your outfits determining the reactions you get from various groups and individuals, and Joy Manufacturing Co. claim to have based every single piece of clothing in the game off well-researched historical texts, meaning that fashion isn't just fun, but educational as well. Likewise, the soundtrack aims to reflect the styles of the era, with aristocratic and revolutionary factions represented by different schools of music. 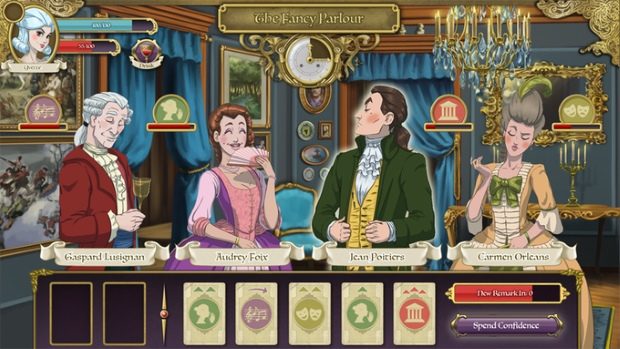 Which side succeeds during the revolution will be determined by your influence on the political powers of Paris, meaning your persuasive power is such that you can wildly alter the course of history. There's some shades of Crusader Kings 2, but the more personal, character-driven focus feels new and fresh, and not really explored anywhere outside of perhaps King of Dragon Pass.

While the Kickstarter stretch goals now seem unlikely to be met (including the ambitious final one, promising a second campaign playing as a Haitian woman struggling to claim a promised inheritance, offering a very different perspective on the revolution), there's a good chance that this will at least hit the baseline funding goal of £45,000. Funding closes on December 17th on this one, and $20 will be considered equivalent to a pre-order.

I wish Joy Manufacturing Co. every bit of luck in their endeavour. If nothing else, that name will carry them far in the coming years.