As the great graphics card mining crisis rumbles on, picking a time to upgrade your PC has become a minefield of inflated prices and overblown mark-ups - and nowhere has this been felt more keenly than AMD's new Radeon RX Vega 56 card and its big brother, the Radeon RX Vega 64.

Whereas the RX Vega 64 targets the Nvidia GeForce GTX 1080 (our current favourite graphics card for 4K gaming), the RX Vega 56 takes aim at the Nvidia GeForce GTX 1070. That is, an excellent graphics card for 2560x1440 resolutions with ambitions of pushing into the 4K arena with a couple of compromises. And yet their respective prices couldn't be more different, with the cheapest GTX 1070 currently costing around £500 / $665, while the poor old RX Vega 56 will set you back at least £750 / $750. The easily-parsable Asus Radeon RX Vega 56 ROG Strix OC Gaming version I've got here demands even more, too, with prices at time of writing sitting lamentably out of reach around the £840 / $900 mark.

This immediately puts the RX Vega 56 on the back foot, regardless of which make you go for, but assuming everything starts settling down at some point in the future (and good gravy I hope they do), I'm going to ignore prices for the moment and just focus on whether it's just a good graphics card. Capice? Capice. Let's get to it.

So what makes the Asus so fine and dandy and worth that big old premium over lesser Vega 56 cards? Well, much like the ROG Strix OC version of the RX Vega 64 we tested not that long ago, the ROG Strix OC Vega 56 comes with 8GB of High Bandwidth Memory 2 (HBM2), which uses stacked memory to make everything faster and more efficient, and a trio of IP5X dust protected fans. This means it should theoretically last longer and be less likely to get clogged up with blankets of gunge in a couple of years time.

As its name implies, it also has overclocked cores, giving its base clock speed a small bump from 1156MHz up to 1297MHz and its boost clock speed a nudge from 1471MHz up to 1573MHz. You get Asus' fancy RGB tech, Aura Sync, as well so you can colour-code your card to match your compatible Asus motherboard, mouse and keyboard, and you also get a decent selection of ports, including two HDMI 2.0 outputs (handy if you're a VR cybergoggles owner), two DisplayPort 1.4 outputs and one DVI-D output.

The Asus continued to impress when it came to playing some actual games, too. First up in the testing arena was fancy dress simulator Hitman, and goodness what a convincing performance. Agent 47 positively glided through the Parisian fashion crowds at 1080p and 1440p on Ultra quality settings, with the frame rate regularly hitting an average of at least 80fps at both resolutions in its built-in benchmark tool. 4K wasn't much trouble for it on Ultra either, with an impressive average of around 51fps.

Doom, likewise, didn't put a foot wrong, with the RX Vega 56 handling all three resolutions on Ultra without breaking a sweat. I didn't have the benefit of a benchmark tool, but the Vega 56 was almost certainly hitting at least 60fps across the board when I ran through the first big firefight at the UAC, with nary a dip even at 4K. 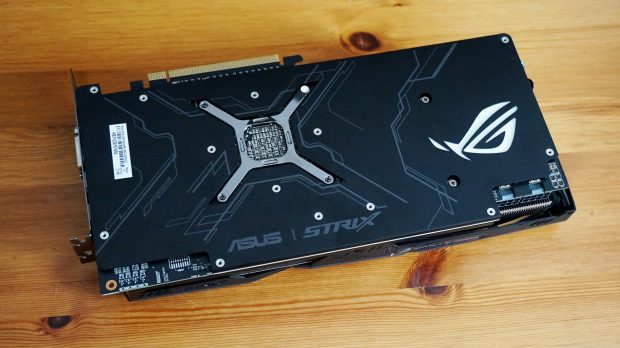 Wolfenstein II proved equally amenable at 4K on its highest Mein Leben setting, rarely dipping much below 60fps even in heavy firefights. The rest of the time, you can easily expect frame rates somewhere between 75-80fps at 4K, and even higher at lower resolutions.

The RX Vega 56 started to feel the pressure when I turned my attention to Rise of the Tomb Raider, however, especially when I threw its power-hungry super-sampling anti-aliasing (SSAA) into the mix. You can just about get away with everything set to max (Very High, SSAA x4) at 1920x1080, with an overall average of around 52fps in its built-in benchmark, but I had to drop the quality and SSAA down to High and x2 to get similar results at 2560x1440.

As for 4K, you're looking at a crawling average of 20fps with everything on max, but I still managed a perfectly playable average of 48fps on High with the lowest possible anti-aliasing setting (FXAA). Here, I saw regular highs of at least 60fps in each of Rise of the Tomb Raider's three benchmark scenes, so it's still possible to get a decent experience at 4K without having to make too many compromises. 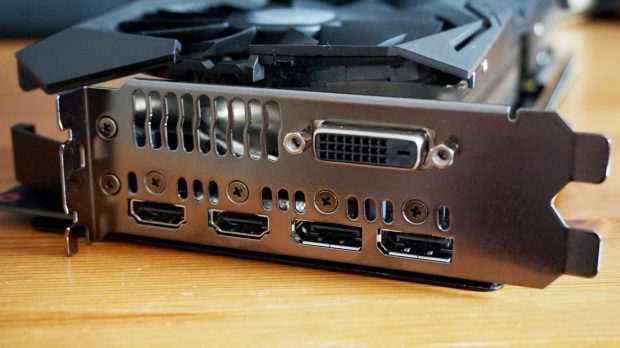 Sadly, the same can't be said for the ever-challenging Total War: Warhammer II. Again, you'll be absolutely fine at 1920x1080 on Ultra, but the frame rate dipped to around 50fps when I moved up to Ultra at 2560x1440, with lows of roughly 40fps when zoomed in within an inch of a Lizardman's spear. At 4K, you're really looking at settling for Low to get decent speeds, as even Medium didn't rise much above 35fps in battle and 40fps when flying round the campaign map.

Assassin's Creed Origins was also a challenge for the RX Vega 56, as even running the game at max settings at 1920x1080 only returned a 'medium' performance rating in the game's benchmark. That's still an average of 54fps, mind, but I had to drop the quality down to High at 2560x1440 to get similar speeds. At 4K, High was deemed 'unstable', returning a slightly stuttering average of around 30fps, and it was only when I put everything right down on Low that I started to see the frame rate pick back up to around 45fps.

Fortunately, most of my other test games fell into the same camp as Rise of the Tomb Raider - lovely and smooth at 1080p and 1440p with 60fps frame rates, and only a little bit of dialing back when ratcheting it up to 4K. In Middle-earth: Shadow of War, for instance, you can just about get away with High at 4K, which saw an average of around 47fps (Ultra maxed out around 35fps), but you only gain an extra five frames or so by dropping down to Medium. 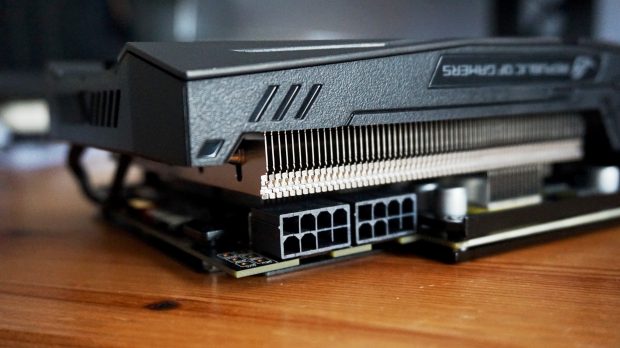 The Witcher III was much the same, performing brilliantly at 1080p and 1440p on Ultra, but feeling much happier on Medium when I bumped the resolution up to 4K. Here, I saw an average of around 50fps, dipping to 45fps during particularly busy town scenes. High will still get you around 40fps at 4K, but panning the camera round with my mouse was a jerky, nauseating mess, regardless of whether I had motion blurred turned on or off. Medium, on the other hand, was noticeably smoother, and significantly kinder on my eyes and stomach.

Overall, Asus' Radeon RX Vega 56 was more or less slap bang in the middle of our benchmark results for the GTX 1070 and its big brother, the Nvidia GeForce GTX 1070 Ti, beating the latter in some instances like Shadow of War, Doom and Wolfenstein, but falling back down in line with the GTX 1070 on everything else. Often there were only a few frames between each card, but sometimes that was enough to tip the GTX 1070 Ti over into a higher quality setting while the RX Vega 56 had to settle for something lower. Assassin's Creed Origins was the most obvious example here, as the RX Vega 56 only managed 45fps on Low at 4K, while the GTX 1070Ti churned out 47fps on Medium.

As such, the GTX 1070Ti is still probably your best bet if you're after something that's 4K capable and don't have the cash to get Nvidia's GTX 1080. As an almost flawless 1440p card, however, it really comes down to which one you can buy for the least amount of money. Right now, that definitely isn't the RX Vega 56 in the UK, as even the GTX 1070 Ti can be found for £600 as opposed to the Vega 56's £750 minimum asking price. In the US, the cheapest GTX 1070 Ti I could find was this $765 Asus model, which is $15 more than the cheapest RX Vega 56 currently on offer from Sapphire.

Then again, it's hard to tell when or how prices will eventually settle down in the future. Really, you shouldn't be buying a new graphics card right now full stop, unless of course you've got a spare garage of cash knocking about. All things considered, though, I suspect the GTX 1070 Ti will probably be the better value card in the long run. It's still very much a wait-and-see situation at the moment, but however much they all end up costing, the RX Vega 56 puts in an admirable performance, both at 1440p and at 4K.