Just as the Radeon Vega RX 56 targets the Nvidia GeForce GTX 1070, the Vega RX 64 is AMD’s precision strike on the mighty Nvidia GeForce GTX 1080. About damn time, too – by focusing solely on the mid-range and entry-level RX 400 and RX 500 series (which you can read more about in our AMD Radeon RX 580 review), AMD has given Nvidia free reign of the premium market for about two years. Time for some competition in the best graphics card tourney, methinks.

The model I’m testing is Asus’ ROG Strix version, or to use its full title for the only time in this review, the Asus ROG Strix RX Vega 64 OC Edition. The poetically-named ARSRV64OCE builds on AMD’s tech – which includes 8GB of High Bandwidth Memory 2 (HBM2), which stacks its memory modules units on top of each other, supposedly speeding up how long it takes to talk to your CPU – with a nifty three-fan air cooler and, as the name suggests, overclocked cores. It’s only a little bump, mind, upping the base clock from 1247MHz to 1298MHz and the boost clock from 1549MHz to 1590MHz. As to whether all that makes the RX 64 as capable as the GTX 1080 at 1440p and, perhaps most importantly, 4K, the answer is: yes! Pretty much!

It unsurprisingly tore through Doom with barely any visible difference between maxed-out 1080p and 1440p (fair warning, I’ll be saying that a lot), and 4K looked really rather lovely as well. You could tell that the framerate had taken a knock, but not nearly to the extent that it looks unsatisfactory.

Hitman also produced no issues to speak of, other than the fact that – and I’ll admit I have no idea why this could be – it seemed to be slightly more stable during big crowd scenes at 1440p than at 1080p. 4K also held up well, with no need to turn down any settings unless you want to get the most frames out of a 144Hz monitor.

Middle-earth: Shadow of War was also spared any big dips at the lower resolutions; we’re sure there was a difference in smoothness between 1080p and 1440p, but you’d need a frame rate counter to see it. 4K, conversely, was where we first saw the RX 64 under some real strain, hesitating ever-so-slightly during the more bombastic action moments. It always remained playable, to be sure, but it’ll be a matter of taste whether to suck up these drops in exchange for the best quality settings or to lower them for better consistency. 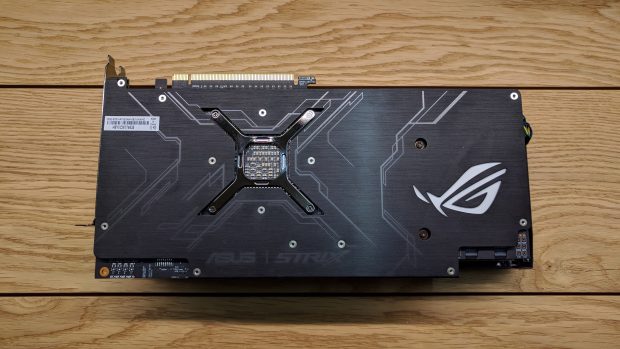 Rise of the Tomb Raider got a bit dicey at 4K, too, particularly when there’s an abundance of particle effects or foliage onscreen. It probably is worth disabling some of the more opulent options here, though at 1080p and 1440p, the RX 64 seemed much more comfortable with everything on full.

Total War: Warhammer II looked about as good as you can expect from this game at 1080p with a single GPU, both on the campaign and battle maps. Switching to 1440p made Asus’ fans pipe up, but the game itself still looked grand, occupying the sweet spot between shininess and smoothness. 4K performance, sadly, wasn’t up to snuff – on the battle map, it’s jittery when you’re both up-close on units and high about the field, and the campaign map fares even worse. There are some high points on the latter, though, so playable 4K isn’t out of reach – you’ll just need to sacrifice some fidelity for it.

Again, Wolfenstein II: The New Order made the fans go into wind tunnel mode, but it was worth it: the RX 64 makes it fantastically smooth at both 1080p and 1440p, with do drops, stutters or lurches at all. I expected it to stumble at 4K, but impressively, it never did. In fact, to my eyes it runs almost as sleek as it does at 1440p, at least during any indoor corridor shooty bits (which, to be fair, make up a fair chunk of the game). 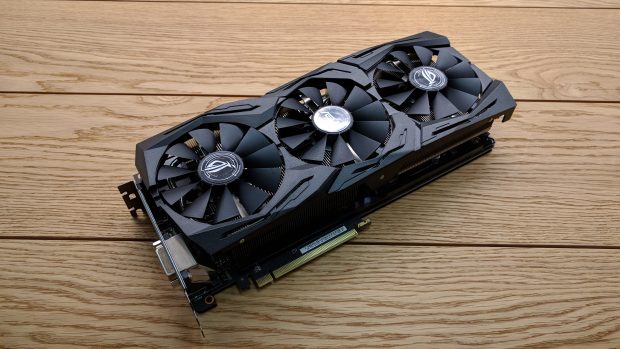 The Witcher 3 isn’t quite so spectacular on the RX 64, but it’s still a pretty picture at 1080p and 1440p. Transitions between tight, highly detailed areas and massive expanses are handled particularly well. 4K takes the sheen off a tiny bit – I preferred it running with High presets instead of Ultra – but it's a small price to pay (not counting the hundreds of pounds you've just spent on the card, I guess) to get the Witcher’s world looking this nice.

Rounding things out, we can add Assassin’s Creed Origins to the list of games that look really bloody good on this card. Even next-tier-down cards like the Nvidia GeForce GTX 1070Ti can stumble at 1440p and above, but here, all the resolutions up to and including 4K handle ultra-high settings with ease.

Props also to Asus, who’ve done a characteristically good job with their hardware additions. IP5X dust resistance was a pleasant surprise – I can’t say I’ve ever lost a graphics card to an onslaught of that super-fine, heat-treated muck you only get inside PCs, but as someone who doesn’t have a cleanout as often as he should, it’s some extra peace of mind at the very least. 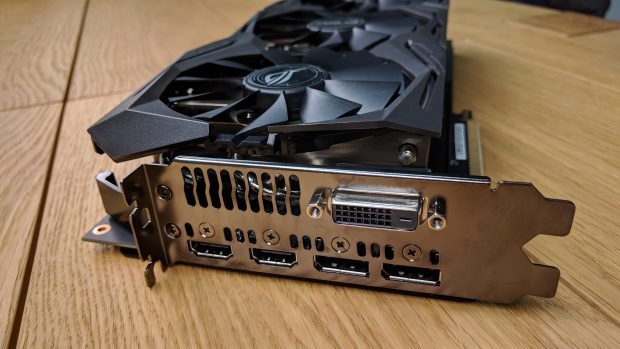 Another nice touch is that this has two HDMI ports instead of one; this could be very handy if you own or desire a VR headset and you already have a monitor hooked up via HDMI, as virtual reality gear typically also uses this connector. With an extra, you’re less likely to be short on ports.

Here’s the problem, however: this particular card has vanished from online retailers (you can pre-order one at Scan for a whopping £900 if you really want to), and I’m still waiting on Asus to confirm when it’ll be back up. In fact, most partner-customised RX 64s aren’t even out yet, if they’re even in the works at all. Asus, Gigabyte and PowerColour are the only ones that seem to be available at the moment, and that's if you can actually find one in stock. This just leaves cards that are, for all intents and purposes, the reference design, with its boxy, loud blower-style cooler.

However, when overclocked, better-cooled partner versions of the GTX 1080 are currently going for around £650 (which is still ludicrously high thanks to our dear cryptocurrency miner friends), my advice would be to either wait until customised RX 64s are more… existent (not to mention existent at sensible prices), or go ahead with the GTX 1080. Really, though, you should just wait until prices return to normal.