It's been quite a while since AMD first launched their new Ryzen 3000 CPUs, but I've finally managed to get my hands on the last remaining member of their new gaming CPU family, the Ryzen 7 3800X. It's the even nippier big brother of the already excellent AMD Ryzen 7 3700X, but with the even more powerful Ryzen 9 3900X now sitting above it in the Ryzen family pecking order, this eight-core processor definitely has an air of 'awkward middle child' about it. Does it still have what it takes to muscle in on our best gaming CPU list? Here's wot I think. 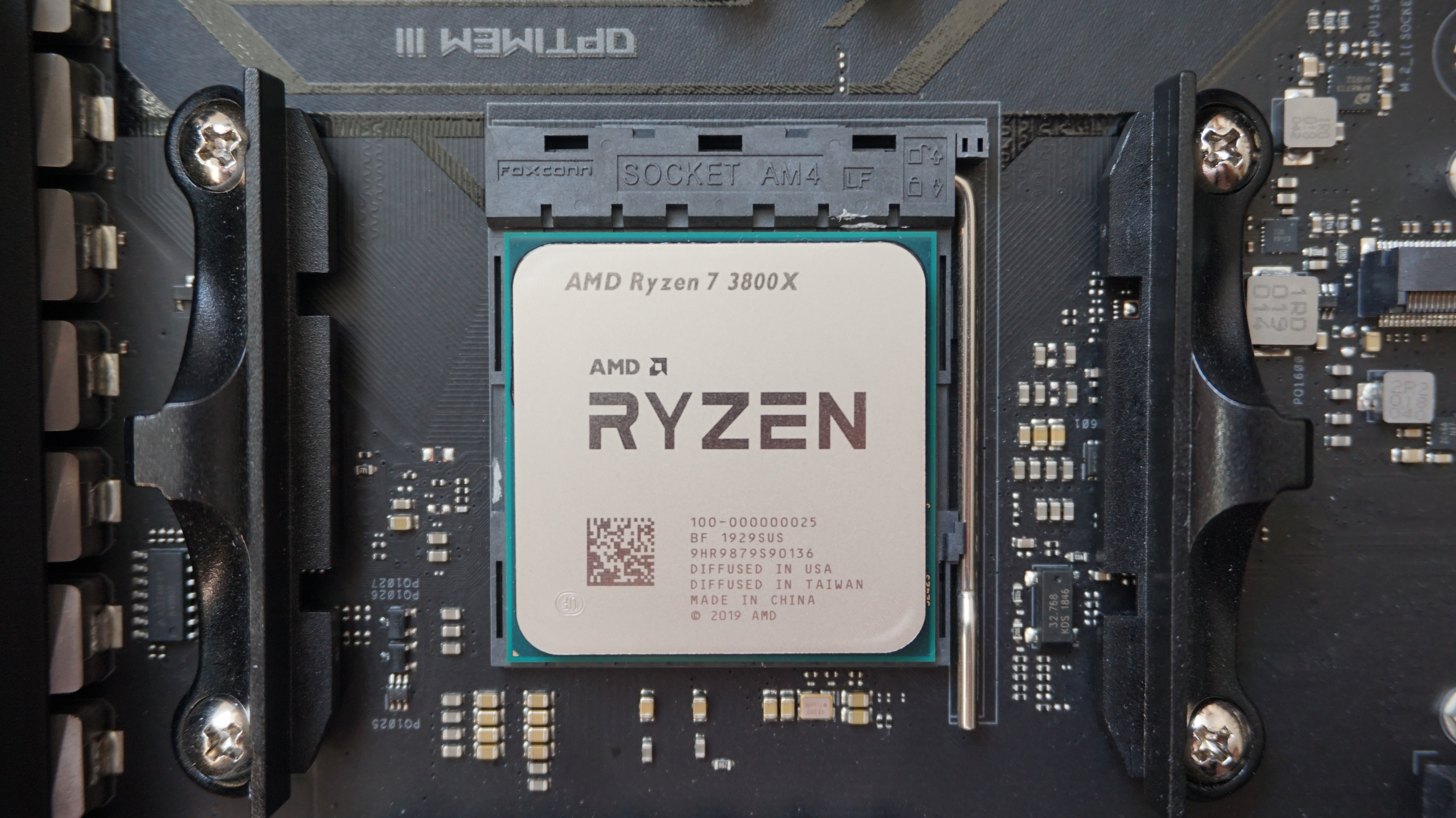 It does, however, have a high TDP (or thermal design point) of 105W as a result, though. This means it's less energy efficient than both the 3700X, which came in at a lean 65W TDP, and the Core i7-9700K, which is rated just below it at 95W. Indeed, I found the 9700K wasn't able to reach its top speed 4.9GHz with my bog standard tower cooler when I tried overclocking it, and I didn't see the 3800X get anywhere near its top 4.5GHz when I tested it with its bundled Wraith Prism cooler, either.

Now, I know there have been some issues recently with a lot of AMD's new Ryzen chips not reaching their advertised boost speeds, but even if I were to retest it alongside all the other Ryzen 3000 CPUs I've reviewed after AMD's latest motherboard BIOS patch, I don't think my opinion of it as a straight gaming CPU is likely to change. Indeed, when I put it through the same gaming benchmark suite as all the other CPUs I've tested, the 3800X produced almost nigh-on identical results to its cheaper and more energy efficient sibling, the 3700X.

Now, I should point out that getting a truly accurate picture of what your CPU's doing while playing games is still a pretty difficult task. After all, there are several other factors that can affect your PC's gaming performance, such as your graphics card, the type of RAM you’ve got, and even what type of storage you’ve installed the game on. There's also the additional problem that a lot of PC gaming benchmarks just don’t test your CPU properly.

Fortunately, a handful of benchmarks have been getting a lot better at this recently, with the likes of Shadow of the Tomb Raider, Forza Horizon 4, Assassin’s Creed Odyssey and more all providing an in-depth look at your CPU’s performance as well as what your graphics card’s doing. As a result, I’ve done the best I can with the equipment available to me, but you may want to read around a bit more to get a better picture of things. I've also only focused mainly on gaming performance in this review than I have on, say, application performance or media creation bits and bobs because, well, I’m not really interested in that. I’ve included some cursory Cinebench R20 results below to give us a rough idea of how each CPU stacks up for single and multicore desktop tasks, but really, my main goal here is to work out what CPU is the best for gaming and gaming alone. 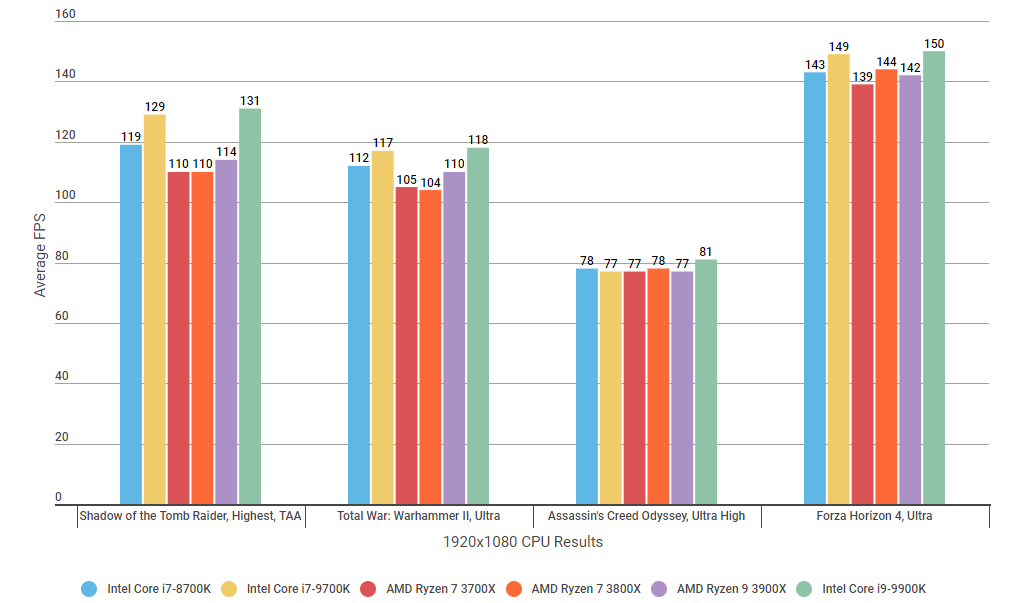 The 3800X managed to finally pull in front of the 3700X in Assassin's Creed Odyssey (albeit by just a single frame at both 1080p and 1440p), but it was the 3700X that had the edge in Total War: Warhammer II at 1080p. Again, these are all pretty miniscule differences in the grand scheme of things, but in terms of value for money, you'd have to have a very good reason for opting to buy the 3800X over the equally nippy 3700X.

(As for those rather high looking Forza Horizon 4 scores, I should point out that Nvidia have made specific optimisations to this particular game in recent months, which probably explains why both its 1080p and 1440p results are so much higher than literally everything else I've tested.) 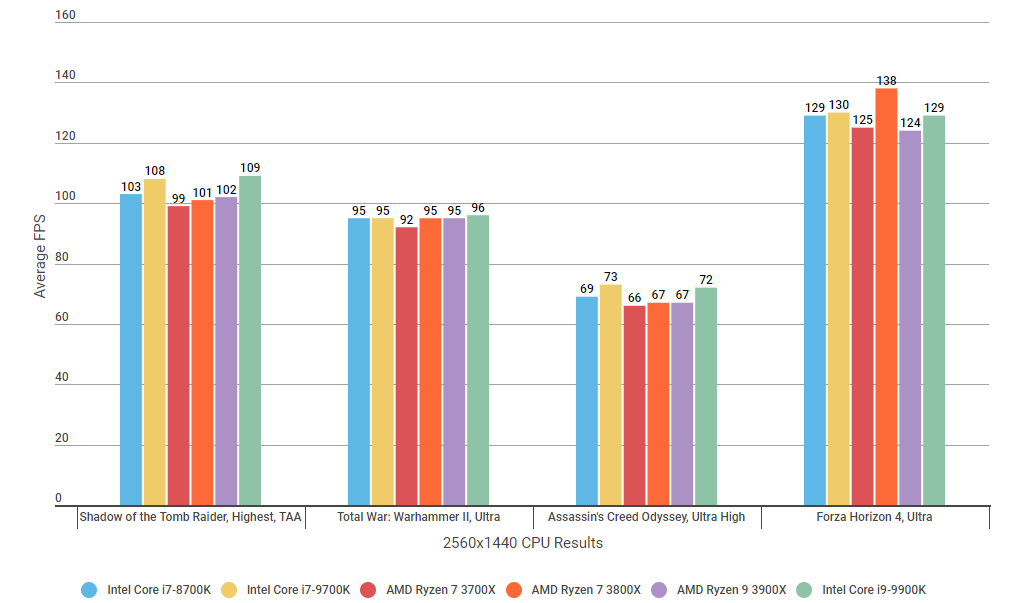 If you use your PC for more than just gaming, of course, then that very good reason will probably already be apparent - although even then I'm still not sure it's worth the extra expense. Take a look at its Cinebench R20 results, for example, and the 3800X comes in comfortably ahead of the 3700X when it comes to multicore tasks, which will no doubt be useful for anyone who uses their PC for high intensity tasks such as photo and video editing and the like. 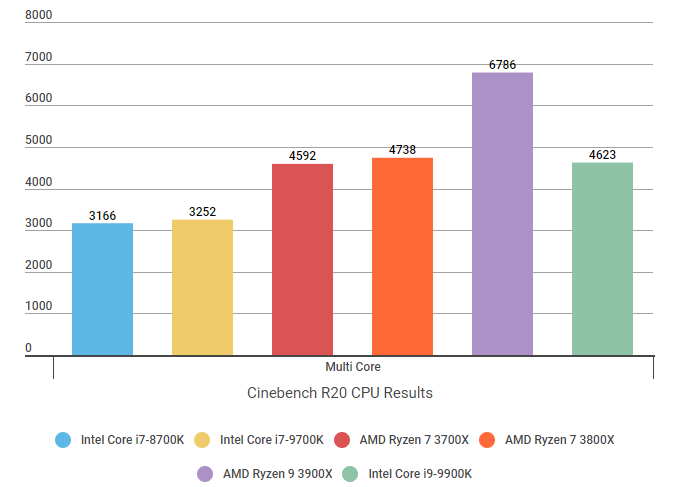 On the single core front, though? Well, no matter how many times I re-ran Cinebench to double-check this score, the 3800X repeatedly came in around 10 points slower than its 3700X sibling. Yes, you're probably not going to notice this in everyday use, but surely that's the whole point of paying for a more powerful processor, right? To feel that difference? 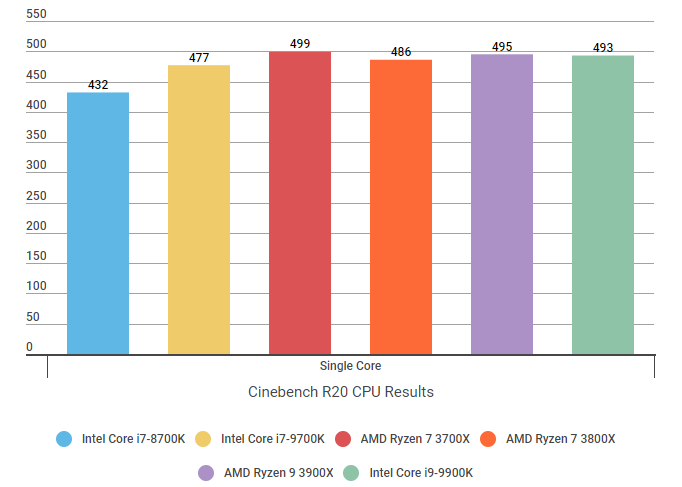 Overall, then, the Ryzen 7 3800X might look good on paper, but in practice it leaves a lot to be desired. Even with all that extra power and speed at its disposal, it still can't match Intel's Core i7-9700K as a pure gaming CPU, and it even struggles to keep up with its cheaper Ryzen 7 3700X sibling a lot of the time, too.