My friends, today I achieved the dream of dreams. I boldly went where no-one has gone before. I went behind American Truck Simulator's invisible wall. I saw the world that lay beyond the road. I saw views to take my breath away. I saw the land torn asunder. I saw the laws of physics collapse and invert. And then I met my doom.

American Truck Simulator is my all-time favourite driving game (and I am not, in general, someone who plays driving games), but, in the wake of its new and highly-recommended New Mexico DLC, it is, in my perception, in the middle of an existential crisis.

It has built - and is still building - an incredible amount of world, the detail of which is steadily on the rise, and as such tries to meet the twin objectives of being a somewhat realistic lorry-driving simulation and a dramatic touristic odyssey across a shrunken but still enormous America.

The trouble is, the more it builds and the better it looks, the more players like me - in it for the zen roadtrip experience rather than vehicular accuracy - want to explore and get up close to all these wonderful natural and man-made sights. Sadly, it is not (yet - hope springs eternal) designed to be that kind of game. It is designed to be a game in which you haul cargo along major roads. 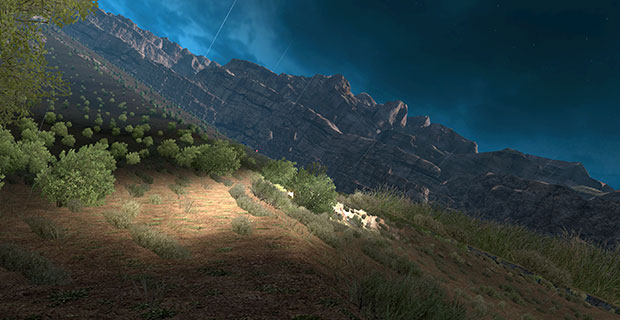 Until now, I've been relatively content with that, at least in part because the major landmarks of California, Nevada and Arizona (the states covered prior to New Mexico) were iconic enough and gigantic enough that seeing them from the side of the road pretty much did the job. New Mexico is different, in that it has fewer world-famous sights but, as its unofficial assignation 'the enchanted land' suggests, it is nonetheless peppered with wonderful things - it's just that little bit harder to find them.
That's what I've been doing, after reaction to my ATS New Mexico review suggested that the bleak, down-at-heel impression I'd gotten of the state was only halfway true. So I've been deliberately leaving the beaten track in search of its most recommended places, and documenting them in this photo diary (currently only available to RPS subscribers, but I'll be making it public once it's complete). 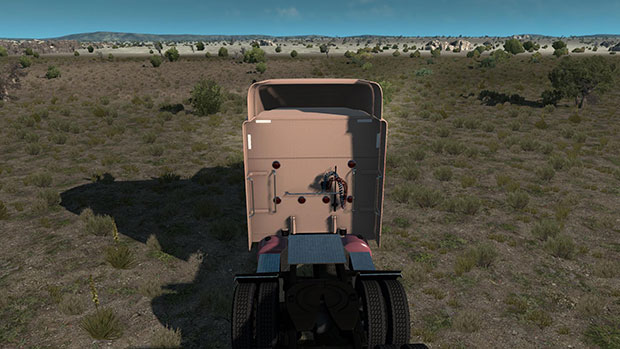 Most recently, I went in search of Los Alamos, birthplace of the Manhattan Project's first atomic bomb, and which for me was to be an entree before trying to locate the staging ground of the Trinity nuclear test in the Jornada del Muerto desert, which played a lynchpin (pun semi-intended) role in the most recent series of Twin Peaks.

I hit a snag. That snag being that Los Alamos exists in a sizeable section of New Mexico which ATS has not recreated. There's a vast expanse of land in the general direction of where it should be, but there are no roads through it. And, generally speaking, ATS will only allow you to drive where there are roads: go off-road and, within seconds, you'll hit impassable invisible walls. 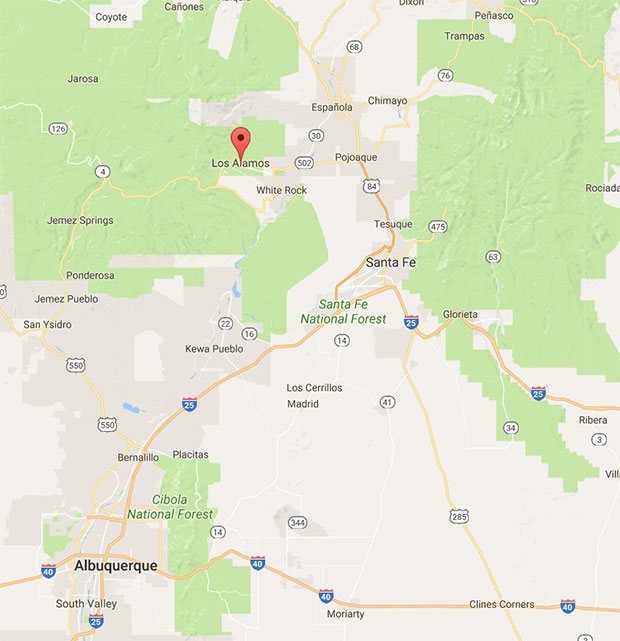 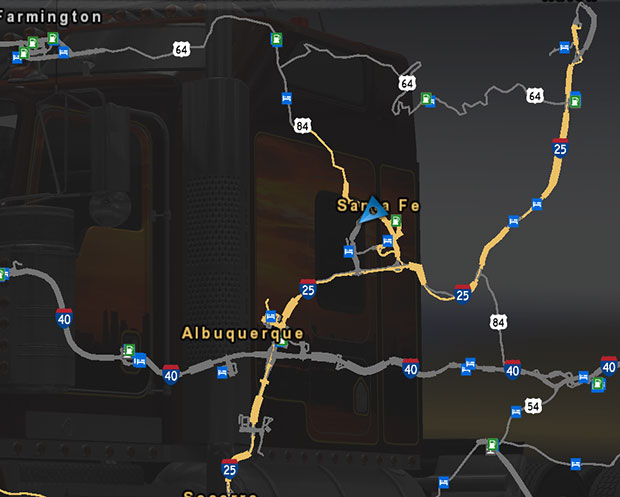 Tough luck me, in other words.

I spent some time driving up and down Route 84, hoping I might at least be able to glimpse Los Alamos in the far distance, but a whole lot of guesswork was involved. Far more problematically, the game prevented me from driving more than a couple of metres off the side of the road. A cat's cradle of invisible walls runs through the game for precisely this reason: to keep you on the road, to keep you seeing only what you're meant to see, and even to keep you from driving your truck into oblivion.

Close to giving up, I aimed for the highest point I could find, and drove through the nearest fence gap to at least gain the few inches I could, just in case a distant town popped into view.

It did not. But I kept on driving. And on and on. 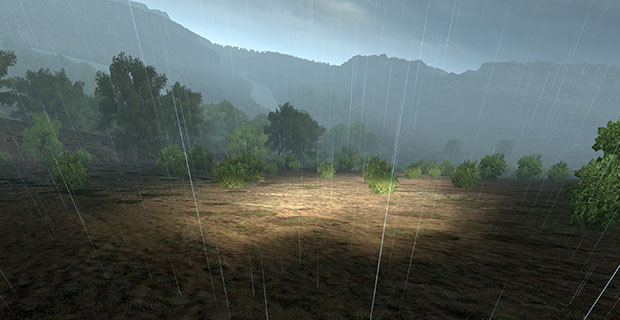 I braced myself for the familiar, sudden shudder of force-feedback and screen shake that would mean I had hit the wall once again, presuming I had just found myself in some layby missing its sign posts. It did not come. 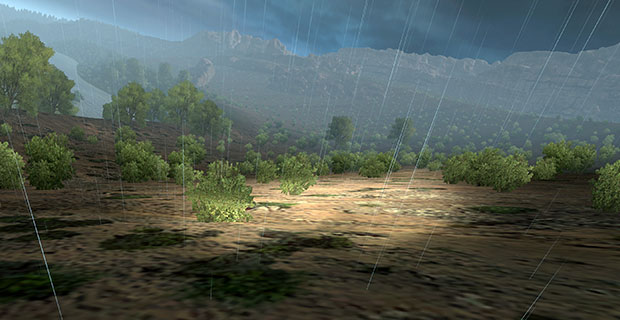 I was Jim Carrey at the end of The Truman Show, finding the secret door at the far edge of the world, the one that opened into the real world. I had done it. I had broken free.

This one place - this one place - that I had found quite by chance, some development oversight in a tiny section of the map, and it changed everything. The world - or, at least, the breathtakingly unspoilt interior of New Mexico - was mine. Most importantly, was there a Los Alamos out there somewhere? If I drove deep enough in, would this traffic-free ghost town await me?

That, I never did find out. I drove on towards the river - the Rio Grande, I believe, which I had previously only seen as a murky brown scar underneath a freeway, but here it was glittering and magnificent - only to encounter a second invisible wall along its perimeter. This, I have not found a way to pass. Not yet, but I shall persist.

In the meantime, what sights I did find. I saw great beauty... 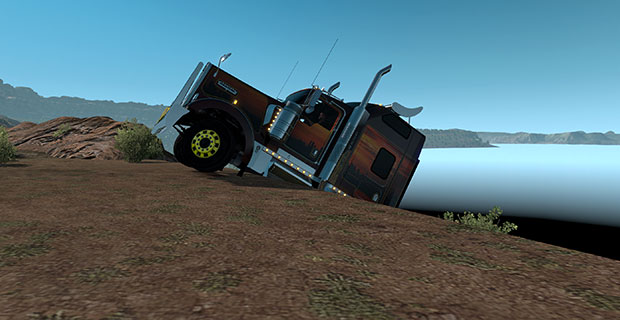 ...and I saw wild and weird impossibilities.

I drove across places no-one was meant to drive across..

...and I drove into barriers I could not see. So many times.

They were everywhere, always unexpected, always impassable. I gradually learned to recognise particular trees and rocks which marked a path through, and slowly a map drew itself in my mind. A map of my limited freedom.

It was the ride of my life, but for my truck, it was another story entirely. The fuel would only last so long, but more critically, the harsh terrain and regular collisions with unseen walls steadily inflicted deep damage upon it. I would have to retreat to ATS' intended world of highways and find a service station, repair the vehicle, fill the tank and then try again to cross the Rio Grande.

But I had crossed some Rubicon. I could not go back. Whatever parting the wall had made for me was now sealed up, or I could not find the very precise trajectory required to pass through it. I was stuck here, in New Mexico's own Upside-Down.

I tried and tried, but time and again that barrier, the barrier I was now on the other side of after so long yearning to be, would not let me though. Each collision doled out more damage, and before too long, my engine failed and would start no more.

I sat in the cab, watching the sun rise and the sun set. I would die here, in this beautiful world I was never meant to be this close to. I had achieved wonderful, impossible things: I had escaped The Road and found freedom, but the cost was my life.

Another night fell. I waited for the cold to take me.

Then I remembered that I could just press F7 to call roadside assistance. So hey-ho, we're back in Santa Fe.

With the truck repaired, I immediately hit Route 84 again, breathlessly returned to the scene of my crossing-over. I crawled and ground across every millimeter of the same roadside, but this time it would not yield. I had had my one chance. I had seen the face of God, I had chosen to live rather than die* and then I had been sent home. Only The Road Now. Farewell, Los Alamos, wherever you may really be.

I have a savegame, you know. A snapshot of my time on The Other Side. I'm going back. If you never hear from me again, know that I am happy.

* I know there is no death in ATS, but allow me a little a poetry, eh?