Nvidia G-Sync monitors already cost an arm and a leg more than regular gaming monitors, but bump the resolution up to 2560x1440 and throw in a curved panel with a 165Hz refresh rate and you're looking at spending an arm and a leg plus both of your kidneys. All right, so £649 / $650 for AOC's new Agon AG273QCG isn't quite as bad as, say, forking out two grand plus on Asus or Acer's Nvidia G-Sync HDR monitors, but it's still a sizeable amount of money where 'simply okay' doesn't cut it. At this price, you want perfection, which leaves the AG273QCG in a slightly precarious position. Here's wot I think.

First things first, I absolutely adore the design of this monitor. I know I've said before that I'm a sucker for anything red (it is, after all, the greatest colour of all time), but golly just look at that gorgeous scarlet red base. What a beaut. Even the little makeshift carry handle at the top of its height-adjustable stand is coated in the stuff! Yes. Please.

Sure, I could probably do without the RGB lightshow going on round the back of the monitor, and probably could have done with another little hollowed out nook down the bottom to keep my cables nice and tidy, but what can you do? If I could stick it on my best gaming monitor list for its looks alone, I would. I know, I know, black and red is a bit of a PC gaming cliche these days, but for me, the AG273QCG can come and hang out on my desk any day of the week. 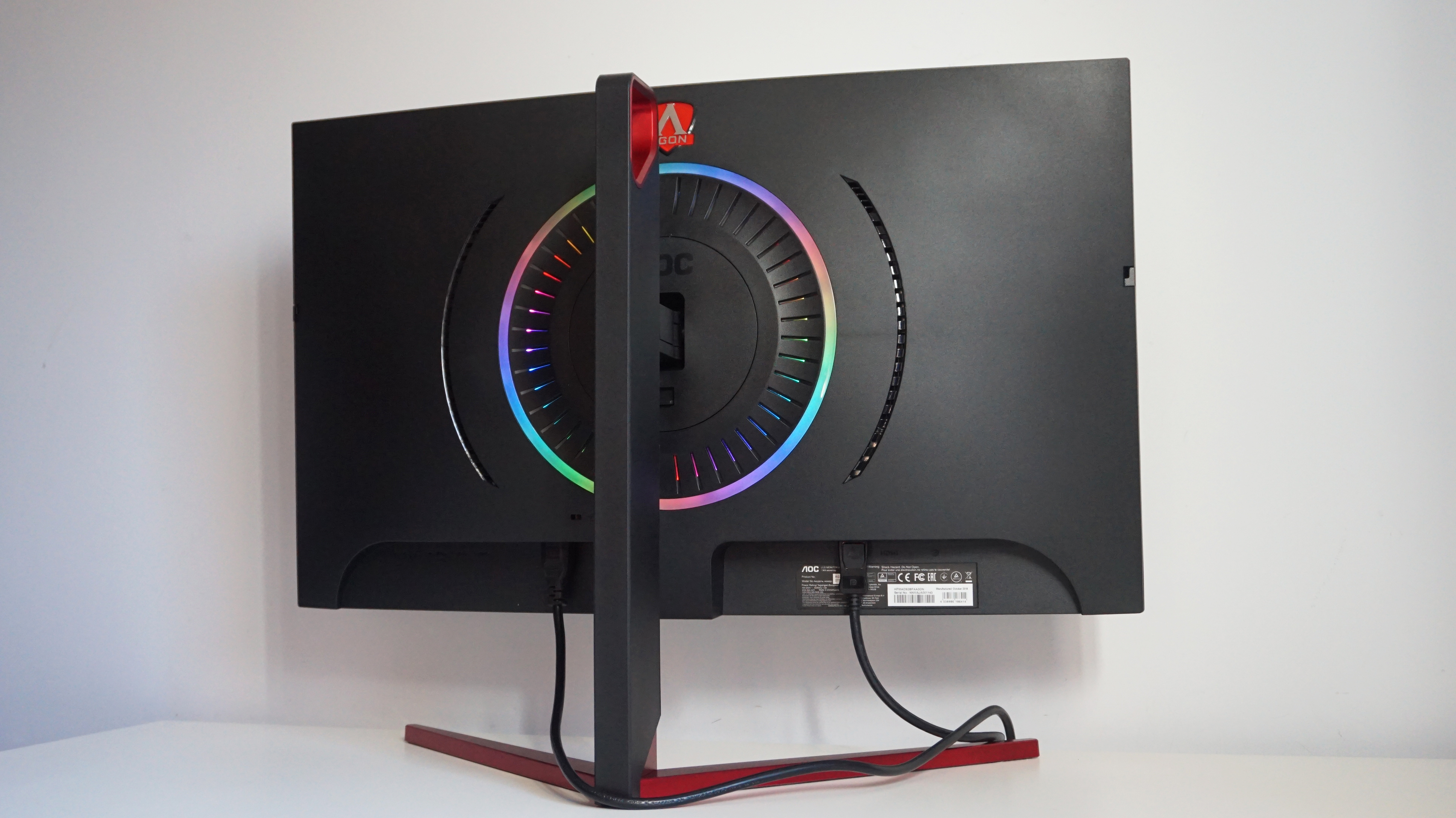 Alas, a nice red stand does not a best gaming monitor make. There's also the usual stuff to take into account like colour accuracy, brightness and contrast, as well as port selection and whether its extra features - which in the AG273QCG's case extends to its Nvidia G-Sync support and 165Hz refresh rate - are really worth all that extra cash. And for the most part, the AOC AG273QCG makes a pretty good case for itself.

Needless to say, you'll need a fairly hefty graphics card to take advantage of that 165Hz refresh rate (which is only available over its DisplayPort 1.2 input, I might add - using the HDMI 1.4 input will limit you to the regular 60Hz), especially at its native resolution of 2560x1440. I mean, even my 6GB Nvidia GeForce GTX 1060 struggled to get much higher than 120fps in the exceptionally well-optimised Doom when I loaded it up on the AG273QCG, and that was on Medium quality settings at 1920x1080. At 1440p on Medium, it was more like 100fps, so you'll probably need to own something with a bit more grunt to really get your money's worth here.

As I said in my Alienware AW2518H review, though, an easy way to check whether your graphics card is capable of spitting out 165fps is to use a frame rate counter. Steam and many other launchers have one built-in, so it might be worth having a play around with the settings on some of your favourite games to see how high you can push it before spending loads of money on a monitor you can't make full use of.

Then there's the AG273QCG's Nvidia G-Sync support, the primary aim of which is to help eliminate screen tearing regardless of how many frames your graphics card is churning out at any given moment. It does this by dynamically adjusting your monitor's refresh rate to match said frame churn, keeping things nice and smooth and stutter free regardless of whether you're hitting the full 165fps or noodling around 30fps.

Of course, ever since Nvidia opened up their G-Sync standard to work on cheaper AMD FreeSync screens (albeit in a watered-down version whose quality wildly depends on the specific type of screen you're using), full-fat G-Sync screens are no longer quite as special as they once were. Indeed, when you can still just about snag Acer's XG270HU monitor for under $400, which also has a 2560x1440 resolution and a 144Hz refresh rate and is one of the select few FreeSync screens to pass Nvidia's own G-Sync Compatible tests (which means it can deliver the best G-Sync experience possible on an AMD FreeSync display), £650 / $650 monitors such as AOC's AG273QCG have to work extra hard to justify their extra cost.

There are still a couple of things G-Sync screens offer that aren't available on G-Sync Compatible ones, though. This includes super low input lag over DisplayPort, ensuring the minimal amount of delay between your keyboard inputs and what's happening onscreen, and Ultra Low Motion Blur, which helps keeps things looking nice and sharp, particularly at higher refresh rates when fast-moving games can sometimes get a little smeary when you're zipping the camera back and forth in quick succession.

My big problem with the AG273QCG, however, is that it has the same visible grain effect as their G2590PX monitor, which, to my eyes, just makes everything look a bit hazy right from the off. I'll admit I didn't notice it quite so much when I was Super Shotgun-ing Doom demons in the face, for example, but let the camera rest for just a second and it quickly comes bubbling back to the surface again, spoiling the view of whatever's onscreen. It's particularly visible over on the desktop, too, and there were multiple times when I felt I couldn't focus on the text or images in front of me because the screen just looked too fuzzy.

It's a real shame, as the panel itself is actually pretty good when it comes to overall colour accuracy. Provided you keep its various gaming modes turned off (which only make the screen look even worse, in my opinion), my X-Rite i1 DisplayPro calibrator showed it was displaying 94.3% of the standard sRGB colour gamut out of the box on its default Warm colour temperature setting, which is excellent considering it's only got a TN panel to its name. What's more, I was even able to push its sRGB coverage a fraction higher to 95.5% when I switched over to its User colour temperature profile and knocked the Green value down a couple of pegs.

Brightness was good, too, reaching as high as 460cd/m2 on its maximum setting. That's more than you'll ever need in daily use, but it's always good to have the extra leeway in case you happen to sit next to a very bright sunny window. The only downside to having a high brightness level is the knock-on effect this has on the monitor's black levels, which sat around 0.60cd/m2 according to my DisplayPro. This is still all right as TN panels go, but ideally I would have liked it to have been a fraction lower (say, 0.40cd/m2, as the closer you're able to get to 0.00cd/m2, the better, really) to make it more competitive against other G-Sync monitors such as the Acer Predator XB241H.

I also wasn't massively impressed with its contrast ratio of 782:1, either. Again, this is largely fine, as I was still able to see plenty of detail in dark scenes and games with a lot of shadow areas. But even after fiddling with its gamma and contrast settings for a bit, the best I could manage still only amounted to 812:1, which is pretty underwhelming for such an expensive monitor.

Combine that with the grainy finish I mentioned earlier, and the AOC Agon AG273QCG just has too many niggles to really recommend at this kind of price. As much as I love the monitor's overall design, its panel remains a constant disappointment, dashing every last shred of affection I have for it every time I turn it on. I wish it was better, but when the 27in, 2560x1440 version of the excellent Acer Predator XB241H can still be had for around £30 / $50 less than the AOC, there's just no competition. If you're in the market for a 1440p monitor with a high refresh rate, the Acer is still the way to go.