Ever since Nvidia announced they were opening up their G-Sync certification process to include a cut-down version of their variable refresh rate tech for AMD FreeSync screens at the beginning of the year, it's left proper, full-fat G-Sync gaming monitors such as Alienware's AW2518H in a slightly precarious position. After all, when G-Sync monitors often cost so much more than their FreeSync competition, why would you shell out the extra cash when you can get an almost identical experience for a lot less?

It's a bit more complicated than that, of course. For starters, Nvidia have only deemed 15 out of over 400 FreeSync screens to be worthy of their official G-Sync Compatible monitors list after conducting their own internal tests on them, but technically any FreeSync monitor can now take advantage of Nvidia's cut-down G-Sync tech once you've enabled it in your Nvidia control panel. The experience might not be particularly great, all told (it varies from monitor to monitor), but the fact remains that ye olde G-Sync displays now have to work a lot harder to justify their higher cost. Fortunately, the Alienware AW2518H makes a pretty strong case for itself with its superb image quality and whopping 240Hz refresh rate.

Before we begin, though, here's a quick reminder of what G-Sync monitor actually does, and how it differs from one that's merely G-Sync Compatible. At its heart, G-Sync is Nvidia's variable refresh rate tech, which automatically matches your monitor's refresh rate to the number of frames being spat out by your graphics card. This helps to eliminate screen tearing (what happens when your screen can't keep up with your GPU), and it also helps reduce other visual defects such as stuttering, flickering and ghosting. Essentially, it's about helping your games look their absolute best and delivering the smoothest possible experience.

Nvidia's approved G-Sync Compatible screens can do this as well, albeit in a slightly smaller refresh rate range than full-fat G-Sync monitors. Whereas proper G-Sync screens offer this kind of technology right down from 1fps, the baseline for G-Sync Compatible screens tends to be much higher - around 30-48fps, depending on the model and its original AMD FreeSync range.

Full-fat G-Sync screens also offer low input lag over DisplayPort, which helps to keep any delay between your mouse and keyboard actions to a minimum, as well as something called Ultra Low Motion Blur, which helps to make everything look that much sharper even when you're whizzing around at high frame rates such as 240fps. These extra bits aren't available on G-Sync Compatible screens, so there's still some merit in going for a full-fat G-Sync screen if you want the absolute bestest best speeds and most responsive experience possible when playing games.

And as full-fat G-Sync screens go, the Alienware AW2518H is one of the most fully-featured gaming monitors around - and that's chiefly thanks to its top-dollar refresh rate of 240Hz. That's as high as it gets on gaming monitors at the moment, but this, coupled with its slightly larger 25in 1920x1080 TN panel, does come at a cost.

Priced at £500 / $500 at time of writing, the AW2518H is quite a bit more expensive than my current best gaming monitor G-Sync favourite, the Acer Predator XB241H. This monitor only has a maximum refresh rate of 144Hz (or 180Hz when 'overclocked' in its onboard menu system), but costs a much more palatable £400 in the UK and just $350 in the US, which puts quite the extra premium that extra 60Hz offered by the Alienware.

There's also the fact that you will need a reasonably powerful graphics card to make full use of that extra 60Hz in order to make it worth the extra £100 / $150 over the 180Hz Acer - particularly if your gaming library is largely populated by big, graphics-heavy blockbusters. But if less-demanding fast-paced shooters are more your thing, such as Apelegs, Fortnite and Doom and the like, then I reckon you should still be able to get into the 200fps region with the right settings.

One way of checking what your current graphics card is capable of before you buy is to try using a frame rate counter. Steam and many other platforms have one built-in somewhere in their settings menus, so as long as you switch off V-Sync, which caps your monitor's refresh rate at whatever its maximum is, that should be able to tell you to see how high you can push it. If you're not getting above 180fps, then I'd say there's not really much need to spend all that extra money on the AW2518H over the Acer. You could argue that opting for a 240Hz monitor will give you more leeway in the future when you next come to upgrade your graphics card, but this very much depends on where your PC currents sits on the old upgrade cycle.

The AW2518H would be a lot more tempting if its overall image quality was significantly better than the Acer, but my calibration tests showed they were pretty much on equal footing here. That's largely because another part of the G-Sync certification process involves having every panel being approved by Nvidia themselves so they can guarantee the same quality experience across every single G-Sync screen.

Indeed, just like the Acer, my X-Rite i1 DisplayPro calibrator showed the AW2418H was capable of covering 95.7% of the standard sRGB colour gamut pretty much straight out of the box on its Standard image preset, which is pretty damn high considering it only has a TN panel. These types of panels tend to be better known for their fast response times than their colour accuracy, but the AW2518H - like the Acer - is one of the few exceptions to the rule.

There are plenty of other game-specific image presets to choose from as well, such as FPS, RTS, RPG as well as three customisable game modes, but a lot of these look pretty wonky in the old colour department. If you want the best picture quality, stick to Standard.

I was also pleased to see the AW2518H's black levels were a decent 0.37cd/m2 (the closer to 0.00cd/m2, the better), putting it once again pretty much on par with the Acer's 0.34cd/m2, and that it had a high peak brightness of around 405cd/m2, giving you just a fraction more leeway than the Acer's 385cd/m2 peak brightness if you happen to be sitting in a particularly bright room or right next to a sunlit window. Not that I'd recommend keeping it at that kind of intensity for long gaming periods, as you'll almost certainly strain your eyes staring at something that bright for hours on end.

The only area where the Acer had the upper hand was its contrast ratio. Whereas I measured a perfectly acceptable 917:1 for the AW2518H, Acer's XB241H managed 1117:1. I mean, I doubt you'll really be able to see much of a difference in practice, but it still makes the Acer better value for money in my eyes if you're so fussed about having a 240Hz refresh rate. 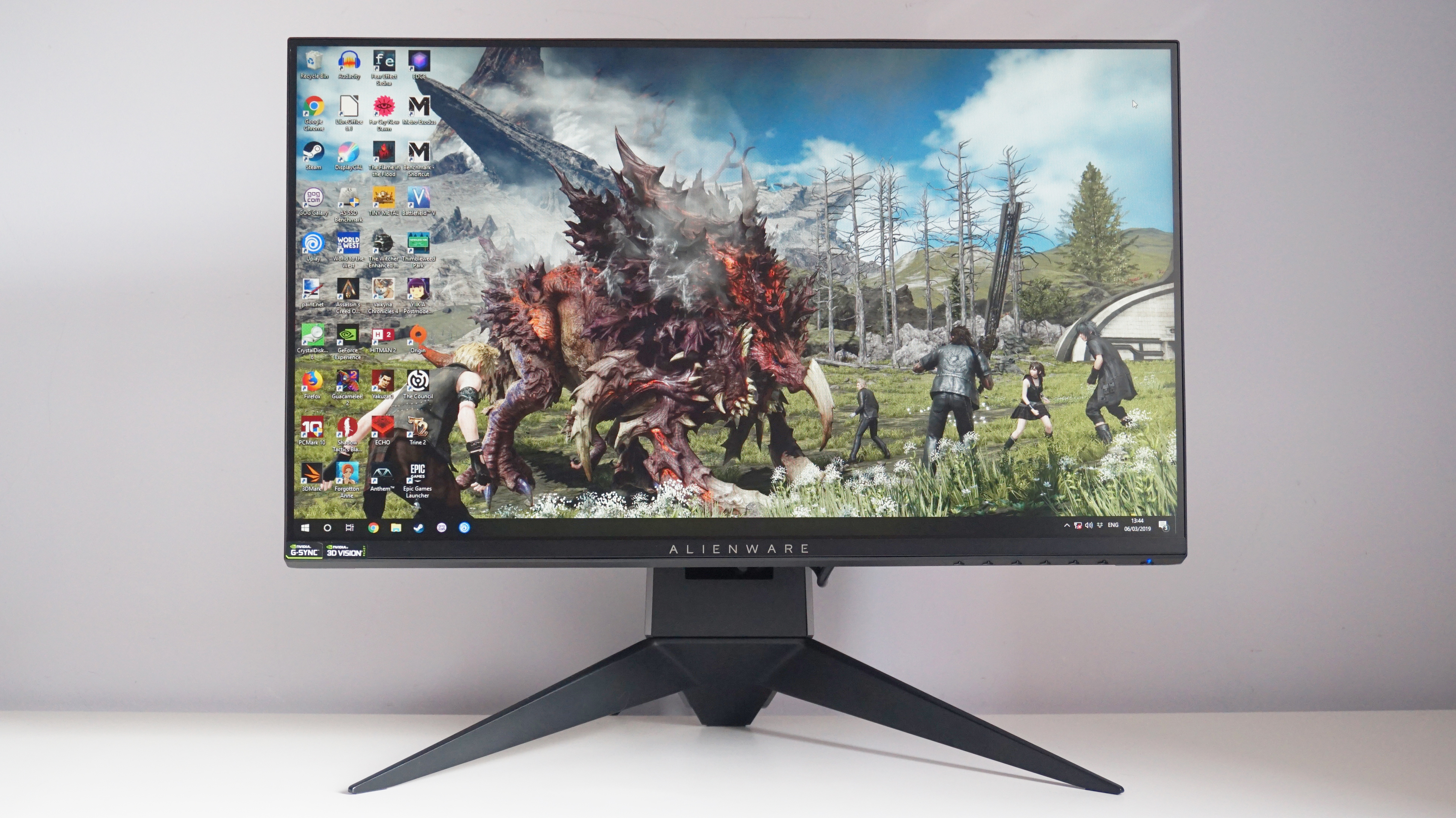 That said, the AW2518H does come with a slightly wider range of ports than the Acer, which may be enough to swing it back in its favour depending on how many devices you're planning to plug into it. You'll still only find single HDMI and DisplayPort inputs here, plus the usual headphone jack and audio line out, but you do get a four-port USB 3 hub (one of which also has power charging capabilities), allowing you to plug all your peripherals into the monitor instead of your PC, such as your mouse, keyboard and USB headset.

There's no denying the AW2518H is a very fine gaming monitor, but unless you've already got the PC to take advantage of its 240Hz refresh rate (or are planning an imminent upgrade), then you may as well save yourself some cash and get the equally excellent-looking Acer Predator XB241H instead.

After all, the Acer's maximum refresh rate of 180Hz is still pretty damn high, all things considered, and its slightly smaller 24in screen will also make everything look just a touch sharper than the 25in Alienware thanks to its ever so slightly higher pixel density. The AW2518H is still a great shout if you want a G-Sync monitor with a USB hub and are planning on upgrading your graphics card soon to make use of that extra 60Hz, but those after the best value for money full-fat G-Sync experience will do just as well with our best gaming monitor champ, the £400 / $350 Acer Predator XB241H - and if you really don't care about G-Sync at all, then you can spend even less money and get the brilliant 144Hz AOC G2460PF, which is just £210 / $200.