If you've been thinking about upgrading to a 4K gaming monitor recently, then the good news is that you needn't spend upwards of £2500 / $2500 on something like the Asus ROG Swift PG27UQ or Acer Predator X27 to get one that's halfway decent. Indeed, you can happily shave off one of those zeroes and get the brilliant value for money BenQ EL2870U, or even the AOC U2879VF for less than 300 quid. AOC's G2868PQU is another such budget 4K monitor, but this time you're looking at paying just under £400 at time of writing (US pricing TBC). Is it worth spending the extra cash over the BenQ and its cheaper AOC sibling? Here's wot I think.

On paper, the G2868PQU doesn't get off to the best start when it comes to worming its way into our best gaming monitor rankings. Cast an eye over the its specs, for example, and you'll find they're eerily similar to those of AOC's U2879VF. 4K resolution? Check. 60Hz refresh rate? Check. AMD FreeSync support? Check. TN panel? Check and check. The main difference here is that the G2868PQU is described as 'HDR ready', although at no point does AOC say on their website what that actually means.

It's certainly not HDR-ready in the old brightness department, as I only ever measured an absolute maximum of 320cd/m2. That's still more than enough for everyday use, mind, but even VESA's lowest industry-wide DisplayHDR certificate requires a peak brightness of at least 400cd/m2.

The G2868PQU's 28in TN panel also doesn't hit VESA's DisplayHDR 400 colour gamut standard, either. AOC might say it can hit 102% of the standard sRGB colour gamut on their specs sheet, but I only ever measured a high of 93.5% sRGB coverage, which once again falls short of VESA's requirement of at least 95% coverage. 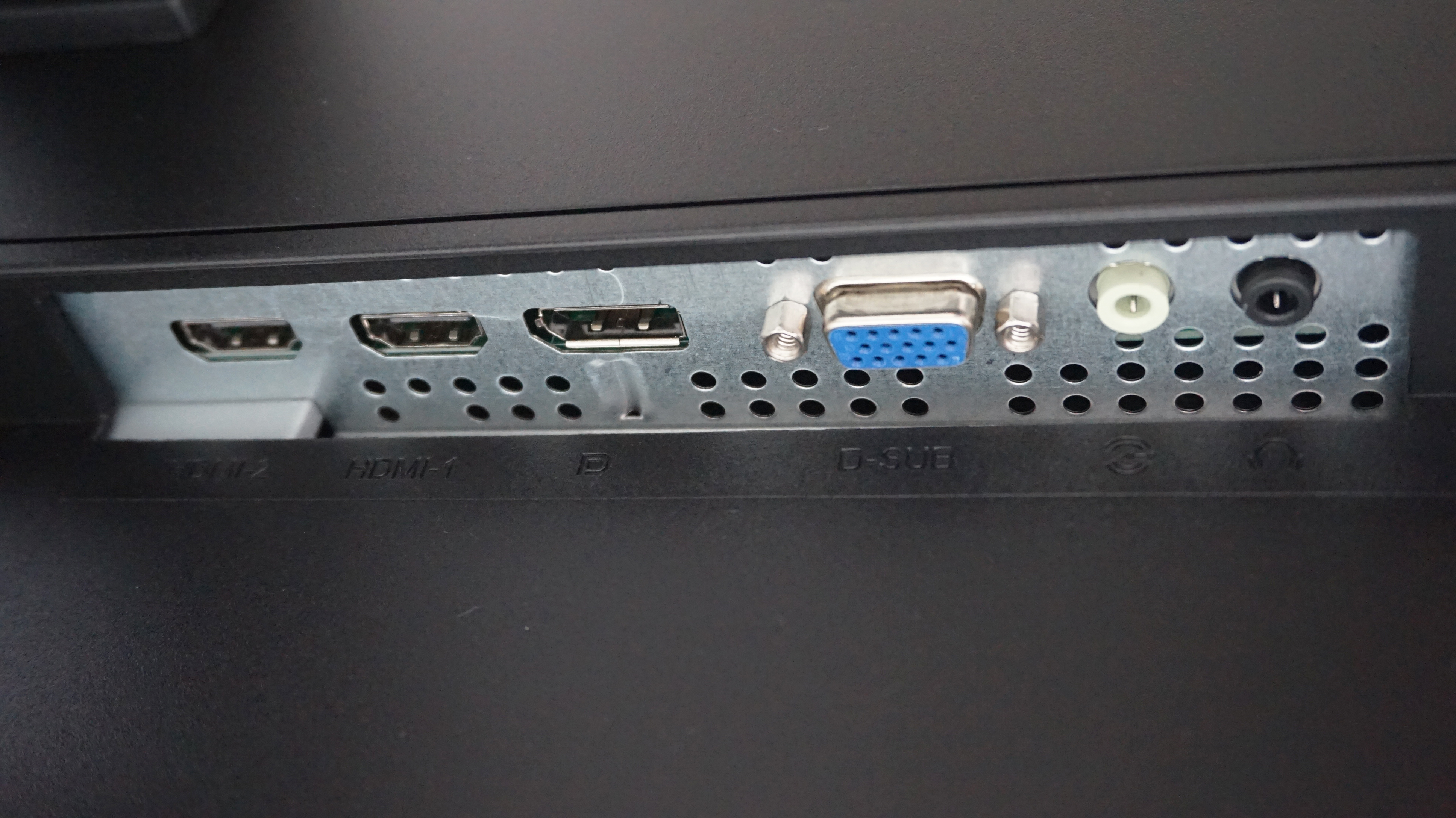 Thankfully, this isn't the only thing that supposedly sets the G2868PQU apart from its U2879VF sibling. Whereas the U2879VF has a fixed stand and only a small selection of ports, the G2868PQU has a height-adjustable stand and a much wider selection of ports, including the very welcome addition of a four-port USB 3.1 hub. This is probably a large part of why the G2868PQU is another £100 over the U2879VF, as their overall colour accuracy (HDR nonsense aside) is largely identical. 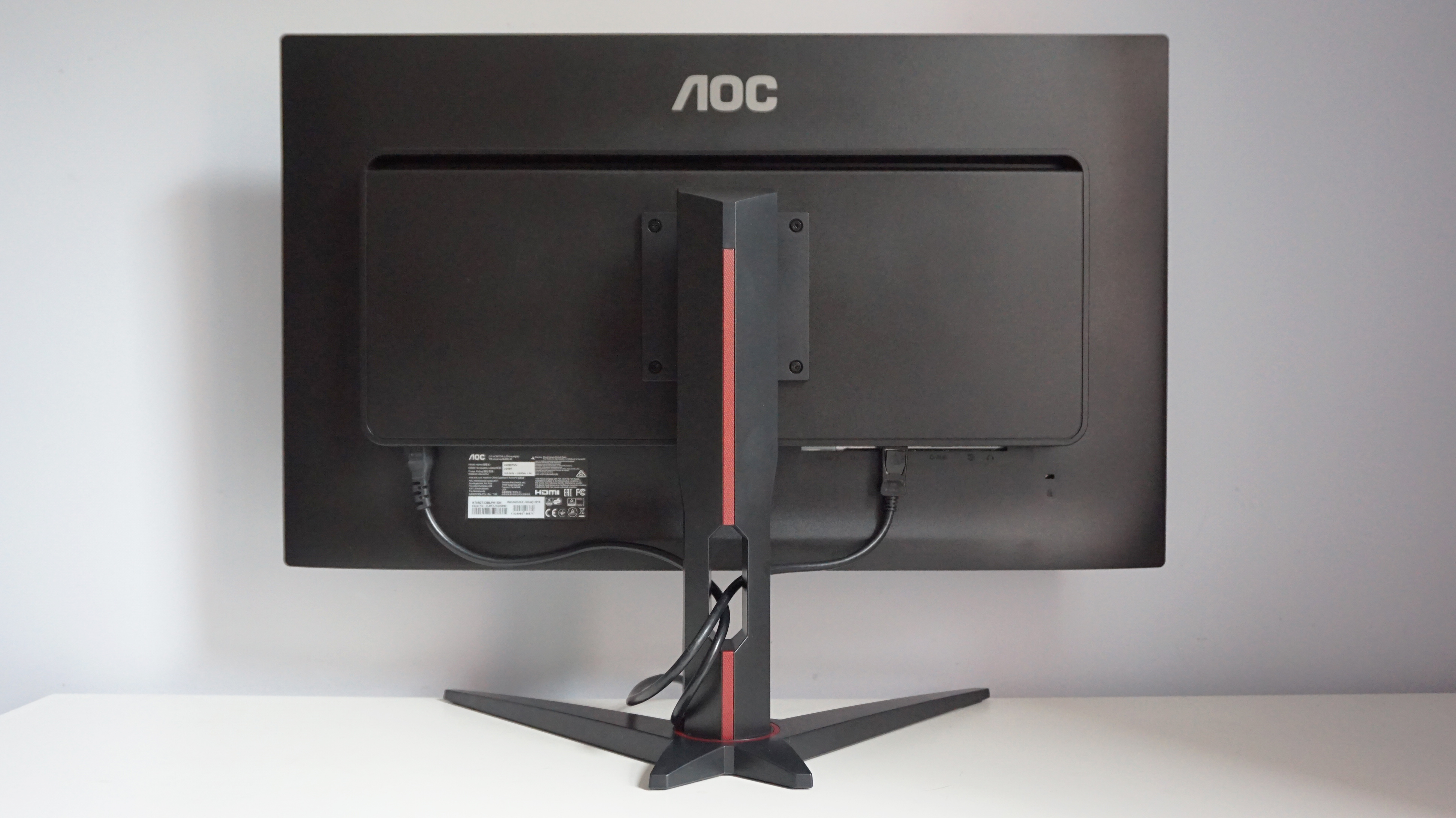 Straight out of the box, for example, my X-Rite i1 DisplayPro calibrator showed the G2868PQU was displaying 91.9% of the sRGB colour gamut on its Standard Eco setting and Warm colour temperature profile, which is only slightly up from the U2879VFs's 88% with the same settings.

I was able to bump it up a bit higher, too, by switching over to the monitor's User colour temperature setting. I got the aforementioned 93.5% figure by tweaking its RGB values slightly and dropping the G2868PQU's Shadow Control setting down to 40 (which artificially brightens the screen to supposedly give gamers the edge in FPS games), but that also gave me a very low contrast ratio of just 573:1 and a maximum brightness of just 188cd/m2.

Instead, I'd recommend leaving the Shadow Control on its default of 50, as while this only produced an sRGB coverage of 92.2%, you'll get a much better contrast ratio of 850:1 and a higher peak brightness of 285cd/m2. Admittedly, 0.3% is a pretty piddly improvement in the grand scheme of things, but that's still a reasonably decent result compared to your typical TN screen. These often have the worst colour accuracy out of all the different panel types, so to get anything over 90% for an sRGB score is always a welcome surprise. 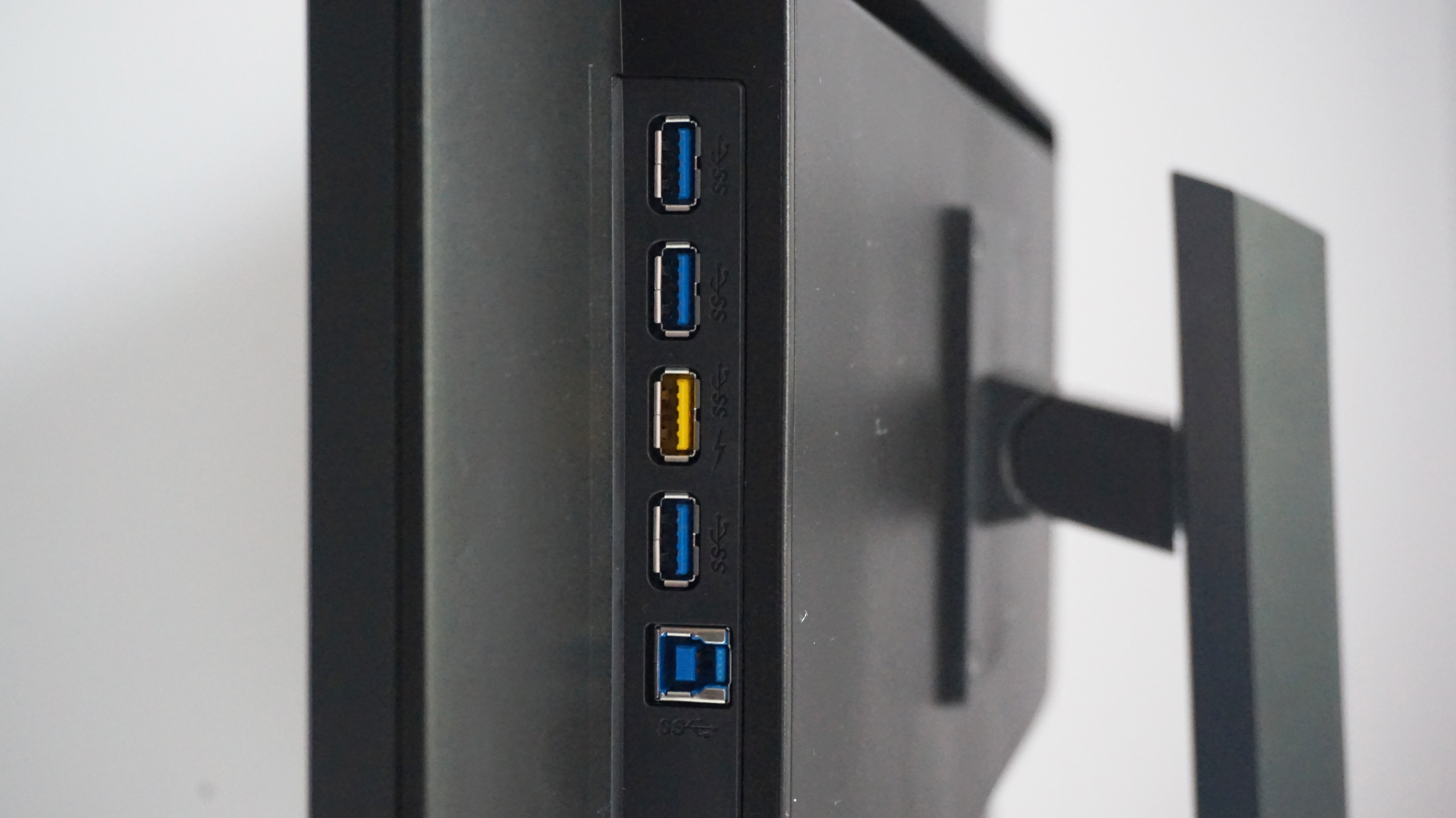 It's still not amazing, though, and I do worry about the uniformity of the G2868PQU's backlight as well, as even while I was typing up this review in Google Docs there seemed to be parts of the screen that were brighter than others. It wasn't that obvious while playing games, admittedly, but for general desktop duties it was really quite noticeable even when I was looking at the monitor straight on. It may have just been a result of the monitor's rather narrow viewing angles, of course (which is another thing TN panels generally aren't very good at), but it was a constant niggle nevertheless.

That said, I was impressed by how well its AMD FreeSync support coped with being turned into an Nvidia G-Sync monitor for a bit. As you may recall, Nvidia released a display driver not that long ago that effectively gives all AMD FreeSync monitors a bit of that old G-Sync magic so Nvidia graphics card owners can still take advantage of the monitor's variable refresh rate. Only the very best FreeSync monitors have managed to earn themselves Nvidia's official G-Sync Compatible badge, but AOC's G2868PQU still does a pretty good job with it. I didn't see any blinking or pulsing or other weird defects that can sometimes happen when G-Sync is enabled on a FreeSync monitor, and for the most part everything looked lovely and smooth, just like you'd expect (albeit only in the region of 40-60fps, as that's the monitor's original FreeSync range).

There's also a low blue light mode for when your eyes get tired, and a Game Colour mode for punching up the colours a bit. Just don't try opting for one of the G2868PQU's six gaming profiles (FPS, RTS, Racing and three ever so slightly more customisable Gamer modes), as not only do all of these have terrible image quality, but they also lock off a lot of the other onboard menu settings. 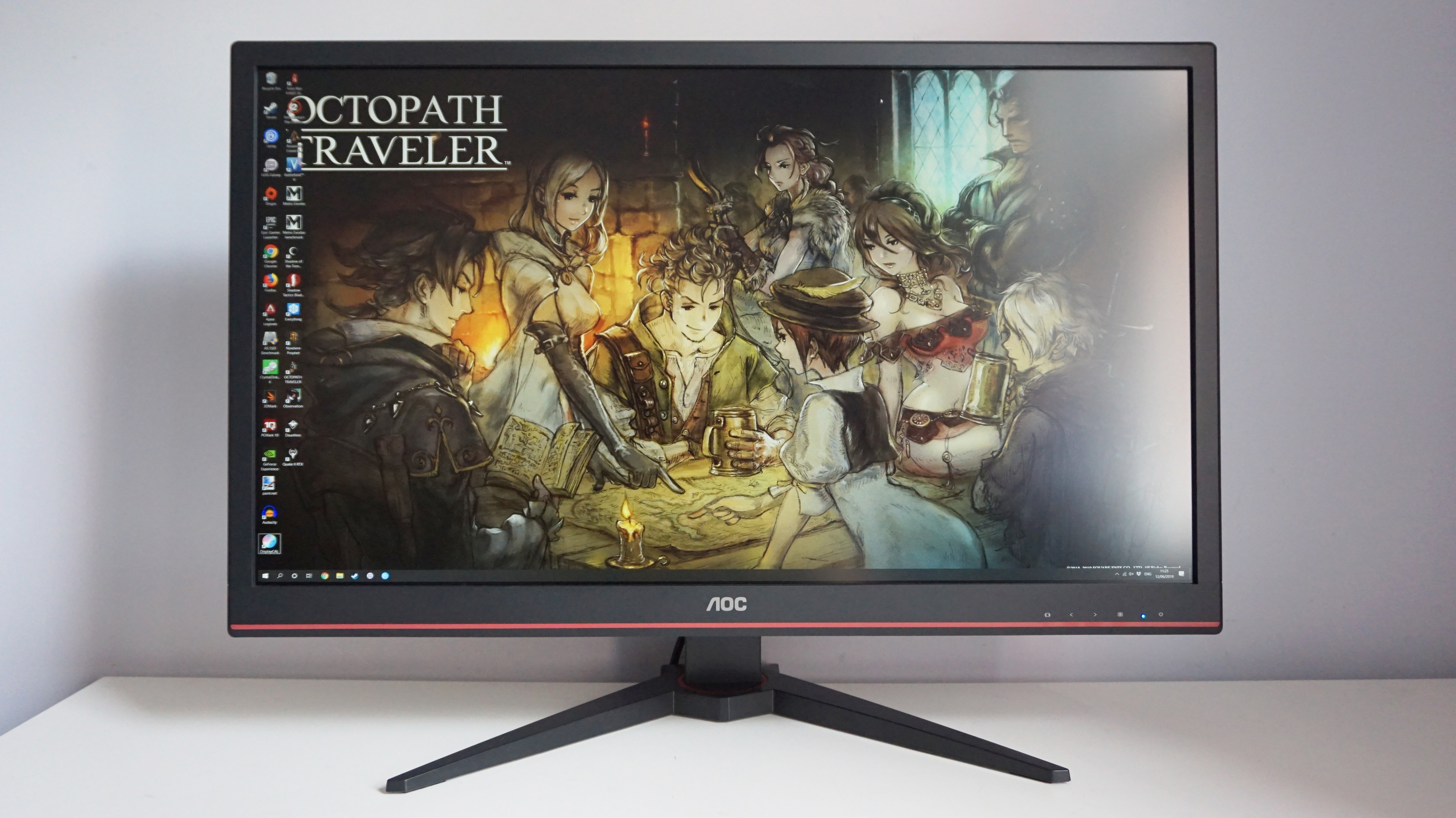 The real problem is the fact the BenQ EL2870U still exists, as this monitor's TN panel is just as accurate as the G2868PQU, and it does proper HDR (albeit still in a somewhat limited capacity) that you don't immediately want to turn straight back off again. It also doesn't have any of the G2868PQU's worrying uniformity or viewing angle problems, but equally it also doesn't have a height-adjustable stand or a particularly wide selection of ports.

That might be enough to sway it in the G2868PQU's favour for some people out there, but in truth it still feels like a bit of a compromise. If you're really set on that height-adjustable stand and greater number of ports, then you'd probably be much better off spending a bit more on something like the £520 / $433 Dell U2718Q than settle for the AOC. At just over £100 more than the G2868PQU, this is the regular 4K monitor I use for work and its height-adjustable IPS screen has much deeper, richer colours than the G2868PQU, plus it's got much smaller, more elegant bezels as well. It's a much better investment than the AOC in my books, and a much more worthy upgrade over the BenQ EL2870U, too. The latter is still a great buy for those on a budget and don't mind the fact that it has a fixed stand, but if it's a height-adjustable 4K monitor you're after, do yourself a favour and save up for the Dell instead.