Apex Legends kicks off its first cosmetic-driven season tomorrow - Wild Frontier. Players of Respawn's overnight battle royale hit can plonk down 950 Apex Coins (1000 is roughly $10) on the game's first Battle Pass, offering a linear chain of 100 cosmetic rewards to earn through play over the coming months. Those who can't wait for fashion can plonk down 2800 coins to skip straight to level 25, unlocking your first pile of dress-up goodies. The launch of the season is accompanied by the debut of new champion Octane, who had previously been partially unveiled by data-miners.

New Legend Octavio "Octane" Silva likes to go fast. So much so that he blew his fragile human (ape?) legs off during one particularly death-defying race and had them replaced by less explodable robot legs. His abilities are all about going fast and keeping up pressure. Unlike other champions, his health slowly recharges when he's not taking damage, and his active Adrenaline Junkie ability trades 10% of his health for six seconds of extra speed and slowdown immunity. His ultimate is to deploy a bounce pad that his whole squad can use to launch to new heights. So, part Bangalore, part Pathfinder, minus the good looks of either. 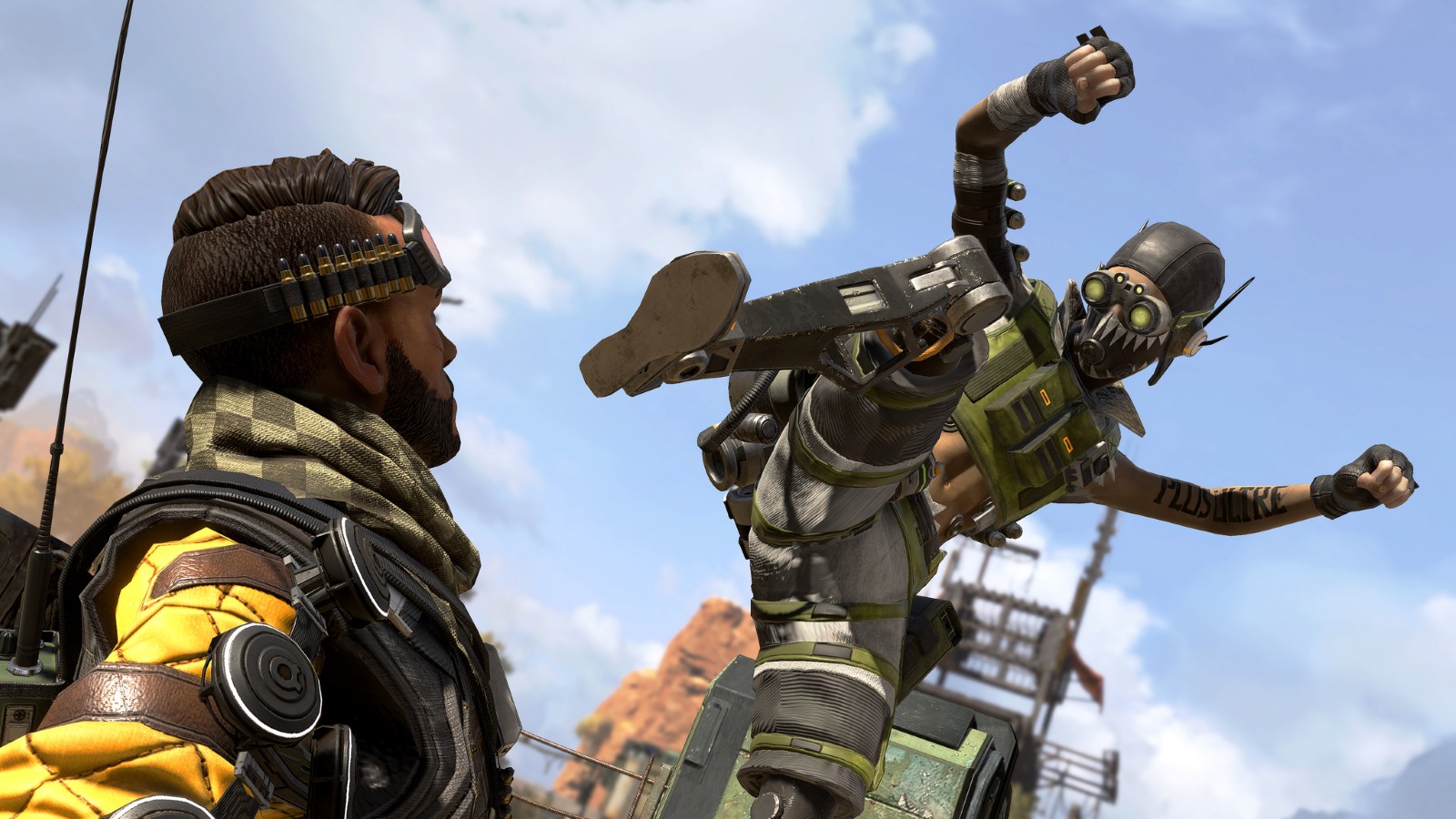 As with other similar Battle Pass-fuelled games like Rocket League and Fortnite, the rewards available in this season are time-limited. If you don't grind away and unlock them this season, you'll just have to hope that they get filtered into the store and Apex Pack rotation afterwards. Fortunately the goals for this first season are specifically geared towards players still learning the ropes. Better yet, despite the pass costing 950 Apex Coins, you can earn 1000 more from the pass itself, so dedicated players can effectively earn the next Battle Pass (or unlock Octane) through regular play.

You can see the full list of costume gubbins, weapon skins and more on the official Battle Pass page here. Buying the pass automatically gets you a trio of new skins, one for Lifeline, one for Wraith and one for Mirage, although they're all a little grim and drab for my liking. Good camo, maybe? Those playing free can still earn some goodies this season, too. There's a single Wild Frontier Legend skin to be earned, 5 Apex Packs and 18 seasonal stat trackers. Personally, I unlocked everything I needed on my first day, lucking out and getting Bloodhound's plague doctor outfit. Why would I need anything else?

The Wild Frontier season kicks off in Apex Legends tomorrow, March 19th. The game is free-to-play and can be found here on Origin. The Battle Pass will be available in-game tomorrow for 950 Apex Coins (just under $10) for the regular version, or 2800 Coins for the Battle Pass Bundle which skips you ahead 25 levels/unlocks. EA haven't announced a price for Octane, but Mirage and Caustic each cost 750 Apex Coins to unlock.