Hello dear reader, ravenous chewer of news. Here is a steaming Apex Legends fact heap for you. Firstly, it is real - a great start. It has probably been released by the time you read you this, and is available free for PC-havers on Origin. It’s one of those battle royale games, but it’s also a bit more exciting than that, which I’ll get to shortly (I've had a go). It’s a first person shooter, and it comes from Respawn, the folks who did Titanfall and the second Titanfall. This is the end of detail cube one. See you below for detail cube two.

Whoa! Didn’t think you’d make it for a second there, but I’m glad you did. Welcome. Here are some more details, based on my time with the shooter at an EA event.

Yes. It is set in Titanfall 2’s universe. No. There are no mechs. At least, not right now. This is a bummer, but there is a sense of fluid mobility to it that has Respawn’s fingerprints all over it, so much so that I managed to lose the first few matches by getting myself spotted because I was jumping and sliding all over the place in sheer glee. The one map currently available is covered in big muddy hills that make (and I’m prepared to go on record with this) the absolute best squelching sound in gaming when you slide down them. I’m aware this isn’t what most people look for in a battle royale but this is my preview, and I’ll squelch loudly at inopportune moments if I want to. 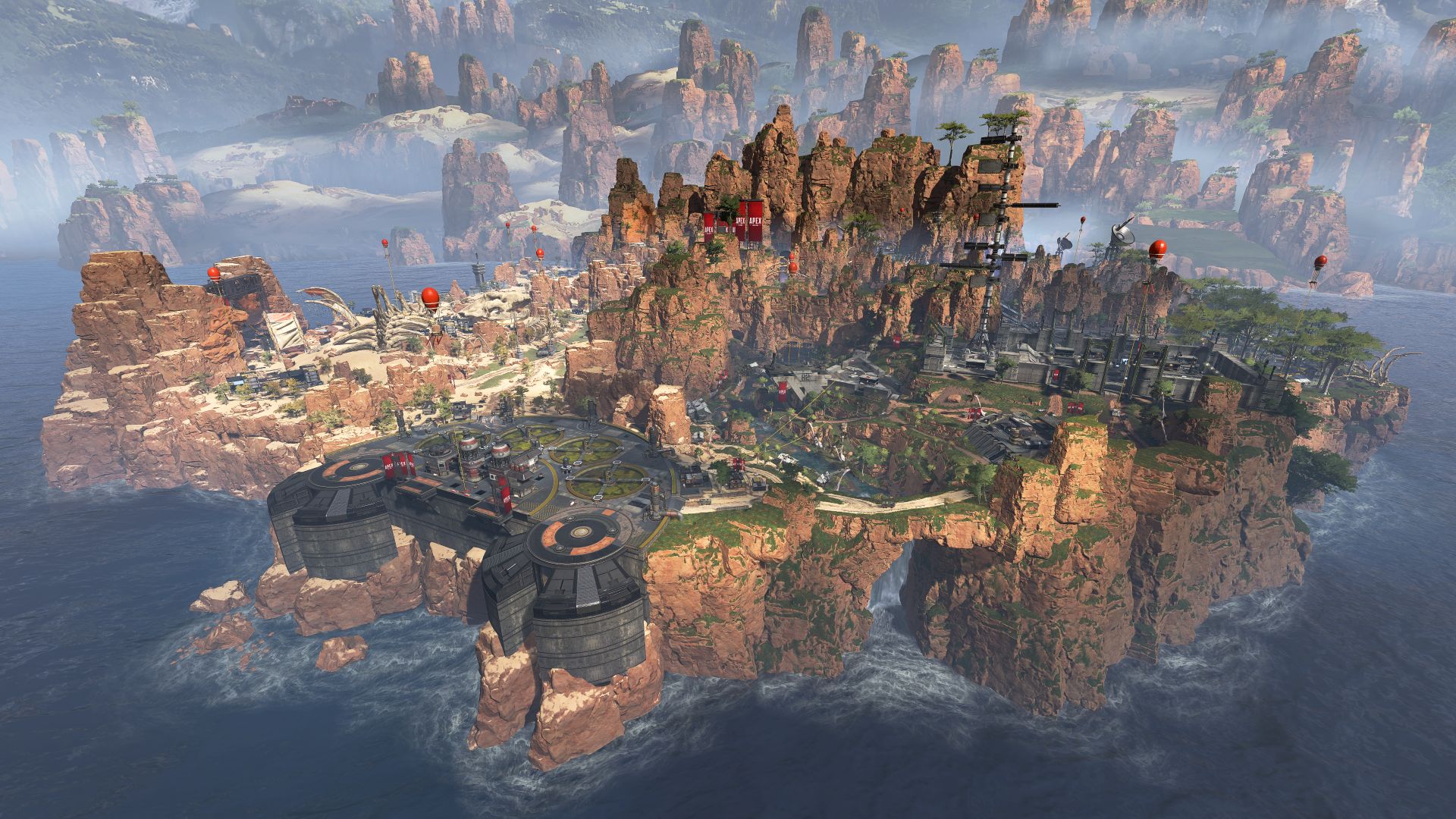 The huge map means shootouts aren’t quite as frequent as I’d have liked, but what I played was tense and about as polished as you’d expect from Respawn. It’s fairly standard fare in terms of firearms: Pistols, SMGs, sniper rifles, shotguns, and assault rifles, but there’s a few variants of each type, plus alternate fire modes and a bevy of collectible attachments. It’s still a battle royale, so you start empty-handed, and everything needs to be procured on-site. There are 60 players, split into 20 teams of three. And there's a big ring like in Plunkbat that constricts every now and then, eventually pushing teams to the centre of the map.

Apex Legends has loot boxes. The loot boxes only contain cosmetics, all cosmetics can be earned in-game, and drop rates will be listed online. Respawn told us numerous times how committed they are to maintaining a “good foundational trust” with players, and transparency does seem built-in from the get-go. They also told us that the "only cosmetics" thing is permanent, so if that changes, you can point them to this article and say, hey, you lied to Rock Paper Shotgun, sir, and that’s a gaming crime, the worst kind of crime there is. 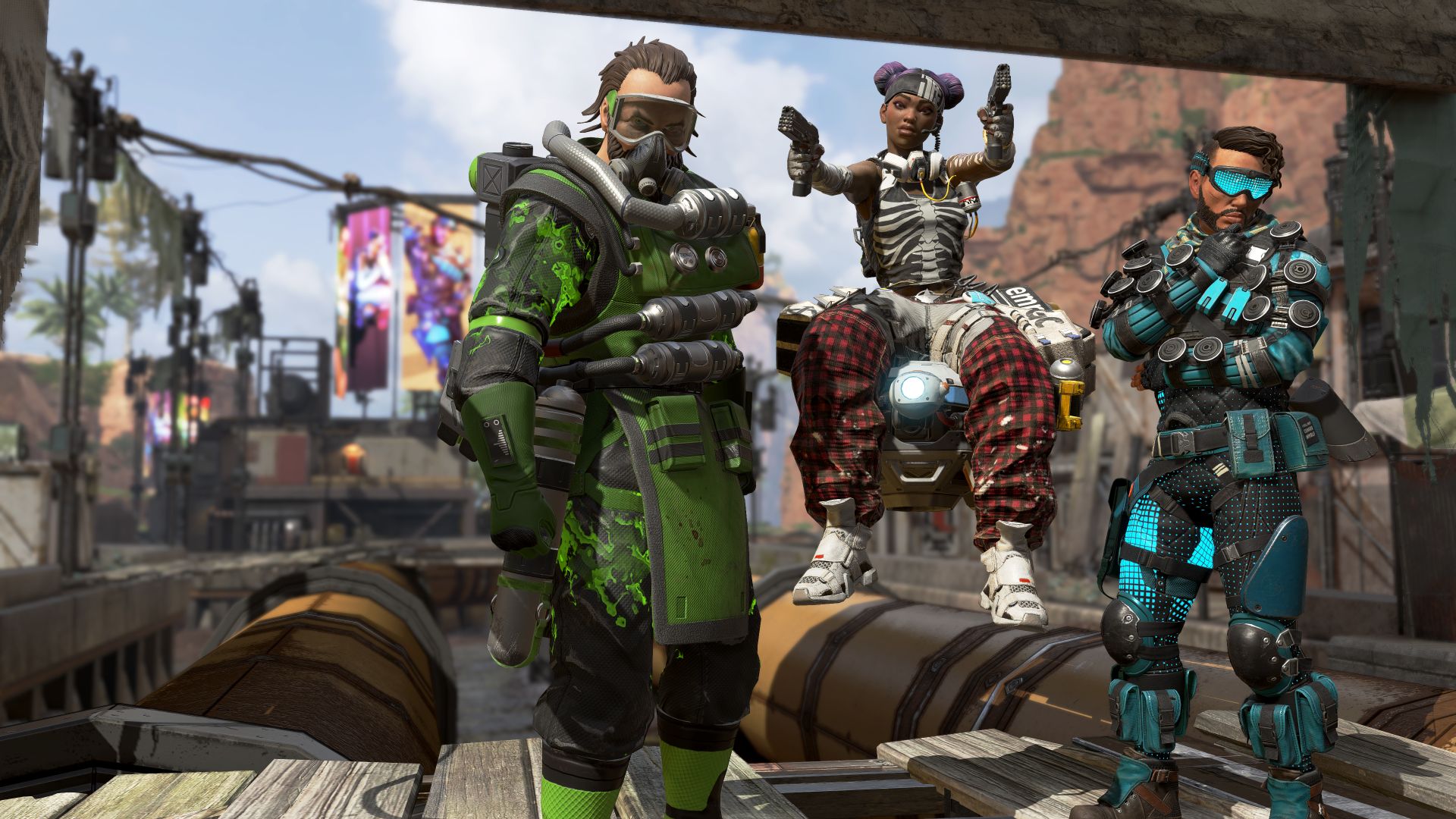 It's very much a character-based affair, and you’ll have six to choose from straight-off, with a further two to unlock with digi-monies later. Each has passive, charge, and super abilities. Gibraltar is a tank with a personal shield that activates when using iron sights, a droppable team shield, and a beacon you can throw to call in an airstrike. Pathfinder the robot can swiftly grapple onto any surface they choose, and lay down a permanent rappel line between two points for the rest of the team. There’s standard classes like Lifeline the medic and Bangalore the soldier, as well as spicier ones like Wraith: a sniper with the special ability to create portals between two points and slip through.

Caustic and Mirage, the two unlockable characters, both offer their own spin, though nothing that struck me as immediately game-breaking. Caustic’s abilities revolve around noxious gas traps. Mirage was possibly the more overpowered of the two, with the ability to create mobile decoys of himself. Even then, the recharge time is significant enough that most firefights still come down to the same movement and reflexes that all characters have equal access to. Most abilities feel less like all-conquering super powers, more like tools to contribute to coordinated, team-led plays. 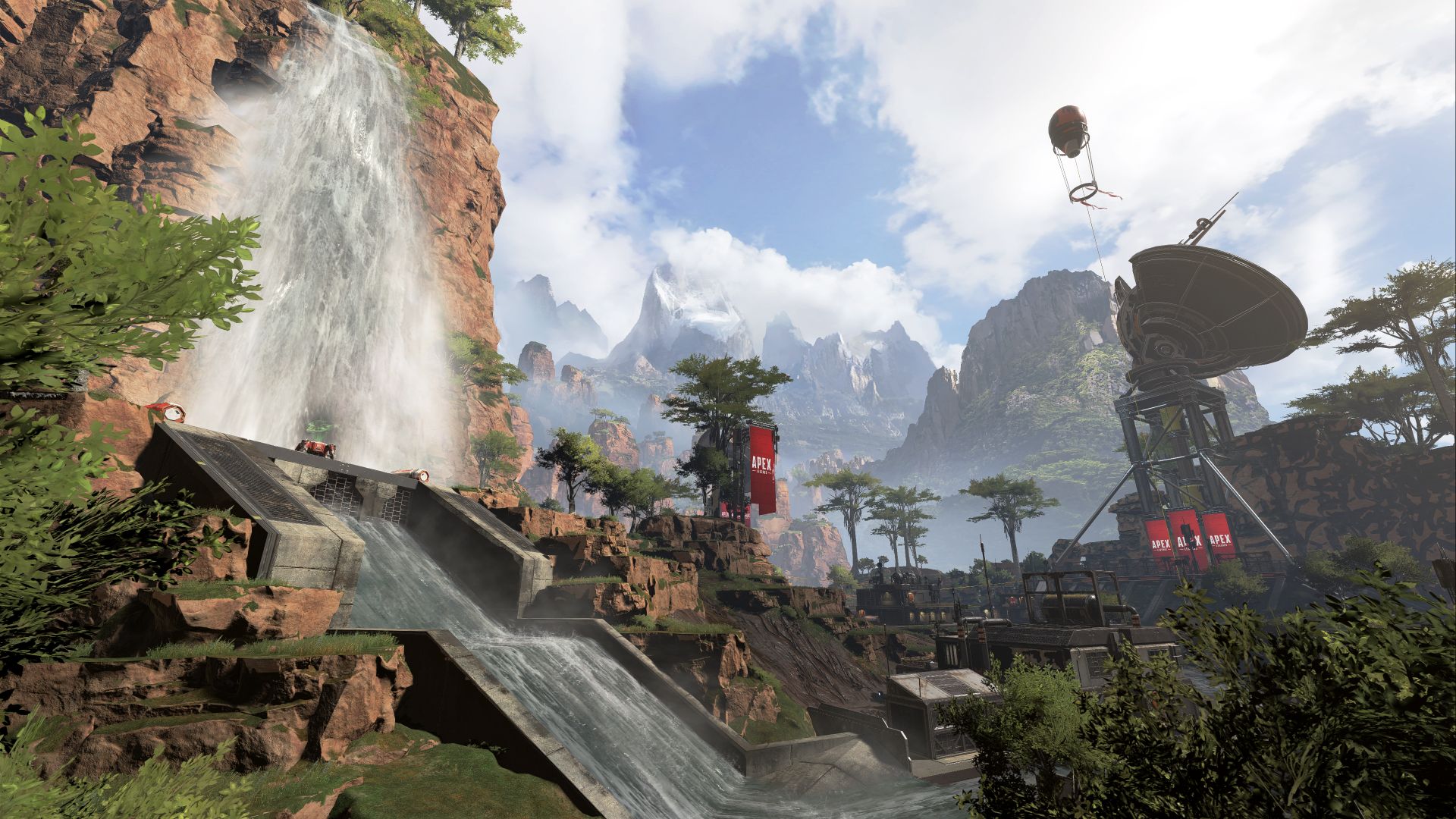 It’s this teamwork that makes Apex Legends seem, if no less competitive, at least more immediately welcoming than others of its kind. From the drop, a “Jumpmaster” is chosen at random, but other players can make suggestions on where to land by ‘pinging’ points on the map. Once landed, this same pinging allows you to navigate, to highlight and place ‘dibs’ on loot, and to mark enemies once spotted. Crucially for the game's place in the genre, downed teammates be revived, and teams aren’t out of the match as long as there’s still one of you standing. Single use respawn beacons are littered across the map, so it’s possible for decimated teams to claw their way back to full strength. None of this feels so forgiving that it dulls the edge of a necessarily cutthroat genre. The built-in communication and lifelines lend it a sense of levity apart from the vast, isolated deathmatches battle royale has come to be known for. It all lends itself to a light-hearted, sporting feel.

“We want to keep that grounded, functional world, but at the same time keep it fun”, community manager Jay Frechette tells me. “Getting away from military dudes with helmets and having a more diverse, colorful group”. 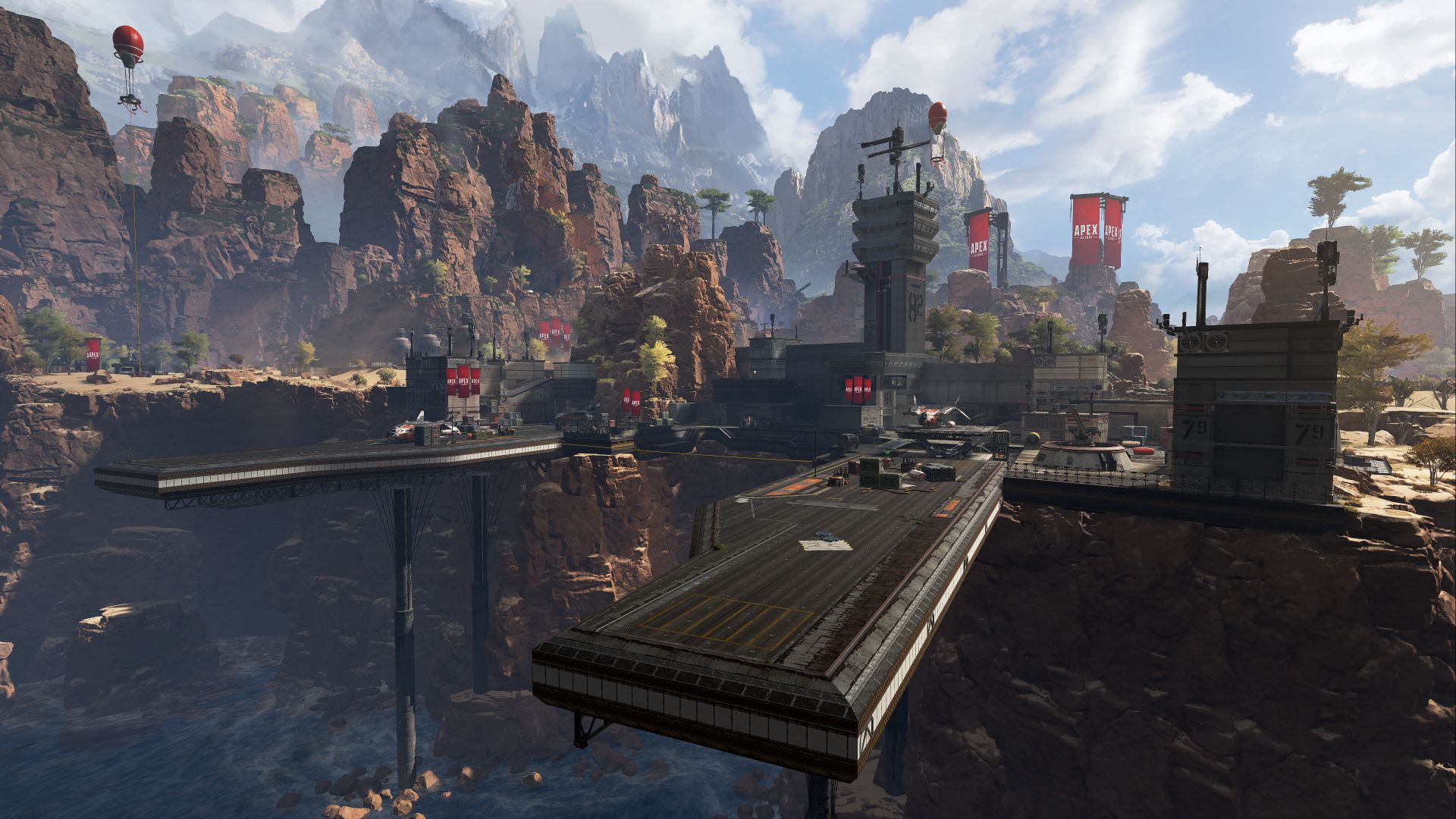 I mention Bloodhound, a tracker character sporting futuristic plague doctor garb, and Frechette confirms that yes, Bloodhound is non-binary, or at least non-specified, in terms of gender.

Apex Legends is set 30 years after the events of Titanfall 2, Frechette tells me. The “Apex Games” are an old blood sport, a way to give the inhabitants of the world something to rally around in the aftermath of war. But if this shooter hopes to make the same mark in culture as similar character-based shooters like Overwatch, we’re going to need to know as much about these characters as possible. With this in mind, just as our interview is wrapping up, I take the time to ask Frechette the only lore question that really matters. Does the robot fuck? 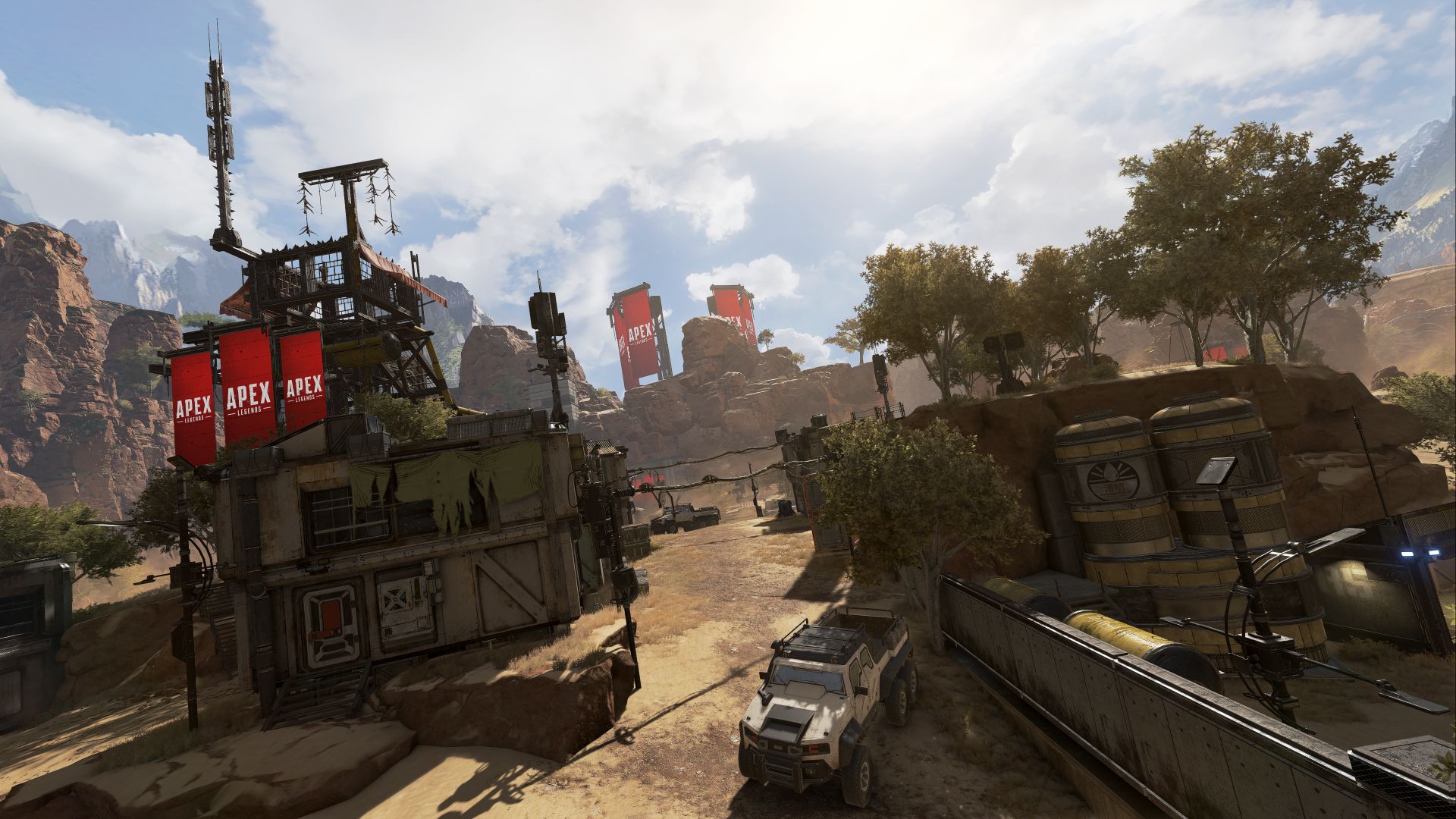 Frechette laughs and claps his hands together. Some may have taken this as a gesture of shocked amusement, but I’m sure he was just overjoyed that in a room full of streamers and press, someone was finally asking the real questions.

“He’s been around for a very long time. I’m sure he’s got his stories. He’s seen a lot.”

So there you have it. Apex Legends: Yes, it’s real, it’s quite good, it’s probably downloadable on Origin for no money by the time you read this, and the robot canonically fucks.