There’s part of me that wants to champion Artifact as a step forward for digital card games. I want to celebrate how it bottles the essence of Dota 2 into turn-based ‘take that-ing’, to enthuse, misty-eyed, about the new avenues of thought that it has me gallivanting down. I will do all that.

But with some pretty big reservations.

I’m going to write the word Dota a lot, and how you feel about that will say much about whether Artifact is for you. Take some deep breaths: here's how Valve's take on a digital CCG works.

You’re given one hand of cards to play across three different lanes. Those lanes start with a tower at forty health, and get replaced with an eighty health ancient once destroyed. Knock down two normal towers (or the ancient inside one of them) and victory is yours. Crucially, cards can only be played on lanes where you've got a hero unit that matches that card's colour.

I’ve seen it described as “three games of Hearthstone at once”, but that’s a little misleading. Units face off against each other, but there are distinct phases rather than to and fro turn-taking. It's also far, far more fiddly. Think a little bit Magic the Gathering (creator Richard Garfield worked on Artifact), a little bit Hearthstone, and a whole lot Dota 2.

Every decision is based on a dozen factors, the weight behind any given choice varying based on the specific state of the board. You've got to worry about items, gold, mana curves and lane improvements. You'll have to learn hero abilities, positioning, mind games, prediction and card knowledge. Most of all, you'll need to master lane management. 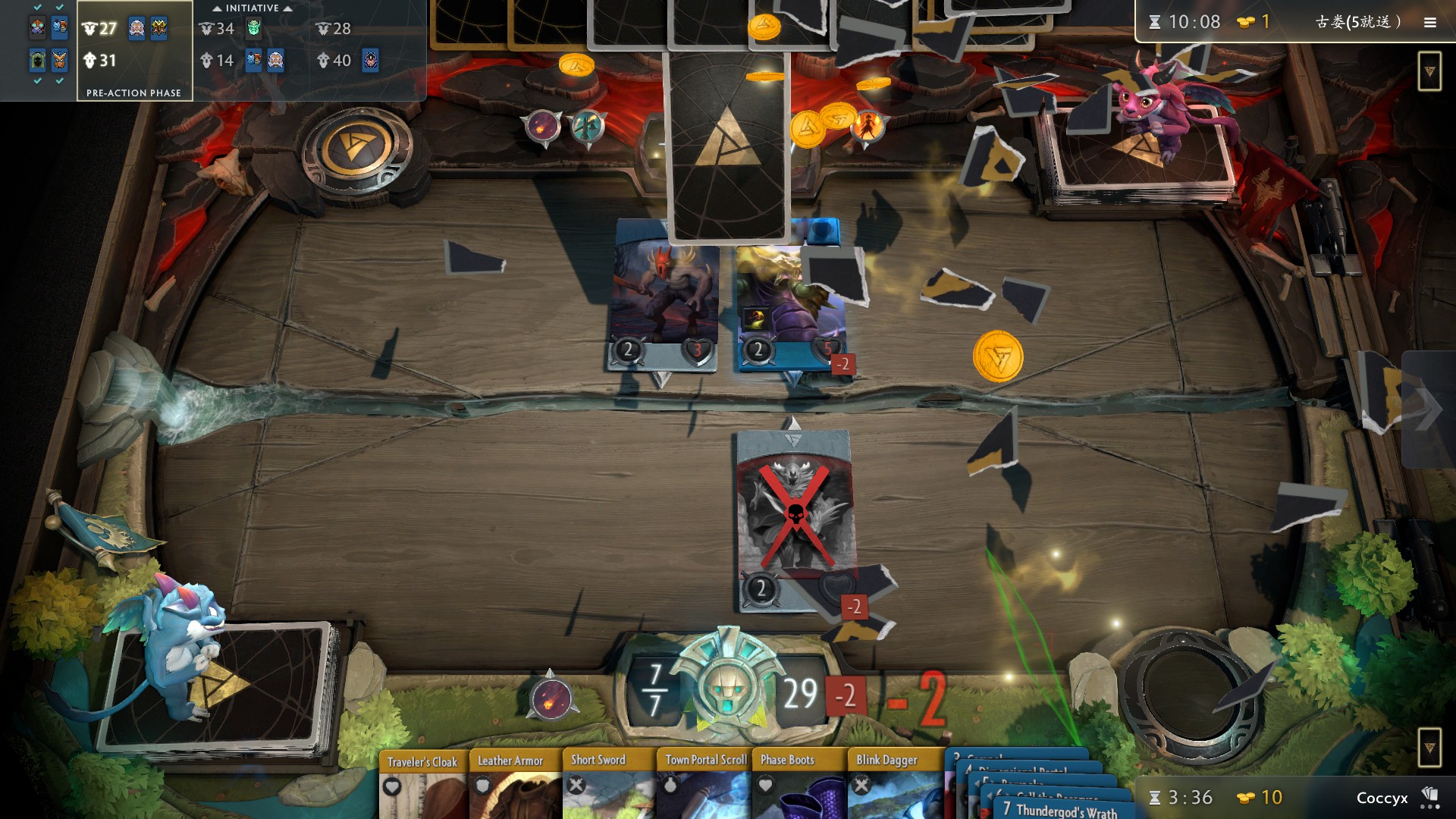 Heroes and lanes define Dota, and they define Artifact too. Whenever one of your five heroes spawn, you choose which lane to send it to. A countdown begins, and you’ve got to consider… just, so much. Synergies, psychology, stats. Combos and possibilities, bubbling away in a pot that will boil over in the next sixty seconds. They'll be over before you know it.

“If Dark Seer goes there then he can use his ability to send Ogre Magi over there”, you think, “but then he’d get squashed” - FIFTEEN SECONDS - “but not if I gave him that blink dagger, though I was saving that for Zeus” - FIVE SECONDS - "but I want Zeus in the same lane as Ogre and if they send their Phantom Assassin to mid he's doomed" - TWO SECONDS - “but but but oh sod it I’ll just abandon the lane”. 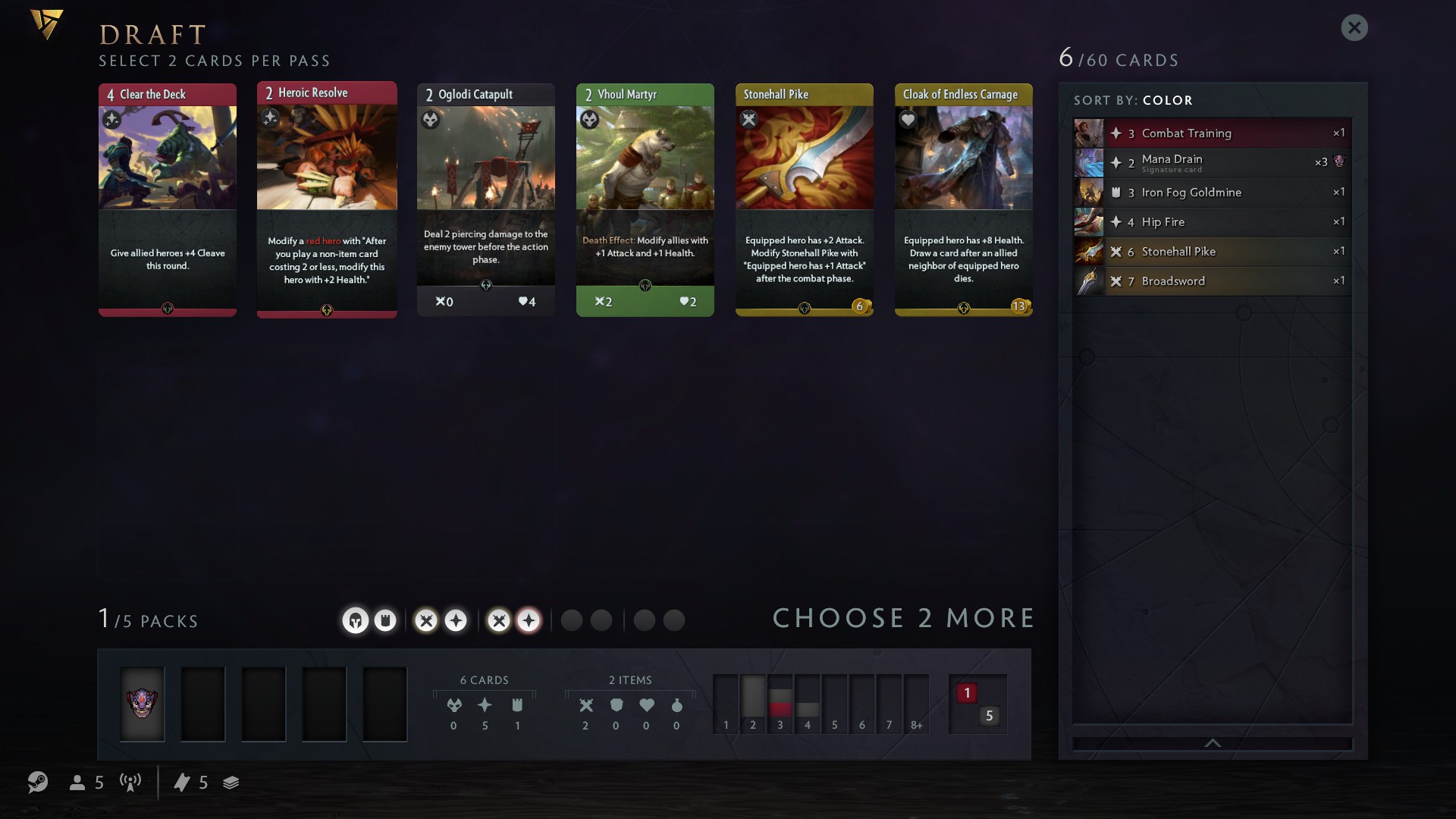 Fortunately, abandoning a lane early is often a super cool idea. Think a little ways ahead, and you can get the other player to commit their heroes to where they’re about to be redundant - which is truly a fate worse than death. Games can be won or lost off the back of one deployment decision, largely because effects that let you move from lane to lane are so rare. I just gave two examples, and those account for roughly half of the methods I know - though like so much of Artifact, it’s kind of hard to keep track.

If you listen to Brendy, he'll tell you that playing Artifact is like herding tigers. That's silly. It's more like cajoling a writhing mass of snakes, where each snake will do your bidding if you charm it with the right song on your flute. As long as you've bought the right flute. 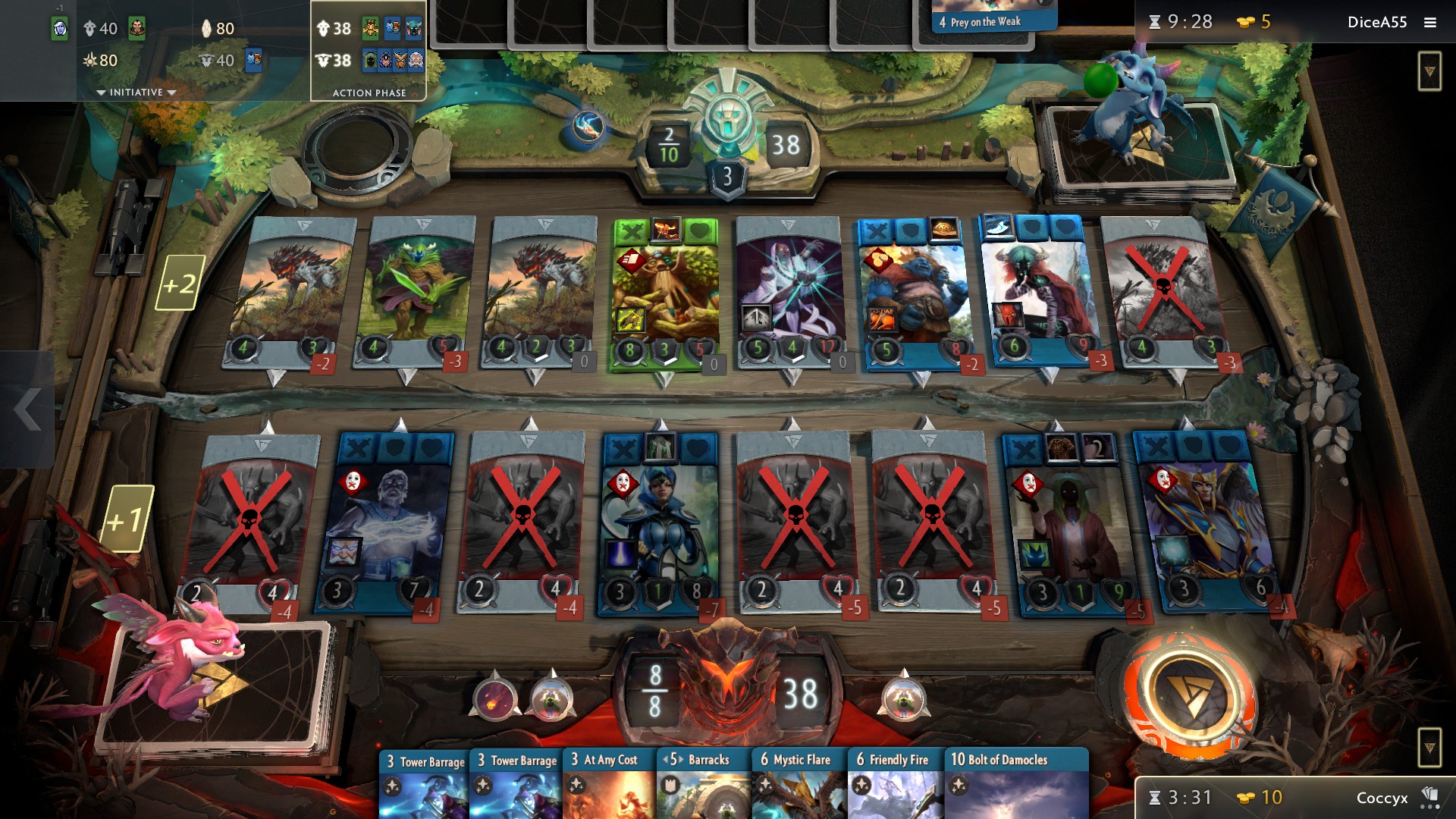 I'll talk about the business model a little later, because it's (one of) the clouds hovering over a game I've far from finished praising. Some matches are magical, where all of Garfield’s talk about casting off the limits of physical card games begins to make sense. In the climactic moments of one game, my opponent flooded the board with a dozen Hounds of War, buffed to high heaven by some nasty green cards. I hit back with a fireball that targeted every enemy in play, then followed up by reading from a book I’d given to one of my units - summoning a zombie for every allied unit that had previously perished. I won the turn after this, by the skin of my teeth.

In matches like that, where victory or defeat hinges on crucial decisions, Artifact is one of the most rewarding card games I've ever played. You wouldn't have caught me saying that when I started playing, mind.

Bringing control to randomness is the core question faced by every CCG, and Artifact's answer involves far more chance than you'd expect.

As well as drawing cards, you've got to contend with units that deploy in random lane positions and abilities that only have a chance of activating. I've been screwed over by what's been available in the item shop on numerous occasions, too. You know how it is: you wait all game for a blink dagger, then three appear at once.

You can't even count on your units attacking where you want them to, because there's a chance they'll go after enemies on their left or right rather than directly ahead. Having a deadly unit decide to polish off a measly creep rather than blow up a tower is undeniably infuriating. 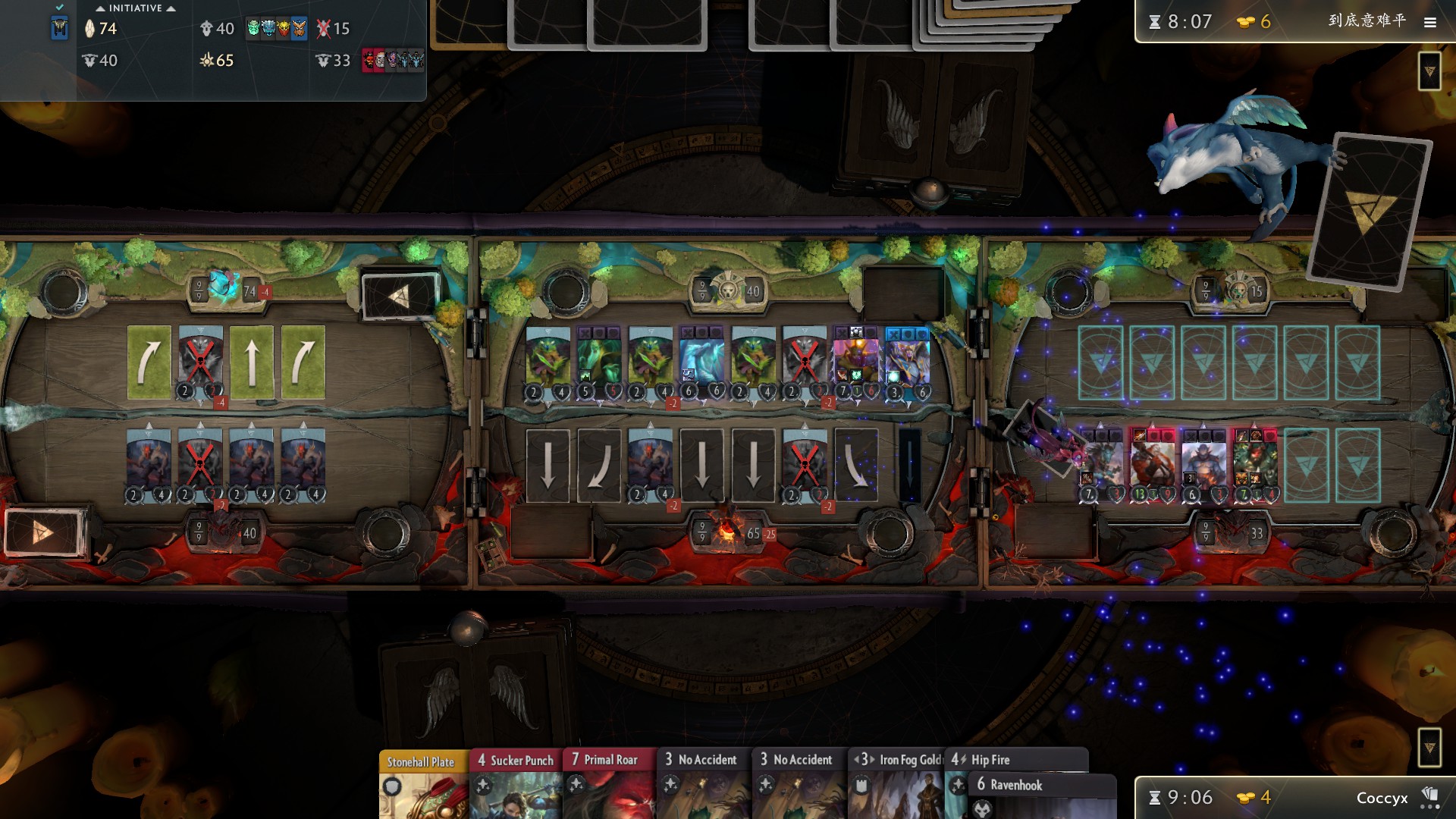 The flipside to that, though, is the satisfaction held in subverting that randomness. I won one of my best matches, for instance, by equipping an item that let me change my combat target at the very last moment. It's a confusing system in a confusing game, but opens up yet more design space where I've made interesting decisions that wouldn't otherwise be possible. That's pretty much Artifact's MO.

Unfortunately, Artifact's MO also involves charging you more than you might be used to. On top of the £16 entry fee which gets you the game, two starter decks and ten booster packs, you're expected to pony up more for additional cards. You can get around that by playing in draft mode, but if you want to play competitively then you'll need to fork up some cash. Currently, far too much of it.

After a game, you can load up your opponent's deck with a single button press. One more click, and you can buy every card you need to run that deck yourself from the Steam Community Market. It's an option I'd find tempting if I wasn't consistently being beaten by decks that would set me back between £30 and £50.

Smart plays can do more to overcome a superior deck than in other card games, but not when your opponent is strong enough to just barrel down one lane. 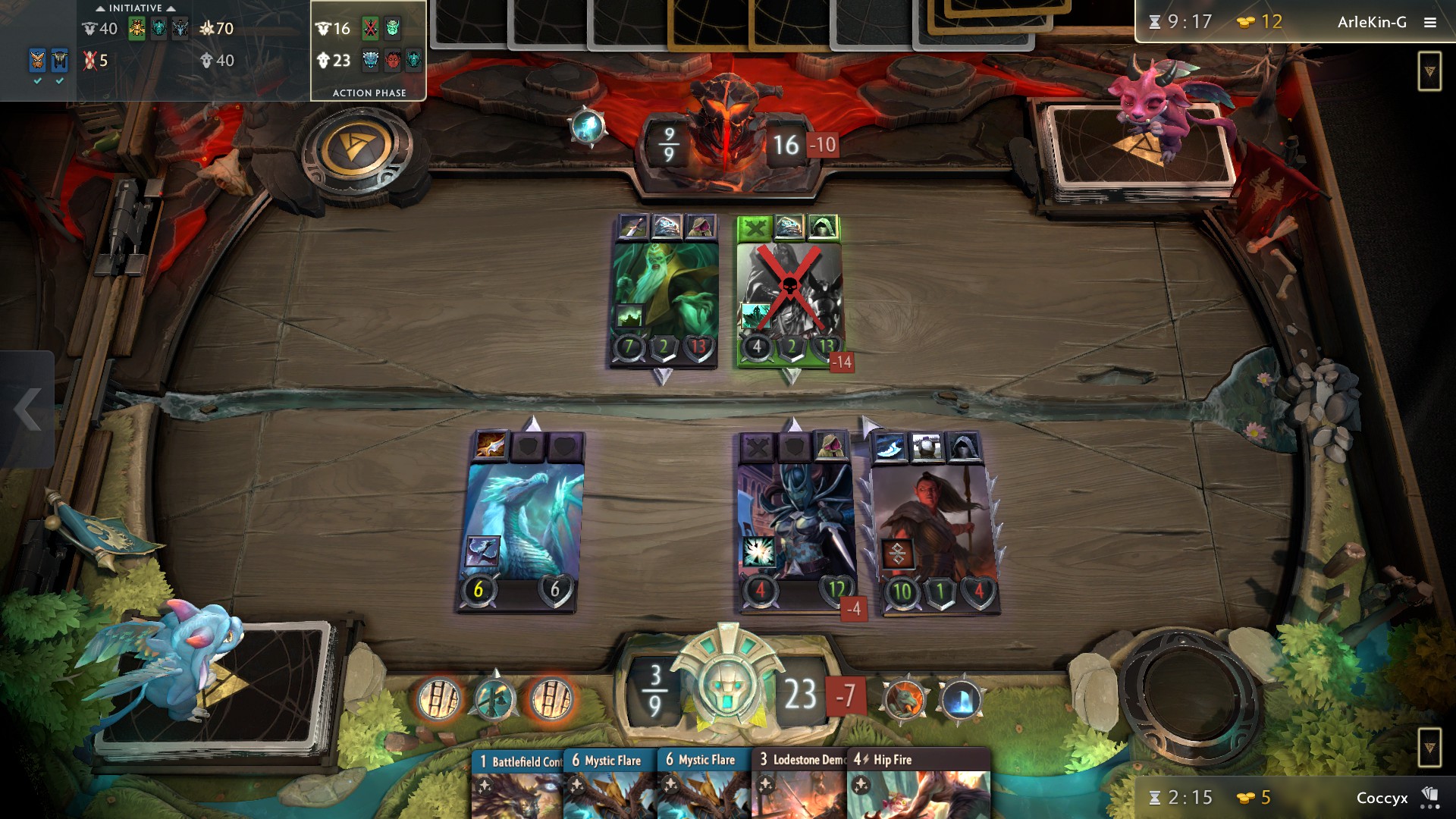 I only saw those figures in competitive play, and hopefully prices will fall in the next few weeks as people open booster packs and cards become less scarce. It's frustrating, though, that the only mode where it's possible to earn cards through playing first requires you to buy cards for a fair shot at victory. Completing a casual 'Phantom Draft' reveals a ‘claim rewards’ button, but clicking it gives out nothing but spite. Other bits of the menu mention rewards, too - almost as if a more generous version of the game was once in the pipes.

I'm also mystified at the lack of a ranked ladder system. The only measure of performance Artifact tracks are win streaks, which simply don't hold the same compulsion. Improving is fun, but I need a number that tells me by how much.

Maybe that sounds minor, and maybe this is something I can overcome, but it's cast serious doubt over how long I'll keep playing. That's silly, because every game where I haven't been smushed by cards I can't afford has been a blast. 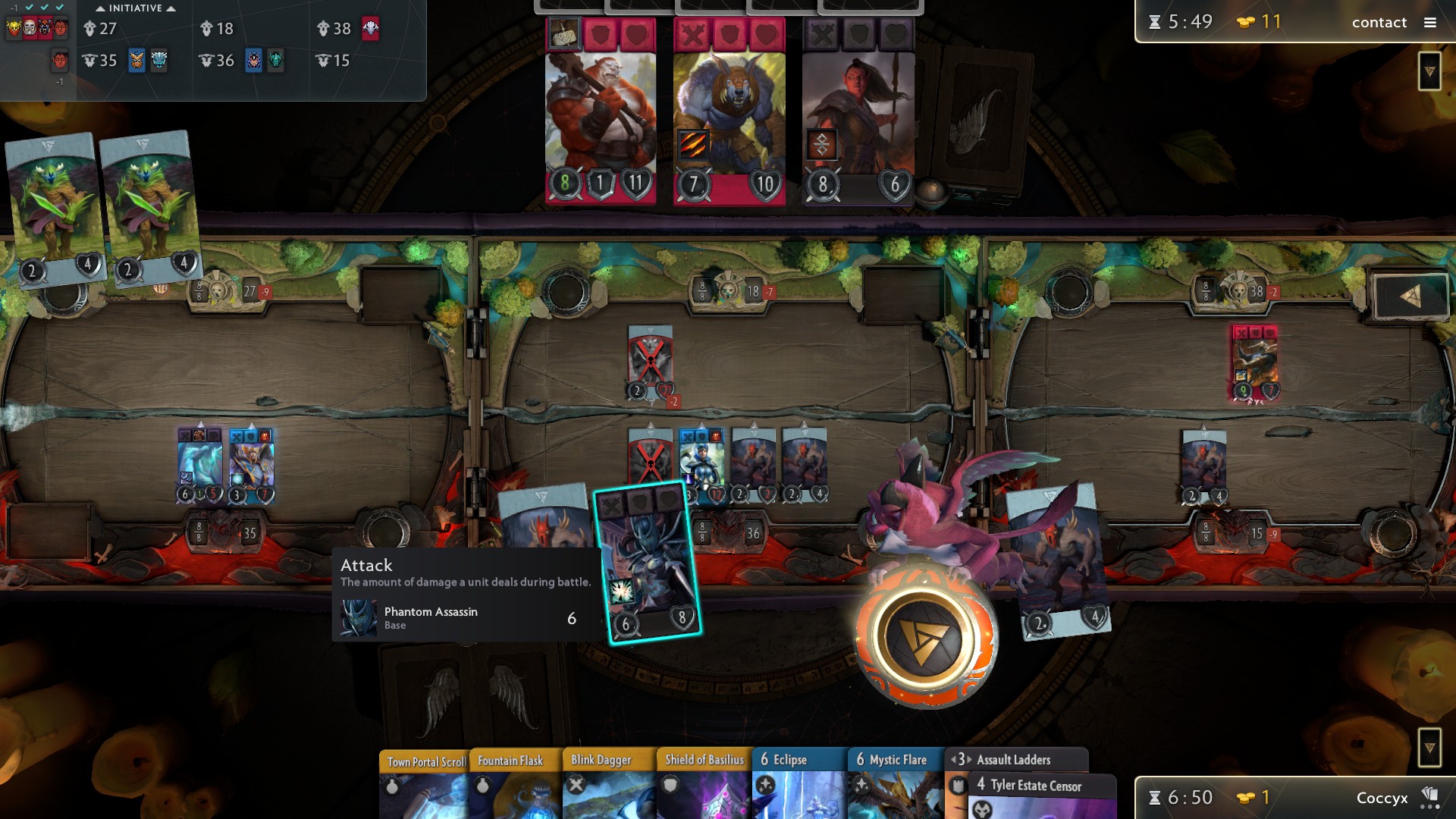 I've sat at the literal edge of my seat, chanting under my breath for my opponent to make the play I've predicted. I've cackled as they've committed to where they shouldn't, giggled when they've played right into my hands, and howled at my own game-losing mistakes.

There's a special appeal, too, for Dota players. It's remarkable how effectively Artifact captures the structure of a Dota game, where semi-isolated struggles build to climactic battles that see every hero converge on the same lane. Though not always: Artifact's well of possible situations runs deep, offering variety where other CCGs dry up. 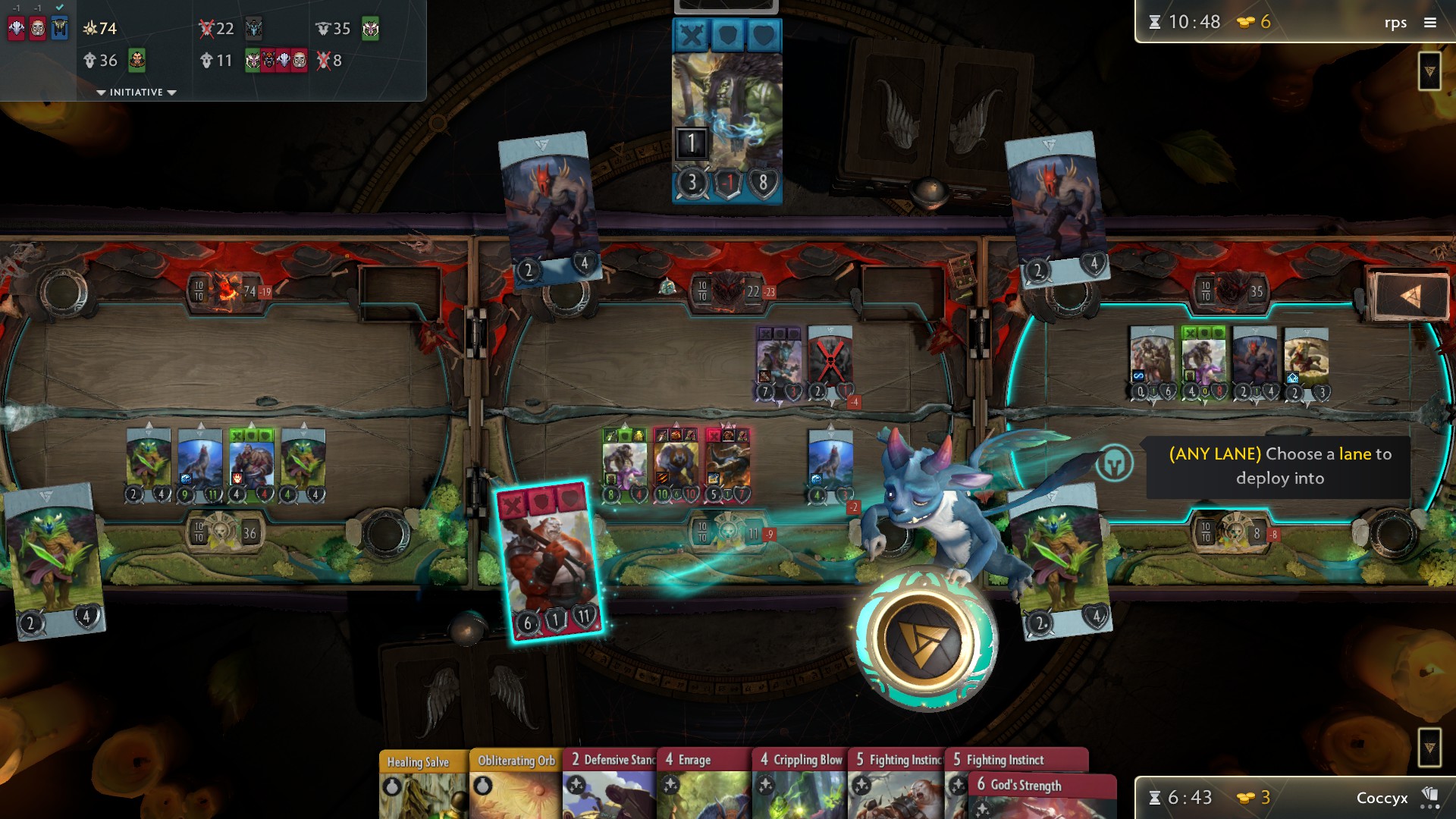 It's also an extension of a world I've spent thousands of hours in, allowing fans of a whole new genre to witness sights such as a giant rhino magically empowering his horn, then getting shot in the face by a sniper who is also a gnome. There are differences, of course. When you walk your Skywrath straight into the jaws of death, you can’t blame them for feeding.

Ultimately, though, Dota and Artifact both appeal to me for the same reasons. Both can feel overwhelming and unfair, but both those feelings can be quashed with experience - at least, outside of the competitive modes. For now, those are the preserve of the wealthy - and a question mark on the game's longevity for everyone else.