The Asus ROG Crosshair VIII Hero has probably more USB ports than you'll ever need, but if you're thinking of building a new PC with one of AMD's Ryzen 3000 CPUs in it and have a bunch of peripherals you want to plug into it, then this one is almost certainly going to fit the bill. It's going to be a pretty big bill, mind, as this particular X570 motherboard is currently one of the most expensive ones you can get, especially if you plump the extra tenner or so for the Wi-Fi model that I've got on test here. Priced at £390 / $380, is it really worth choosing this over something a bit cheaper like the MSI X570 Gaming Edge? Here's wot I think.

The Asus ROG Crosshair VIII Hero does come with a lot more in the box compared to the MSI. You get four SATA cables instead of two, for example, as well as two extension cables for any RGB strips that might be lurking inside your PC case. It also comes with a front panel connector doodad in the box, making it a bit easier to connect some of those tiny, pesky cables, a BIOS LED indicator for easy troubleshooting, and the motherboard has a lot more RGB lighting on the front of it, too, as opposed to resigning it to the back.

It does, however, feel a lot more compact than other X570 motherboards I've tested so far, particularly up the top next to the pre-mounted I/O board and CPU socket. I found it especially difficult to connect my 8-pin CPU power connector, for example, and it was a bit tricky connecting up my various channel fan headers as well.

The Crosshair's layered heatsink arrangement around its PCIe slots also felt a tad convoluted, as you not only have to remove both heatsink covers to reveal its pair of M.2 ports, but you also have to unscrew the plastic cover sitting on top of its chipset fan as well. I mean, once it's done, it's done, so it's not like you're going to be constantly faffing around with it, but of the four X570 boards I've tested so far, the Crosshair was definitely one of the fussier ones when it came to ease of use.

Still, in terms of general desktop performance, there's a lot to like here. In Geekbench 4.3, for instance, the Crosshair VIII Hero managed a single core score of 5029, and a multicore score of 32,579. The former is, admittedly, around 3-4% slower than the considerably cheaper £220 / $210 MSI X570 Gaming Edge, but the latter inches just in front of it. It was also neck and neck in PCMark 10's desktop benchmark as well, coming in with an overall score of 6577 compared to the MSI's 6640.

As a gaming motherboard, though, the Crosshair VIII Hero is pretty middling - at least compared to the other X570 boards I've tested so far. In Shadow of the Tomb Raider, it produced an average of 109fps on Highest at 1080p with its TAA anti-aliasing enabled, which is just a couple of frames behind the MSI (111fps) and the similarly-priced Gigabyte X570 Aorus Master (110fps), and only a single frame in front of the slightly cheaper £297 / $300 AsRock X570 Taichi (108fps). It managed to close the gap with the Gigabyte when I moved up to 1440p, producing an equally fast average of 99fps on Highest with TAA, but the MSI still had the edge with an average of 100fps.

It was a similar story with Assassin's Creed Odyssey, too. The Asus came third when I ran them through its internal benchmark on Ultra High at 1080p, finishing with an average of 75fps overall. They were all pretty close, though, with all four boards finishing between 74-77fps. At 1440p it was even closer, too, with the Asus and AsRock coming in with averages of 67fps on Ultra High, while the Gigabyte and MSI managed 66fps. Sure, it's not going to make a huge difference to your overall gaming performance, but I must admit I was hoping for a bit more considering its higher price.

The Crosshair VIII Hero was also pretty average when it came to SSD speeds as well. Testing my PCIe 3.0 WD Black NVMe SSD first, this managed a respectable random read speed of 46.1MB/s in AS SSD's 1GB random test, and a random write speed of 161.2MB/s. That's pretty much in line with the other X570 boards I've tested, although the latter still has a way to go before it can match the AsRock's random write speed of 178.7MB/s.

Still, when it came to testing my PCIe 4.0 Gigabyte Aorus NVMe Gen4 SSD, the Crosshair VIII Hero beat the lot of them, producing a random read speed of 66.3MB/s and a random write speed of 167.4MB/s. The latter is only a handful of MB/s in front of the MSI, all told, which managed 162.1MB/s, but it's much more promising than the Gigabyte's result of just 151.9MB/s. 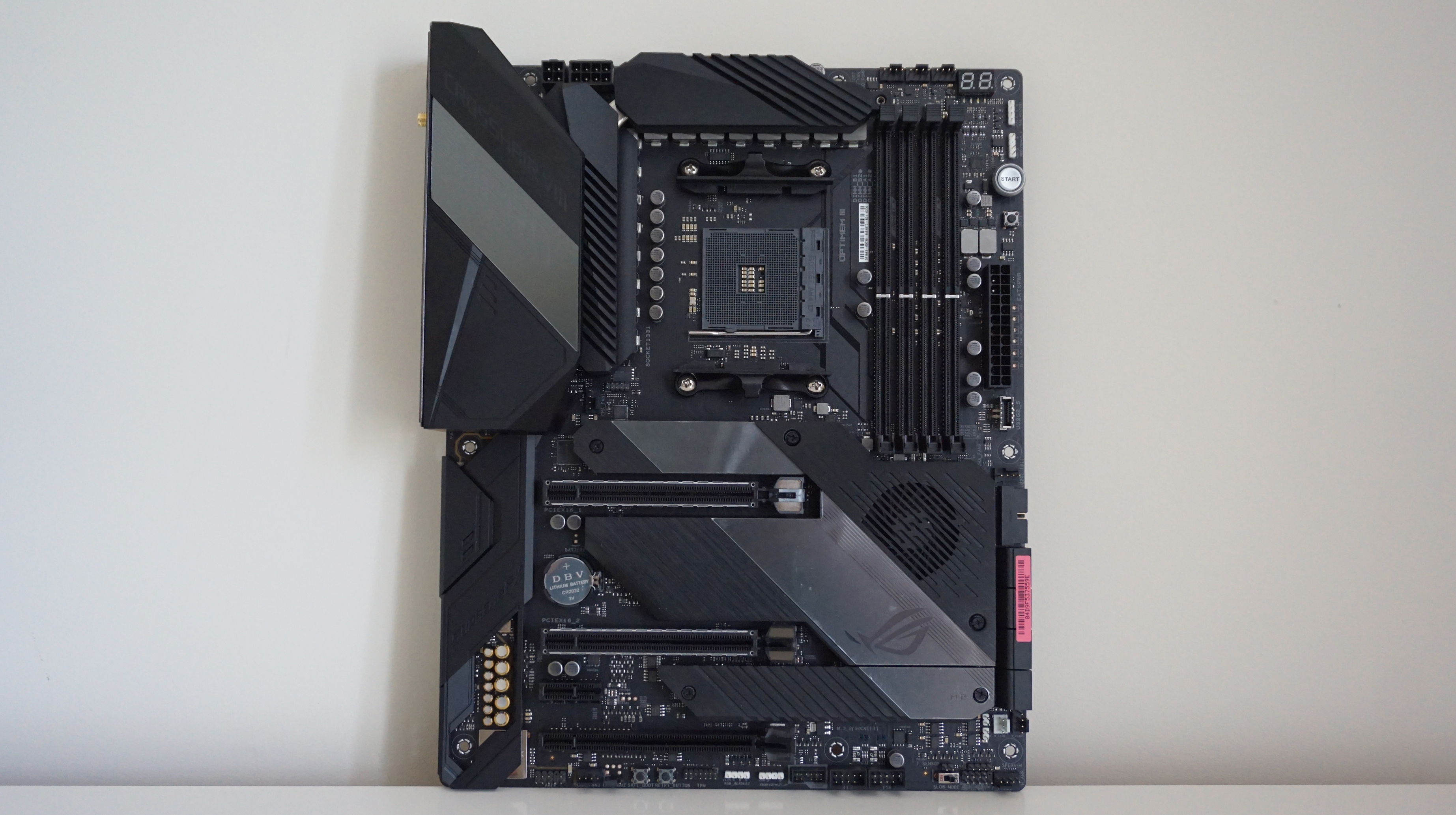 Ultimately, though, the Asus ROG Crosshair VIII Hero still doesn't feel quite as good value for money as the nippy £220 / $210 MSI X570 Gaming Edge, even if it does come with all the USB ports in the world. Instead, you might as well save yourself that extra £200 / $200-odd and put it toward a better graphics card or another SSD if you've got the budget (or just pocket it for something else entirely, of course), as it's probably not going to make your PC feel any faster than its cheaper rival.