At £390 / $360, Gigabyte's X570 Aorus Master motherboard is currently one of the most expensive X570 boards you can currently buy for AMD's latest crop of Ryzen 3000 CPUs. Sure, you get a number of handy extras, such as three PCIe 4.0 M.2 connections (plus accompanying heatsinks) for your SSDs and three PCIe 4.0 x16 slots for your graphics card and other expansion cards, but is it really worth spending all that extra money when you can get something like the MSI X570 Gaming Edge for almost half as much cash? Here's wot I think.

On the face of it, the Gigabyte X570 Aorus Master is quite a decent-looking motherboard. Backed with a nice smooth plate so your fingers don't get pronged when you eventually come to build your new PC, this RGB-ified mobo has plenty of handy features that the MSI Gaming Edge simply doesn't have. For starters, it comes with a front panel connector doodad in the box so you don't have to faff around connecting all those tiny little case cables with a magnifying glass to hand, and it also has a BIOS LED indicator to help with any potential troubleshooting.

It also comes with four SATA cables, Wi-Fi antenna, two velcro cable ties, two thermistor cables to help measure your PC's internal temperatures, a noise-detection cable, as well as an addressable LED strip adapter and an RGB strip extension cable to help light up a compatible case, plus plenty of M.2 screws and stand-offs for your SSDs.

That's a lot more than what you get with the £220 / $210 MSI X570 Gaming Edge, but when it comes to overall performance, the Aorus Master leaves a lot to be desired. In Geekbench 4.3, for example, the Aorus Master managed a single core score of just 5072, and a multicore score of 31,260. That's 3% slower than the MSI on both counts, although I should note that similarly priced boards such as the £390 / $380 Asus ROG Crosshair VIII Hero (Wi-Fi) and £297 / $300 AsRock X570 Taichi didn't fare much better, with all three boards coming in with more or less identical scores to the Gigabyte.

The Aorus Master regained some ground when I ran it through PCMark 10's general desktop benchmark, admittedly, as here it actually finished just ten points behind its MSI rival with an overall score of 6630. This also puts it ahead of both the Asus Crosshair and AsRock Taichi, which finished with scores of 6577 and 5692 respectively, but it still doesn't feel like you're really getting another £100 / $100's worth of extra performance here.

As a gaming motherboard, the Aorus Master is once again a bit middle of the road. We're only really talking a difference of 1-3fps here, so it's unlikely you'll really see much of a difference in everyday use, but it still makes the Gigabyte feel a bit overpriced compared to its cheaper and nippier competition. In Shadow of the Tomb Raider, for instance, the Gigabyte Aorus Master managed an average of 110fps on Highest at 1080p with its TAA anti-aliasing enabled, which is a smidge better than the AsRock's 108fps and Asus Crosshair's 109fps, but none of them could top the MSI's average of 111fps. It was pretty much the same story at 1440p as well, with the MSI coming in with an average of 100fps over the Gigabyte and Asus' 99fps and the AsRocks' 98fps.

The only game where the Gigabyte really asserted itself was Assassin's Creed Odyssey. Here, it managed an average of 77fps on Ultra High at 1080p in the game's benchmarking tool, beating the MSI by 3fps, the Asus by 2fps and the AsRock by 1fps. It all got a bit samey at 1440p, though, with both the Gigabyte and MSI managing an average of 66fps on Ultra High, while the Asus and AsRock pipped them both to the post with scores of 67fps.

It's not like the Aorus Master is some great SSD speed demon, either. Yes, it may have produced slightly faster random read and write speeds than the MSI Gaming Edge with my PCIe 3.0 WD Black NVMe SSD (46.4MB/s and 159.8MB/s respectively), but it's still got nothing on the Asus or AsRock, particularly when it comes to random write speeds. The Asus, for instance, managed 161.2MB/s, while the AsRock was way out in front with 178.7MB/s.

It also produced the slowest random read and write speeds when I tried it with my PCIe 4.0 Gigabyte Aorus NVMe Gen4 SSD, too - which is ironic, really, given that Gigabyte made both of them. Indeed, while the Aorus Master managed a fairly comparable random read speed of 65MB/s, its random write speed of 151.9MB/s was a good 10MB/s slower than both the Asus and MSI.

As for the AsRock, I wasn't actually able to fit the Gigabyte SSD onto that particular board, as its built-in heatsink panel didn't leave enough room for it. Likewise, even if I'd removed the AsRock's heatsink panel, I would have had to have left it dangling around inside my case due to the small cluster of wires attaching it to the main board, which is neither very practical or something you'd want to put up with long-term. 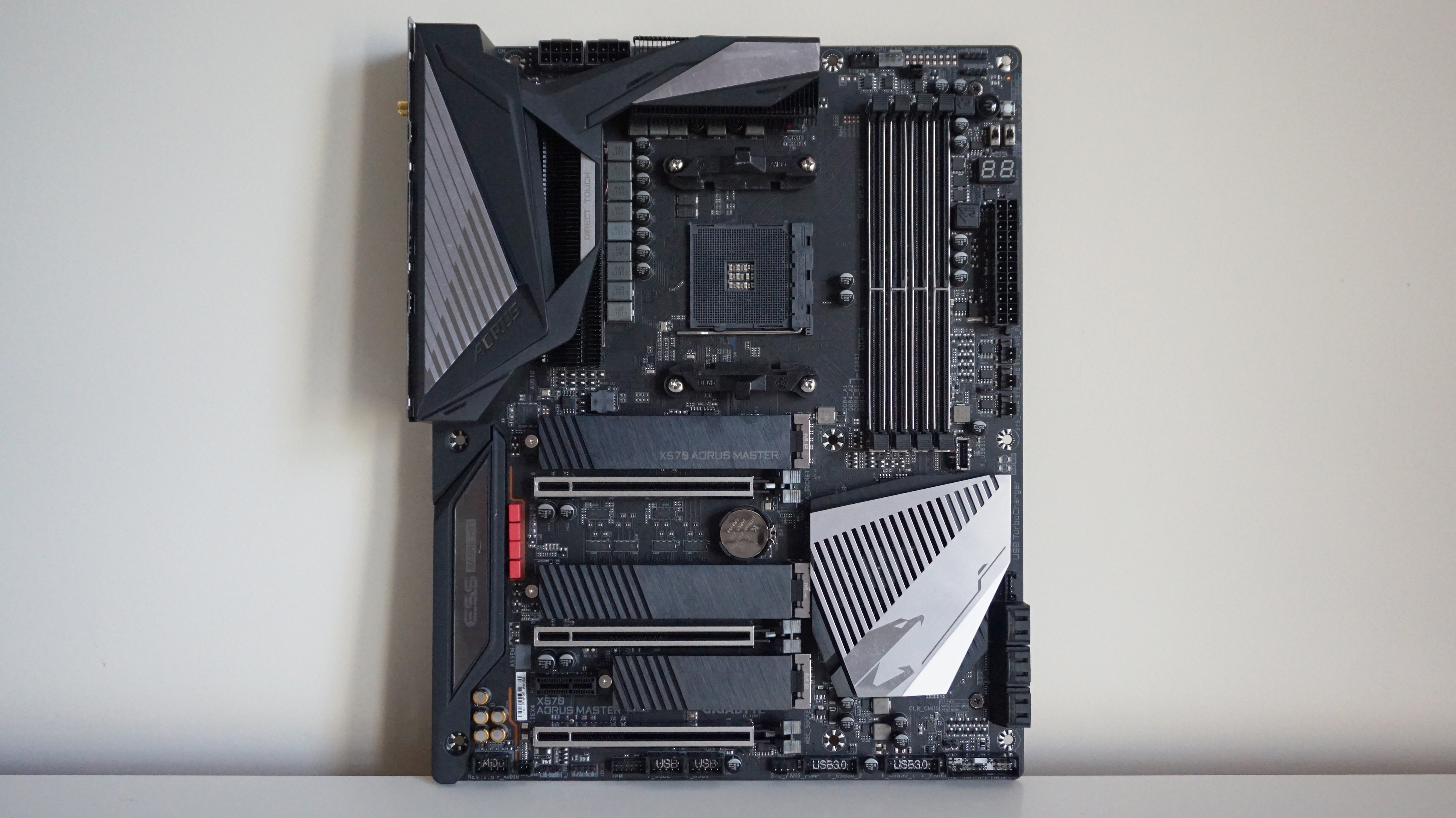 As a result, as much as I like all the Gigabyte X570 Aorus Master's extra features, it does feel very expensive and not particularly good value for money compared to other X570 boards out there. Instead, those looking to make the most of their hard-earned pennies should probably go with the MSI MPG X570 Gaming Edge instead - unless, of course, you plan on buying loads of PCIe 4.0 SSDs when they come out, or really need that third PCIe x16 slot for something. However, if you think you can make do with just one PCIe 4.0 SSD and two PCIe x16 slots, then you'll probably be much happier with the MSI.