If you click on a link and make a purchase we may receive a small commission. Read our editorial policy.
Premature Evaluation is the weekly column in which Steve Hogarty explores the wilds of early access. This week, he's farming mutant veg at the end the world in Atomicrops.

It speaks to the uneasy balance between humankind’s pessimism and optimism that we’re all fairly certain we’re going to nuke one another into oblivion at some point, but that it will also be loads of fun for those who survive the blast, with mutated trees and cool trucks and glowing green goop flying everywhere. Atomicrops is one such vision of a cartoonish radioactive future, a post apocalyptic twin-stick farming game in which vegetables grow to full size in a matter of minutes so long as they’re not munched to bits by mutated slugs.

At the crack of dawn each day you’re airdropped into your field, where you’ve got just a precious few minutes to perform your duties as a farmer of irradiated produce for the local village. You’ve got a gun to protect your crops, a bucket to water them with and a till for churning up the soil in preparation for planting. During the day you have just enough time to explore some of the surrounding wastelands, which sit to the west and east of your little plot of farmable land. Here you’ll find camps of enemies guarding new seeds and pick-ups that help automate growth, expand your plot, improve your yield and defend your precious veggies.

As soon as the sun sets, your vulnerable little farm is besieged by three waves of enemies. Mutated rabbits armed with grenades, furious moles whose faces split open like hairy flowers to spit fireballs at you, and slimy slugs and bug swarms that eat your plants if they can get close enough. Fend them off, harvest your fully grown crops and by morning you’ll be evacuated by helicopter to the village hub to spend your earnings, like Anneka Rice after she finds some treasure, except the world has ended so the treasure is a potato. 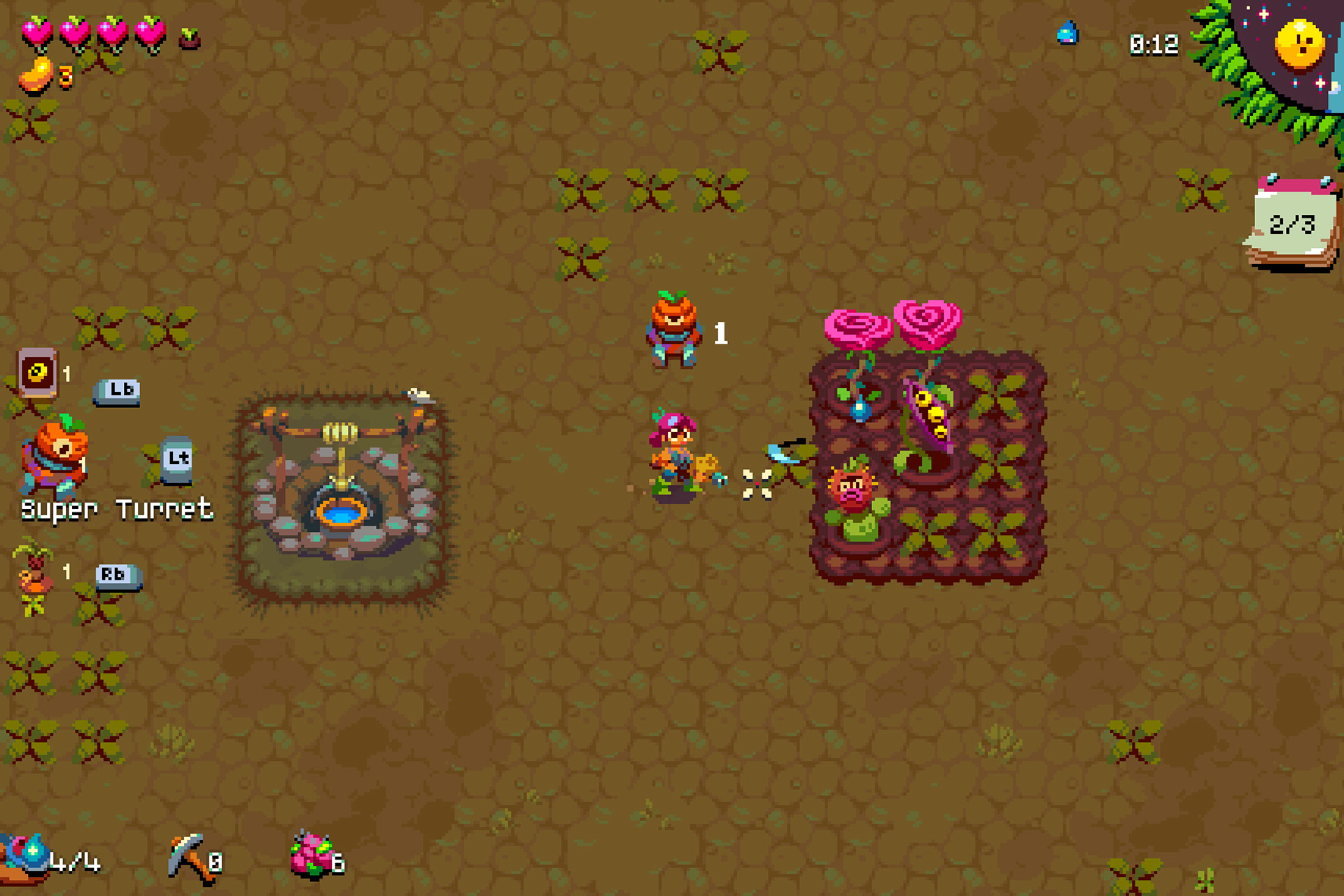 The crops you do manage to harvest are turned into currency to be spent on weapons, seeds and tools that will help you fare a little better the next day, and any infrastructure you’ve built – or animals such as pigs and cows you’ve employed to automatically till and water your tiles – will still be waiting there for you when the helicopter returns you to your farm at dawn. So subsequent days begin to shape your plot, especially as certain special kinds of seed can grow into trees that yield fruit over and over again, and certain defences take up permanent positions, like turrets that automatically gun down approaching enemies.

Taken together, all of this fighting and farming is a lot to handle. Way more than you’d expect from a game about growing mutant singing turnips. Agriculture sims are so often placid affairs, where the most stressful elements are to do with whether or not you’ll have baked enough strudels in time for the country fair. But Atomicrops giddily subverts the farming genre, offering a skill-based, frenetic and challenging roguelike with a punishing permadeath that forces you to restart from scratch each time you cork it. The game’s systems are all designed to pull you in multiple directions at once: there’s never quite enough time to hunt for new seeds, plant new crops, fertilise the ones you’ve got, gun down the nightly horrors that descend upon your garden and collect enough roses to marry one of the villagers for their special bonus ability. 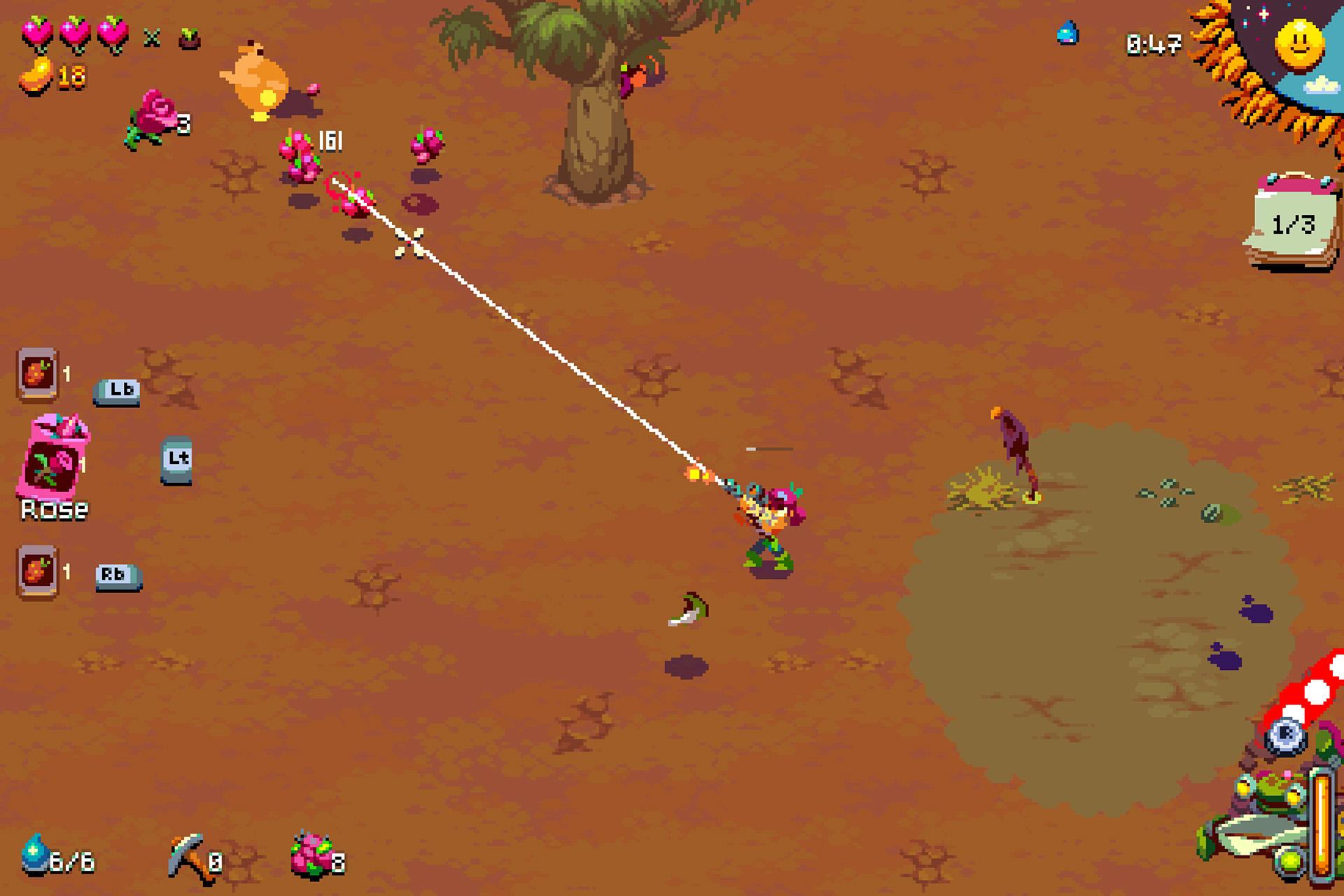 But it’s when you’re forced into multitasking that Atomicrops gets very clever. The game’s control scheme is arranged such that when several different things require your immediate attention, you can slip down a cognitive gear. The right trigger fires your weapon, while the left trigger is used for almost all of the farming activities: planting, tilling, weeding and the like. If that farming trigger is simply held down your character will do whatever job needs doing in the adjacent tiles. Watering your crops happens as long as you’re standing near enough to them and have refilled your bucket at the well. That leaves your rapidly overheating brain free to focus on more immediate threats, dodging projectiles and murdering rabbit snipers, while farming happens in a broad sense around your feet.

Passive farming like this comes with some compromise. If you can carve out a few precious seconds to be more careful about the placement of your crops, you can plant similar seeds side by side to grow larger and more valuable megacrops. And to maximise your plot’s yield you need to manually fertilise your plants with the blobs of pink stuff that falls from dead enemies. The more you get to grips with the twin-stick shooter half of Atomicrops, the better a farmer you become by stint of giving yourself more time to tend to the needs of your field. 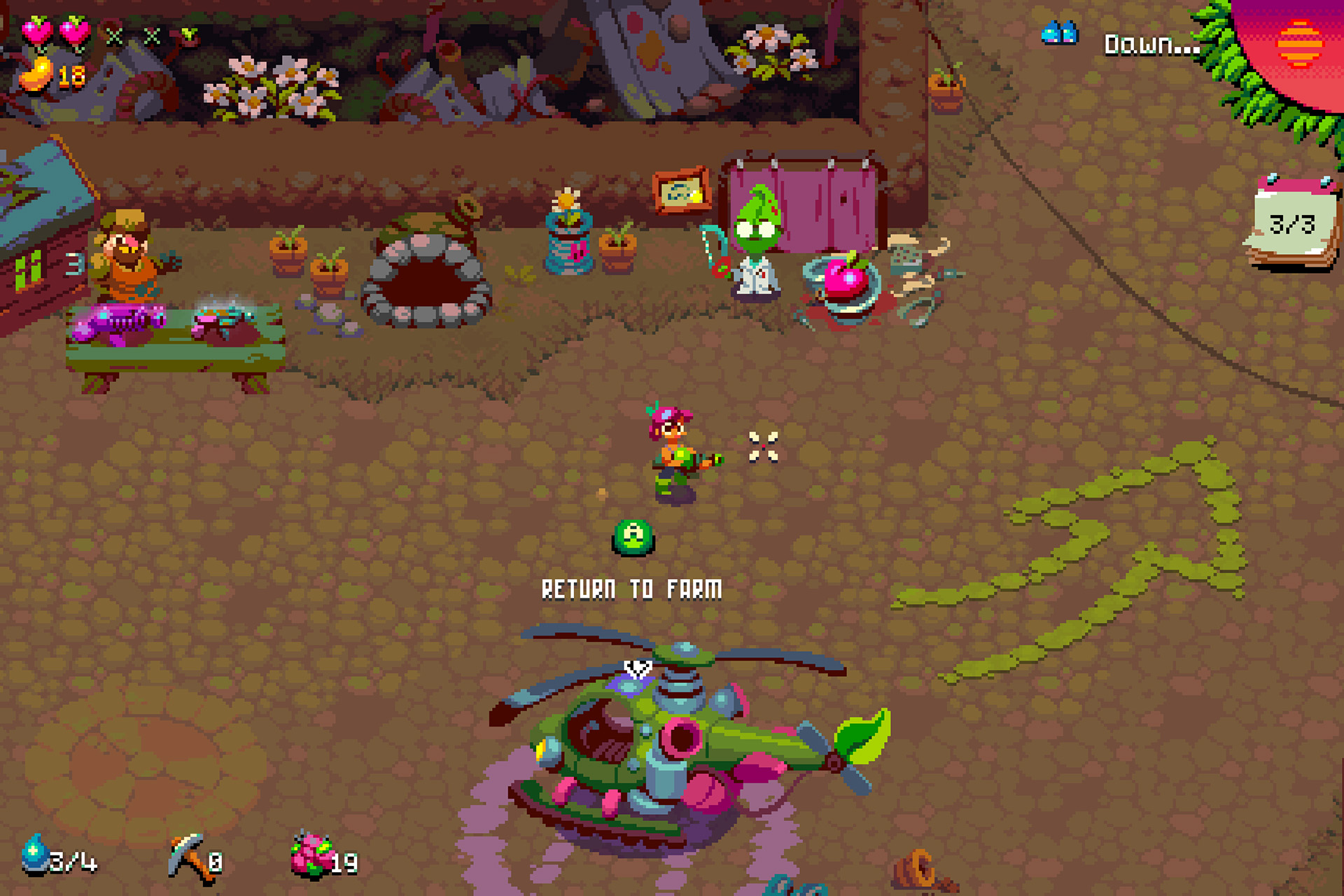 The abrupt sting of death and the subsequent loss of all of your progress still feels rude and crude however, even for a self-described rogue-lite and even after a dozen or more plays. It’s here that I expect the most improvement to the game will take place, as persistent upgrades to the farm are added and a more overarching sense of progress over repeated playthroughs is offered.

Unlike a game like Spelunky, there’s something about how externalised your farm’s development is – how your advancement over the seasons is marked in establishing a bigger plot of land, a small family of helpful animals, and a perimeter of turrets, for example – that makes starting over again feel so dispiriting. The early access version of Atomicrops feel like the amped up ‘endless challenge’ mode of another, more leisurely atomic farming game, one without the cruel finality of a game over screen, and one that I would probably enjoy playing more.

Fix that nagging feeling that your careful nurturing of a smiling cabbage was all for nothing, and what you’ll be left with is a joyously charismatic, artistic and testing twin-stick shooter, with dancing carrots and flying squirrel guns. Atomicrops is lovely for as long as you can stay alive to enjoy it.