I have been telling people I played this game called Atomicrops, and they go “Huh, haven’t heard of that one, what is it?” And then I go “It’s sort of… twin-stick Stardew Valley?” because so far that is the best shorthand I can come up with. Although it describes itself as an action roguelite farming simulator, which may be more helpful for you.

The framing for Atomicrops, developed by Bird Bath Games and out on early access next week, is that you're the last farmer in a post-apocalyptic wasteland. So rather than the sedate pace of digging, watering and harvesting that my invocation of Stardew may suggest, you have to do everything very fast because there are waves of mutant bunnies and slugs threatening your crops. 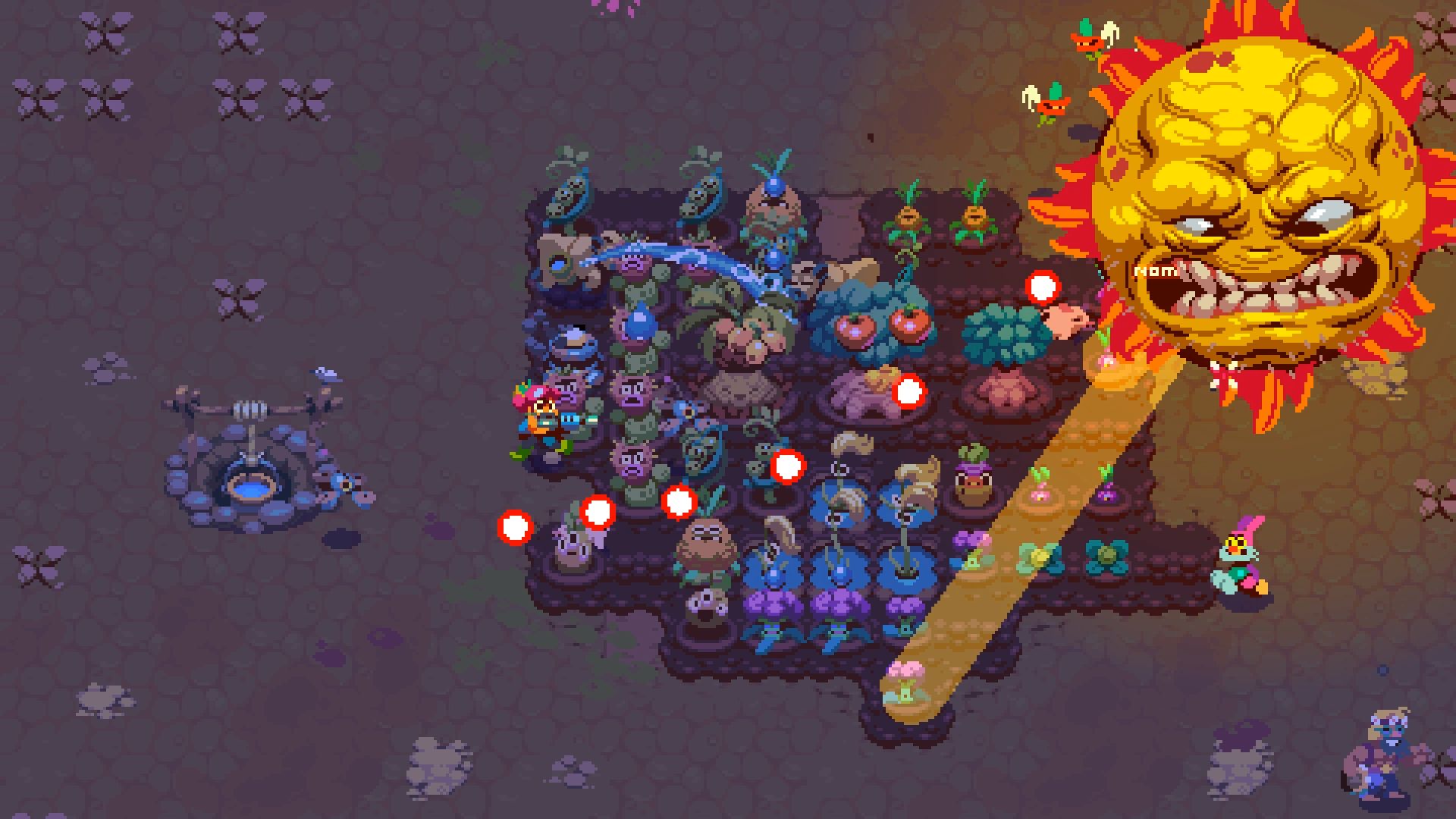 While my own efforts were initially disastrous, and I died many times (thus resetting my whole farm to the start), David Martinez from Raw Fury was luckily on hand to demonstrate a run by an actually competent player. "You wanna plant them two-by-two," he said, as I began tilling the raw earth. If you plant four of the same plant in a big square block, and then fertilise them all enough, four carrots may turn into a mega giant carrot, in exchange for more cash.

Martinez threw out other tidbits of sage advice, like "Don't even bother with the roaches" or "Get that squirrel, he'll give you seeds." There are clearly many forces at play that it takes a few hours to uncover and understand. Easy to learn, hard to master, as they say. Watching Martinez play Atomicrops was, to an untrained eye, like watching someone play a complicated piano piece. He dug and planted and fired and watered all at once, without pause.

Once you play it yourself you realise that, while skill is most definitely required, the controls are set up to help you. Watering happens automatically as long as you have some water from the well, and you can fire your weapon with one trigger while you do all your gardening actions with the other. Once you start to get your eye in, it makes for good fun that you want to keep having.

So, a day on the farm goes like this: you arrive, you check if you have any seeds you can plant, see if anything needs watering, and then, as quickly as possible, head out to one of the wastelands abutting your farm. We got to see meadows and desert, but there are four areas total, each with slightly different cartoonish monsters to deal with. The meadows have happy trees that throw explosive pine cones, and big angry buffalo things, and giant wasps. In the desert, you are dive-bombed by hideous shadow vultures and there are hermit crabs living in nuclear waste barrels. There are a lot of projectiles on-screen at any given time.

You shoot these creatures, until they are deaded. Clearing out camps of bunnies will net you rewards that increase your productivity. Maybe you get a rain cloud that makes your crops grow faster. Maybe you get computer chips that improve the performance of any turrets you put in. You can also rescue farm animals. A cow will water your crops for you, for example. You can also get a pig, a chicken and, that farm staple, a single large bee. 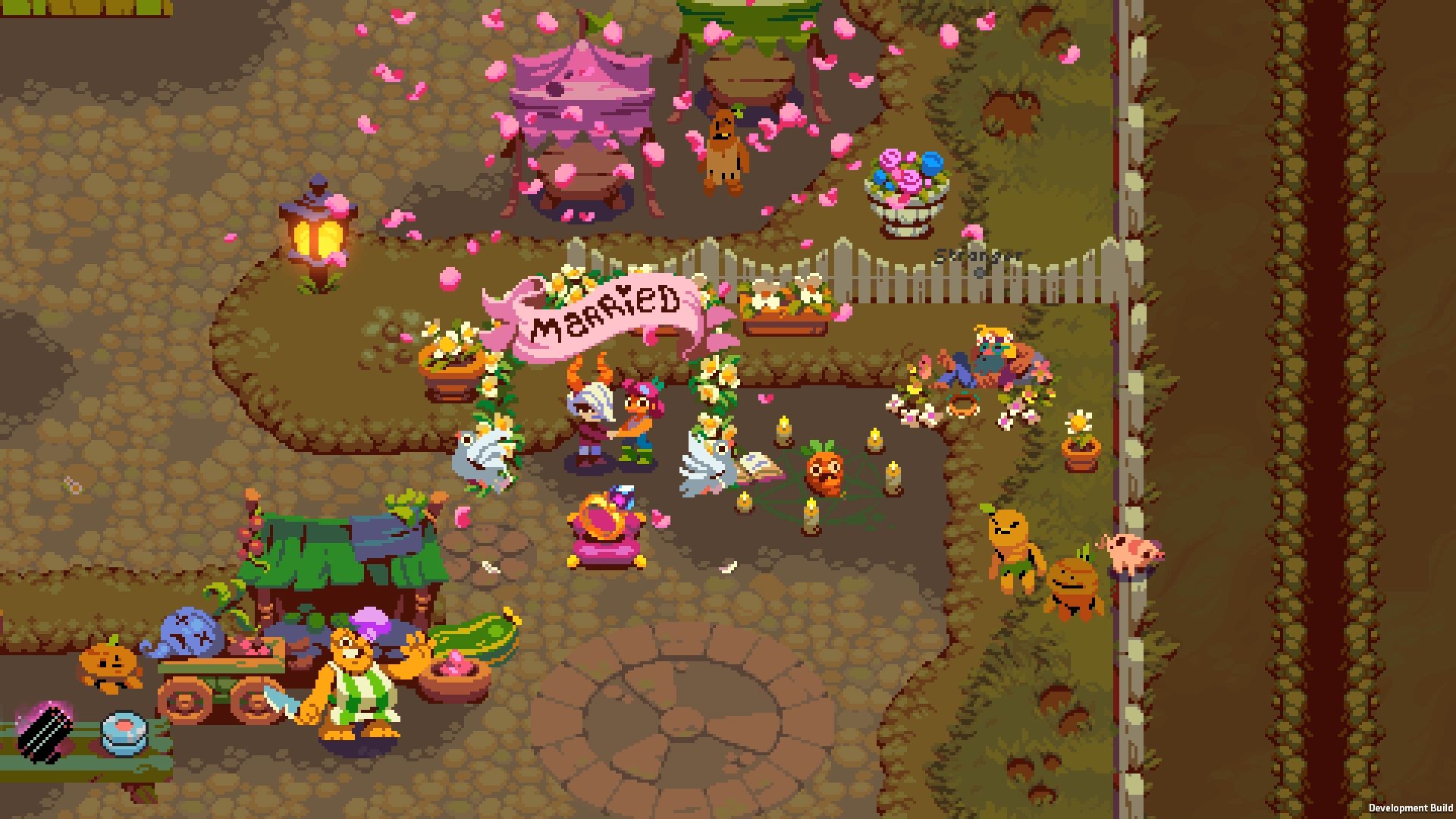 But - and this is important - you have to high-tail it back to your farm before dark, because then waves of enemies come atcha trying to kill you and eat your potaters. And you need your crops because, crucially, the one thing you can't pick up in the wasteland is a new gun. Those can only be bought from the shop, which you visit at the end of every day (and where you can also woo prospective partners). If you haven't harvested enough to sell, you're stuck with your peashooter.

I should mention that the draw of Atomicrops is only enhanced by the fact that it all sort of looks like the kind of Saturday morning Cartoon Network show that was secretly meant for adults, with a kind of "everything has a face" approach to design that I appreciate. When crops are ready to be harvested they bounce up and down happily. It's nice when vegetables are happy to be eaten, although vegetables with faces may present an ethical quandary for vegans.

Atomicrops is out as an early access Epic Store scloosie on Thursday, September 5th.