If you click on a link and make a purchase we may receive a small commission. Read our editorial policy.
Developer: Tindalos Interactive
Publisher: Focus Home Interactive

In the grim darkness of the far future, there is only war. This is a lie, of course. There’s also fancy hats, for example. I know this because I’ve seen the admirals of Battlefleet Gothic: Armada 2 wearing them while they command their giant space cathedrals to do a murder at other giant space cathedrals, in a sequel that veers fairly close to the original, but with some vastly updated visuals, and some surprisingly gripping storytelling.

Armada 2’s Imperial campaign gives you combined control of the Imperial Guard and Adeptus Astartes and Mechanicus (that’s Space Marines and Robot Space Marines) in an effort to defeat Mighty Chaos Warlord Abbadon the Despoiler, who is much less terrifying if you call him “Abby D” like I do. There are sizeable campaigns for both Necrons and Tyranids too, along with a skirmish mode that lets you choose any of the tabletop game’s factions and go prow-to-prow against AI or other humans. It’s a hefty, generous package altogether. The Imperial campaign alone took me about 25 hours skipping some of the side missions, if you include the time I had to restart the whole thing due to bollocksing it up. 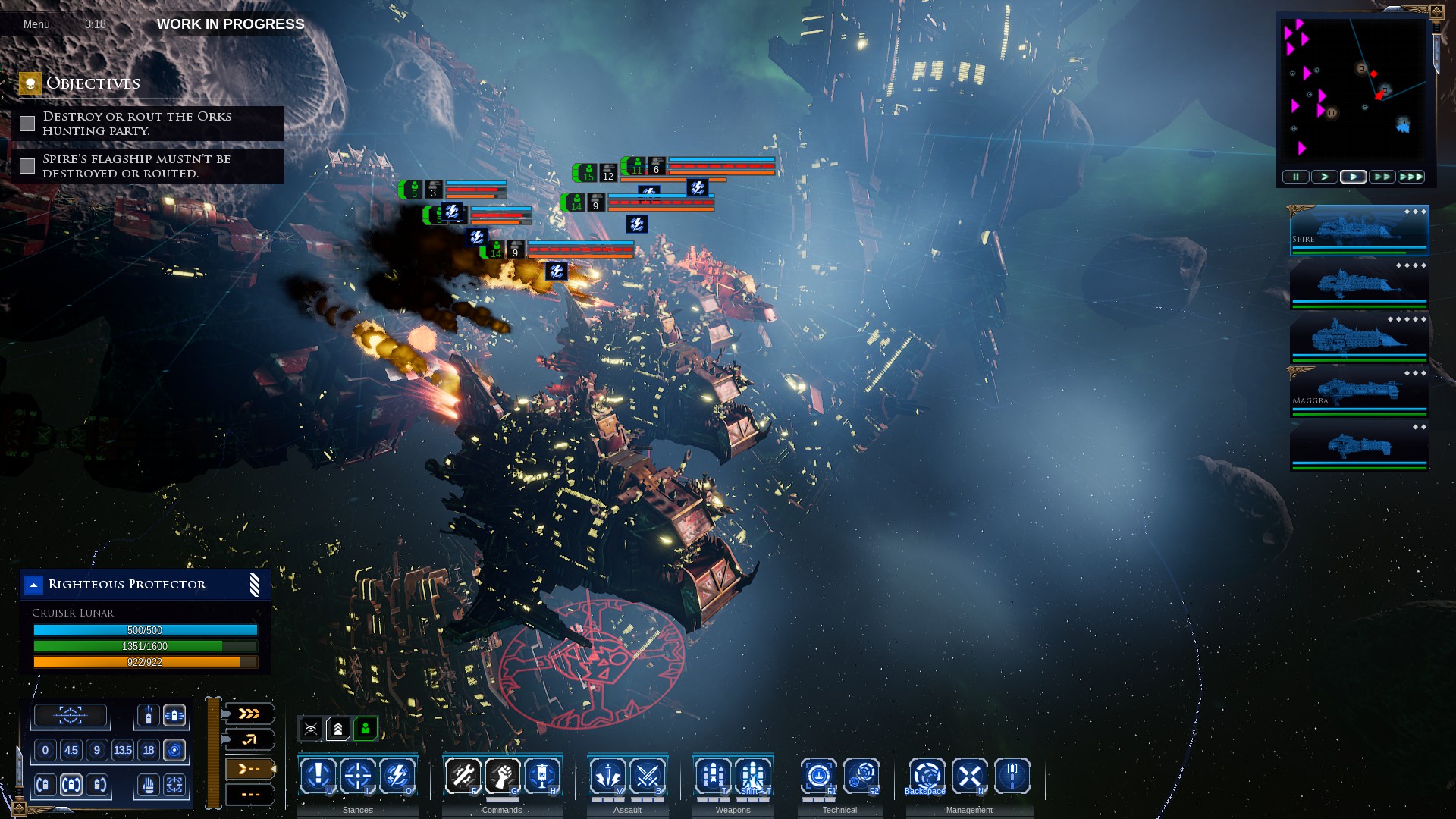 For those unfamiliar with the premise, in standard matches you’ll be controlling small fleets of very, very big ships and using them to capture strategic points, or in the story missions you’ll be completing a variety of objectives. Most ships are monstrous, unwieldy things, difficult to maneuver, and hosting abilities that only work from certain angles. So you’ll need to be constantly thinking ahead and reacting to your opponent to get the best out of them. Some may call it micromanaging, but I think Daniel Starkey summed it up perfectly in his review of the first Battlefleet Gothic: Armada by saying that he “always had something to do”. The sheer amount of choice often turns relatively slow-paced battles into frantic, involved skirmishes. 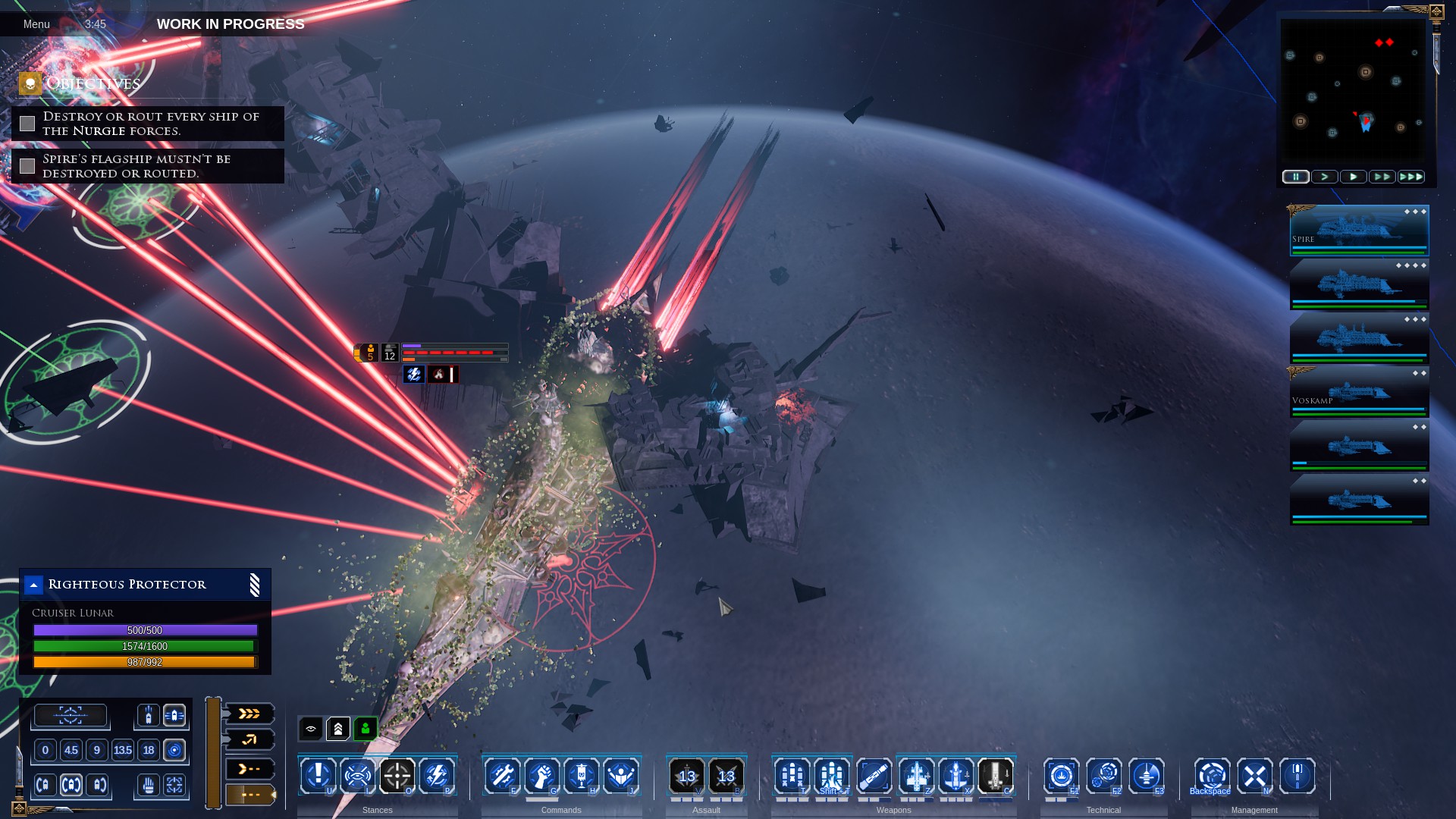 And it’s bloody beautiful, it is. Battles are a cacophony of clashing bulkheads and sizzling plasma, a carnival of pyrotechnic flair. At one point, I noticed that destroyed ships not only leave floating, smouldering wrecks behind, but that the wrecks have their own physics. One of the biggest models available in tabletop 40k is the Thunderhawk Gunship. Here, you’ll be launching squadrons of Thunderhawks no bigger than gnats. Zoom in far enough, and you’ll see each one individually animated. It’s dozens of tiny details like this that make Armada 2’s battles some of the most gloriously escapist science fiction naval conflicts I’ve ever had the joy to command. 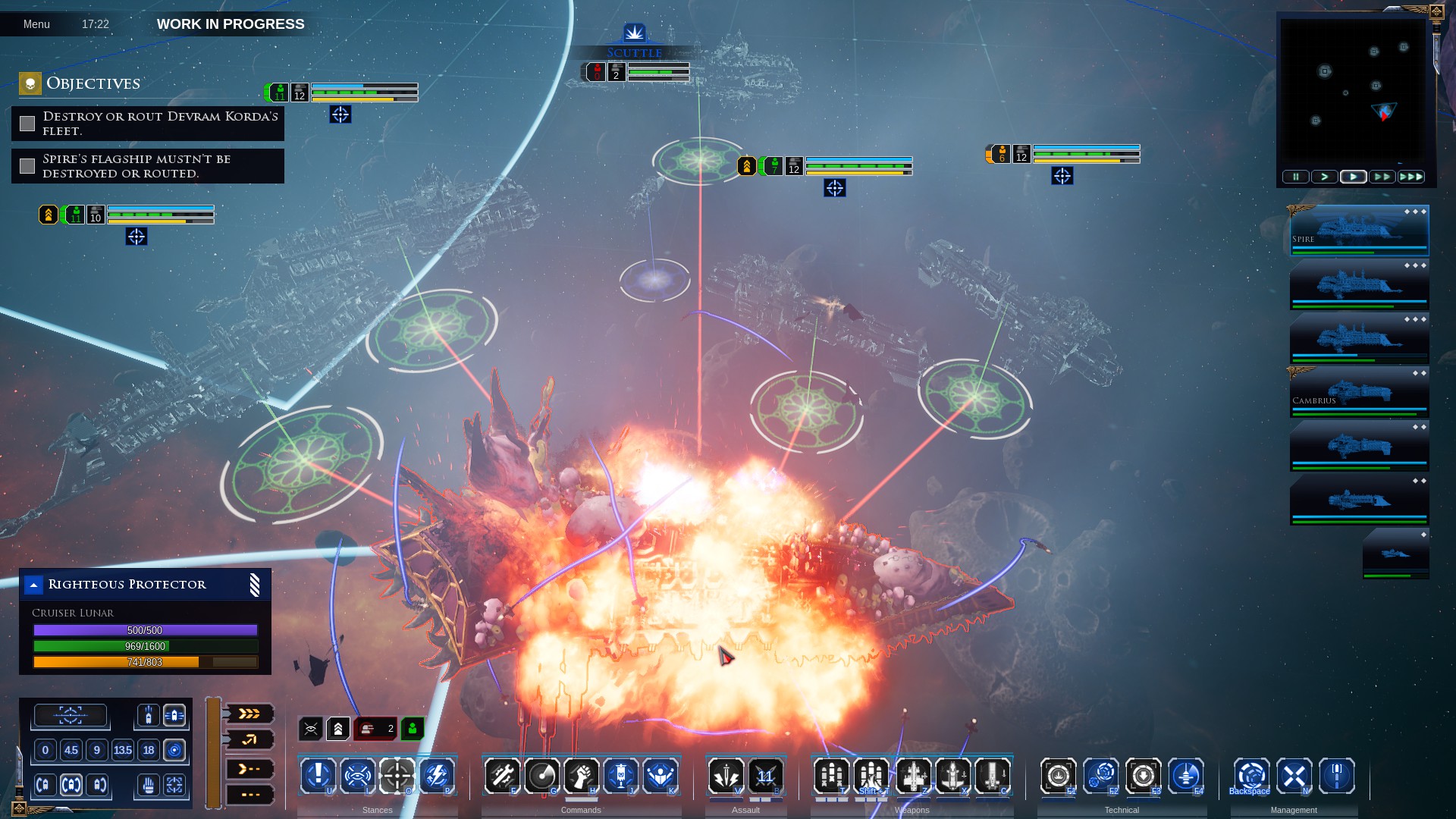 40k’s considerably vast lore is well portioned out, too. Each new faction encounter is preceded by a cutscene outlining their place in their universe. The history of the Necrons, the fall of the Aelderi, the birth of Slaanesh and the Eye of Terror, and the terrifying psychic effect of Tyranid invasions are all given due place. It makes for a great entry point, and I can see those familiar with the lore just soaking up how magnificent it is to see it all brought to life on such a grand scale.

What’s most surprising for a 40k game, however, is how convincingly Armada 2 pulls off human drama. The baroque excess of the tabletop games’ best fluff can easily veer into ham-and-cheese toastie territory when actual humans have to growl lines like ‘blood for the blood god’ out loud .This universe has always teetered on a fine line between gripping space horror and utter silliness, but restrained and confident voice acting lifted by a fittingly epic score make for some genuinely desperate feeling encounters. 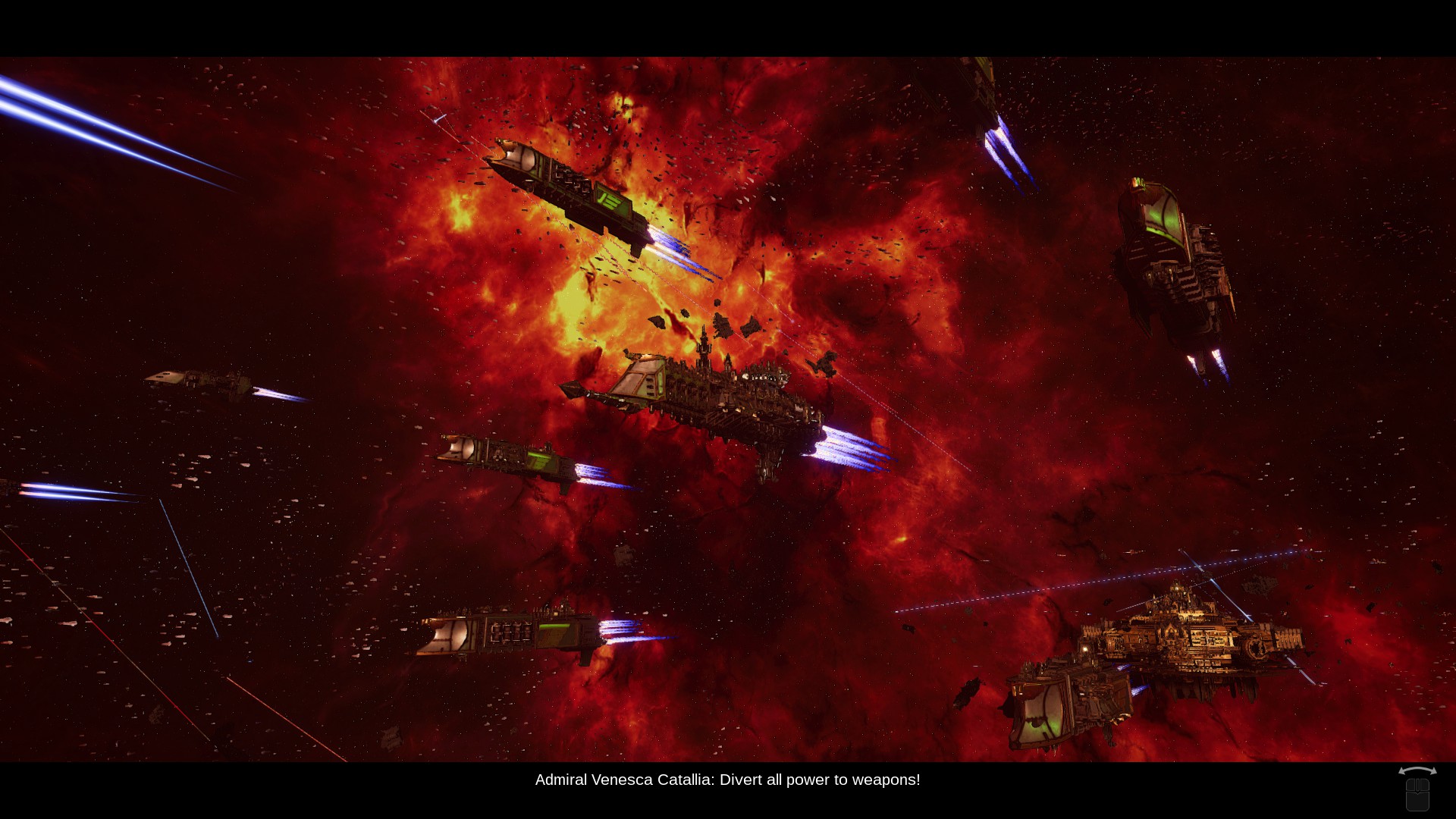 This is bolstered by noticeable tactical differences between the factions. I’m not entirely sure if Armada 2 has legs as a serious competitive multiplayer game, since so much of what I enjoyed from the campaign arises from asymmetric scenarios. The upside of this is how well the game captures the differing tactics of the individual factions, how those playstyles translate into personality, and how those personalities inform mission design.

The Aeldari, for example, are sneaky sausages. Fragile, but also extremely mobile and potentially deadly as a result. As the Imperium, you can’t outmaneuver them, and if you let yourself become disorientated or distracted by the graceful, dragonfly-wing sails on their vessels, you’re done for. The solution? Think, and play, like a stalwart imperial Admiral. Have confidence in your shields and armour, create a bulwark, focus targets, and swat them like flies. I often found myself having to hold positions tightly, weathering fire and trusting my vessels to take a few big hits in service of a larger plan. Times like this, it wasn’t hard to imagine the admirals at the helm of my ships gritting their teeth in the same way. 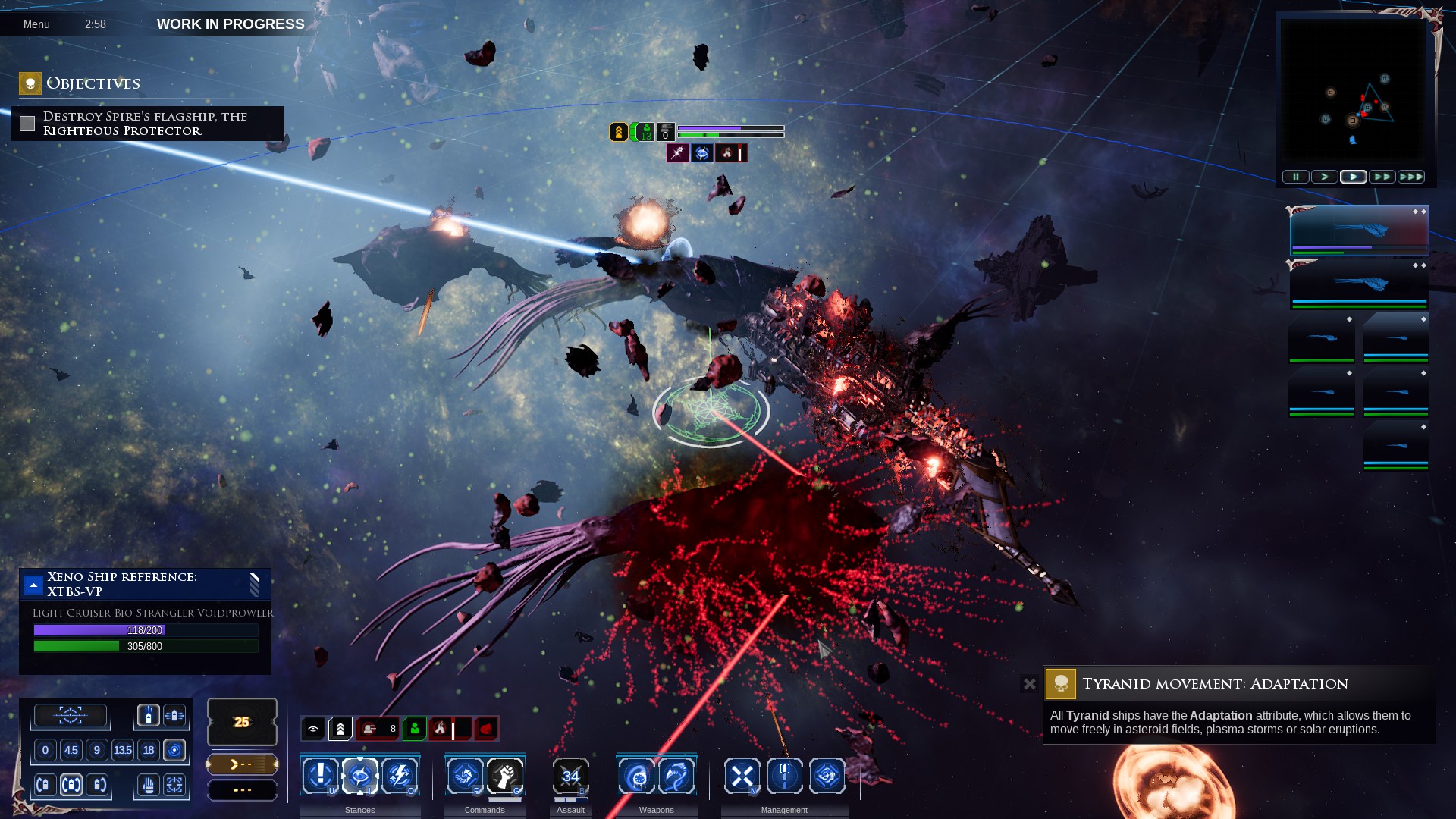 Such moments of high drama are somewhat diminished by a limp, if functional, 4X layer. Each turn between missions you can build and move fleets, take systems, upgrade planets for buffs, or upgrade your ships along a largely unexciting tech tree. I can see that some sort of strategy layer was needed, since the way ship damage carries over throughout the campaign provides an extra source of tension and continuity between battles. I seem to remember Homeworld pulling the same trick along a traditional campaign structure though, and I think that a string of missions, with optional side missions and upgrades from a hub à la Starcraft 2, would have worked just as well here. It’s not offensive, but it’s not especially exciting either. 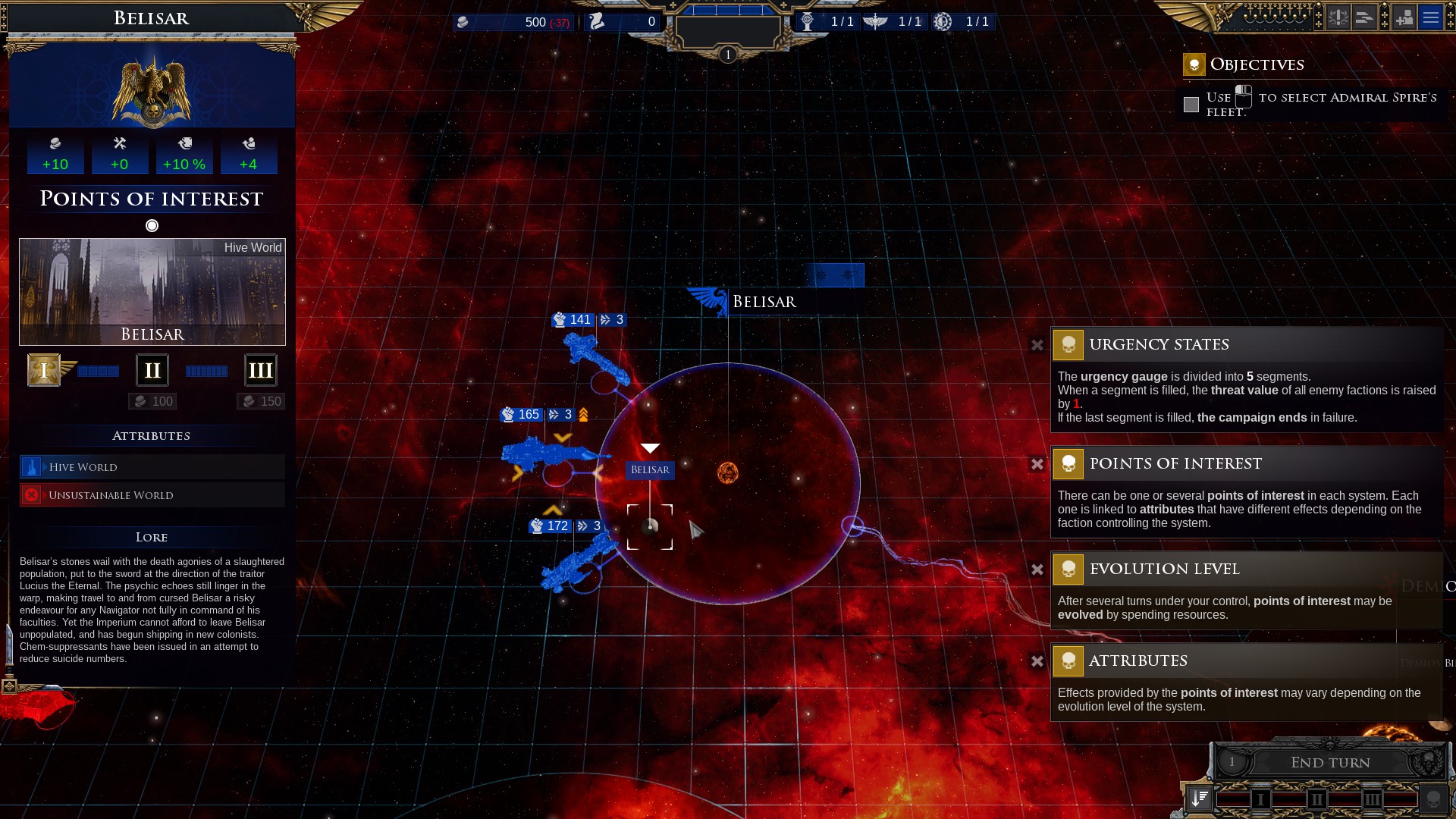 What is a bit rubbish is that the campaigns won’t let you pick exactly which ships you go into battle with. You can fit a maximum of three fleets in any one star system (two if the opponent has built a space station there), and each battle has a set point limit, which increase as the game goes on. So you bring three 750-point fleets into a 1000-point battle, and choose a priority order before you go in. When you go into battle, it takes the whole first fleet, 250 points worth of random ships from the second fleet, and nothing from the third. All this instead of doing the cool, smart thing I would have done, which is let you pick 100 points worth of ships from all three fleets. You can warp ships out part way through a fight, to be replaced by ships in the same system that didn’t get used. Maybe this randomness is the point, but I’m getting older by the day, and strategy war games add about forty years to my actual age and make me at least twice as salty. Such uncertainty makes me pull at my moustache in outrage, shout phrases like “Damn their eyes!”, and gnaw agitatedly at my mouse like a pipe stem. 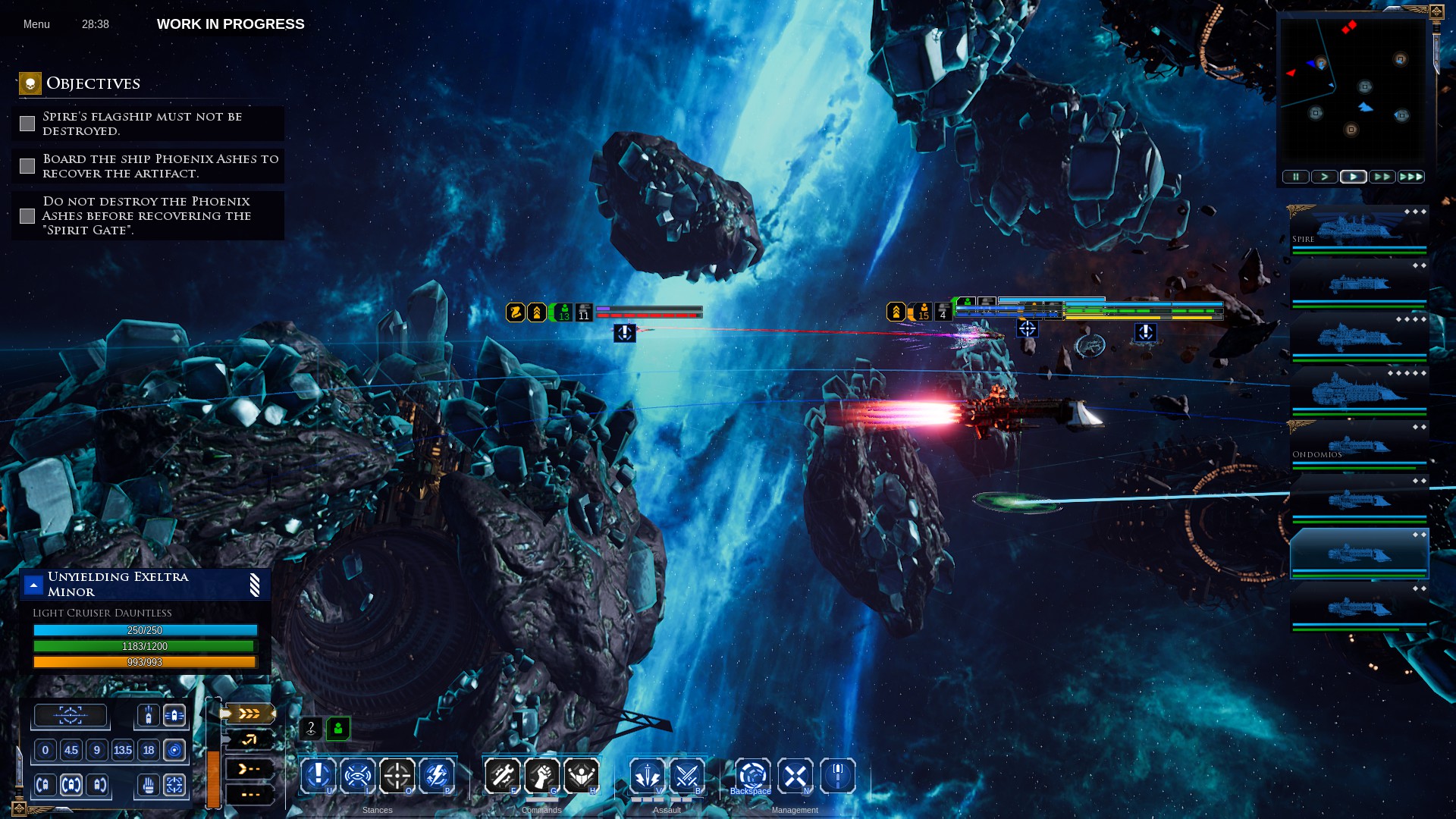 It does at least stop you relying on the same tactics throughout, mostly. I say “mostly” because from about the middle point of the Imperium campaign, I found I could utterly obliterate any ship from halfway across the map by spamming the squadrons of smaller ships your big uns’ can release. Oh look, it’s Abbadon the Despoiler, terror of the galaxy, and he’s getting clos...oh, no, actually, he’s dead, isn’t he? Killed by a thousand tiny shaving accidents. It’s a tad anticlimactic, to say the least. I will say that by the time I got to the Necron and Tyranid campaigns, each race played differently enough from the Imperium to put me on my toes again. It’s fair to see it as a tutorial campaign, then, even if it is has the most actual story and mission variety of the three. 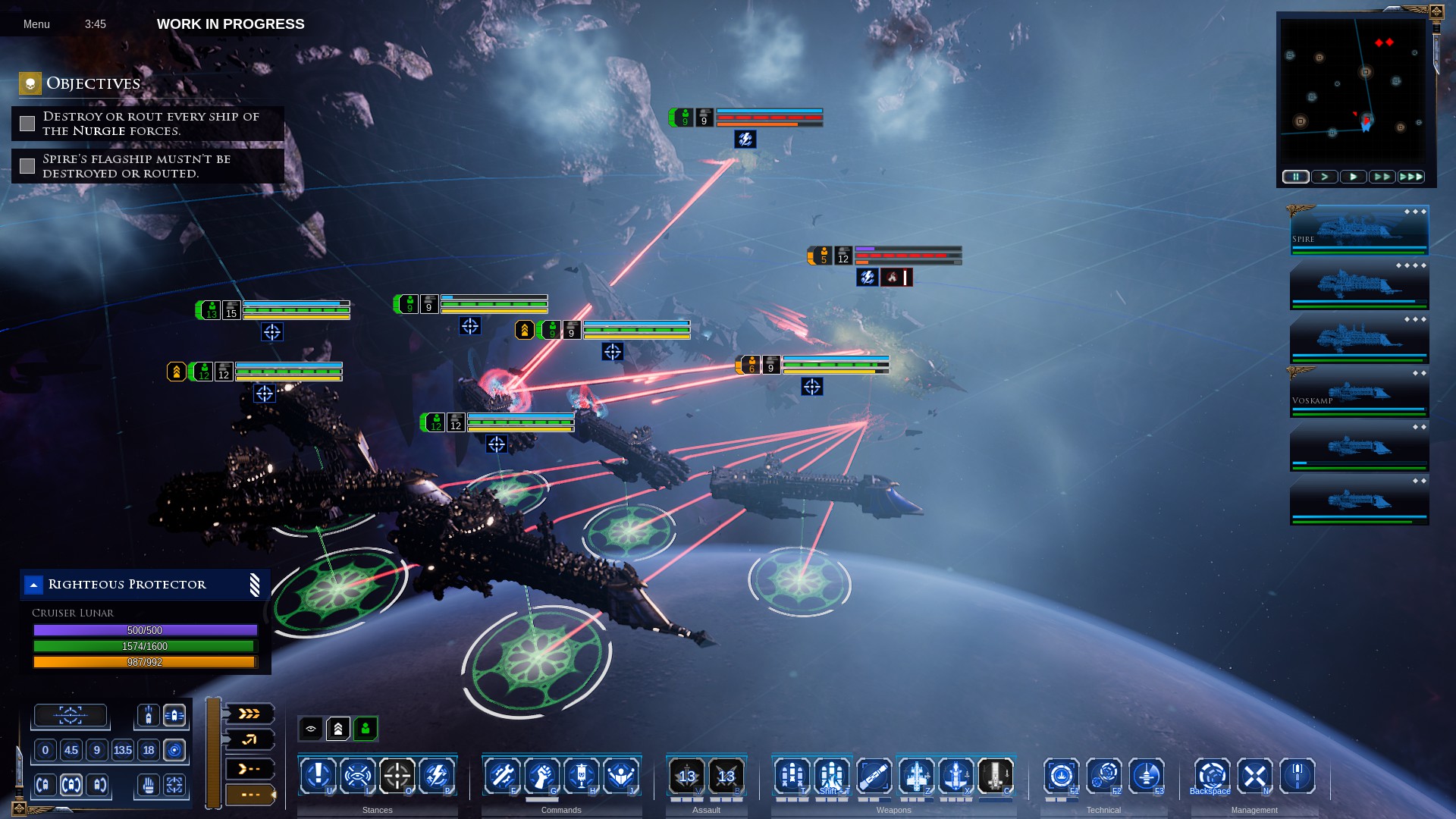 I’m going to shove in a few technical complaints here, because they’re worth mentioning. Battles are generally smooth, but I often knew exactly when a ship was about to explode because everyone in the universe suddenly froze completely still. Initial load-up times are abysmal. The menu you use to build ships in the campaign freezes for a few seconds every time you use it, and towards the end of the campaign, things would occasionally just stop responding altogether. If you’re not the patient type, I’d say these problems are noticeable enough that you’re better off waiting for a patch before purchase. 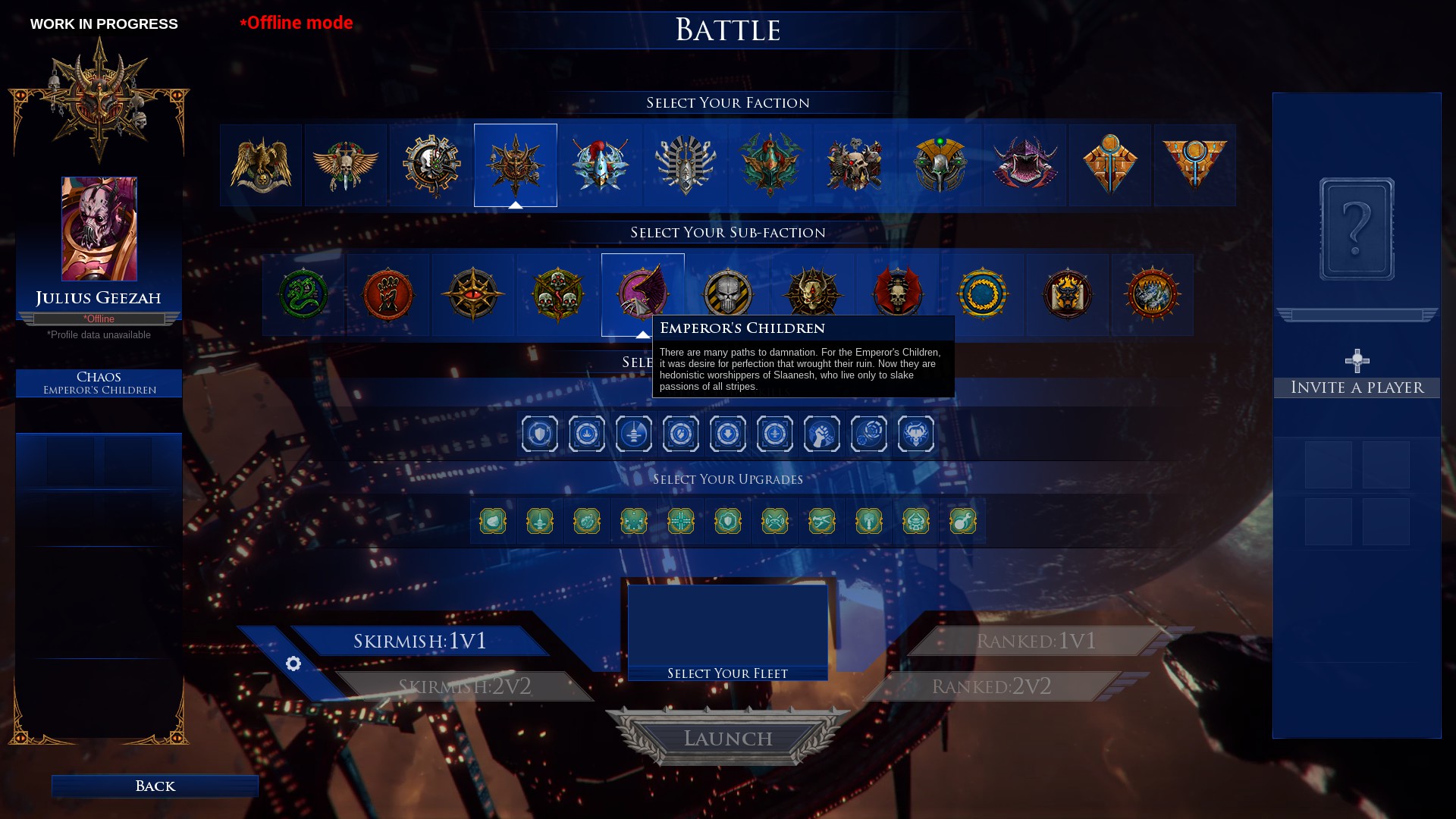 So, that said, is this particular endless space war worth enlisting in? If you’re looking for an incredibly deep 4x - no. If you’re up for some big, beautiful, dramatic RTS campaigns with weighty, satisfying combat, and don’t mind waiting for a patch to iron out a few creases - then yes. Either way, you should recommend this review to your friends, because I’m in talks with the RPS hivemind about doing that All the Fallouts thing but with the other 39,999 Warhammers. That’s roughly 526.3 tweets for every one of Nate’s, so the amount of good jokes should hopefully balance out.