Almost five years and a surprisingly good TV series later, and The Witcher 3 is still going strong; a surprising turn of events given how static the game has remained these past few years. Beyond a round of free DLC and two excellent expansions, Geralt Of Rivia's grand quest to become a cool step-dad and maybe settle down at a vineyard in the south of fantasy France remains largely timeless. Still, there's always room to tweak, tune and expand. This week on Modder Superior, we've got quality of life tweaks, re-textures, re-balancing and a Cavill-cade of faces fresh from TV.

Despite CD Projekt Red putting out an official tools, modders have found themselves limited in what they can easily do. Users also need to be careful when combining mods for your next playthrough, lest the game spit out a wall of script conflict errors and fail to load. Older mods (pre-GOTY edition) often have compatibility issues, and even later mods can kick up a fuss unless you have the Community Patch, which makes all editions of the game (assuming you own the DLC) equal. Note that this patch needs to be manually installed, as mod managers mishandle it.

Beyond patches, what you'll need for most of the mods featured below is the Witcher 3 Mod Manager by "stefan3372 and SullivanMcBlueberry". While it's tempting to use Vortex (official multi-game manager of Nexus Mods where most Witcher 3 stuff lives), its support is a patchy and can cause more trouble than it fixes. If you plan on getting at all fancy with the mod manager, you'll also want "AnotherSymbiote"'s Script Merger tool, which (mostly) automatically smashes files together to resolve conflicts. 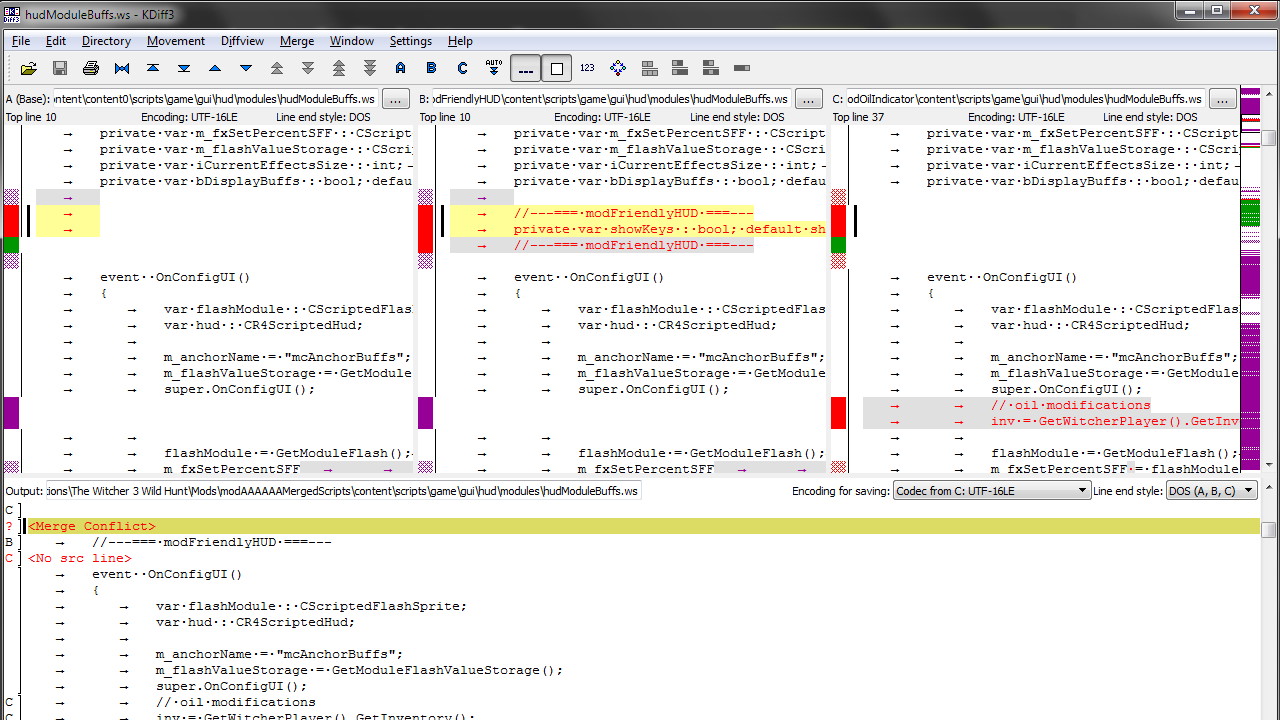 For more detail on all of this, I recommend at least skimming through Wasteland Ghost's Witcher 3 Modding Guide. How much you'll need the guide depends on just how ambitious you're feeling. Here's a few choice mods to tempt you to download far too much all at once.

Toss a mod on your textures

The Witcher 3 is still gorgeous - even more so if you've got high-end hardware. Still, there's always room for improvement. While probably a bit overkill, the Witcher 3 HD Reworked Project by "Halk Hogan" cleans up just about every low-res texture or rough 3D model in the game. There is some small performance cost and it's a hefty five gigabyte download (and multi-part install) but otherwise easy to set up and even easier on the eyes. As with similar texture mods, it perhaps goes a bit far on roughening up rocks, but mostly does a good job.

For all it size and scope, this is a doddle to set up. No mod managers or prerequisites needed. Just run the numbered Part 1, 2 and 3 installers in turn and point them to your Witcher 3 directory. You'll likely get more mileage out of this mod if you've got a 1440p or 4k monitor, but it's a more dramatic change than you might expect, especially when the camera gets wedged up near rocks or bricks. The mod also comes with an optional ultra-high graphical configuration mode, pushing the game to its visual limits. A nice extra, if you've got the hardware for it.

Witchering isn't easy. Here's a handful of little mods that, with a little alchemy, might breathe some more life into the game if you're looking for a smoother ride. 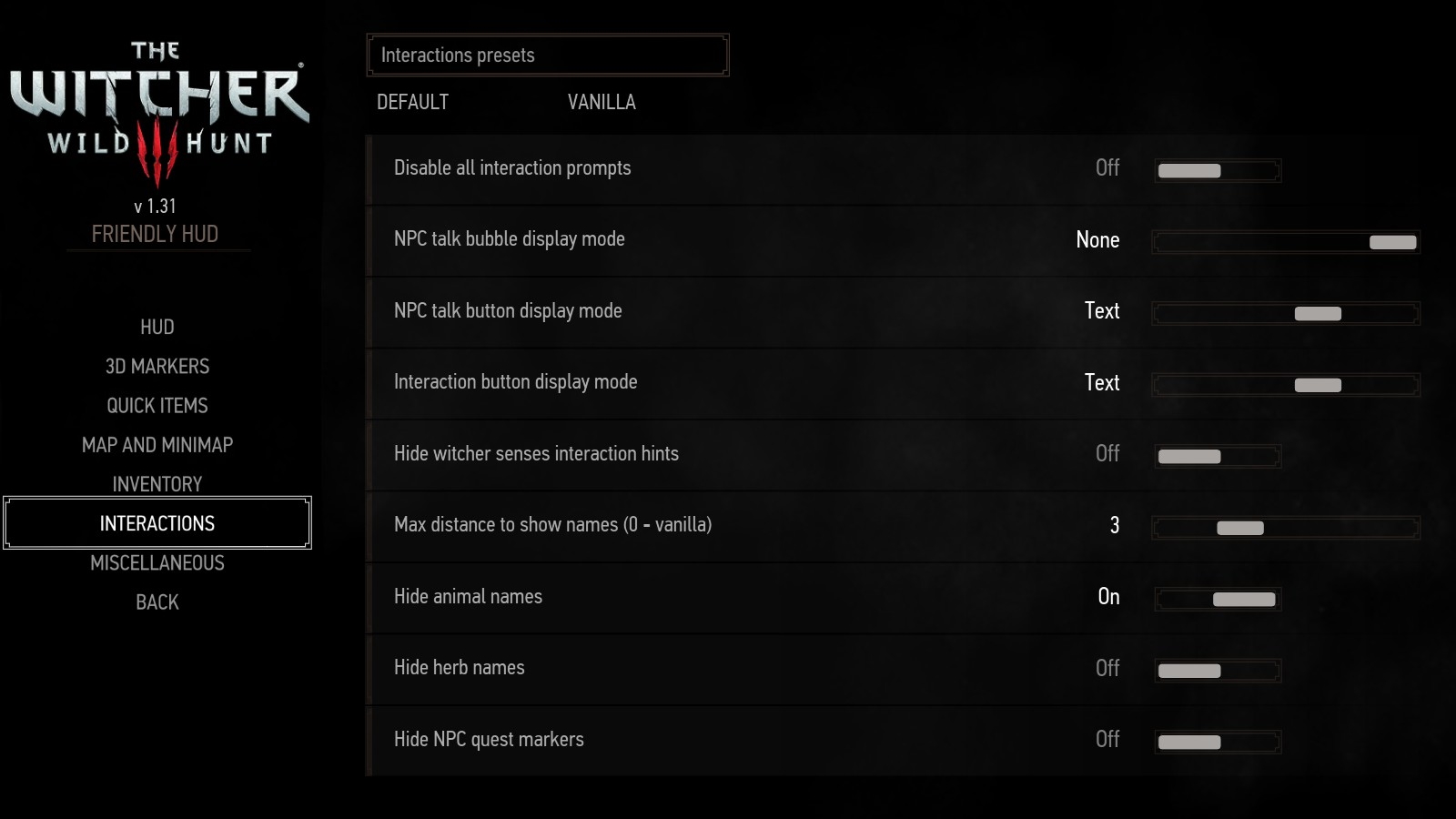 Friendly HUD and Friendly Stash by "Wasteland Ghost" are essentials if you're not going to be stacking mods sky high. What you get here is a highly customisable HUD with better functionality and some new QOL features like quickly switching between your crossbow and last used bomb. Friendly Stash makes your collected resources accessible from more screens, and lets you use Roach's ample saddle-bags as a mobile stash access point.

All Quest Objectives On Map by "Wolfmark" makes keeping track of available adventures that little bit easier. There's also an expanded 'Full' version that permanently adds merchants and other notable NPCs to the map once you've located them. Fast Travel From Anywhere by "JupiterTheGod" does exactly what it says on the tin, and lets you hop around to visited locations freely, so long as you're not in a fight.

Auto Apply Oils by "SheepDarkLord" is more important to me than any of the above, though. There's a lot of monsters in The Witcher 3 with a lot of specific weaknesses. This automatically equips the right sword oil for whatever you're facing, so long as you have it brewed. And one last does-what-it-says mod that any experienced player will appreciate is Jump In Shallow Water by "Zhior", which gives Geralt the superhuman ability to leap when submerged shin-deep. No wonder people are suspicious of his sort. 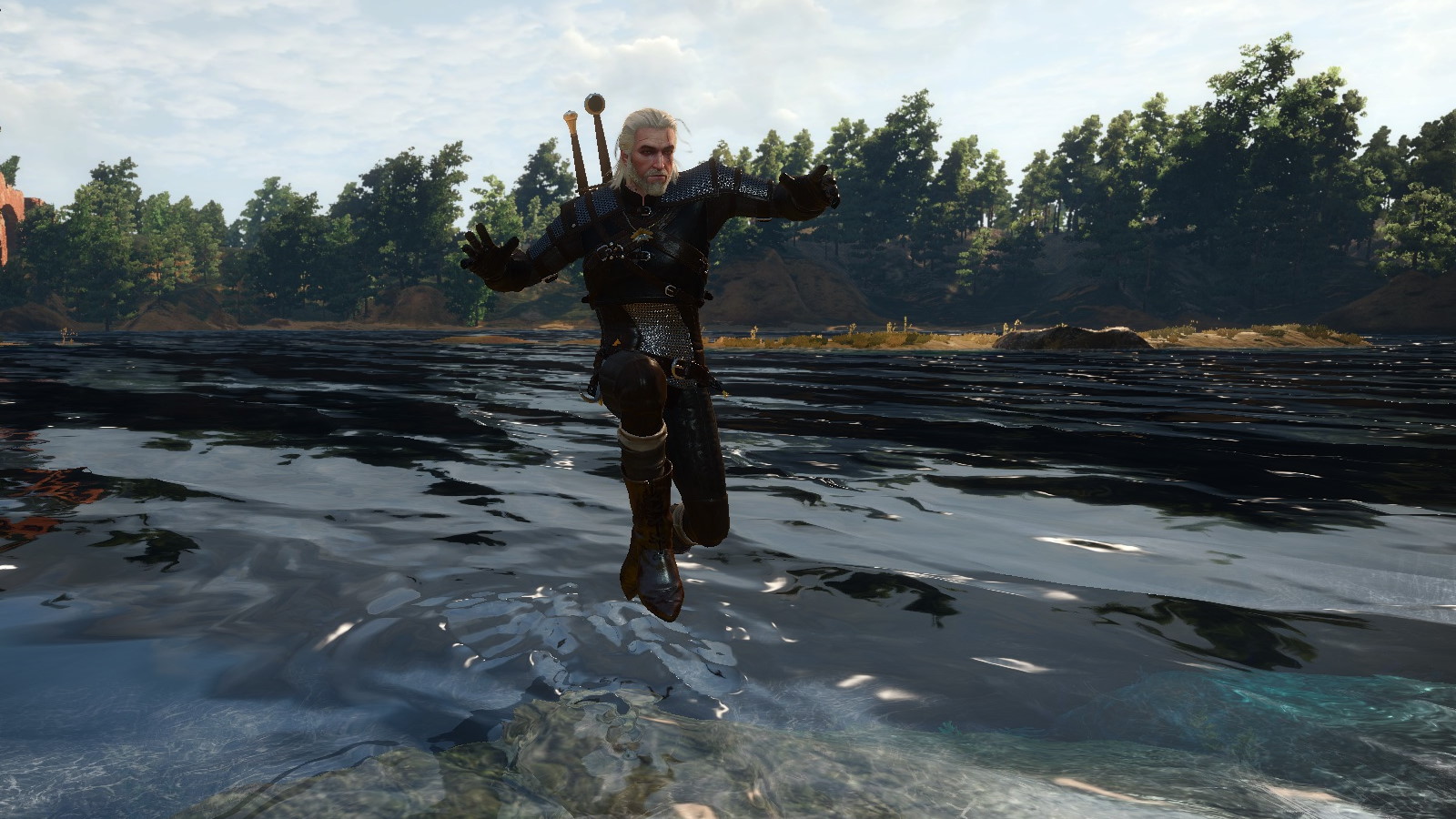 Reworks and overhauls: The Witchers re-code

No matter how good you are, returning to The Witcher 3 means you're going to be spending a lot of time stabbing monsters. Here's a trio of mods that change the fundamental flow of battle in a few interesting ways.


An intense boss fight recorded by "Acko" on YouTube, fine-tuned with FCR3.

There are few Witcher 3 mods with the same pedigree as Andrzej 'Flash' Kwiatkowski's FCR3, latest in his series-wide Full Combat Rebalance series. Normally I'm leery of people's attempts to completely overhaul an RPG, but Flash—a key gameplay designer on the second and third Witcher games—likely has a better idea of what to do than most. In fact, this is the least ambitious of the FCR series, acting less as a total rework of the combat and more of a subtle 'directors cut' style tuning, similar to Josh Sawyer's personal tweaks mod for Fallout: New Vegas.

Most of the changes FCR3 makes can be filed under 'common sense'. Abilities that were wildly over/under-powered are brought in line. NPC allies do full damage in this mod, and over-levelled enemies (marked with a skull symbol) no longer get huge stat bonuses in FCR beyond what their level should confer. There are also a couple of lore-based improvements, like Geralt's mutant eyes giving him natural night-vision.

It should go without saying that you're only meant to install one major mod like this at a time. The FCR3 mod's Nexus page also lists compatibility packs to make it play nicely with some popular QOL mods like Friendly Stash and Friendly HUD, I couldn't get them to launch in parallel without a wall of script errors. Your mileage may vary, though if you've a foolproof way of making everything behave, do share with the class.

Wasteland Ghost (ala WGhost81) has been working on Witcher stuff for ages, but was also instrumental in picking apart Firiaxis' XCOM: Enemy Unknown so the Long War mod could live. It's no surprise, then, that this goes the further than most Witcher 3 gameplay reworks. As well as re balancing almost everything and adding control panels to tune how levelling and progression works, more recent versions of this mod change combat to be entirely stamina-based. Not quite Dark Souls, but it's more demanding, as Geralt can't hack away all day long without a pause for breath.

Feature-wise, Ghost Mode is generous - not too surprising for the creator of the Friendly HUD above. There are several pages of customisable variables and features tucked away in Options/Mods/Ghost Mode in-game, ranging from tweaking level scaling to manually re-balancing the stamina-based combat system - although it's probably best to go with the Recommended preset at first.

While Ghost Mode does give combat a different rhythm - especially as signs now have to be weighed against your ability to stab and dodge - there's no massive fundamental changes. Attacks are still a little bit unpredictable and fights against swarms of monsters can get messy. Still, if you've played the game to death and want to refresh the experience, this is the mod to go with.

Is 'underhaul' even a word? Here's one for folk who want to adventure without worrying about grind and loot or faffing around with constantly upgrading gear. In Static World, there's no such thing as monster or loot levels. Released on January 17th by "DrawingDrag0ns", Static World does something I've thought more RPGs should try; removing levelling and stat inflation in favour of making existing gear more interesting. Stat inflation matters far less than whether your sword is sharp or unusually enchanted.

Static World is also meant to be used in conjunction with Master Training, Vigor and Alchemy Enhanced, all by DrawingDrag0ns, which altogether add up to something a bit more substantial, and geared towards making The Witcher 3 feel more like an action-adventure, rather than an RPG. Still, those wanting something simple will find Static World perfectly functional by itself. 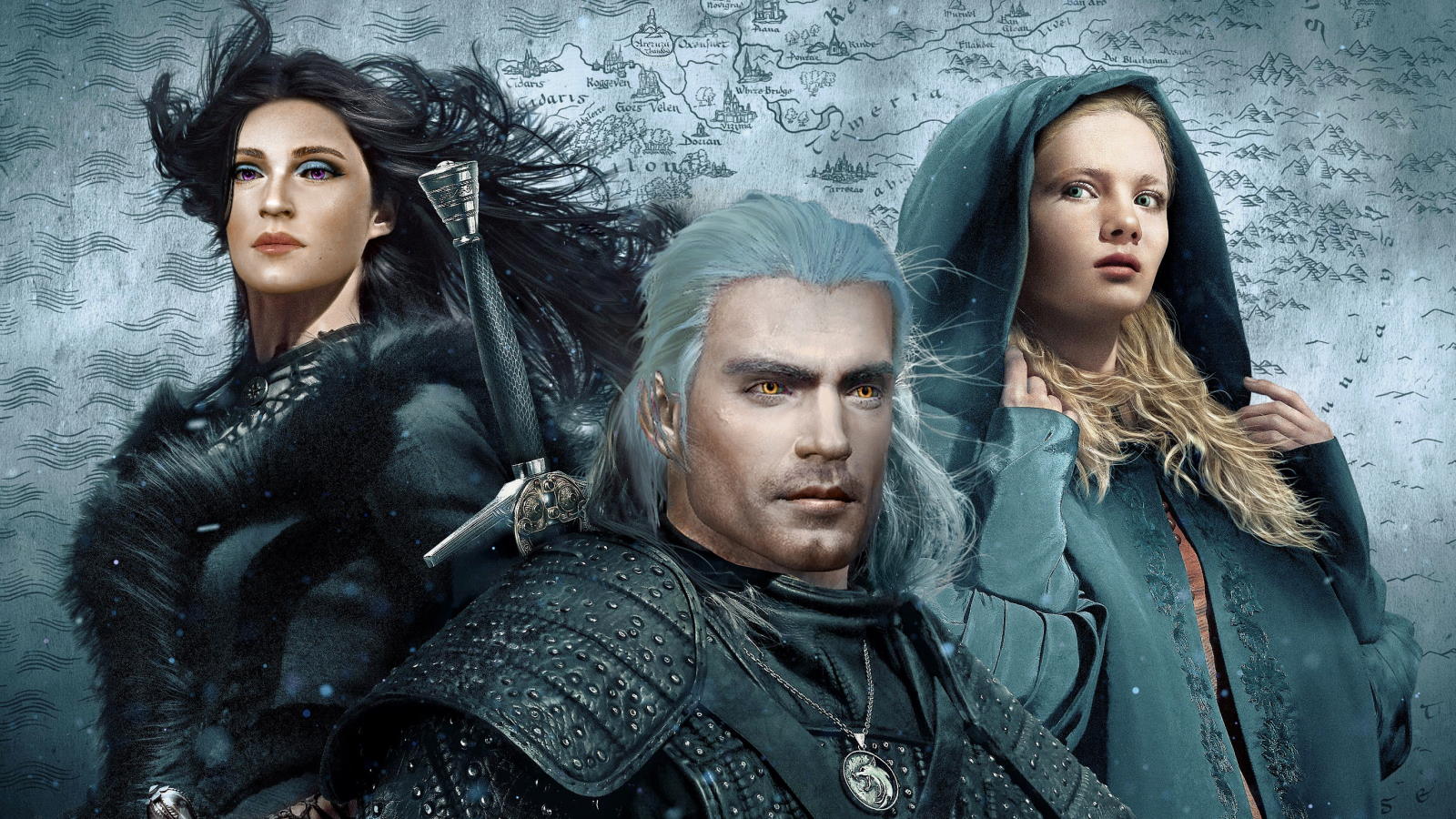 While not without flaws, the Witcher TV series has been a surprisingly good time. So much so that some modders have been inspired to import the TV cast's likenesses back to the third game. The models that most people are using right now are Henry Cavill & Anya Chalotra by "Adnan". While there's perhaps a little bit of Uncanny Valley at work in Geralt's newly cleft-chinned face, this mod's version of Yennefer (at least the made-up, 'mature' version offered) looks great. Well, so long as she's not brushing her hair. 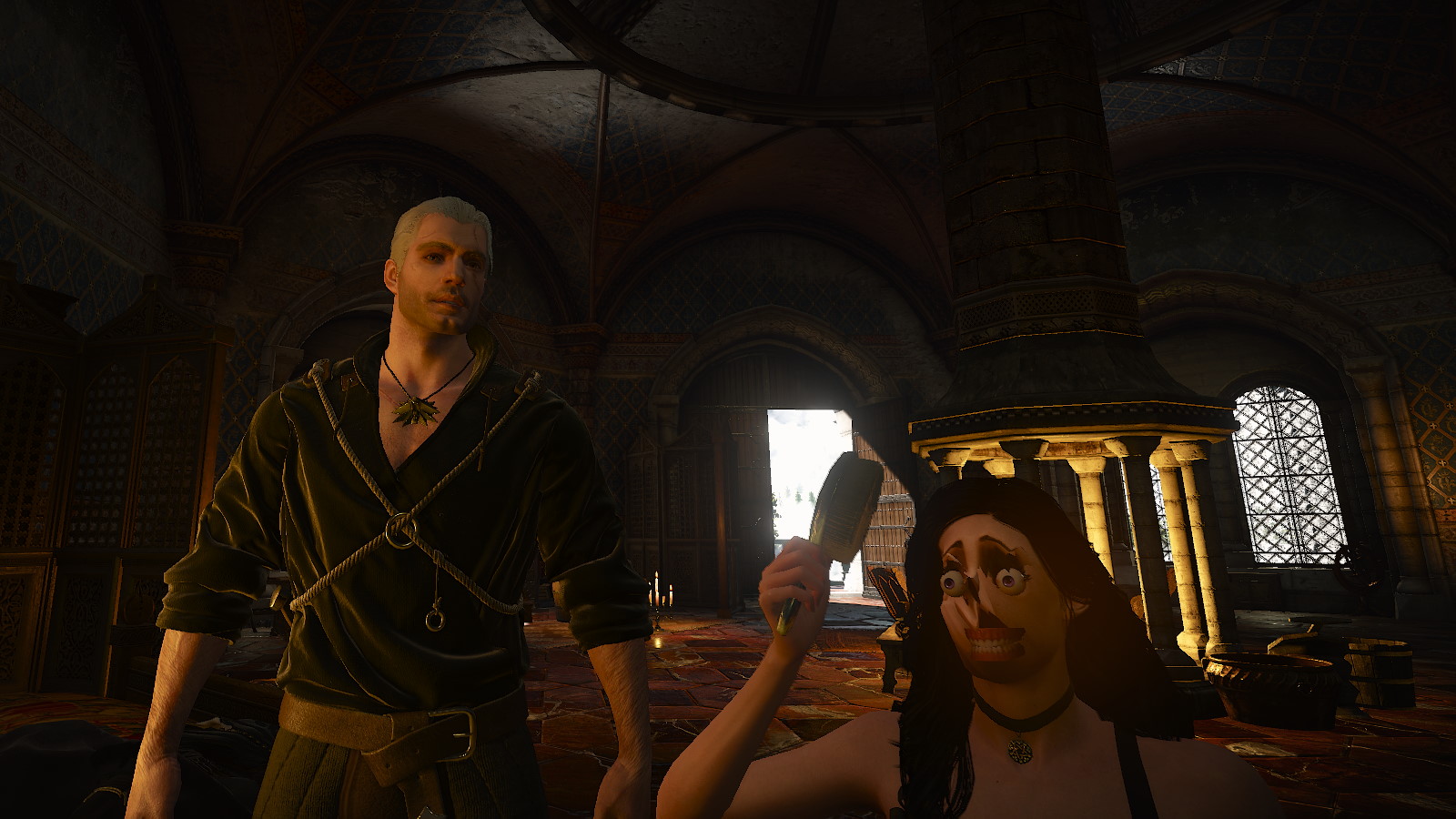 You'll have to take my word that she looks significantly less nightmarish in every other scene. Still, if I'm going to look at Geralt's mug for 60 hours, I'd rather it fit the feel of the game a little better, and several other artists have re-skinned Cavill of Jersey too. A quick search on Nexus Mods for 'Cavill' will give you a half-dozen options to pick from.

Personally, my vote goes to the awkwardly named Henry Cavill Game Like Textures by "JuhllyMattos". This skin weathers Cavill's formerly pristine features to better fit the older, more grizzled Geralt of the game. After all, this is meant to be him after a resurrection and nearing the end of his Witchering career. Similarly, this re-texture for Yen by "ReplicantPolice" splits the difference between her TV appearance and more mature version from the game. You'll also want the Yennefer Unified Textures mod, otherwise you may see some weirdly mismatched skin tones. 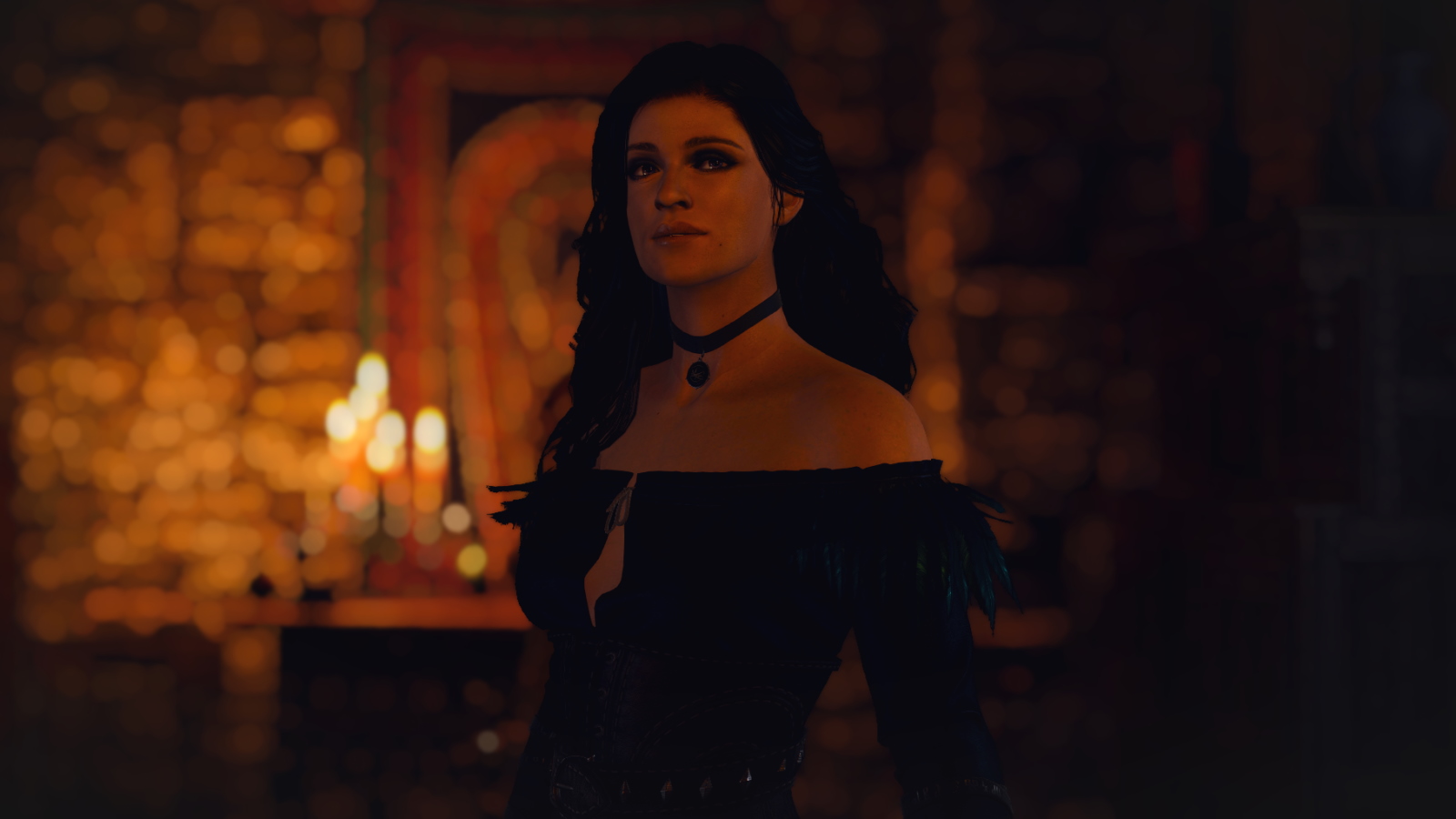 Of course, it's not all about the look. Modder "BoxManLocke" has produced a little mod adding Jaskier/Dandelion's all-too-catchy song about paying your Witcher to the game. The current version replaces the main menu and ending credits themes, and lets street musicians sing it as well. Simple enough, but there's another version in the works that promises a "more discreet/atmospheric" implementation. With a second season confirmed, I've got my fingers crossed for more bardic antics to port over. That, and a faint hope they cast Mark Hamill as Vesemir.

The renewed interest in the game thanks to the TV show seems to have set mod gears in motion for The Witcher 3 once more. Work on Ghost Mode continues, and I'm sure we'll see more efforts made to blur the lines between CD Projekt's interpretation of Geralt and Cavill's version. I doubt interest in the game will fizzle out any time soon, but I feel that if the Witcher 3 modding scene is to move forward, they'll need more in the way of community-authored tools. Fingers crossed - there's life in this old Witcher yet.