StarCraft 2 remains an RTS esports favourite nine years from launch, but its mod scene never got the love or attention it deserved. Despite Blizzard's support, an in-game mod browser, powerful editor and even a short-lived premium mod program, a lot flew under the radar. While some mods and standalone missions remain popular in the StarCraft 2 Arcade, we're going to be diving deep into the biggest, best and newest single-player campaigns available. Whether you're an RTS veteran or don't know what a Zerg is, there's something for you here.

The icing on the space-cake is that all of this is completely free. StarCraft 2's first episode - Wings Of Liberty - has full mod support, and Blizzard made it free back in 2017. Every one of these campaigns can be played start to finish, fully intact and without a scratch on your wallet. Impressive, considering one is a full modernised remake of the original StarCraft and its expansion.

Not to be too hyperbolic, but I consider Mass Recall the best way to enjoy the original StarCraft's campaigns. Possibly the biggest campaign for StarCraft 2, it's a comprehensive remake of the original game, its demo (which had its own missions), the Brood War expansion and a bit more besides. Or at least, it will be in the next few weeks. While previous releases of the mod included all six campaigns plus extras, the current version only contains the original three. The rest are coming soon, as they're currently being updated to include every enhancement that can be borrowed from Blizzard's own StarCraft: Remastered.

While StarCraft: Remastered did little more than polish up the original game (in the name of retaining multiplayer balance), Mass Recall tries to fill in the blanks inherent in porting a 1998 game to a 2010 engine. There are now difficulty settings (StarCraft's Normal is roughly equivalent to the sequel's Hard mode), and where lore-appropriate, Brood War units and expanded hero characters are available in the original game's missions. For the most part, the missions play similarly to their original incarnations, just with a far slicker interface, a slew of quality-of-life improvements, and the occasional new in-game cutscene. It's still StarCraft, but a subtly modernised version. 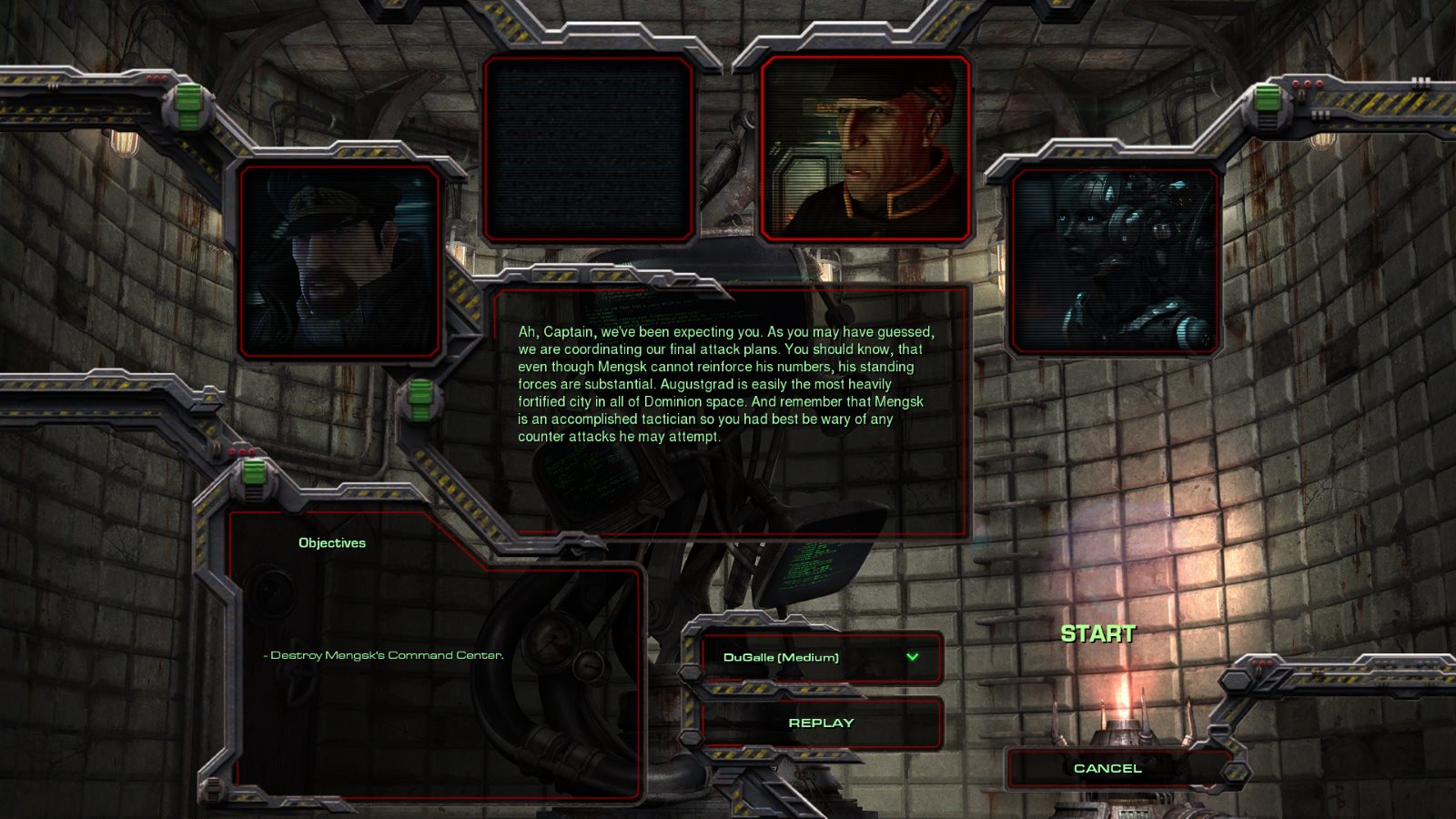 At its absolute most playful, some hero-only missions in Mass Recall are (optionally) playable as a third-person shooter. It's a bit rough and janky and not something the engine was made for, but it freshens up some short, otherwise dull missions. If any of that that turns you off, there's an options menu that allows you to pick and choose what enhancements to use. Don't like a specific unit's retro voice or model? Replace it with the StarCraft 2 equivalent. Remove the extra hero units, the early Brood War tech or any combination. I personally have everything turned on, but it's up to you.

As for playing Mass Recall itself, it's an interesting contrast against StarCraft 2's overtly cinematic campaigns. StarCraft 1's missions are far less heavily scripted, often giving you simpler, more direct objectives against an AI enemy that's designed to harass you with steadily escalating waves of units until either you push back, or your defences crumble. It's not really comparable to playing against human opponents (the AI seldom adapts to your strategies), but it'll teach build orders and micromanagement better than StarCraft 2, especially on those new, higher difficulties. 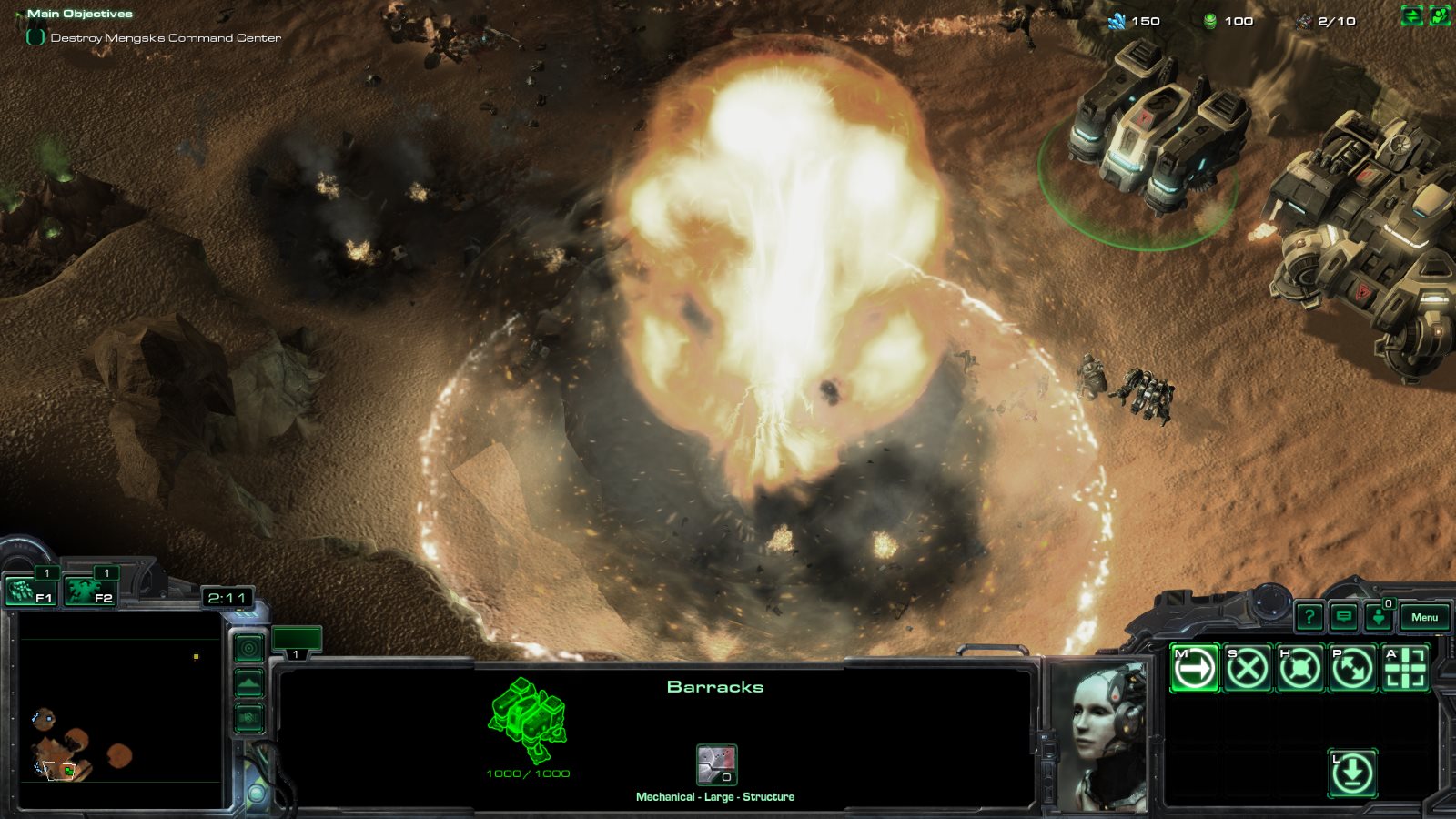 There's the occasional rough edge to Mass Recall, such as some slightly awkward dialogue portrait models, but for the most part they've gone above and beyond. Where appropriate, factions are (again, optionally) given their own unique unit and building models. To top it all off, when fully armed and operational, Mass Recall will also include Enslavers Redux, another StarCraft 1 user campaign, similarly remade. That alone adds another thirty missions to Brood War's seventy-ish. You're looking at weeks (if not months) of strategerising here - not a bad intro to the RTS genre either, and completely free.

Installation of Mass Recall is dead easy, and the instructions can be found on its SC2 Mapster page here. In short: Grab StarCraft 2 (either retail or the Wings Of Liberty free edition) through the Battle.net App. Download the SCMR installer, mission files and cinematics pack (highly recommended unless you like missing chunks of the story) and put them all in your StarCraft 2 directory. Run the installer, and when it's done you'll have a nice Mass Recall link on your desktop. Of course, if that's still not enough for you...


A passion project four years in the making from modder "DudkiSC2". This massive campaign was completed in late December 2018 and consists of 24 long, multi-phase missions featuring all three races. Annihilation attempts to mimic the style of StarCraft 2's campaigns, including some setpiece boss battles, and a lot of dungeon crawling with small groups of heroes. It has multiple difficulty settings, and in an attempt to imitate StarCraft 2's campaign tech-trees, you can pick which unit types are available to you on many missions. If there's one complaint I can level at it, it's that some of the writing is ham-fisted, with some one-note character personalities.

Annihilation's missions are all separate SC2Map files, which makes launching them a little fiddlier than Mass Recall. You can open them in the StarCraft 2 level editor and launch them from there. Alternatively, you can also make SC2Switcher_x64.exe (located in your Starcraft II\Support64 directory) your default application to open SC2Map files. Now you can launch any mission or campaign just by opening the SC2Map directly. Missions started this way default to Fastest game speed (as used in multiplayer), but a tap or two of the keypad minus key will slow it down some.


One of the more narratively impressive campaigns out there. The Antioch Chronicles is a fully voice-acted Protoss-focused campaign split into three episodes. The first two are remakes of StarCraft 1 fan-missions, but the third - Thoughts In Chaos - was made specifically for StarCraft 2. While I've only had time to briefly dabble in this trilogy (as with many of these other campaigns, it'll take days to play through), the mission design seems clever and varied. Still, be warned - if your Protoss game is rusty you may want to play Mass Recall to warm up. The original two episodes have no difficulty options, but the third does.

The first two episodes even feature StarCraft 1-style mission briefings, although the third episode (and its very swish campaign menu) tells its story through lengthy cutscenes book-ending each mission. While amateur voice acting is a minefield at the best of times, both delivery and the script are surprisingly good in this campaign, although I'm sure Protoss voice post-processing effects hide a litany of cheap microphone sins. While dialogue sequences don't drag on too long, there's a little bit of fanfic-esque 'And I was here doing this not far from this important canon character' exposition in here. Also lots of George Lucas-style screen wipe transitions. Still, a great excuse to dive deep into Protoss lore and work on your pylon strategies. 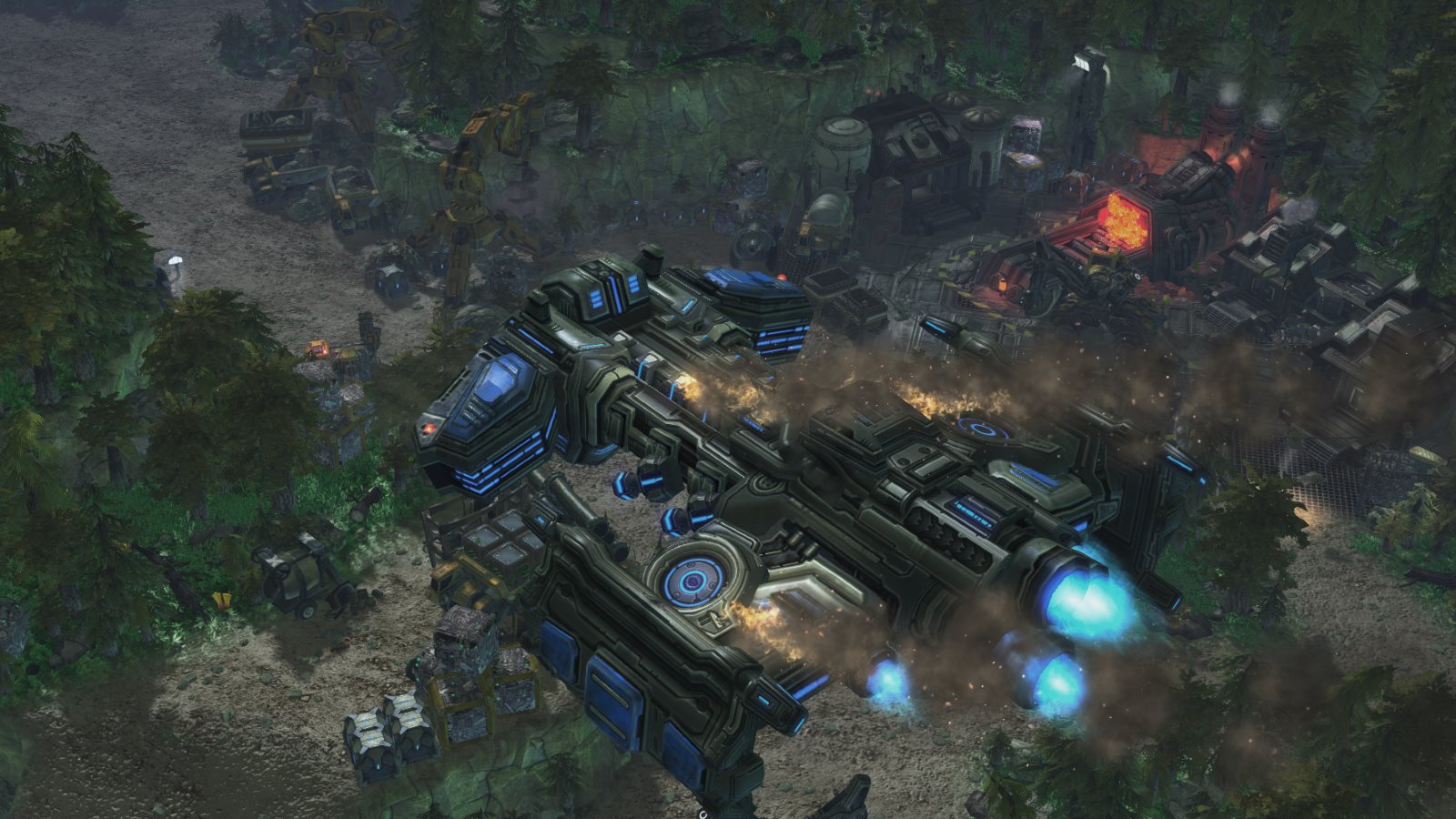 Odyssey has been floating around on the StarCraft 2 Arcade for ages, but is best experienced downloaded direct from SC2 Mapster. First debuting back in 2015, this very polished campaign finally wrapped up its first episode in March 2018. Each of Odyssey's fourteen missions are sprawling, complex things, sometimes split across multiple maps and almost always with multiple phases of objectives. While mostly similar in structure to StarCraft 2's missions, it has a few ideas of its own like rocks being usable as cover by infantry in some missions, or special custom units with clever new powers. As with most of the campaigns here, it also supports difficulty settings - Brutal mode lives up to its name.

Odyssey doesn't have much in the way of custom art, music or audio, but it does what it can with basic StarCraft 2 materials. It does stumble at a couple points - its overly self-serious story feels a bit too nebulous to follow and its character names are a bit My First Action Hero'y (Captain Harsh, Stryker, etc), but some serious thought has been put into its world-building. Some of the later missions also suffer from performance issues, although I'm not sure if that's due to bugs introduced by Blizzard through updates, or the sheer scope of the missions themselves. Thankfully, StarCraft 2's interface remains smooth and responsive even when the on-screen action chugs, but it does struggle a bit during some of the bigger set-piece battles between multiple factions.


It would be remiss to talk about massive StarCraft 2 mods without mentioning SC Universe, the Kickstarter-funded, World Of Warcraft-inspired pseudo-MMO mod by Upheaval Arts. Featured by Blizzard and found in StarCraft 2's own Arcade panel, just search for 'SC Universe' and you'll find the prologue missions, plus the game proper. It's a technical marvel, and a long game in its own right whether played in co-op or solo. The problem is that I just don't especially enjoy it. Unlike Mass Recall's third-person shooter missions, which are brief and amusing distractions, I feel SCU stretches its MMO-lite combat too thinly to make a full game. Still, it remains semi-popular, even though it never got a polished 'final' release - worth a look, especially with friends.

Also worthy of a quick shout-out is Perfect Soldiers, yet another thirty-mission monster split into three episodes. Don't let its first mission (set in an industrial sewer system) put you off, as they're quite tightly balanced missions - good, considering there's no difficulty settings here. Once more its writing is a little overwrought, and it makes do with 'vanilla' StarCraft 2 assets, but it has the occasional bit of clever new stuff. Metal Gear music is used especially well during a stealth segment, for example. It's among the older campaigns here, so parts of it may misbehave with present-day StarCraft 2, but I've not found any issues yet. 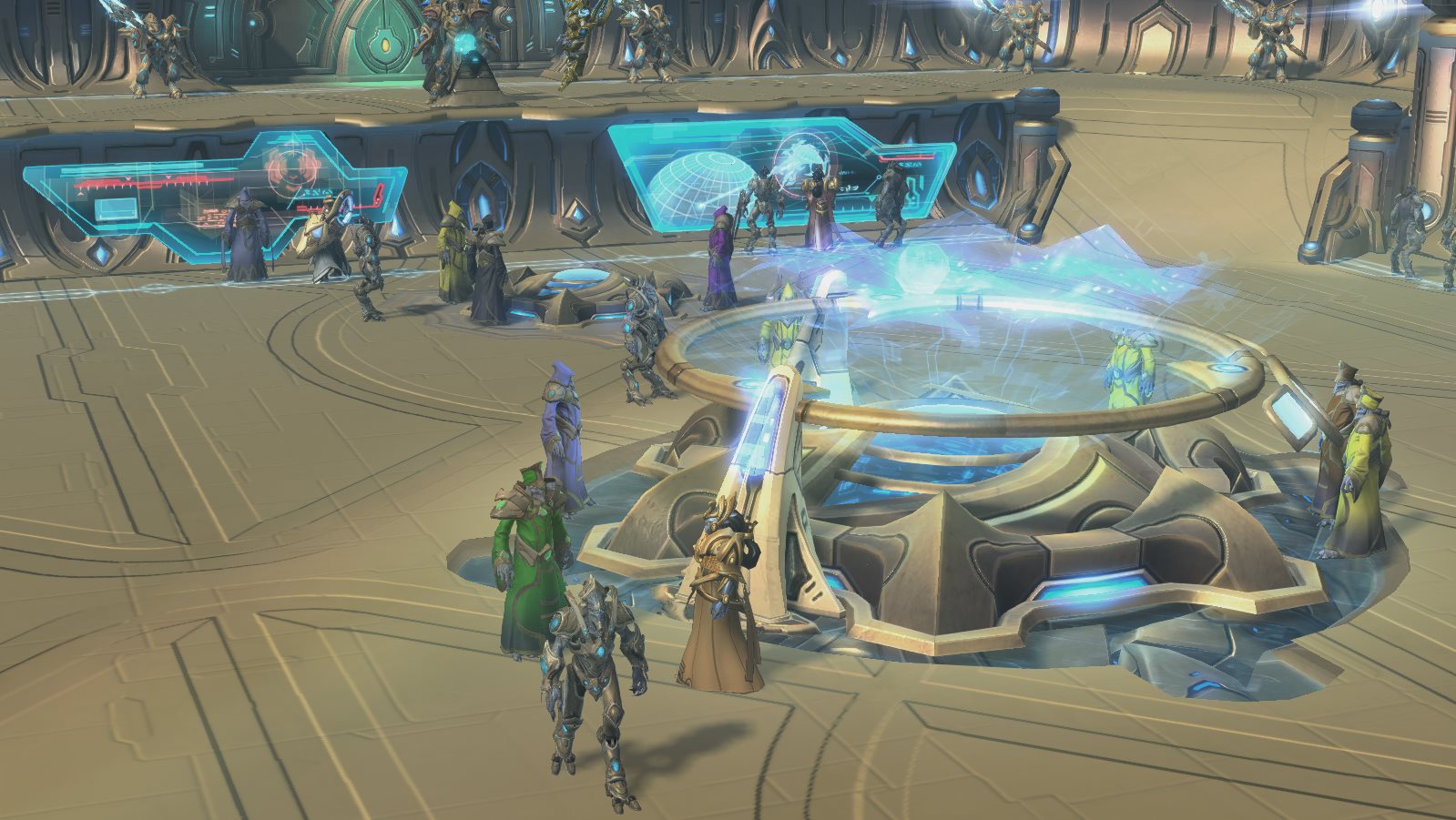 One final nod goes to Astray, a short but very polished story-driven scenario. While its single-hero combat isn't especially thrilling (although it does escalate into a nicely challenging pair of final boss fights), it's polished and tells a decent self-contained Protoss story, which manages to imbue its small cast of characters with distinct personalities despite a lack of voice acting. I'd love to see more in the vein of this, hopefully expanding beyond just having a single hero unit. With potentially mod-breaking updates to StarCraft 2 finally slowing down, I reckon there's a few big new stories still yet to be told, and The Antioch Chronicles and StarCraft Universe prove there's voice talent available too.

Just this handful of mods should take months to get through, but if you've got any more personal favourites to recommend, by all means share with us below. Sadly, some older mods are partially or even completely broken thanks to Blizzard's sweeping updates to StarCraft 2, a possible reason for the mod scene never quite finding the footing it might have otherwise. Still, 2018 ended with a flurry of modding activity - I'll be surprised if 2019 doesn't have a surprise or two left in store.