A couple of weeks back - when I also went hands-on with both Wolfenstein II: The New Colossus and The Evil Within 2 - I goggled up and gave the upcoming VR version of 2016's Doom a spin, as well as bearing witness to other folks' flailing and giggling in Skyrim VR and Fallout VR. Bethesda's triptych of 3D ultravision spin-offs are due before the year is out, with Skyrim only available on PSVR at least initially and Fallout and Doom only officially supporting HTC Vive, for obvious reasons. Their arrival is a pretty big event for a technology that so far has leaned far more heavily on brand new things rather than established names.

Curious about what this means for the technology and for Doom, Skyrim and Fallout, I picked Bethesda VP Pete Hine's brains about the whys and wherefores, and what it might imply for the future of their own VR efforts. Also below: my own quick impressions of Doom VFR [official site].

Let's do the impressions of my playtime first, as it offers context for some of Hines' comments. Unlike Skyrim and Fallout's VR rejiggers, this isn't the entire game redone with a new, wavy-touchy interface, but rather a new version of Doom, starring a different character who can transfer his intelligence into various military drones in order to switch to different areas and solve the occasional navigational puzzle.

However, the core concept is the same - shoot lots and lots of monsters, and use the 'telefrag' leaping melee attack to both insta-slay wounded enemies and build up momentum. Crucially, you don't get full, analogue-style first-person shooter movement: instead, it's the 90 degree rotations and click-on-the-ground-to-teleport-forwards movement style that's become something of a mainstay of VR games.

I must admit that I struggled with this, conceptually. If it looks like a duck and quacks like a duck, then it probably is a duck - but what if it doesn't swim like a duck? I was constantly having to check my impulse to use the Vive's thumpad to simply move forwards, and most of my deaths were because I inadvertently double-clicked to 'port to somewhere I hadn't meant to be, like right on top of a Hellknight.

I was working against my own muscle memories of Doom - but, clearly, I shouldn't expect to overcome that within the space of a 15 minute demo. I'm sure I'd get used to it in longer practice. The alternative to teleport-to-move, sadly, is nausea. And the benefits are what VR brings to the table: a sense of huge, wraparound scale, 3D, the freedom to look around using your actual human head and, effectively, to kill demons using finger guns. One of the things I asked Hines was whether or not this inherently makes Doom VR a better version of Doom. 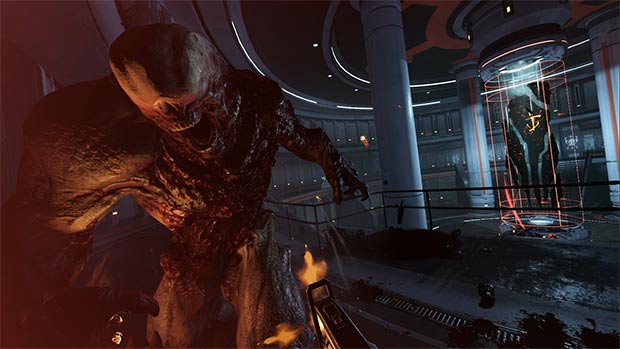 "I’m not sure we look at games we make as being 'superior' to other games we make," he countered. "DOOM VFR is simply different than DOOM. You aren’t the DOOM Slayer, you can’t move the same way, double jump, etc. Still, we wanted to capture the visceral and aggressive nature of DOOM in a way that made sense for VR. The benefits of that are that you get a VR game that truly feels like a game rather than just an experience. Being able to slow time with teleportation, transfer your consciousness into UAC robots to solve puzzles, and shooting demons with all the ridiculous guns feels pretty badass. You get to look up (literally) at 8-foot tall Revenant demons."

What about the controls, though, Why change 'em so much? "In the case of DOOM, that game was just too fast and aggressive. It doesn’t translate to VR. You can’t run around that fast and double jump and not throw up. It doesn’t work." He's adamant, though, that "teleporting feels good, and the combat is still a blast."

For the record, though they both have teleportation as a movement option for those with sicky tummies, Skyrim and Fallout VR will also offer free movement, with full gamepad support. "All those buttons will feel very familiar to anyone who has played a non-VR version of those games," says Hines.

For me though, the overarching question is whether these presumed VR big-hitters are happening at the right time. There are many arguments and counter-arguments about the health of the VR industry, whether the current tech is good enough or not, and whether it was ever realistic to expect these new and still somewhat experimental platforms to have found wider mainstream success by this point. If a headset had shipped with, say, Fallout VR last year, things might be a bit different. Do Bethesda believe that their gogglevision triptych could turn the ship around?

"Our focus is on doing things that we think are cool and that we’d like to play, and we think other people will too," says Hines. "We aren’t really focused on steering ships or guiding the industry. The cooler the games, the more of them there are, the better the experience you have on that platform, the more people will want to play on those platforms. It’s not rocket science."

Nonetheless, he feels Bethesda's VR RPGs are a bit of a landmark. "With Skyrim VR and Fallout 4 VR, nobody is doing a game that offers hundreds of hours of gameplay; entire AAA open-world games with so much content. So it gives folks a chance to play something they’re probably familiar with, or at least heard of, and see how VR can really change and evolve the experience of playing those games."

Doom, meanwhile, may be a separate fork of the base game rather than a straight adaptation, and I may personally have found the teleportation-based movement unsatisfying, but there's no denying that it's a technical tour de force for VR. So far it's a technology that's often (and not always fairly) been associated with reduced graphical wow compared to non-goggle games. Doom looked like Doom to me, not some cut-off-at-the-knees version - though given the fact they've also got that game running well and looking good on the Switch, there must be a few magicians on staff these days.

Question is, can we expect to see them work similiar juju on taking other Bethesda games to VR - looking at you, Dishonored, Prey and Evil Within - or does that hinge on Skyrim, Fallout and Doom VR doing well enough in an uncertain market?

Unsurprisingly, cards are kept close to chests here, but Hines does let on that "It’s something all of our studios are looking at and talking about as far as projects they’d like to do." The focus for now, however, is on "what’s coming out this year as opposed to some point down the road."

Doom VFR is due for release on Dec 1 and Fallout 4 VR is due Dec 12. Skyrim VR is currently only due for release on PSVR, though rumour has it that it'll come to PC later. If you can't wait until then, find something nifty to tide you over from our round-up of the best VR games for PC.