I'm not a big one for early previews myself, but having played the demo for Beyond A Steel Sky, the new pointy-clicky 3D adventure game from Revolution Games, I will concede that it was an hour and a half of my time well spent on puzzles and robots and hacking.

Beyond A Steel Sky is set in a sort of Mad-Max-meets-cyberpunk dystopian mash-up from Charles "Broken Sword" Cecil, and famous comics artist Dave "Watchmen" Gibbons. The game's traditionally rubbish, genre staple name is actually a hangover from the game to which this is a sequel, Beneath A Steel Sky, where gruff everyman Robert Foster and his AI robot pal Joey freed a city-state from the clutches of its evil AI overlord. Now, years later, Foster is dealing with the aftermath. 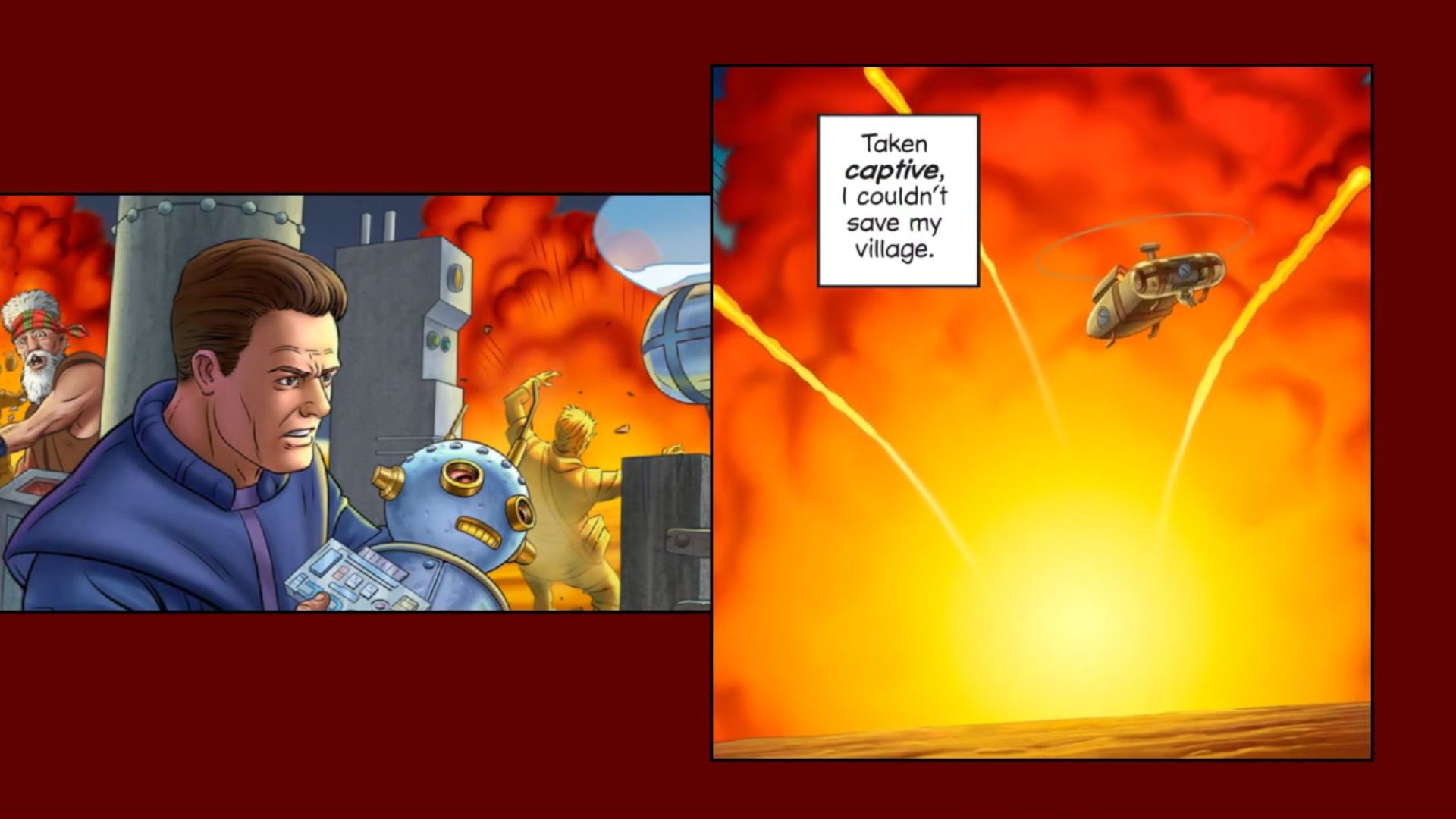 That aftermath is pretty predictable, I think. The preamble catches you up on the plot of Beneath and sets up some of Beyond (the preamble is... lengthy, and takes the form of a comic strip). I'm pretty sure even the most technophobic rube, on witnessing Foster telling Joey the robot to just "make everyone happy" before leaving Union City, ostensibly forever, would sagely remark "Ye fucked that up, lad," without even removing the ear of corn from their mouth.

And as it turns out, by the time you rock back up again, Joey has apparently disappeared, the citizens praise him like some sort of god, and the city is ruled over by a council of five extremely suspicious people, each responsible for one aspect of life. "Comfort" covers custodial duties, for example. "Wellbeing" sends people round to check on you if you take too many days off work. That sort of thing. Also, children are being kidnapped from the surrounding desert and smuggled into the city by night. That's also a thing. 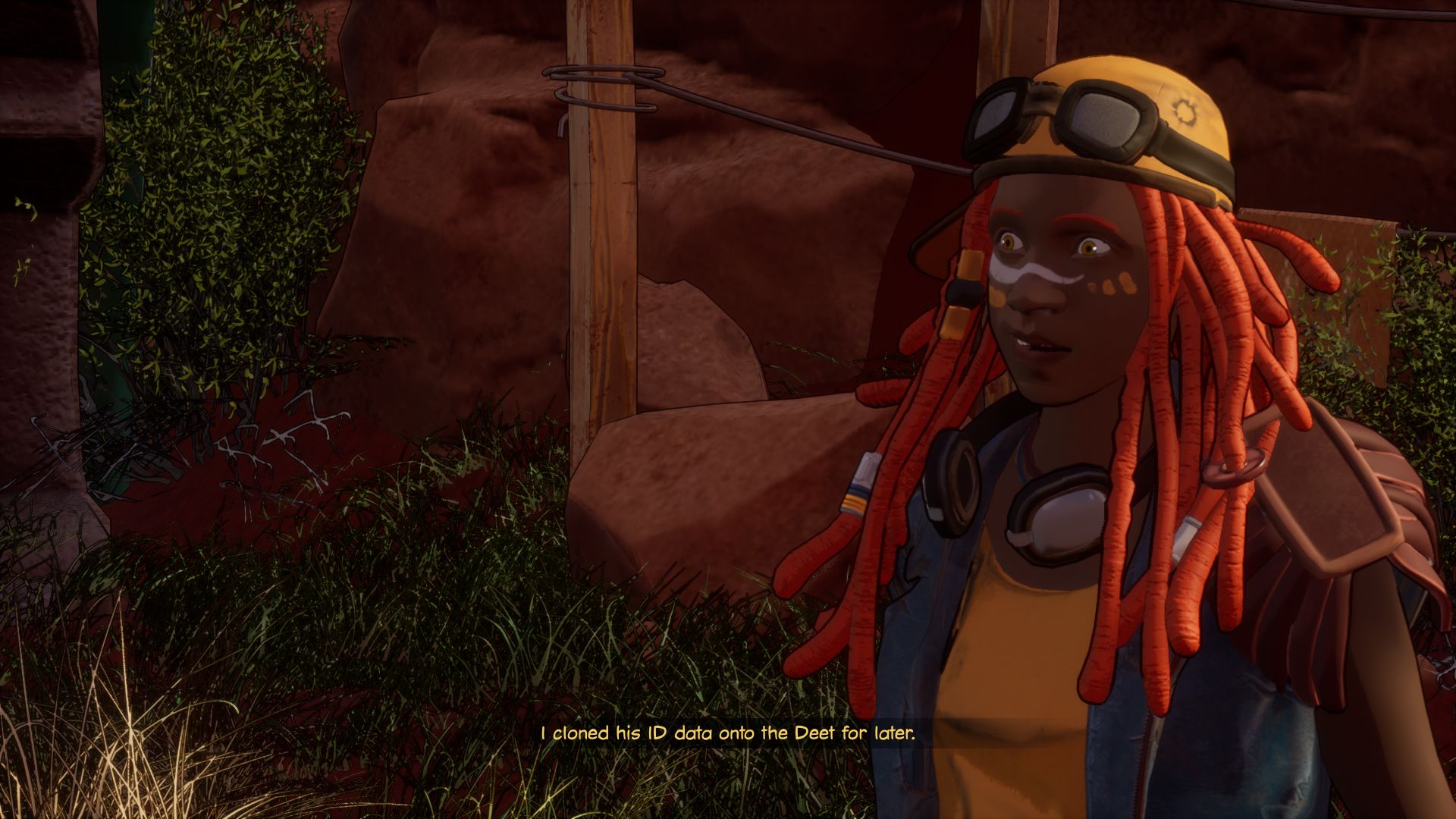 I should say from the off that this was a very preview-y preview build. Beyond is currently sitting on Steam with a "coming soon" release date, and I hope they give themselves plenty of time before locking a firmer date in, because the animation in particular is clearly a work in progress. This game is 3D, with a distinctly Telltale or Borderlands kind of look (or, I suppose, those games have a distinctly kind of Beneath A Steel Sky look), which does make it more fun to run around the different areas. But it also means more can bugger itself up.

One character, a cheerful delivery driver, demonstrated tremendous thigh strength, requiring only that his chair be 6 foot away in any direction in order to take his ease in mid air. Others treat floor level as a general suggestion, rather than a hard rule. Fun as it is to watch Foster occasionally float across the floor instead of walking, I can't put my hand on my heart and say that Beyond A Steel Sky is ready for it's debut ball just yet. 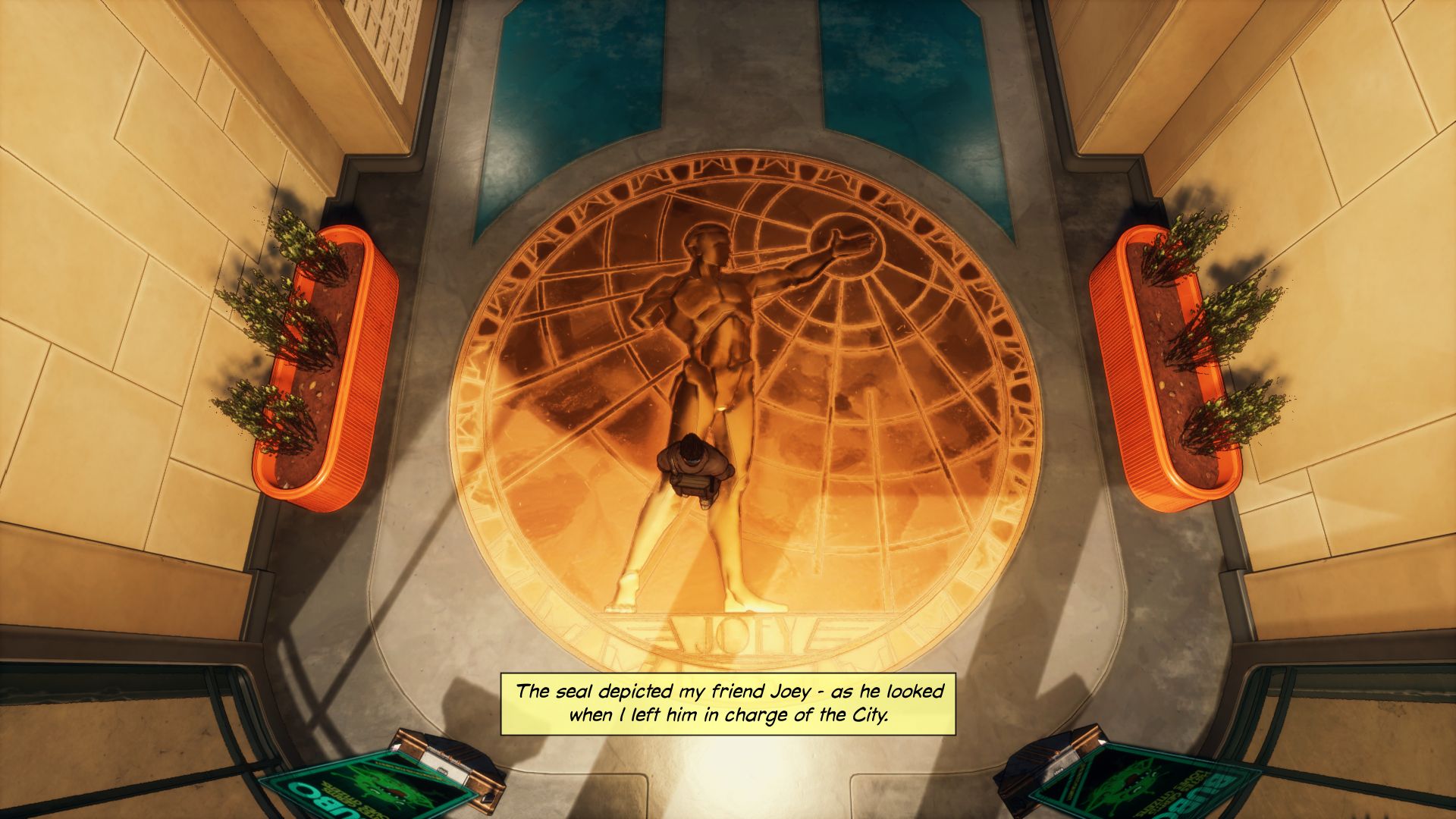 The dialogue system is also a bit opaque to navigate. Talking to characters brings up yer little word bubbles with potential topics, and I've worked out that a little green arrow appearing in the corner of one means you've learnt something that has opened up further options in that topic. But some bubbles appear yellow and some white, which I think relates to how important they are to the tasks you've got on the go - and yet they seem to switch around without my having really done anything. And while characters can prefix some things with "I already told you-", you do end up in little conversational loops sometimes.

But those (fairly substantial, I suppose) niggles aside, Beyond A Steel Sky did some very good things. The characters were fun and often genuinely funny, most especially the robots, who all have that curious quirk of being self-aware and having personality, which is a terrible thing for a creator to do to a robot. The puzzles were hard enough to be satisfying and make me feel like a smarty pants, but logical enough that I didn't need to use the walkthrough provided for thicky journalists. Most importantly though, they were so imaginative that solving them wasn't a chore - a means to an end, where the end is usually a further puzzle - but a joy in itself. 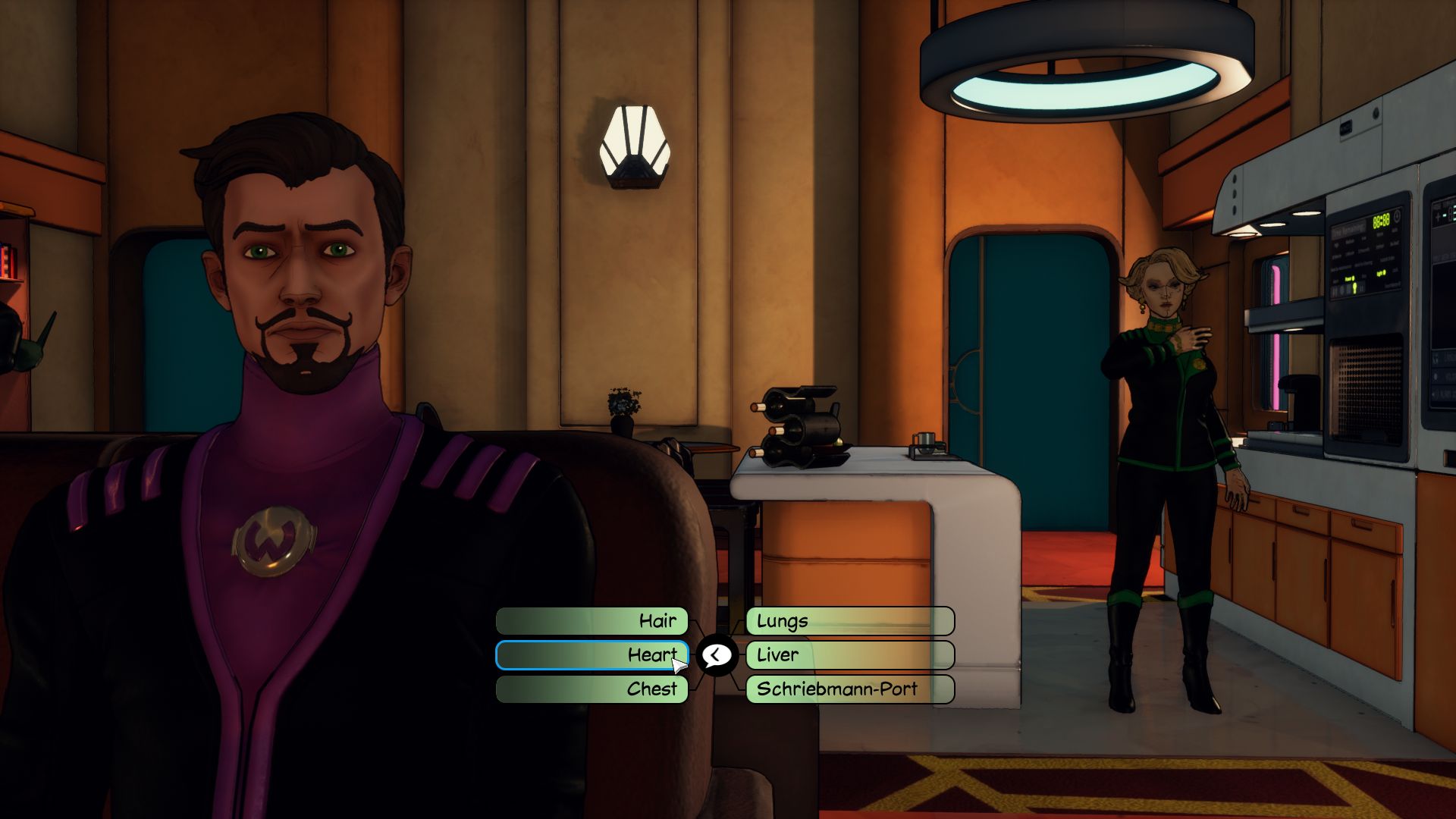 One puzzle involved getting the power cell out of the back of an old recycling robot. He sounded a bit like Ray Winstone, complained about the new model robot floating around yonder, and when I asked if I could have his power cell he refused, because it sounded like dying to him, and he didn't want to do that. But I had to steal his cell anyway, because I needed it for the aforementioned delivery driver. There are little bits like that, that make you consider what you're doing even as you haven't got much of a choice about doing it. But it didn't make me feel disempowered as a player, it just made me think about the context of the world a bit more.

And not just that! The actual mechanical bits, the metaphorical turning of the jigsaw piece around to see where a piece fits, are just as good. One puzzle involves having to convince an interviewer (who looks like Waluigi would if they ever make a sequel to the Super Mario Bros. film) that you're a dude called Graham, because you've stolen his identity. And since you might not know all the answers to all Waluigi's questions, Graham's wife stands off to one side, furiously pantomiming the right responses as best she can. 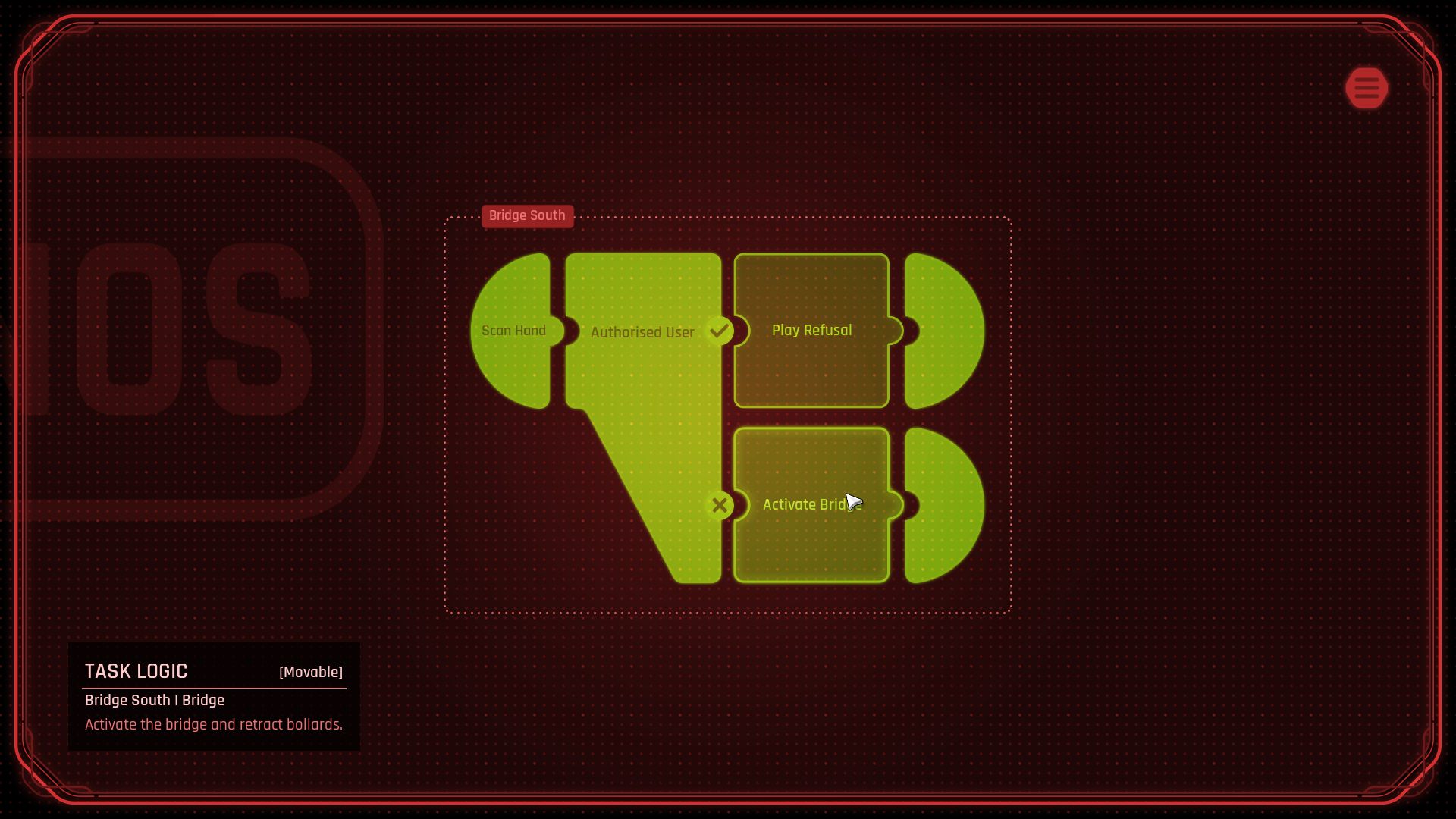 But the pièce de résistance is the scanning tool, which you get from a teenaged trader outside the city walls (after first luring a vicious carnivorous bird with some out-of-date sausages, natch). You can use it whenever you like, and it'll give you access to automated systems so you can reconfigure their logic boards. In some cases that means turning a one-per-person vending machine into an unlimited fizzy drink dispenser, or turning on the sprinklers because the flowers outside really look parched. Other times it means patching into two or more systems at once and swapping things around, so a projection of a plant displays a tracking map instead.

It's simple, and probably not revolutionary, but it feels so creative. It really seems like you're doing something, you know? And while I can't tell you how big the game will be, or if the rest of the world is as interactive and interesting as the three areas I got to run around in the demo, I can tell you I do really want to find out.

You can wishlist Beyond A Steel Sky on Steam now.