If you click on a link and make a purchase we may receive a small commission. Read our editorial policy.
Developer: Bloober Team
Publisher: Bloober Team

The best thing about Blair Witch is that the main character carries a knock-off Nokia phone. I spent the first 15 minutes of this horror game fiddling with a 1990s mobile, calling a pizzeria, snooping through old texts, and collecting tiny squares in an off-brand version of Snake called "Cobra Masters". It's such a good facsimile of the crap phones of yesteryear, I found myself completely ignoring the opening to this detailed game world. The leaf-strewn forest floor, the puddles of stagnant water, the dirty baseball cap of a missing child. There is an abundance of craftsmanship on display in this spook 'em up. But I would later discover that it never comes together in anything truly frightening or thought-provoking. Oh well, at least the existential dread of Snake's infinitely looping arena remains compelling.

This is a spin-off of the horror movies of the same name, ghost stories about people becoming lost in the woods with an otherworldly, hostile presence, and trying to record that creepiness on camera. This time you're a man called Ellis, who is joining a police search for a missing child. He gives off serious vibes of James Sunderland from Silent Hill 2. Not just in his attire (green jacket, faded jeans) but in his behaviour too. Flashbacks hint at an abusive relationship with his partner, and other psychological troubles. He's a wreck, and in the early moments, not someone you exactly feel a great deal of sympathy towards. But don't worry, he has a dog. 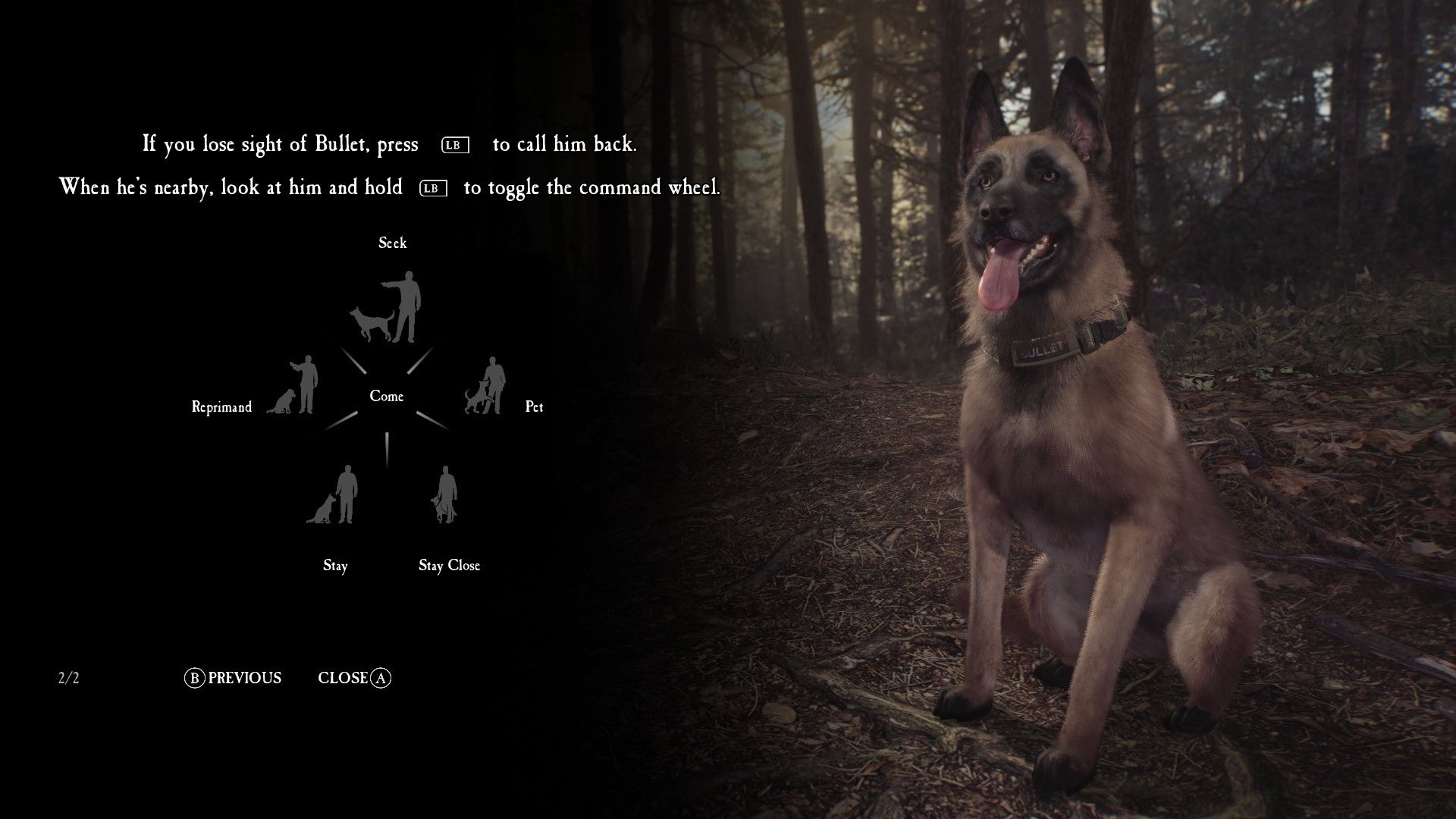 Bullet the dog is your handy helper pup. He finds old baseball caps, follows scents, and barks you in the right direction. There's a little wheel of commands that lets you order him around. Saying "seek" will get him to sniff around for clues, or bonus collectible litter so you can clean up the woods (to get an achievement, horror fans!). But you can also pet him or ask him to stay close to you. It's hinted early that he is also a kind of support dog, and if he gets too far from you it causes stress and anxiety in the form of a wobbly screen. But this emotional leash doesn't really show up much in the game. There were moments when I'd be so far from my pupperpal, I couldn't hear him bark in response to my calls, but Ellis seemed fine.

It isn't long before you realise that barky boy Bullet is really an extension of "press X to do thing". Here that generic interaction becomes "press X to make dog do thing". I appreciate giving the unavoidable gaminess of first-person horror a canine cover story. And the very existence of a dialog wheel for dog-centric chat will be enough to make woofer wuvvers swear fealty to this long-eared good boy. But honestly, there isn't much to him. As a furry button, he is present. As a supporting character, he is a dog. You aren't given much reason to feel attached to him beyond him existing as a non-verbal being who follows you around. A lot of the time, I forgot he was there. Although I will say I never used the "reprimand" command to scold Bullet, because good heavens, I'm not a monster.

So you amble around the forest, looking for clues and chatting over a walkie-talkie radio with the local Sheriff, who's also out there looking for the lost child. You find an old tent campsite and things inevitably go spooky. There are flashbacks, there are hallucinations, there are jumpscares, and demonic bundles of sticks whooshing through the trees, there are moments where you black out and wake up in the middle of the night.

Soon you realise that the forest is playing tricks on you, with insensible twists and turns. You go up one path, down a hill, around some bushes, and find yourself back in the decrepit campsite where you started. The first few times this happened, I couldn't tell if it was the game doing funky looping geometry, or if I had genuinely become disoriented. Which is neat. But the unsettling nature of this gimmick wears off after that, when you realise the forest is basically doing a big game of Snake on the Nokia. 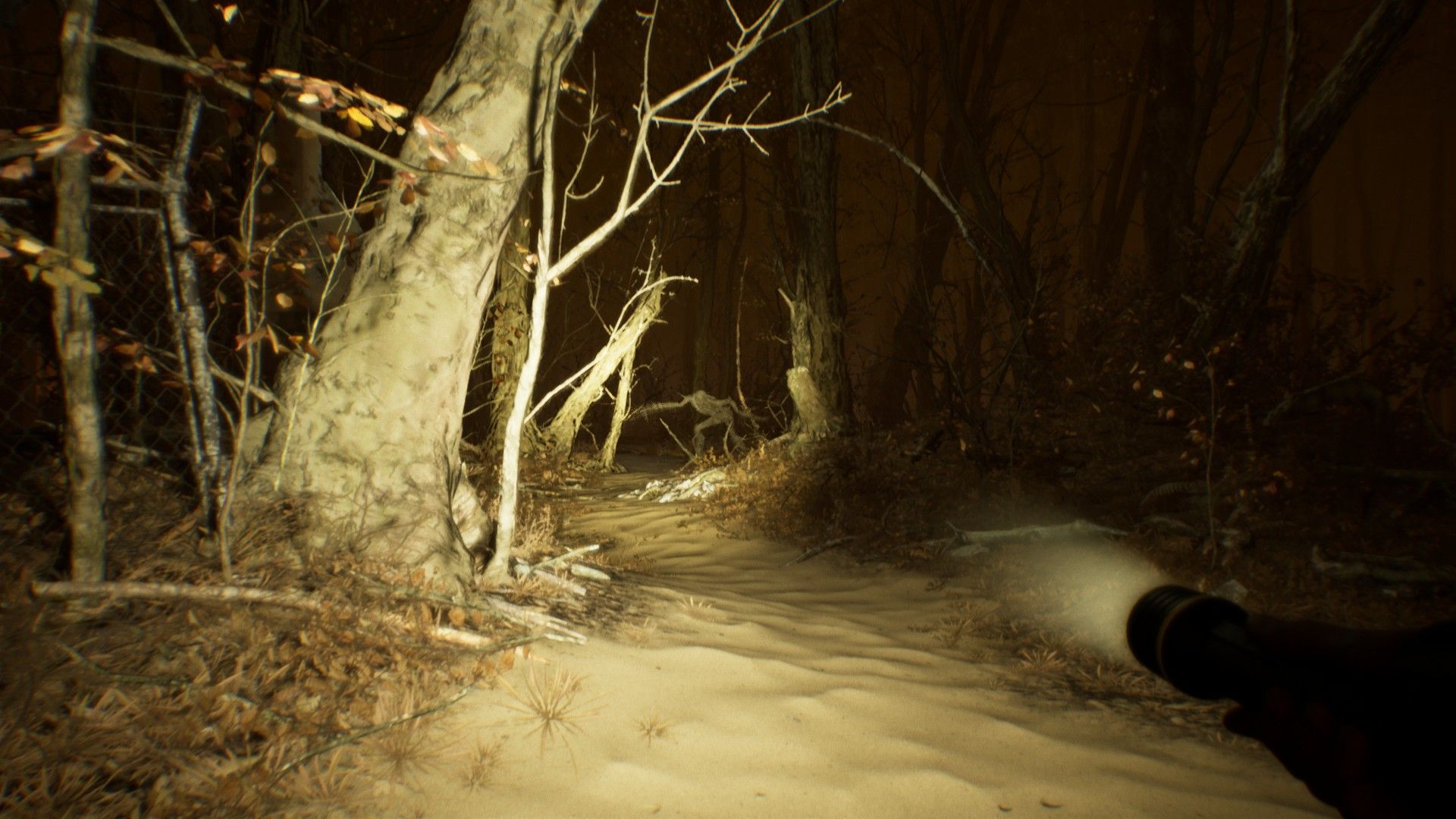 In terms of any antagonistic Witchiness, there are some creepy-bads that I can only describe as stickbundlefolks. They can be fended off by shining your torch-light at them, but they move faster than a whip crack, so you have to step back and watch Bullet the dog as he turns to bark at these demons, then shine the flashlight in whatever direction he's barking. The first couple of encounters, I tried running away, or following their whooshing movements with my own senses. Which only resulted in quick death. But the checkpointing is very forgiving, basically plopping you right back before the encounter. Again, the threatening nature of these monsters wears off quickly, and from this point they only manage to frighten you in scripted moments where they jump out and go "boo I'm a bit of an old tree boooooo".

There are some puzzles of a sort thrown into the forest. One puzzle sees you mucking about with the innards of a car, trying to get the headlights on. Another sees you looking for components for a steam-pressure contraption at a logging camp. It's all very mild, straightforward survival horror stuff, but in a game that is mainly spooking me through jumpscares and twigs, I found these routine maintenance tasks very welcome. The machinery often feels chunky and sim-like, with big buttons to push and levers to crank and fuses to pluck out. It's the same sort of dedication here that elsewhere produces a fully-functioning Nokia, and I want to give that handiwork a big thumbs up, even if the rest of the game disappoints. 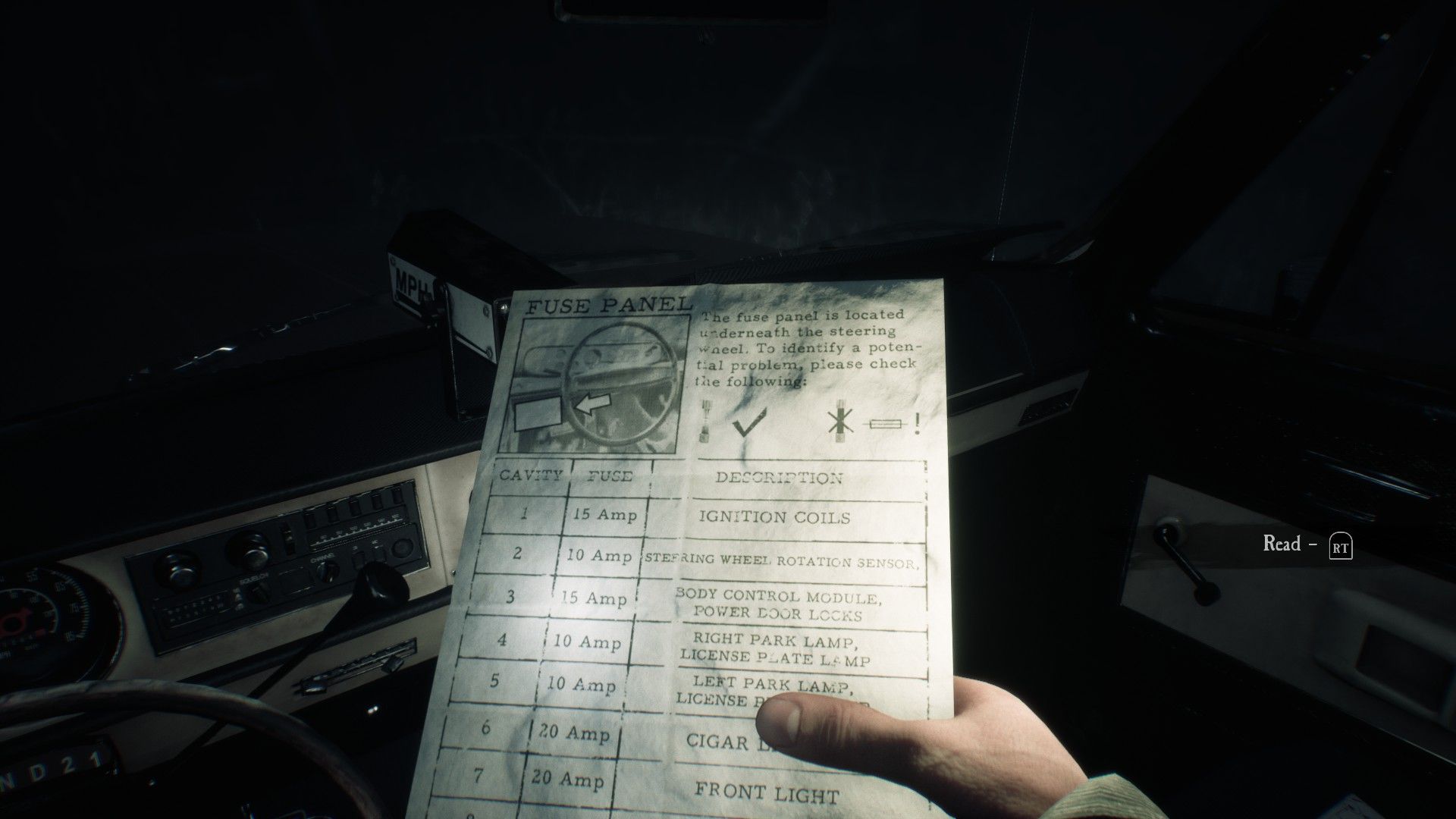 There's also a video camera and some tapes strewn about, in keeping with the "found footage" schtick of the movies. And this ties in to some scripted puzzles about scrubbing through old tapes to alter the environment around you. For example, a fallen tree blocks the path ahead, but you've found a tape in which the tree falls down. You rewind it and look back from the camera to find the tree in front of you suddenly alive and well again, allowing you to pass.

Other environmental puzzles are plain annoying. One scene sees monstrous piles of leaves rolling around in a dense, brown forest floor. A military voice on your radio tells you to run between islands of soil and sand in this sea of autumn, so you can avoid the beasts. But listen, videogame, if you want me to run between safe points, at least do not lock up the "sprint" button for this one scenario. Ellis can run perfectly fine at any other time in the game, why would he not sprint when chased by a leaf monster? This whole section is unscary and mildly annoying to the point of comedy. 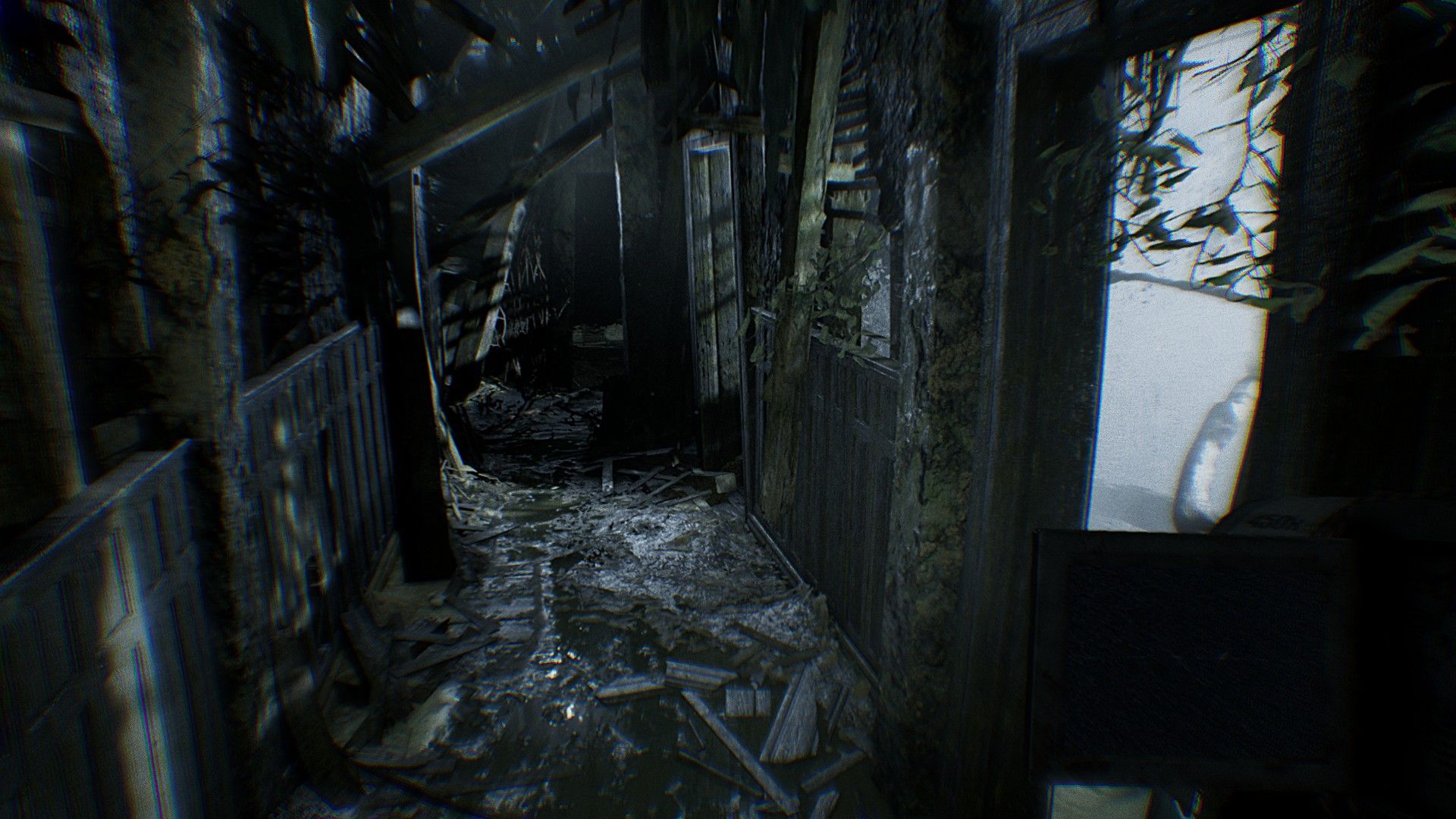 That feeling of naffness follows you through the woods like a spectre, and it affects the storytelling too. Ellis as a character is less of a protagonist and more a grab bag of trauma. The more you learn about his history, the more it feels like the writers couldn't decide on which psychologically damaging life event to give him, so they just gave him a whole bunch. The heavy-handed hints about his military background, in particular, and the PTSD that comes of that, feels less like foreshadowing and more like a complete fore-eclipse. It's very easy to guess the twist one hour in and spend the rest of the game waiting for it to arrive.

This becomes especially grating in the final hour of the game, which has some of the most impressive scenery and geometrical wibbliness in the game, but also feels like an hour of explanation by horror for a story you mostly figured out several chapters ago. Like Ellis, our un-hero, I found I was talking to myself in this final act. "I got it guys," I'd mumble as I avoided the physical manifestation of a psychological terror supposedly tearing me apart. "Let's wrap it up." 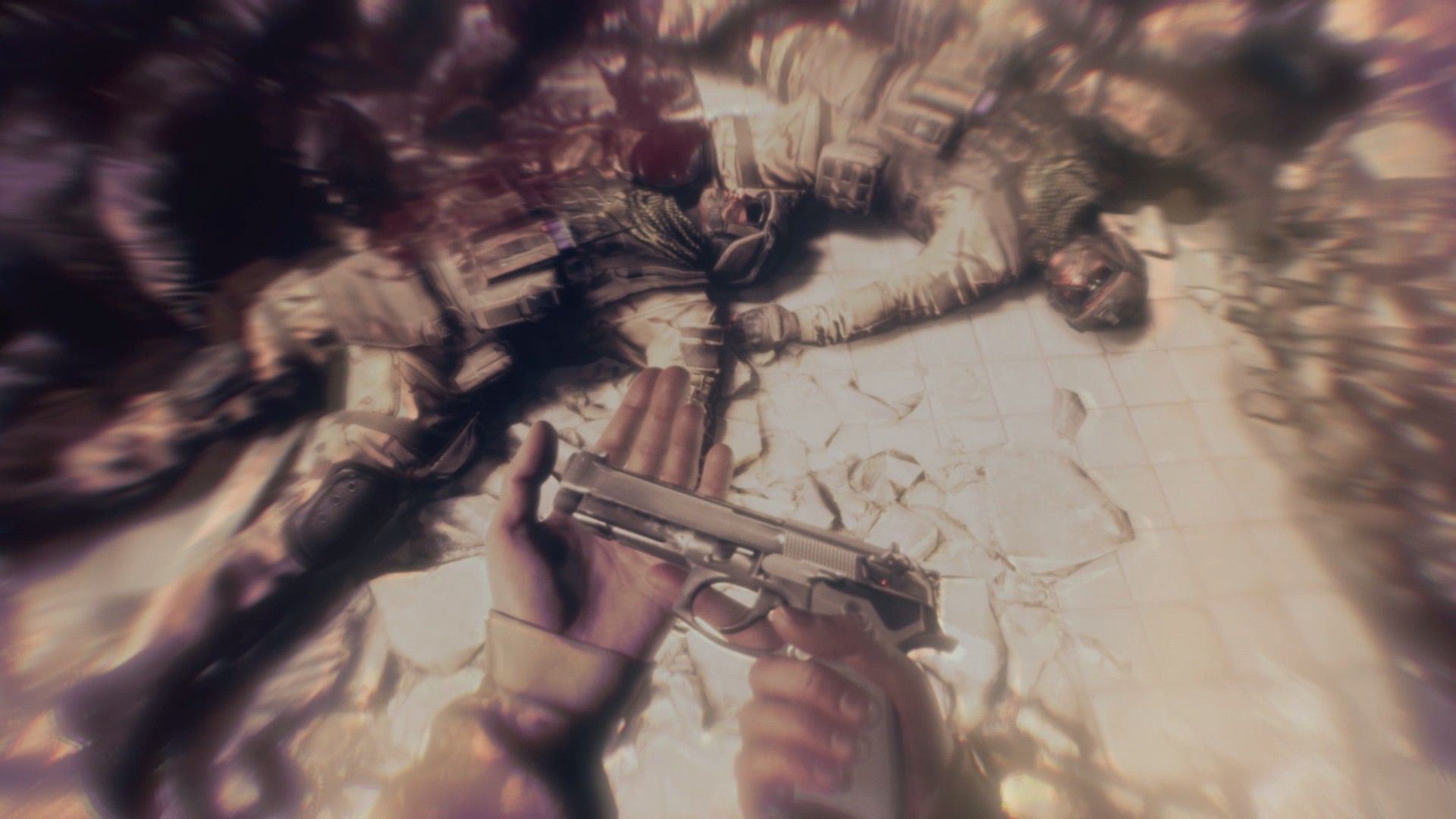 Blair Witch is lumbering and predictable, as horror often is, and the rattling moments come mostly from jumpscares. The rest is a tepid sort of horror. The labyrinthine forest, with all its swampiness, muck, leaves, and turnarounds, is a well-landscaped anti-idyll, and will likely be a good enough setting to lure in a few horror-hikers. There are also undoubtedly Witchy elements that have been completely lost on me, as one of the many who was nonplussed by the shrugging torch-up-your-own-nose summer camp ghost story of The Blair Witch Project. So Blairites (no not that kind) might get more spook for their buck. But, for me, it was a mildly unsettling meander through an old wood, that simply reminded me I'd rather be playing Snake.