If you click on a link and make a purchase we may receive a small commission. Read our editorial policy.
Developer: Ninja Theory
Publisher: Ninja Theory

Bleeding Edge is a third-person 4v4 brawler with a line-up that includes a woman who turns into a motorcycle, a snake who inhabits a zombie, and - soon to be introduced - a dolphin in a mechsuit. There's a feathery, mechanical raptor-lady. There's a fire-breathing goth. There's a grandma, who is also a witch, leashed to a mini hot air balloon. Most of the combatants are charming, inventive and memorable, but I never want to see any of their stupid faces again.

All the charm in the world couldn't stop the combat being pants.

Let's linger a little longer on the fighters, rather than the fighting. I want you to get properly introduced to these characters, before I tell you how they've been squandered. And when I say the characters, I really mean the character designs. Because while there are snippets of lore tucked away in their bios, all you really need to know about these people is that they're cyborgs who like beating each other up in a fight club for transhuman misfits. I can get behind that.

One of my favourites is Makutu, a New Zealand-born beefcake with a rotating sphere for a torso. He has a hoverboard like a surfer, and makes wave-like motions with his hands as he rides it. He is relentlessly upbeat, and if you hold down the mouse button he'll repeatedly slap enemies at blistering speed, while waddling forwards like a crab. Also he can turn into a ball. There's a lot going on with Makutu. 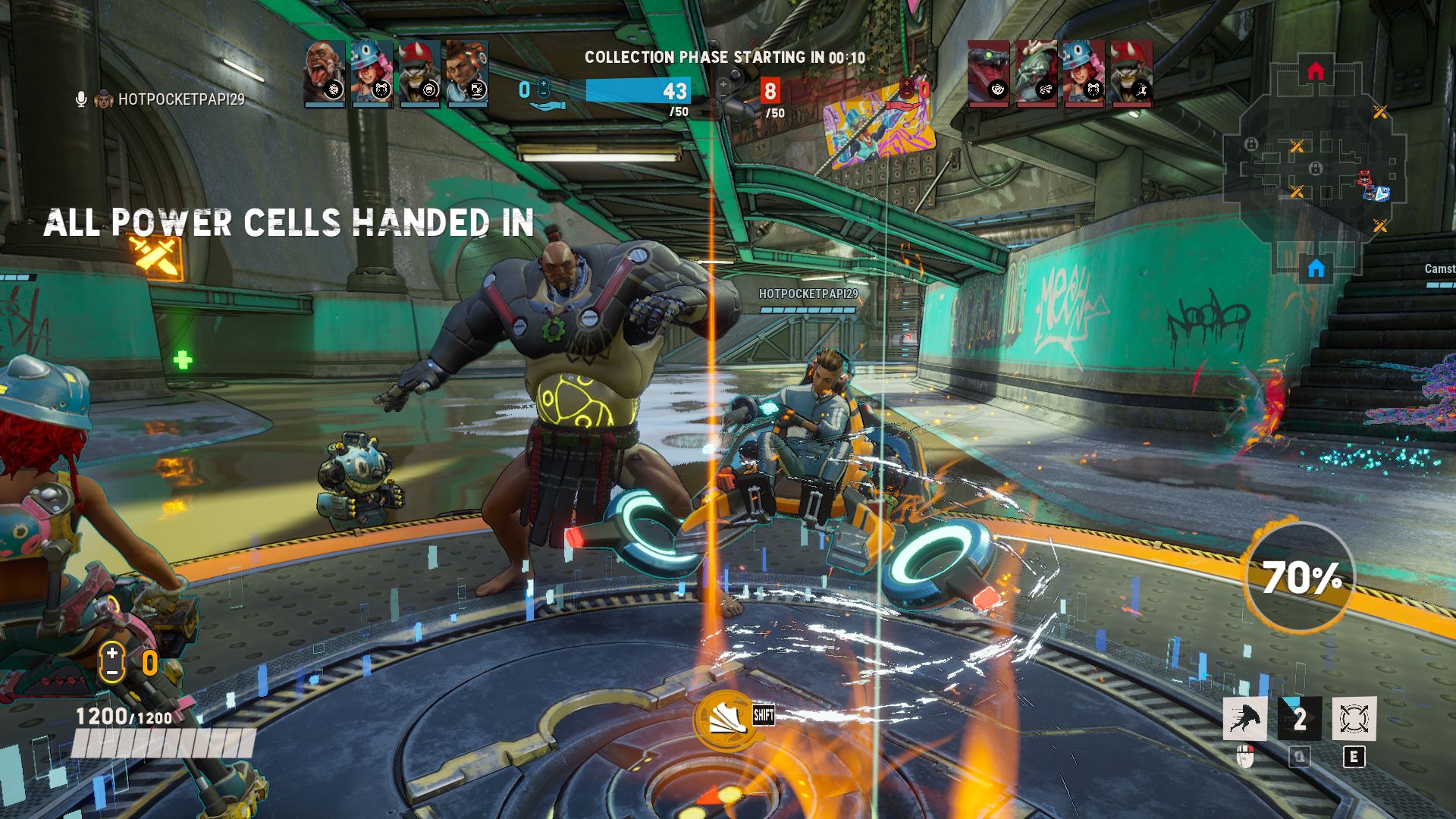 He's a conceptual triumph of character design. But look, the cracks are already showing. Because ability-wise, he's a cross between Reinhardt and Lucio from Overwatch, with a charge attack, and a buffing aura he can toggle between speed and healing. Makutu isn't the only character with an analogue in Overwatch, either. Motorcycle lady can yank enemies in towards her like Roadhog, while another support character can summon a wall like Mei's. I get that it must be hard to come up with genuinely new ideas for abilities, but for all their novel appearances, many of these characters are working with well-worn tools.

There are two modes, which either send you off to capture points, or scrounge for power cells, which you deposit to earn points for your team. The combat reminds me of PVP in MMOs. It's got the same emphasis on teamwork, and managing your abilities through hectic fights. There's no aiming: ranged characters simply hold down their attack buttons while locked onto an enemy, and I can't stand that. Clashes between ranged characters end up being fought with dreary inevitability, with both of you firing away and launching your abilities the moment they're off cooldown. It's too simple for mind games, and well-timed dodges don't make as much difference as they should. 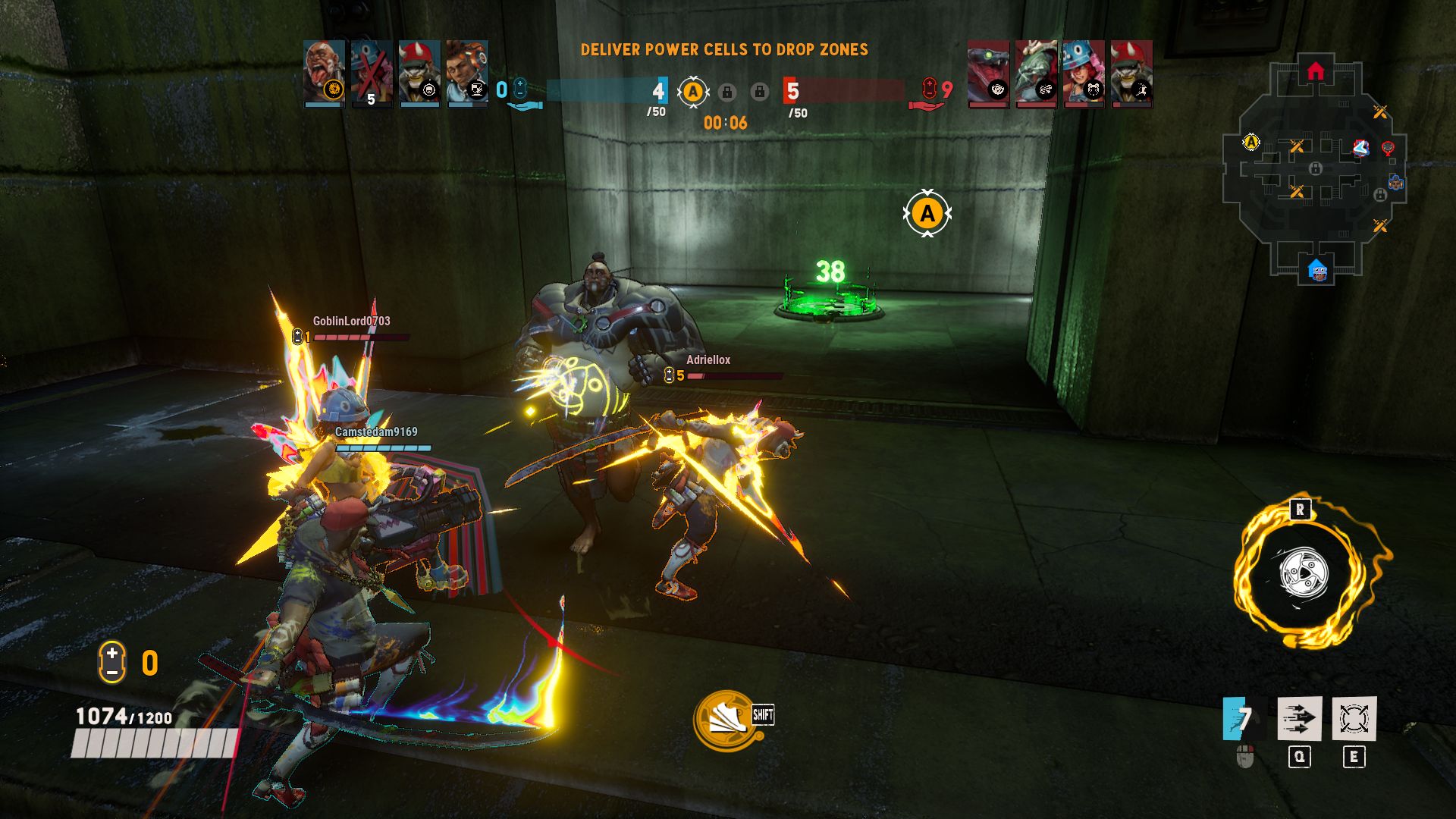 The melee characters are a bit better. Close quarters combat revolves around stunning your opponent with a chain of blows, which they can avoid by dashing away, or parrying at the last second. It's achingly one-dimensional compared with something like Mordhau or For Honor, though, and what little nuance there is gets lost in the chaos of a teamfight. Unfortunately, nearly every fight is a teamfight.

The winning team is always the one that sticks together. When you're playing with people who realise this, matches congeal into messy blob-offs that reward basic rule-following more than than precision. Rules like "focus on the same person", "pick off the healers", and "don't have multiple people get caught by the same stun". It's basic stuff, but muddied by the way most characters can dash, meaning they flit about the screen like a shoal of coked-up minnows. It makes teamfights much harder to read than in games like Dota 2 or Battlerite, where the top-down perspective already helps you make sense of things. 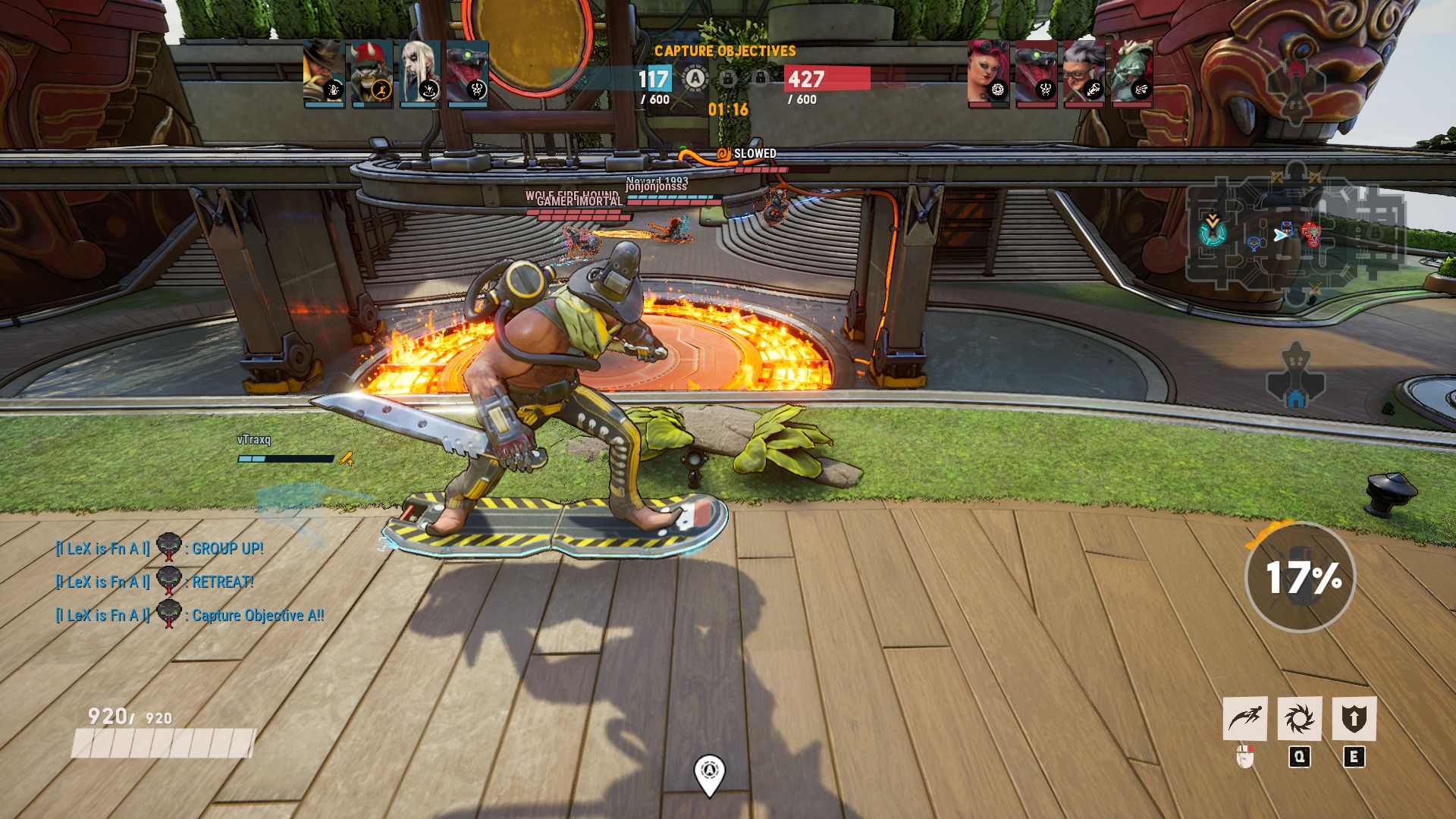 If you're not with your team, then you're probably doomed. With so many stun abilities in the game, it's easy for the enemy to lock you down. If you're being wailed on by a group, it means you were out of position. But that doesn't stop it being frustrating. You wind up feeling helpless and impatient, especially when playing with uncoordinated randomers, and there's less room for individual heroics than in other team-based games.

It's a shame, because the maps are almost as interesting as the characters. You've got trains ready to whack you down, capture points situated on conveyor belts, and booby-trapped power cell hand-in points that can be activated to swathe an unwary enemy team in fire. Many areas play around with raised platforms, letting characters with jump abilities outmanoeuvre their enemies. But all this doesn't begin to do enough to make up for the failings of the combat. 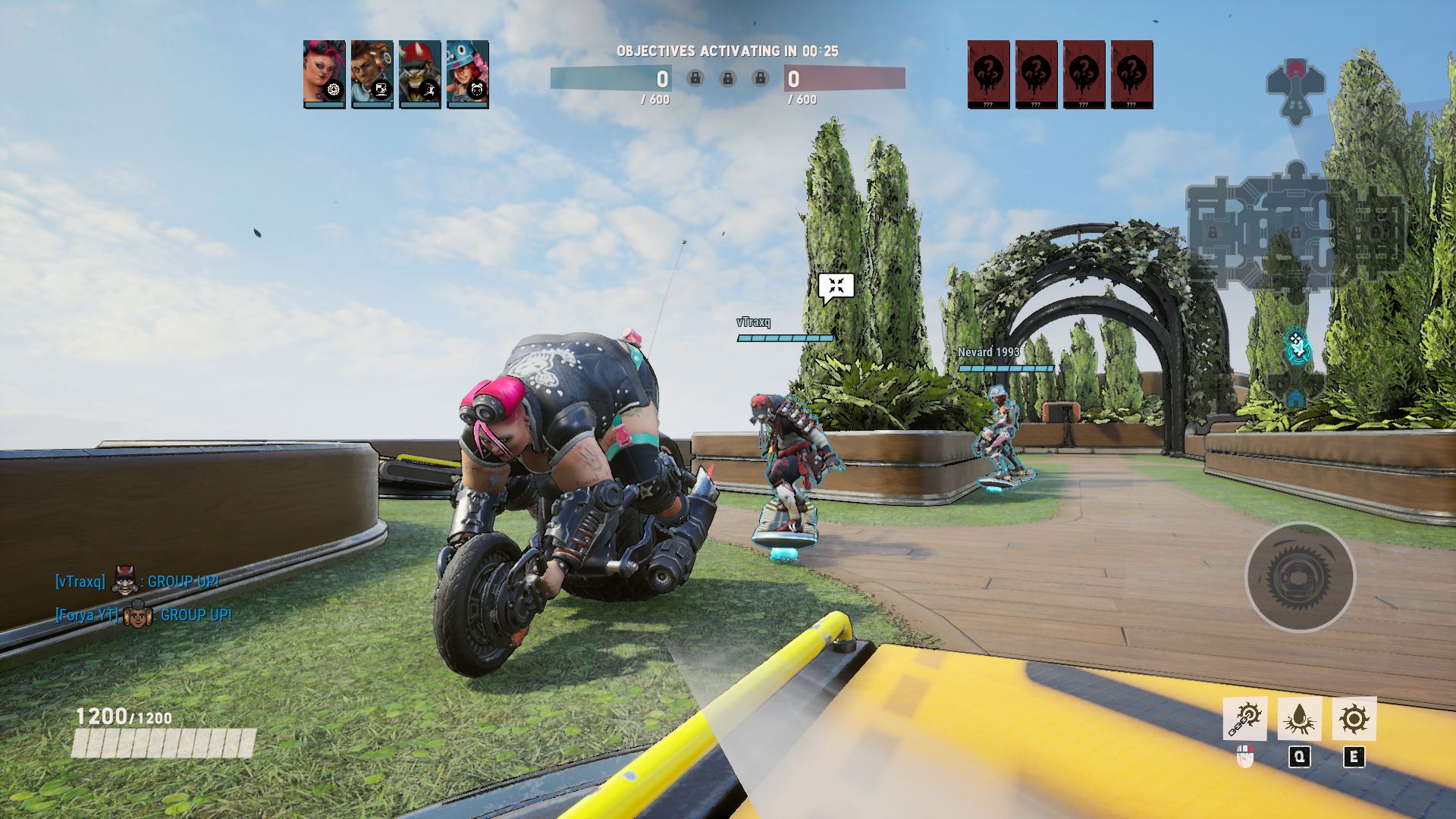 The basic act of hitting something doesn't feel quite right, even when you're whacking someone with your massive motorcycle hands. There's this feeling of disconnection, some of it coming from the way your enemy can blink away at speed, and some of it, probably, from lag. A recent patch claimed to address that, but it doesn't seem to have done much good. Hopefully that will be ironed out further down the line. But even if it is, I'd steer clear of Bleeding Edge. The characters may be inventive, but everything else is bleeding out on the floor.