Hearthstone's new Ashes Of Outland expansion is out this evening, and having spent a couple of days last week playing with the new card set, I can confirm it's really, really fun. Completely ridiculous, as is increasingly the case with Hearthstone, but undoubtedly a solid expansion - and in my opinion at least, more fun than any of last year's three.

Obviously, the headline addition to Ashes is the new Demon Hunter class, and its angsty purple frontman Illidan. To get the measure of Hearthstone's first new playable class since its launch in 2014, I asked Blizz if they could sort me out with a preview build of the new expansion, and they responded by creating a personal hell for me: a server with room for only two people, where I would be magically imprisoned, like Illidan himself, until I had learned the secrets of the big purple man. The games that followed would involve an awful lot of magical green fire, plus a swarm of albatrosses and more than a few self-replicating tyrannosaurs. 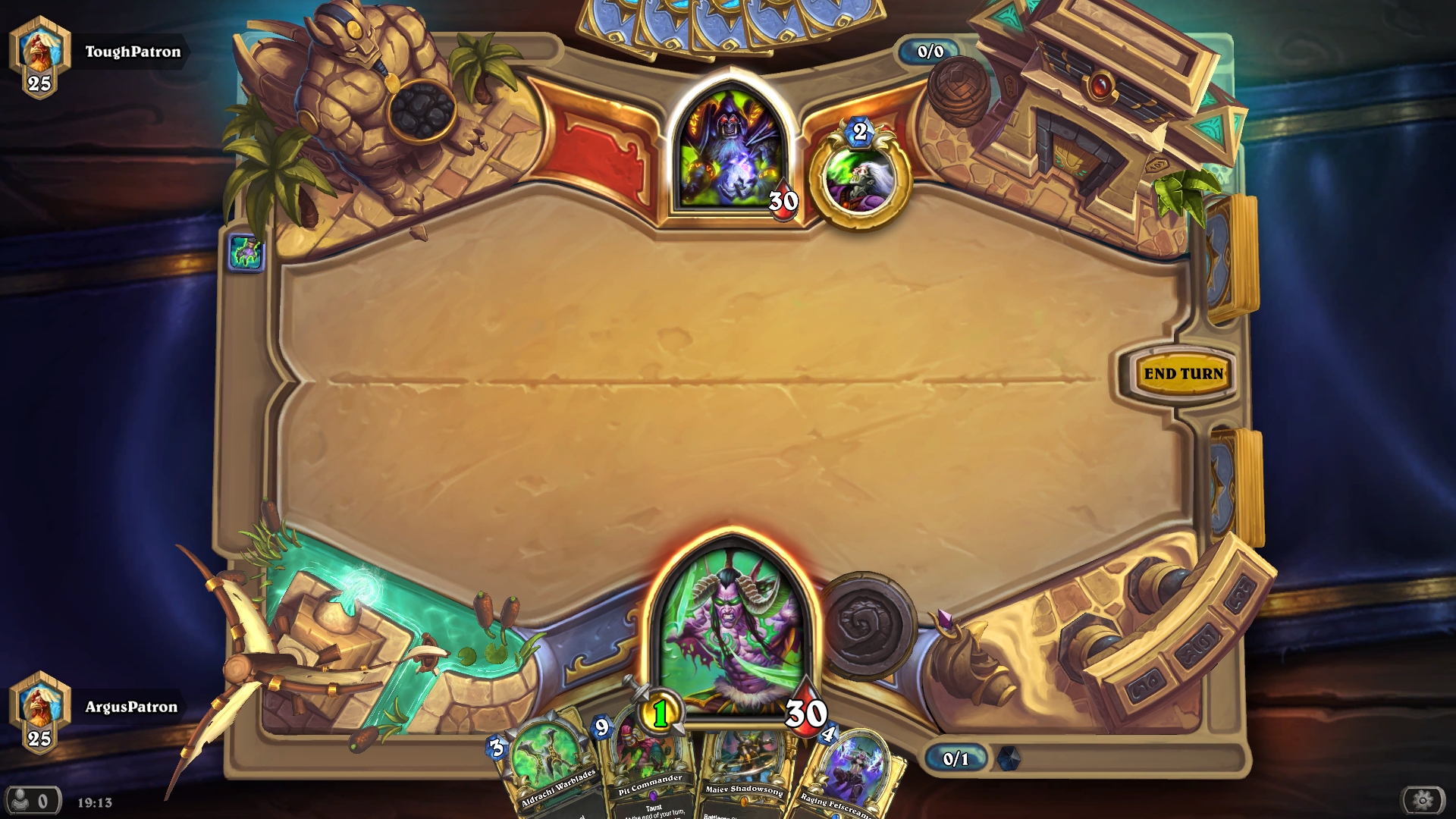 Joining me in this strange pocket dimension was my pal Adam, and as we set up for our test games, we decided on a narrative of sorts. I would play as Illidan, defending my digital prison from the Warlock Gul'dan, played by Adam. It was a classic set up: good-ish antihero demons versus naughty demons, with lots of potential for weirdness. Under the terms of our contest, Adam would be allowed to make his Warlock deck using any standard set cards he wanted, while I would be restricted to using one of Illidan's three default starting deck recipes (although to be fair, two of them make use of some pretty mega legendary cards). We thought we'd have a best-of-seven matchup, but after the Demon Hunter's fifth win in a row, we released he was... quite powerful. 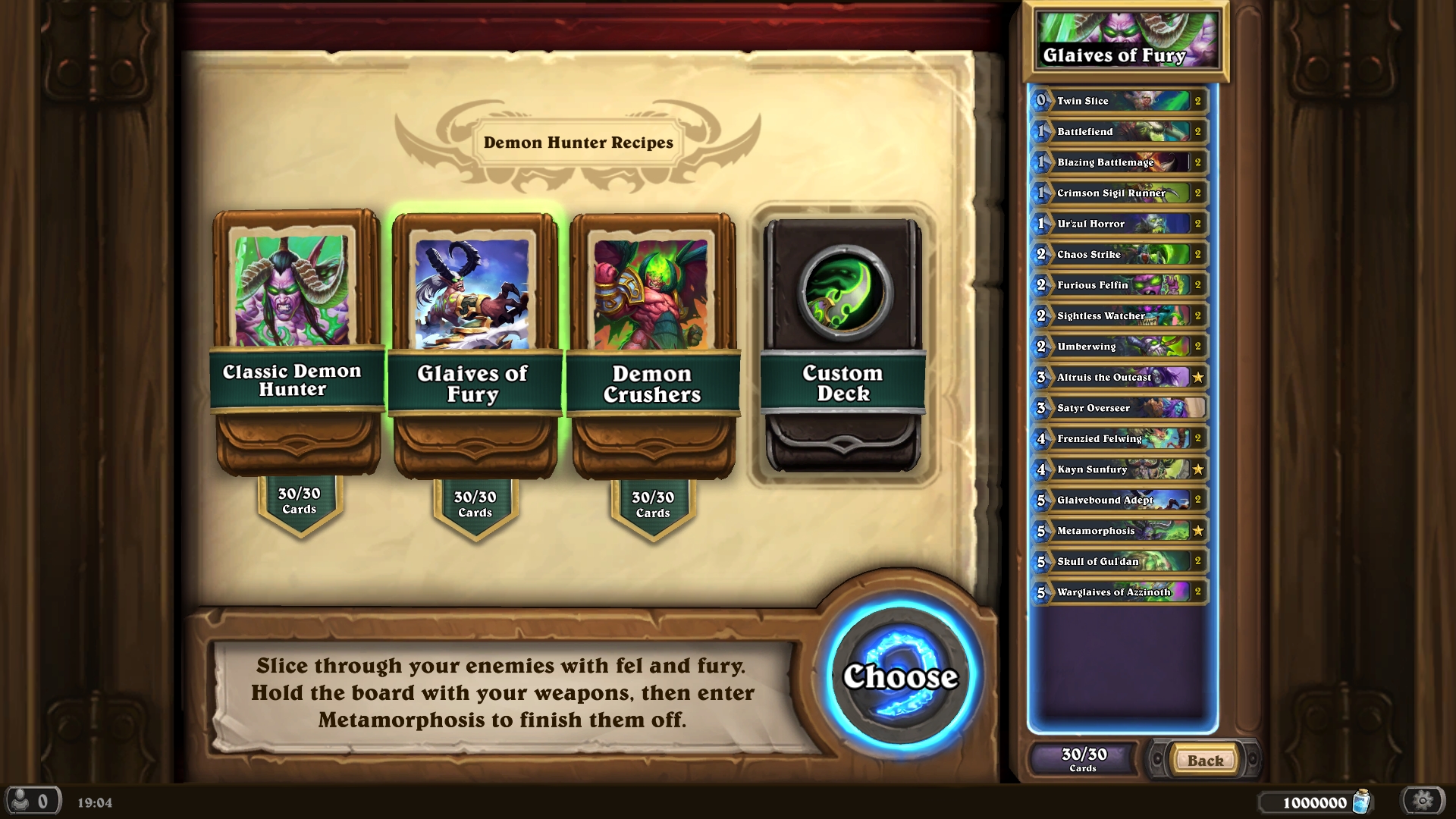 The Demon Hunter class, as Adam put it, is "a bit of a brute". Mostly, I played it as a face/rush deck, built to batter an opponent directly before they can get a chance to build any late game momentum. Illidan's one-mana-cost hero power ensures he's never short of an opening move no matter your opening hand, and you can ensure good tempo even if your mana curve pretty much starts at two. Plus, with a lot of cheap cards that focus on weapons damage, weapon synergies, and flooding the board with low-cost gits, it's easy to overwhelm most foes early. Plenty of lifesteal effects will keep your big purple lad in good shape as he siezes control of the board, and if you can keep it, you'll likely be able to beast your opponent into the ground with burst damage before they can really get their deck mechanics going. 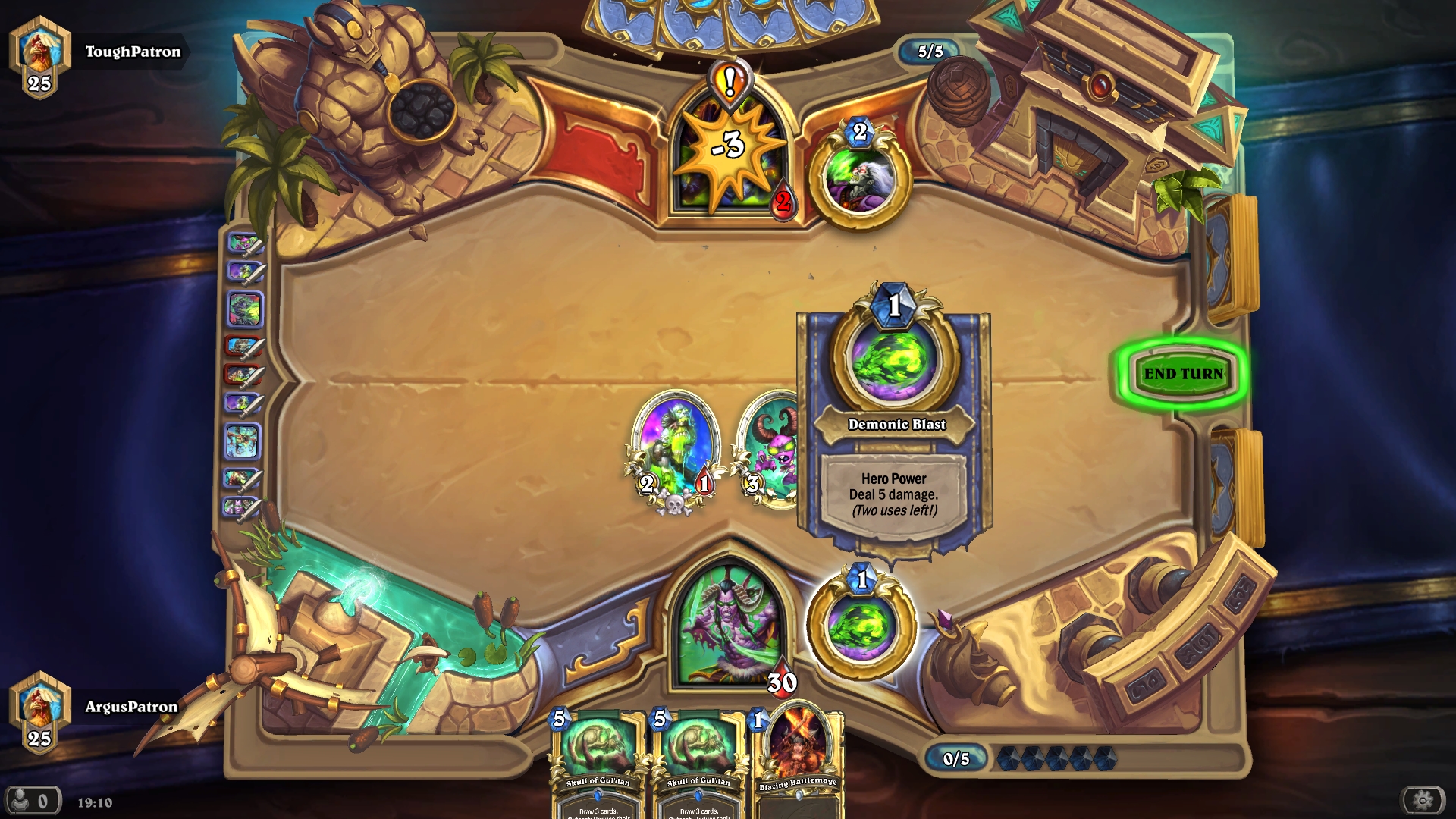 As far as we determined, the Demon Hunter's main weakness is fatigue. While they've got access to a good amount of card draw tools, they don't have many ways to replenish their decks with new cards. Because of this, any opponent capable of weathering the initial monstering with plenty of board clears and taunts has a decent shot of knackering Illidan in the long run. Still, it's no guarantee - some of the Demon Hunter's late game cards are pretty hefty, and really help you keep up a gruesome level of tempo long past turn ten. And then there's this guy, who's clearly Batterhead's more aggressive drinking buddy. Look at this ridiculous situation, for example, which I will remind you came about using only one of Illidan's default deck recipes: 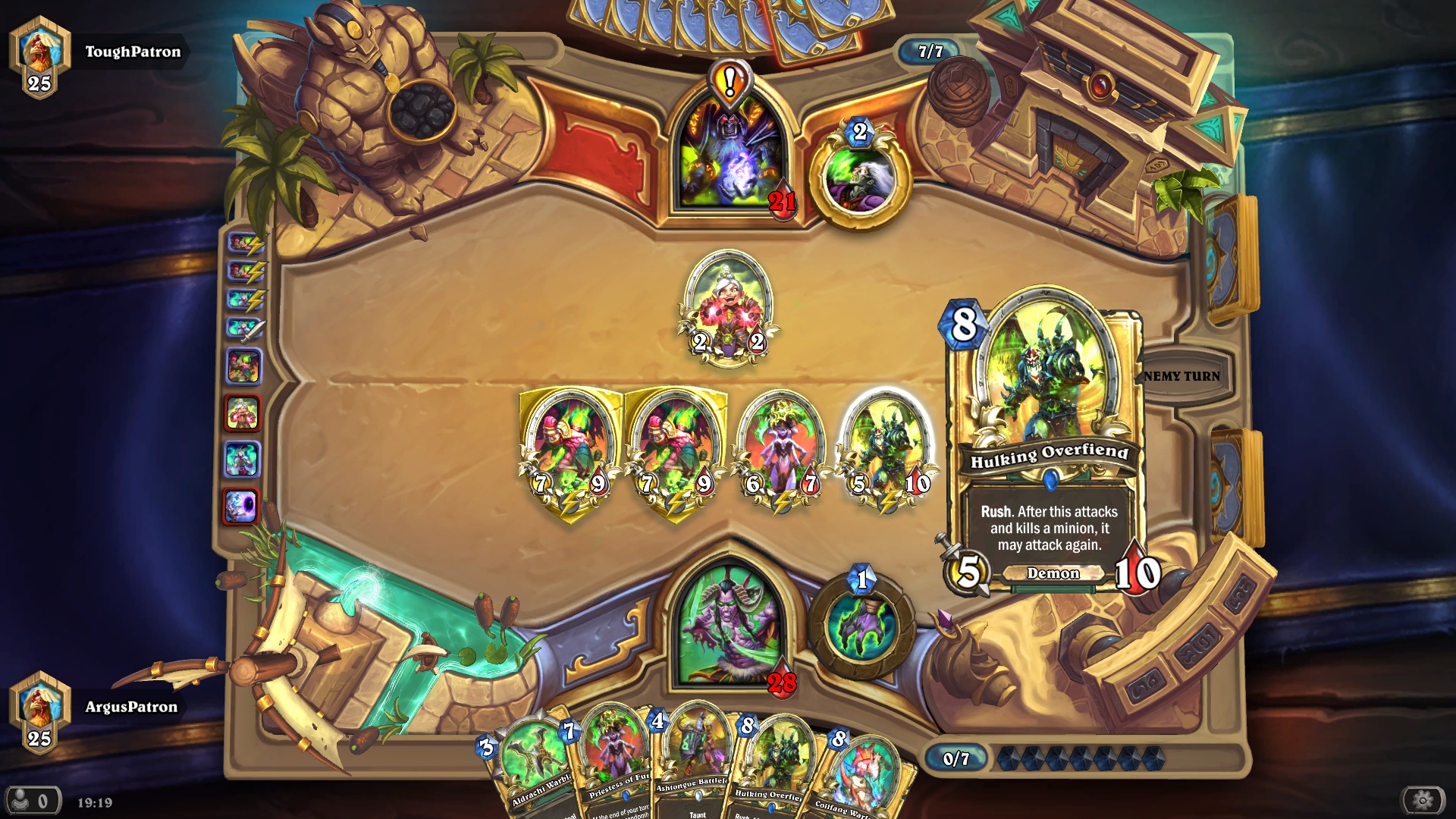 After Gul'dan got mangled for the umpteenth time in a row, Adam and I decided to abandon the terms of our original battle, and settle on a new plan: we would each take it in turns to play the Demon Hunter - still restricted to the standard deck recipes - while the other person built a ludicrous meme deck from any class (no netdecking allowed), in a bid to counter it. We tried some fairly hilarious, but disastrous stuff: Adam had a good try to get a Thief Rogue deck going in a world without Tesspionage, but made it as far as turn six before getting fel-fired into a pile of ash. Meanwhile, I had a go with the Mage class's reinvigorated "no minion" archetype, but just couldn't keep Illidan's knives out of my face for long enough to make the magic happen. Every game with that deck pretty much boiled down to desperately freezing Illidan's demon hordes while I fished frantically through random spells, until the inevitable ganking: 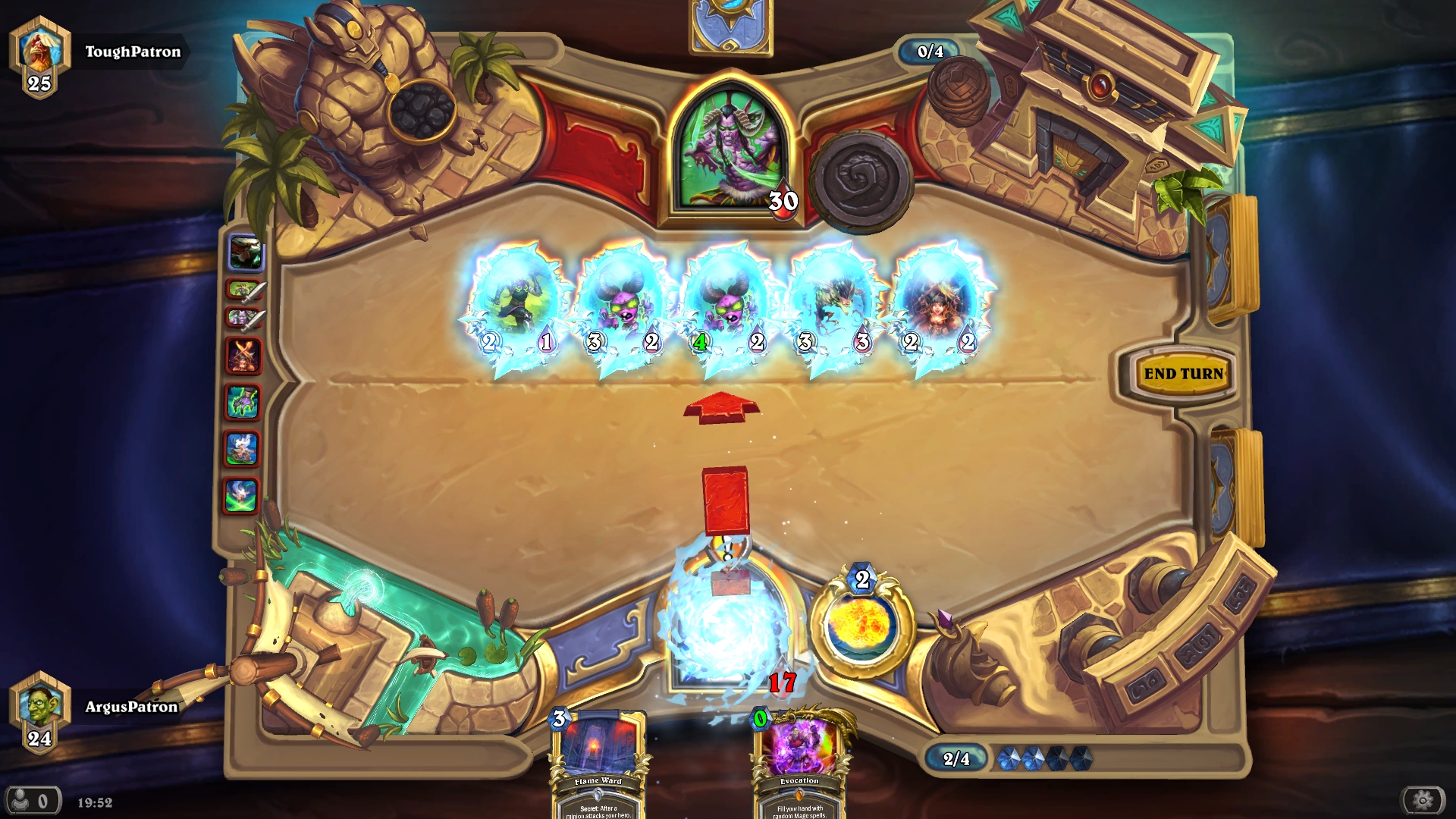 Still, in the end, we did find two decks capable of giving Demon Hunter a good hiding, even in the limited time we had - powerful as the new class is, it's not without its weaknesses. And with more time to experiment when the expansion launches tonight, I'm sure we'll find more. One of these decks was an updated version of the majestic Albatross Priest, a deck which first spread its wings in Descent of Dragons, and which I'm sure Alice Bell would approve of.

Albatross Priest has a blissfully simple MO: replicate as many albatrosses as you can, until you've filled your opponent's deck with the useless bastards, and they're drowning in Coleridgian hubris. Illidan is particularly susceptible to a good 'trossing, as he's reliant on bringing out big toys from his deck quickly, and he can't do that if it's full of big shit birds, can he? Albatross Priest uses a lot of ancient-Egypt-ish resurrection cards from the Saviors of Uldum expansion, but has some powerful new tools in Outland: Psyche Split and Apotheosis, for example, allow you to make your albatrosses bigger and more healthsome as you endlessly photocopy them.


But the real star of the show is the almost astonishingly overpowered Reliquary of Souls. This beast of a card seeds a massive, lifestealing 'prime' version of itself in your deck when it dies (each class has its own take on this new mechanic), and so gives you something else to use your many, many copying cards on if you don't happen to have a 'tross to hand. Having a load of lifestealing 6-attack taunts in your deck really helps with survivability against the Demon Hunter onslaught, and ensures you've just got more cards to draw than Illidan, even if you don't get many big birds off.

Adam also found an Illidan-busting deck, however. It was a Hunter deck, and it couldn't have been more different to my solution. I don't know if there's a proper name for the archetype, but he called it "dinner at the Beast Row", and it worked on the principle that the best form of defence is a good attack, aiming to outdo the Demon Hunter at its own board-presence game. The Beast Row is a handbuff deck, like the ones from the Gadgetzan meta of 2016, only it's actually good this time. Almost too good, if I'm honest. It only has a few, very powerful minions (King Krush is arguably the must-have), and uses some powerful buff cards from Outland - particularly Scrap Shot and Scavenger's Ingenuity - to get some big nasties lurking in your hand. A couple of cost reductions with Scarlet Webweaver, then a bit of photocopying with Ramkahen Wildtamer and Hunting Party, and... well. This happens:


Now, bear in mind that all the above was the result of just a single day of experimentation, and I think I'm safe in saying that all the decks we put together were far, far less than optimal. Once Ashes is released this evening, there's going to be millions of people out there finding even more ridiculous ways to win games, and I fully intend to be one of them. I'll report back again once I've had a chance to develop some more, even sillier ideas I've had. And in the meantime, you can always drop by at our sister site Metabomb, where people who - unlike me - are actually good at Hearthstone, will be sharing recipes for the best new builds.