At the risk of this becoming that episode of The Simpsons where they see inside Lenny's house and he says "please don't tell anyone how I live", I'm going to share some pictures of my bath with you.

That header picture is not me, or my bath, by the way. I wish I put that much effort in when I have baths. It is the model photo on the store page for some Vampire: The Masquerade themed bath bombs I got sent (disclosure: for free, to try out). Bloodlines 2 may have been delayed to next year, and had some surprising staff changes, but for Halloween they threw up a bunch of clan-themed key rings and vampy bath bombs, because vampires love baths.

And so do I! Crohn's disease is triggered by stress, so if I get too stressed my insides start eating themselves, and baths are both good for reducing stress, and for reducing the pain of the chronic bellyaches I am cursed with on a near daily basis. The bath has been in heavy rotation recently.

And, actually, I bet a load of vampires would like baths, right? Lying about in warm water, probably wearing floaty, diaphanous clothes for the aesthetic of the thing, lighting loads of candles, and so on. Myself, I favour a much more utilitarian approach to sitting in water that has a thin layer of my own human scum on top - but I do really like bath bombs and bubble bars. They smell nice! I mean, my bathroom doesn't have a window so you have to keep the fan on the whole time, and the shower curtain has blue fishies on it. It's probably not conducive to the kind of immortal bloodsucker vibe our glamourous friend is giving us up there. But still.

The bath bombs I got were the Kindred's Kiss ones. You get three for $11, and they look like this: 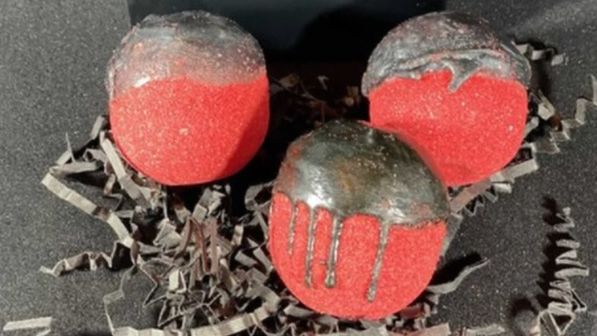 That picture is also from the store page, but they do actually look like that. Each is about the size of a jumbo gobstopper, or a sleeping hamster. The scent is dragonsblood, which is not actually a ridiculous affectation to play into the whole 'oooh, you're gunna bathe in blood!' theme, but the name of a resin that's actually a popular scent for incense and things like that. It's a nice smell - earthy but a bit sweet, and not overpowering. I am glad they did not try and make it smell like actual blood. That would be super weird.

On chucking one of these bad boys into my bath, though, I immediately realised the problem with making a bath bomb that is explicitly meant to look like blood, and that is that, until it has stopped bombing and coloured the whole bath, it has a very distinct vibe. A vibe that I can only describe as... menstrual. 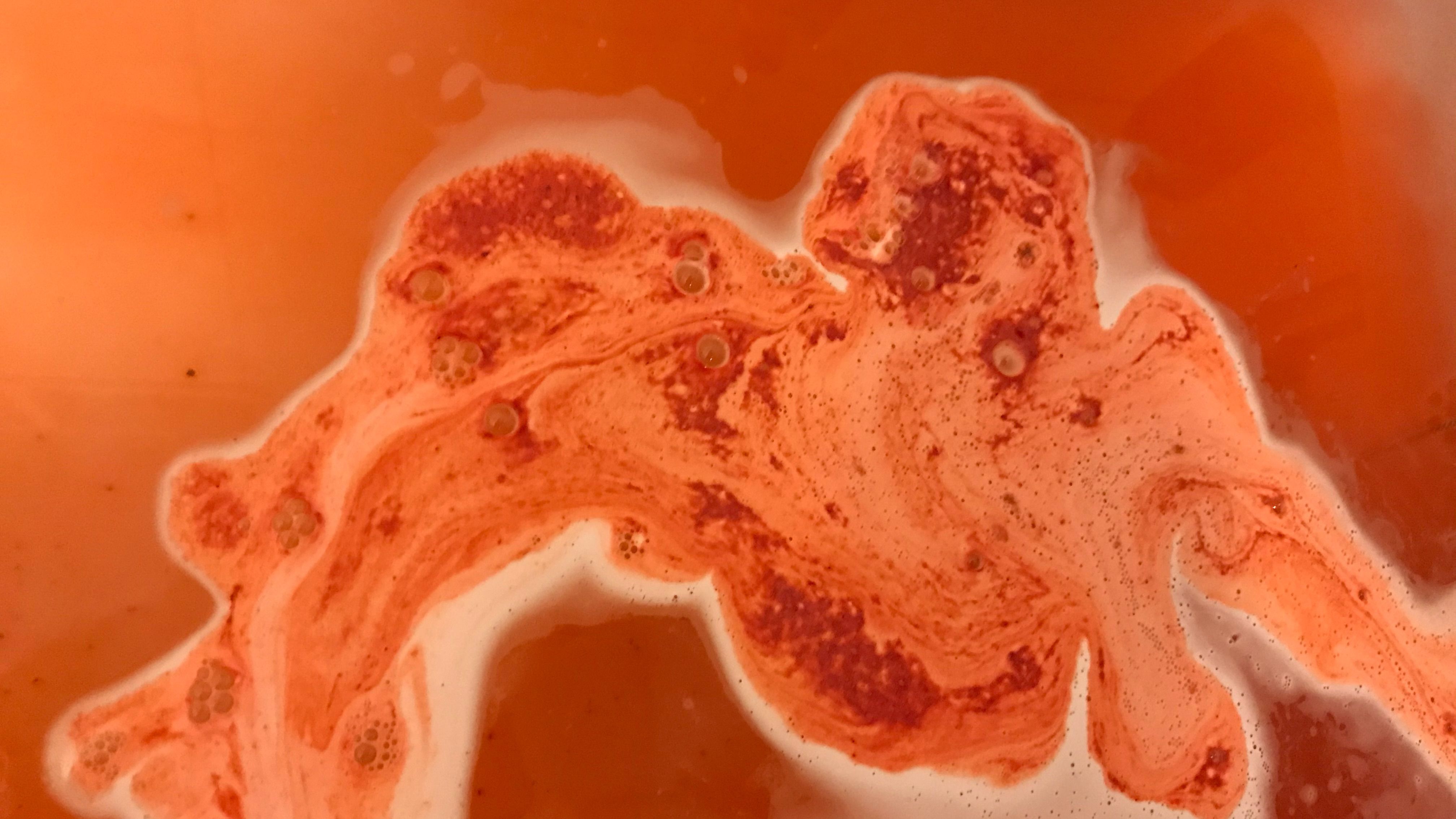 Fizz fizz. It definitely felt a bit clinical, like I was observing some kind of experiment on samples of internal tissues. I kept thinking about terms like 'spongy lining'. I showed the picture to everyone at work and Nate said it looked like what a scientist would see looking down a microscope at a sample. (Graham asked if I am a vampire now, because he is a joker). Like, I would not recommend using this bathbomb if you're also going to be shaving, because if you nick a vein you won't notice until after you've ruined your towels.

When it's all done fizzing around, though, it looks like red water. There's some black glycerin to extend bubble life, and that does actually help take it down from 'tinned cooked tomatoes' to 'idk, would look like blood in a cosplay photoshoot maybe?'. On the other hand, the glycerin on mine did not actually melt away and I sat on it and actually thought there was an actual slug in my bath. I therefore question the ultimate benefit.

This is what it looks like when it's finished. I am doing bathstagram hands - a word I have invented for the purposes of this post but probably also exists in real life (although I'm too scared to check). Like, I imagined, "What if those makeup artists who stand around pouting and doing glam jazz hands while looking off camera, also ran a channel about bath bombs?" I bet about 50% of Instagram MUAs are Toreadors, tbh.

Honestly, once you get over the bodily fluids vibe (which is after all a stated premise, I think), this is a decent bath bomb. It smells really nice (during the night I kept turning over in bed and thinking, "Wow, something smells nice - oh wait, it's me!") and it didn't stain my bath at all, despite being bright red. I can't make a convincing case for you to not buy it; I also can't make a convincing case for you to buy these over bath bombs from a store that specialises in bath products, but that aren't a tie-in to a World Of Darkness property. I accept that spaffing money on bath bombs specifically for vampires is a pretty vampire thing to do, though.